Contact Sheet is Document's newest weekly installment on the stories behind the images shaping our visual culture in the photographer's own words.

“Joe was someone that I met on the street. He looked pretty much like the way he looks, here. I ended up spending three years photographing him. What intrigued me about him was that he was in a transitional time of his life—going from a teenager to a young man. That resonated with me. I was in my early 20s, and I had just moved from London to New York and was in a transitional growth period of my own.

“He was such a fascinating character. He was 14-years-old when we first met. He had a very particular style. He was very interested in the way he dressed and the clothing he felt represented him. He was very fixated on various subcultures. He knew a lot for being so young. He also seemed a lot older than he was which struck me and inspired me. He would tell me things I didn’t know about. He would say: ‘’Have you seen this film?’ and I had never heard of it, and I’d feel very impressed this young teenager has such a broad spectrum of interest. I’d walk away thinking ‘Oh shit, I should check this out, this teenager knows about things I have no clue about.’

“Documenting someone else going through that transitional period is almost like you’re relearning what it meant in your own time. That’s always what photography has been for me, gaining an understanding of someone and therefore getting an understanding of myself as it’s a reciprocated journey when you’re taking images.

“This was one of the first times that I started experimenting with colour film and was trying to learn to use a studio environment versus an external environment. You can actually see there are a few mistakes on the print. The image is somewhat damaged, but I like the fact that it’s not perfect. There is actually damage to the negative, and there’s damage to the paper.

“The photograph reminds me of a time of experimentation. It reminds me of a time of growth, of becoming a photographer. I think it’s important to look back sometimes and take note of an image that maybe reflects more than just a photograph. I still think that image is one of the best photographs I’ve ever taken. When you’re younger, you’re a bit more free. You can afford to mess up. You can afford to experiment and try things out. I have to look at a picture like that to remember to keep making mistakes because that’s how you progress.”

Andreas Laszlo Konrath is a New York City-based photographer, who has regularly contributed to Document Journal. 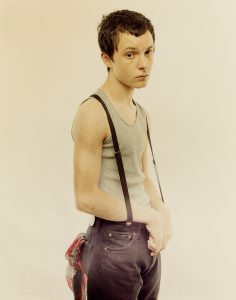