As told to
Joshua Glass

The icon of film, fashion, and music shares stories of her life with the late musician in Document's Fall/Winter 2016 issue.

I first met Serge during a song test for “Slogan.” When I got to the studio, I could hear Marisa Berenson reading dialogue [for the role]. She was quite perfect, and I could imagine Serge’s annoyance to have me, an English girl who couldn’t speak French. I was very shy and he seemed sarcastic. I think I said, “Why don’t you ask how I am?” And he said, “Because I don’t really care.” I’ve told this story so many times I don’t know if it’s really true! He was very elegant, though. He saw that I was stuck on some of the words, and he whispered them to me. Then when I started to cry, which I did very much because I had quite a lot to cry about—John Barry had left me and I was alone with my daughter Kate—Serge thought that was really disgusting: to mix my private life with the movie. I didn’t think I started off on a very good foot but, on the other hand, he didn’t quite veto me, and when I went back to England I wasn’t sure if I’d gotten the part or not.

Then there was the May uprising of 1968, so everything was pushed back for a month; nothing could be done because of the student riots in Paris. Eventually, [writer/director] Pierre Grimblat rang me to say that I’d been cast. I got on a plane and arrived in Le Bourget with Kate. We shacked up in a little hotel, Esmeralda, which was next to Shakespeare and Company in the 5th arrondissement. My brother [Andrew] was with me, he was working for Stanley Kubrick’s film on Napoleon. He took my daughter in the daytime while he went off investigating what locations they could use to film—you know, [Château de] Malmaison—and I was free to film with Serge, who I thought was quite aggressive from the beginning. There was an instance where he was sitting in a bathtub with an enormous pair of trunks, which were red, white, and blue, if I can remember right, and I had to sit on the corner of the bath, with, as per usual, nothing on. He looked up at me in the rather sarcastic way that he seemed to look.

One night, Pierre fixed up a dinner for the three of us and then slipped off like a gentleman. I was left with Serge alone at Régine’s nightclub, and I asked if he wanted to dance. He said no, but I pulled him onto the dance floor anyway for a slow song, and he stepped on my feet. I just thought, “My goodness, everything that I thought was him being sarcastic or dandyish was actually him being terribly shy!” From there we went to La Calvados, where there was a group of Mexican singers, and, oh, Joe Turner at the piano and they did four-handers together. He [Serge] gave a great deal of money to the singers, and then we wandered off to Raspoutine’s Russian nightclub where they all knew him. He loved to have his briefcase full of loose money, so he handed out great big notes to them so that they could stab them with knives in their mouths while they did Russian dances. He asked them to play [Jean] Sibelius’s “Valse Triste” on the pavement while we got into a taxi. We went off to Pigalle and saw all these people [opening] the market. It was like Covent Garden in the middle of Paris, and they were carrying côte de boeuf and vegetables. They all said hello to Serge, and Serge handed over glasses of champagne to them. I said he could drop me off at my hotel, but to my horror, he brought me to the Hilton, where they said at the desk, “Same room as usual Mr. Gainsbourg?” [Laughs] I thought, “Oh, no!” In the lift I made faces in the glass to give myself courage. When we got to his room I slipped into the bathroom, and when I came out he was asleep. I went off to the drugstore and bought [a copy of] “Yummy Yummy Yummy”…(I’ve Got Love in My Tummy). It was a rather silly song that I danced to in Régine’s. I stuck the single record between his toes and went back to the Hotel Esmeralda so happy—so, so happy that something had started, and that I’d managed to not keel over at first glance.

“He gave me the most heartbreaking texts to sing, very, very high. All I could do was to sing them as high as possible and make him proud of me.”

After “Slogan” was over, I was to go back to England because I didn’t want to be sitting around like I did for John with nothing to say for myself. There was nothing else in France. I was terribly English, and I didn’t think that anything would turn up, which was not what happened. [Director] Jacques Deray was looking for a sort of nouvelle girl to be in “La Piscine” with Romy Schneider and Alain Delon. He flew up the staircase when I was having dinner with Pierre, and thought I looked OK. Jacques offered to fly me down to Saint-Tropez to see what Romy and Alain thought. They OK’d me too—I was sort of the right height, or I don’t know what—and I was able to be in the movie. In Saint-Tropez, Serge, Kate, my parents, and I were all shacked up in the Hôtel Byblos for this eight-week shoot. It was so wonderful because I didn’t believe in myself at the time—not after a broken marriage and being very young.

Serge was able to wake me up to nearly everything because he’d already done his education. He was able to teach me about painting, because he had attended [École Nationale Supérieure des] Beaux-Arts. He was able to tell me about music, because I really didn’t know. He was the one who used my very high voice on “Je t’aime… moi non plus” a year after [Brigitte] Bardot, because it was an octave higher than hers. I had a sort of choir boy sound, which was what Serge desired. I’ve just been singing his songs all my life, really. He wrote the most beautiful songs when I left him. I was going to be his B-side, or rather, his feminine side. I realized that straight away when he gave me the text of “Baby Alone in Babylon,” or “Les dessous chics” or “Fuir le Bonheur [de peur qu’il ne se sauve].” I realized I was singing him. He gave me the most heartbreaking texts to sing, very, very high. All I could do was to sing them as high as possible and make him proud of me.

Serge developed a new French language. More than any of the others, he put so much into words. He cut up his phrases a bit like Cole Porter. “Champagne flying too high in the sky”—things like that. I don’t think it was done before. “[Histoire de] Melody Nelson,” was an entire story about falling in love with [Melody] as he crashed into her bike, right to the very end. French or American, I don’t think anyone’s ever done that. He was also into fashion. I was reminded the other day—seeing all these boys having a sort of four-day beard with no socks on in their white shoes—of how I once grabbed him a funny pair of shoes [Repettos]. At the time, I was going to buy myself ballet shoes and I rang Serge to find out if I’d gotten his feet measurement right. I got him these pumps that were in a basket on sale—they were like wearing a pair of gloves. He never wore anything else after. He used to totter out of his house and straight into a taxi in them because he didn’t like walking much. The jeans…and the shirt… and the women’s pinstriped jacket that he bought in a Chelsea antique market. I covered him with jewels, because he didn’t have hair on his chest, which I thought was so sophisticated. I bought him Russian jewelry—I guess it was sort of second or third hand next to Hermès—with sapphires.

“I was left with Serge alone at Régine’s nightclub, and I asked if he wanted to dance. He said no, but I pulled him onto the dance floor anyway for a slow song, and he stepped on my feet.”

He was so childlike. Once, he went off with my brother on New Year’s Eve. They went up to Pigalle, and Serge thought that this group of men there were sort of “cuddling” him into a taxi. Of course, they were ripping off all his jewelry! [Laughing.] When we got him back home, he was crying in the sitting room. I said, “You must promise to be more prudish next time and not to get into a taxi with people you don’t know!” He had this wonderful mixture of being a clown—I’ve never known anyone who had such wonderful stories—and at the same time, terribly romantic and sad: crying and, very, very close to the skin. Sensitive.

There were so many memories. We used to get very plastered in a place called Chez Castel, which was a nightclub that had this grand floor with people dining upstairs. One night, we went downstairs, and I think Serge had my basket. In those days, I carried a rather famous bag—a two pound basket from a Portuguese market. Serge turned it upside down and everything fell out. I was so ashamed and horrified that everyone could see everything! In a rather drunk mood, I put it all back in, itching for revenge. We went back upstairs and, in less than no time, I got my hands on a lemon custard pie that I chucked at Serge. It went straight onto his face. He turned his back, and he walked towards the door, which had been opened—out he went. First to the right, and then down the street, bits of pie falling off. I thought I had done something so shameful that I really had to do something pretty extraordinary: I raced past him and went straight down the Rue des Saints-Pères to the river and then I chucked myself into the Seine! I had to be fished out by firemen, it had quite a strong current! The Saint Laurent blouse I was wearing was dry cleaning only. [Laughing.] Serge was in a forgiving mood like anything—I mean really. All was forgiven.

When Serge died, then four days later my father died, I didn’t want to read clever obituaries, but there was an editorialist in England that was absolutely wonderful. My mother cut [the article] out. Bernard Levin was the name of the man who wrote, and it said, “We’ve got a great writer,” and gave the name. “But is he also a clown?” “We have a clown,” and they mentioned the name, “But is he also a singer?” “We have singers, but are they all the things that Serge was?” Then he said, “No, decidedly, no. We do not have a Serge Gainsbourg.” Anyone who met him was smitten. Such charm, such charm. 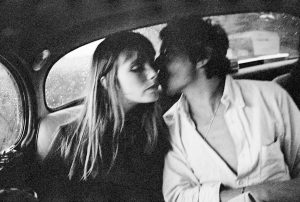