Thoughts on Paper: Donald Judd on longtime friend and collaborator Dan Flavin in an exclusive text

Donald Judd wrote for a variety of reasons, first for hire, writing reviews for “Arts Magazine” from 1959 to 1965, and then later for personal necessity, writing in a note from December 7, 1986, “Primarily I’m writing for the same reasons as I make art; from uneasiness at not doing it, because I like to write, and because I want something to read, as Barnett Newman said he painted so as to have something to look at.” Collected in the forthcoming book “Donald Judd Writings” this fall are both published and unpublished pieces, including hundreds of Judd’s notes, written for personal necessity but made public “for the record,” as Judd wrote. Made possible through the transcription of handwritten and typed writings from the Judd Foundation Archives, these essays, notes, and letters are documents of the artist’s reflections on art, architecture, politics, the environment, knowledge, on what is known, not known, and yet to be known.

Writing not just for himself, Judd’s essays also reflect his commitment to the work of other artists and thinkers, as can be seen in this 1969 essay on Dan Flavin’s work. Judd believed that everyone deserved possession of their own history, writing being a way to preserve, protect and correct history, because, as Judd knew, “a true account is all you have of the past.” Judd and Flavin developed a friendship after meeting at an artist’s cooperative gallery in Brooklyn in 1962. Judd wrote “Aspects of Flavin’s Work” for the catalogue of Flavin’s 1969 retrospective at the National Gallery in Ottawa. When the National Gallery hosted a retrospective of Judd’s work in 1975, Flavin gave the opening speech. As their mutual friend, artist John Wesley, has said of their friendship that, that the two “became ‘Judd and Flavin’ for a while. The two names were together.” Judd permanently installed pieces by Flavin at his home in New York, 101 Spring Street, and at La Mansana de Chinati/The Block, his home in Marfa, Texas.

Judd’s first drafts were always handwritten and then later typed by others, as he did not type. In this previously unpublished typed manuscript Judd’s corrections in pen are apparent. Whereas Judd’s early reviews underwent little revision, his later, longer essays often underwent many drafts, both handwritten and typed. 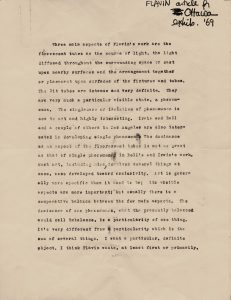 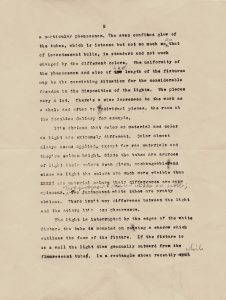 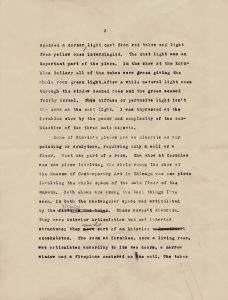 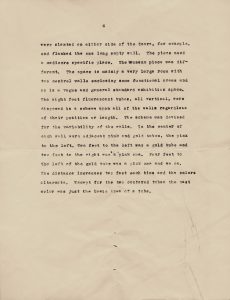