I grew up in a household of tinkerers, ham radio operators, and scientist-inventors. Normal was the hum of otherworldly static and the smell of overflowing molten plastic. Fascinated by anything new, my family raced over to the Guggenheim Museum in 1959 to see the inaugural exhibition. We proceeded up the ramp and scratched our heads, baffled more by Jackson Pollock and abstract expressionism than by Frank Lloyd Wright’s anomalous spiral building that crash-landed on Fifth Avenue. This childhood conundrum led to a lifetime in search of uncharted terrain: What art could be and how ideas crystalize became a lifelong analysis.

When we met, I felt an immediate kinship with Dara Birnbaum. Rock music and pop art opened our generation up to extended time and expansive vistas we tried to claim. Meanwhile, the U.S. space program landed a man on the moon. Journalists eulogized DuPont and other manufacturers’ newfangled designs for better living. Technology insinuated a glowing future for all. Affordable analog electronics infiltrated the consumer market as we became sickened by the Vietnam War. Our generation demonstrated, recorded and exchanged cheap audiocassettes with favorite playlists.

My curatorial career began at the Museum of Modern Art in the early 1970s, when international phone calls were expensive. New York City was bankrupt, the art world small, no one had money, yet energy and ideas soared. I gravitated towards video. The yet-to-be-defined, inexpensive hot potato drew me in. Artists approached the new consumer video tools from a range of disciplines. Many women gravitated to the newly wide-open field, attracted by portable video’s clean slate and lack of old-boys network. Advocates edited on the fly and operated out of nothingness.

In the beginning, artists considered television the enemy. They were barred from the high-end domain of commercial broadcasting, with its two hundred pound cameras locked onto enormous tripods in television studios, operated exclusively by card-carrying union engineers. On the other hand, broadcasters, with their entrenched technical regulations, considered artists’ grainy black-and-white videos made with portable cameras junk.

With the new video tools, many women artists investigated their identities, defying the romantic notions of beauty dissemi-nated by advertising and the consort roles offered by movies and soap operas, often in interdisciplinary projects, characterized by vitality and candor, that formed alternatives to and a critique of male-dominated modes of art production. Many like Birnbaum did their own editing, either facilitated by low-cost post-produc-tion studios available at the time or through studios in colleges, such as the Nova Scotia College of Art & Design. As the categories of Miss and Mrs. were torn apart, so were those of traditional art practice, reception, and circulation.

“When we met, I felt an immediate kinship with Dara Birnbaum. Rock music and pop art opened our generation up to extended time and expansive vistas we tried to claim.”

Toward the end of the 1970s early video’s revolutionary newness was petering out, and the equipment and technology were changing. Graininess gave way to more clarity, and editing became more precise. At MoMA, we were trying to document the medium’s early steps, and to do so we needed the direct partici- pation of the artists. In 1978, we launched “Video Viewpoints,” a forum for artists to talk about and show their work. A brilliant artist and speaker, on October 20, 1981 Birnbaum discussed her work in a program entitled “Pop-Pop-Video: Reinvesting in the American TV-Image.” With the arrival of MTV that year, she was one of the first that considered television one of the roots of video art. They put broadcast programs under the microscope for formal analysis. (In a few years she was joined by a younger generation of artists—Cheryl Donegan and Kristin Lucas to name a few. As one the first video artists to both appropriate and deconstruct television material—which was then not available or allowed to be used— Birnbaum deconstructed the popular show “Wonder Woman,” in “Technology/Transformation: Wonder Woman,” (1978–79), revealing it as a male invention, with a businesslike heroine becoming a scantily clad super-hero as a chorus sings, “Shake thy wonder maker.” Birnbaum designed her 1981 “Video Viewpoints” program notes with stills and pull quotes that echoed her work’s critique of the power of mass media images, and the result, with its slogans and bold style, had an affinity with the work of her then colleagues Barbara Kruger and Jenny Holzer.

The world has changed so inexorably that technology is close to being a user’s co-equal partner. The center is drifting away from New York, London, and Tokyo, away from galleries towards sales at art fairs and on the Internet. At the other end of scale, the young generation that grew up with media is going way out on a limb to take heterodox positions. As a continuously engaged artist—mostly exploring media and sound installation work—along with being a teacher, Birnbaum never lets any of today’s generation off the hook. They can be expected to appear out of left field with creative breakthroughs made through experimentation on a laptop at home or in novel shared workspaces that combine art, technology, social utilities, and science.

I am still engaged in my ongoing quest. I want to better understand how artists are using tools, especially at a time when ideas and content matter more than material formats. As always, Birnbaum is integral to my ongoing investigation.

I don’t know about the white people. I don’t know who
they are, where they come from. We people don’t come from
nowhere across the ocean.

My grandmother used to tell me stories. She told me how we got raised in Sedona….

My people are from Montezuma Well or the bottomless lake. After some time there was a flood. People do something wrong, and the rain comes. There is only two of them that come out from the flood. A girl and the woodpecker.

When the flood starts, people put that girl in a hollow cottonwood log. They put food into that log for her. Put a small hole in it. The woodpecker made that hole in the log. The people who put her in there, they said, “Don’t use the food right away. The flood will raise you. You will hit the sky… If you lay still, you will get out in the end.”

My grandmother thinks she laid in there 40 days and 40 nights. After some time, the water went down. The girl sent the bird out. The bird came back with a little weed. So the water was gone.

There at Sedona, there is a high place. When the water went dry, the log hit the high place…. The girl came out from the log…. She is the first woman on earth…. Kamalapukwi lived in a cave in Sedona. She was all alone. One morning she ran all the way over to Mingus Mountain and she lay down there before the sun came up. The sun comes up and hits her insides. After that she went to the cave where the water drips all the time. She lay down there and the water came down and hit her. This made her a baby. A little girl.

When this girl came of age, Kamalapuk said to her, “Daughter, they did that and you come up. You go over there and do like I did so we have other people.” The girl said, “all right.” She went up to Mingus Mountain and lay down there. But the sun did not hit her. Then her mother said, “Run down over there where the water drips, at the cave in Sedona.” The water came, but he saw it was his own daughter so he stopped the water halfway…. The next morning, before the sun comes up, the girl lay there and the old woman on top of her. When the sun comes out, the old woman quickly move to the side and he hits the girl….

She got pregnant and when she got the little baby it was a boy, Skarakaamche. When the boy was still a baby, a bald eagle killed his mother. All that was left was the old lady and the little boy.

Sakarakaamche then goes to his father but leaves behind the man and the woman he made. They stay in Sedona, down below Oak Creek Canyon…. The God told the man, “Anything here you can take. Take Anything! The one tree in the middle, don’t touch that.”

While the man is out looking for deer the woman sees the bush and the berries on it and thinks it looks good. A snake in the bush asks her where she is going. He convinces her to eat of the fruit so she can see everything. She saves some for the man. After eating it they realize they have no clothes on. When God comes back and sees what they have done he send them away and this is how all the people spread out.

As told by John Williams and Sigrid Khera and condensed by Pamela Williams. Further condensed by Dara Birnbaum (NYC, 2016). 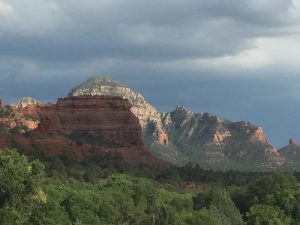 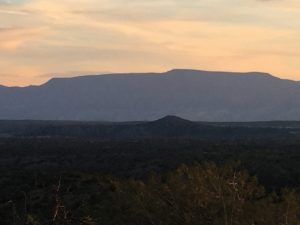 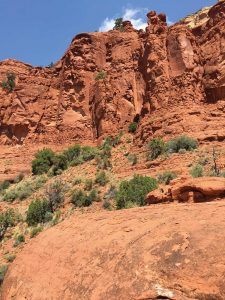 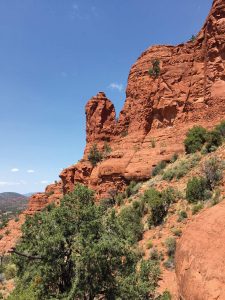 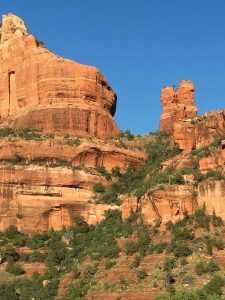 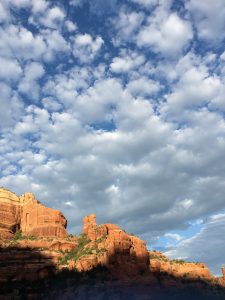 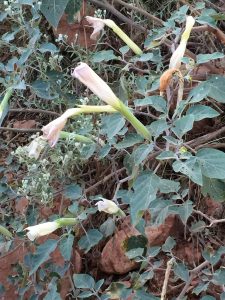 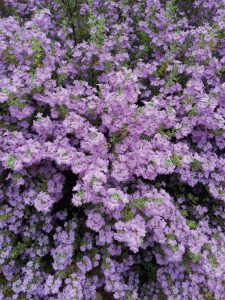 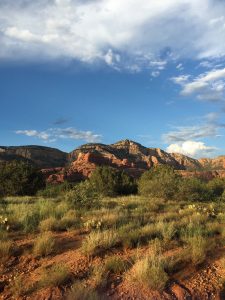 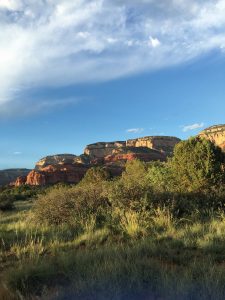 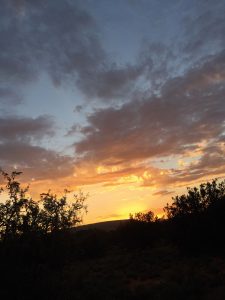 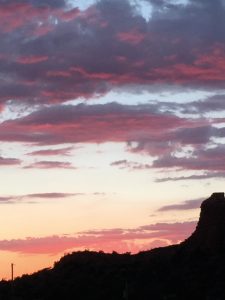