As a high school teacher of photography, Szabo has an insight into the teenage world that other photographers have failed to grasp in such a way. His book, Rolling Stones Fans, has just been released by Damiani in a hardcover version and is now out in stores. Here, Szabo recalls how he began photographing for his high school yearbook, how to photograph people, and how music permeates his way of thinking.

RACHAEL CASSELLS—I can trace my first compulsion to take photographs to the experience of being mesmerised by your photograph Priscilla. I was in high school, a girl crossed the schoolyard towards me wearing the Dinosaur Jr. t-shirt with that image on it. What were your formative influences as a photographer?

JOSEPH SZABO—Helen Levitt was one of the first real important photo influences that I think that I had. I was going to Pratt Institute in the late 60s, there was a little book called A Way of Seeing, I just happened to see it on the library shelf and started looking through it. She did these fabulous photos of street kids and people on the street of all ages during the 30s and 40s. I thought, “Wow look at that.” She captured such intimate moments, just moments that are really really private, and I thought, “Well I’d like to be able to do that someday.” That was a big, big influence.

RACHAEL—But you were taking photographs before that?

JOSEPH—Just the typical things for the high school or college yearbook or the college football game. I had no idea that photography was anything other than just a way to make an image of something that was going on that you would probably put in a newspaper or a yearbook. Photography really wasn’t a big thing back in the 60s as it is today.  There were only a handful of galleries and the Museum of Modern Art often had photography shows. Still, I had this drive to do something with photography and one day I spotted a little ad. I don’t know if it was the Village Voice or on some bulletin board; it mentioned that one of the master photographers of New York was looking for a hand full of students, so he could have a class with them. That was Ken Heyman. I signed up right away. The whole purpose of the course was photographing people—how do you do it? That’s something I wanted to know because I wasn’t good at that at all, I was just too shy.

It’s possible to photograph people. It’s all in your approach; If they sort of like you and trust you, it’s going to work out.

RACHAEL—It’s hard to imagine now you not being good at that!

JOSEPH—Well, I guess with practice you get better right? So I took the course and he gave us a tough assignment: He said, “I want you to go to Central Park and photograph people. The assignment is love.” So I went to Central Park with my camera. There were two kids sitting on the bench smooching and I thought, “Well, that’s love, maybe I can just get a picture of that.” I felt that I should be kind of close, so I walked back and forth in front of them very slowly thinking: “Maybe they won’t notice me at all, and I can get a quick sneak shot,” but I just couldn’t do that. It was like, you know the first time that you have to give a girl a kiss it’s like “Well when do I do it? I’ll do it in five minutes! That’s it. Five minutes, then I’ll do it!” I was just really nervous about the whole thing. I thought, “This is ridiculous, I’m walking back and forth and they’re over there having a good time. I think I’ll just sit down.” I sat down on the pavement not exactly in front of them but off to the side. Of course they noticed me there and said, “What’s up with you?” I said, “Well, I have this assignment to photograph love, and I thought you’d be a really good subject. Do you mind if I take a few pictures? If you could pretend I’m not here, that would be the best way.” And they said, “Sure, go ahead.” That’s the one shot that is in Almost Grown. It’s shot from a low angle—it’s a very intense emotional moment. That taught me that yes it’s possible to photograph people; it’s all in your approach, and if they sort of like you and trust you, it’s going to work out.

RACHAEL—Cornell Capa wrote the forward for Almost Grown, I remember a long time ago you told me about The Concerned Photographer exhibitions he organized. Were you part of those exhibitions? Is that how you met him?

JOSEPH—I saw that there was something starting called The Concerned Photographer that would involve lectures at NYU by photographers that Cornell Capa would invite to speak. I thought, “That’s going to be really valuable, I’m signing up for that.” So every Thursday after school, I would drive into the city. They invited all these big photographers. Any big photographer from that time, from anywhere in the world, Cornell knew them all. You really received a whole thing with their slides, their approach, their difficulties and everything about photography from their point of view. About that same time that’s when Cornell got his place on 94th and 5th avenue which was eventually called the International Center for Photography. He created it because he felt that there were so many wonderful photographers that were not being noticed, especially his brother Robert Capa. Actually when he invited this one photographer to NYU to lecture, at the end of the lecture I made some comment which was heartfelt, but it wasn’t too smart and I heard everyone sort of groan. I felt so bad about that, so the next week when I came to the lecture I was getting out of the elevator as Cornell got on. I said, “I’m really sorry about what I said last week,” he said, “Ah don’t worry about it. That’s why we are here, to express our feelings.” So thats how I got to meet him—in the elevator.

RACHAEL—Much of your work published in Almost Grown and Teenage was taken at Malverne High School [on Long Island]. Did you move out there because you got the job as a teacher or were you already living there?

JOSEPH—Right after I graduated from Pratt, I knew I had to have some kind of a job because I was married. My first jobs were in junior high schools, but I wasn’t too thrilled about being in junior high school. Jobs were starting to get scarcer at that point, in 1972, when I got a call from Malverne. It was a very different experience for me there because of the population of the kids. There were so many that were only taking an art course because they needed to graduate. They really weren’t all that interested. I thought, “Well, it looks like by November I’m either going to quit this job or something has got to happen.” And the something else happened: I started photographing during the art class and that made every bit of difference because all of a sudden there was a connection now between the student and the teacher. The students became kind of honored in a way that a teacher would take their photograph. That’s why I take photographs: it’s really saying “I like you and therefore I want to take photographs.” That started and things got much more interesting and a lot more fun. I made it through the first year and the rest is history.

RACHAEL—Your photographs of the Rolling Stones fans really take me back to that excitement of being really young and getting to see favorite bands play for the first time. I love all those really intimate tender moments you captured there amongst a huge audience of 90,000 people. You told me that a Rolling Stones show was your first concert. Was it the one you photographed or one earlier?

Two seniors asked me to go to a rock concert. My wife Nancy said, “Yes, you should go, there might be some good photographs there.”

JOSEPH—I had never been to a rock concert before. I always liked the music. I always liked listening to rock and roll and the music of the times, but I was just always busy with the family and busy taking photographs. I was shooting all the time, developing negatives and making prints all the time, so I never really did any of that. When Bill and Chris—two seniors—came to me with the idea “How would you like to go to a rock concert?” I mentioned it to my wife Nancy. She said, “Yes, you should go, there might be some good photographs there.” Their response was “Great! Because the show is in Philadelphia and we don’t have a ride!” It turned out to be the greatest thing.

RACHAEL—In the documentary The Joseph Szabo Project that George Pozderec and David Khachatorian made about your work, I loved the part where you talk about the music your students were listening to permeating your photographs. Can you talk a little about that?

JOSEPH—Music was something that was really important to understand the times and the teenagers who were listening to all that stuff. When I was taking art classes in high school in the early 60s, the nun would always have the radio on. So when I started the photography program in the early 70s, I bought in the radio to the darkroom and would ask the students, “Well what do you want to listen to?” They would usually pick one or two stations that had the rock sounds of the day. It was sort of a subliminal thing: it helped me understand what they were listening to, what they were being influenced by, and since I was listening to the same stuff, I had an intuitive understanding of them, their minds, their emotions, and so forth. I think that really helped me to connect and take photographs of them. The stuff that you listen to really forms your way of thinking. 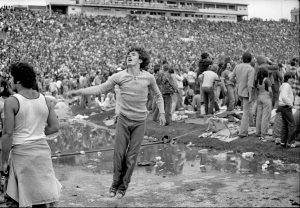 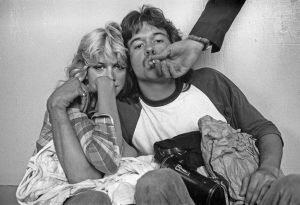 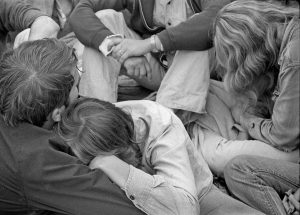 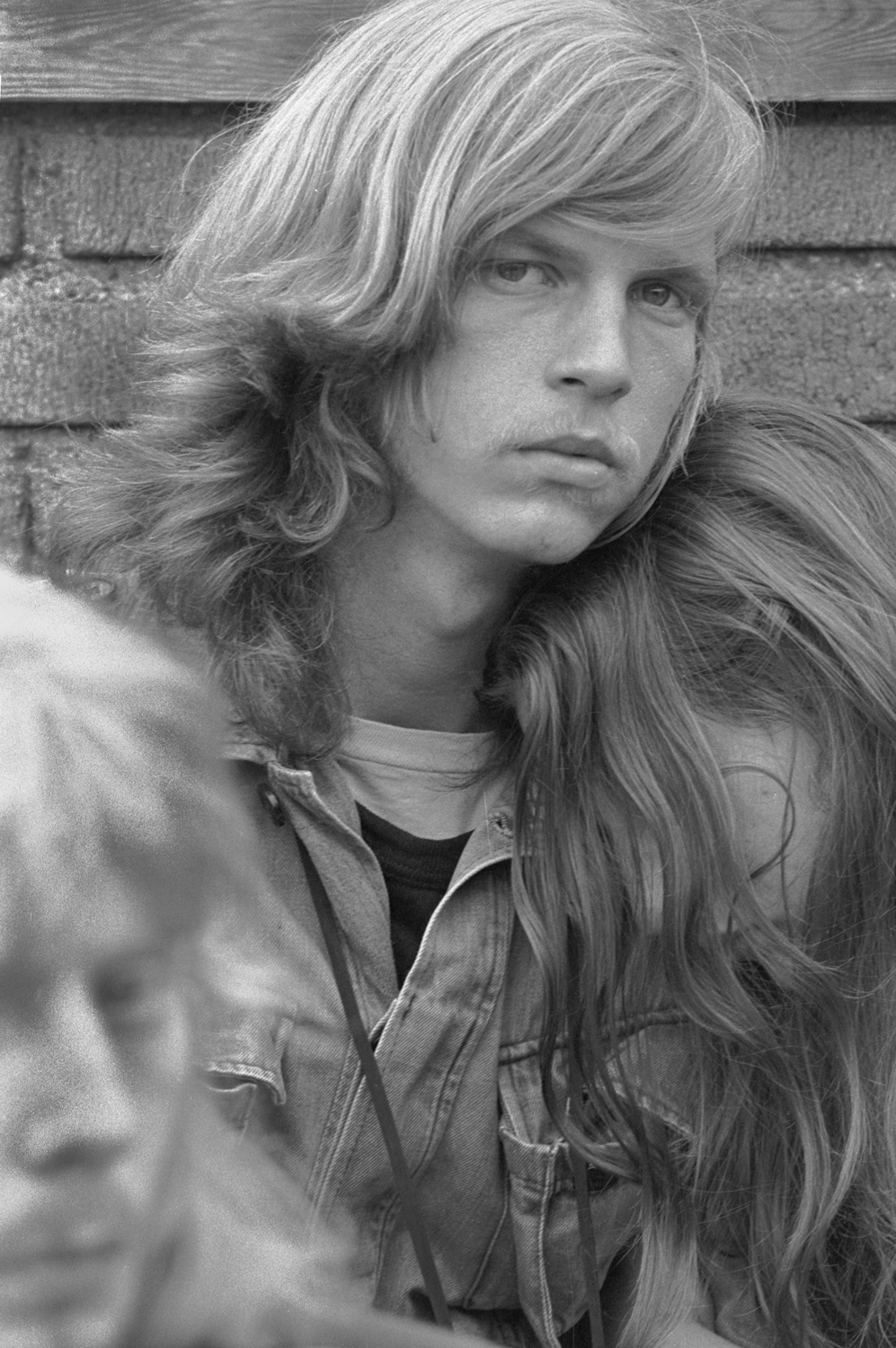 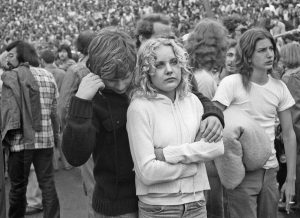 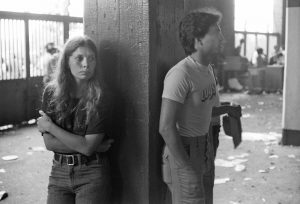 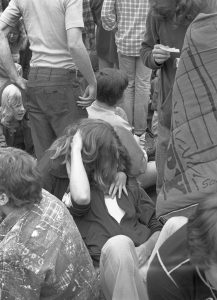 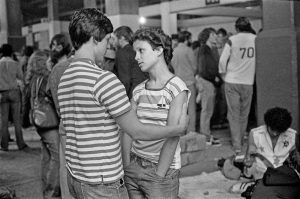