The pair discuss creative connection, protectiveness, and crossing over from acting to modeling.

Franco-English actor Stacy Martin, known for her break through role in Lars von Trier’s drama film Nymphomaniac, has modeled for the fashion brand Miu Miu’s advertising campaign. We asked Verde Visconti, the Director of Corporate Press Office and Strategic Projects for Prada and Miu Miu, part of the Milanese aristocratic Visconti family related to the famous Italian director Luchino Visconti, to converse about being an actor, their friendship and modeling for a fashion brand under the lens of Steven Meisel.

Verde Visconti—We’ve been trying to meet up for four weeks now exchanging lovely and heartfelt emails and it’s finally happened! We first met in March [for the F/W 14 Miu Miu campaign] and it was such a revelation. I’ve been obsessed with you ever since.

Verde—I feel like she’s part of the family, but even more because sometimes family is a bitch. You are part of my elected family which I will carry with me for the rest of my life.

Stacy—It was so amazing. I was so nervous; I didn’t know how it was going to go. We were flying to New York and it was quite a big deal. As soon as I knew that Verde was going to be there, it was such a relief! You meet someone and you don’t have to know much about them, but you instantly connect. It’s so natural.

Verde—That’s so sweet. When you are going to meet someone, you don’t know if they’re going to be a tough cookie. I saw her amazing performance in Lars Von Trier’s movie [Nymphomaniac] and I was so impressed. Then I met with her and we clicked. We both ride bikes, talk about dogs and try to be cultivated sometimes but it often goes in the other direction [Laughs].

Stacy—At least we try and that’s the important thing [Laughs]!

Verde—Then we went to the Met Ball together which was so much fun. In a few months we’ve had a lot of experiences together and then on the campaign, we managed to make work fun, too.

Nick Vogelson—Stacy, I want to ask you, being an actor, how it feels to be a model and muse of Miuccia while shooting the campaign?

Stacy—It’s quite strange because when it was all happening, I was concentrated on going to New York, being on set with Steven. It was gratifying that a brand supporting so much existing and emerging talent would bring me into that world. Verde and everyone in that scene are so fascinating and Steven is the same way. It was such a surprise to be inspired by people who I didn’t expect would inspire me. I was approaching it as a job but then it became a much bigger thing.

Verde—When I was a young girl, I never thought I would be in a PR job so far from my desires. You know when you are a kid you want to do things that you think might change the world. I’ve been working for Prada for quite some time and one of the best parts of my job is meeting a lot of people. Some of them don’t change a thing but then I find someone who changes everything and becomes part of my life. It’s exciting to meet creative, but also real, people. People say the fashion world is all fake but every world is made of people and when you find a connection, it makes everything so much more important.

Stacy—You want to nurture it. Do you sometimes feel quite protective as well?

Verde—Totally! I’m so jealous about everything and everyone.

Verde—I become very protective of the people I care for, but that’s natural. I’m fascinated because even if a job can be repetitive, the person who is in front of you is always a puzzle. There is a way to get through and have fun.

Stacy—Otherwise, what’s the point of it if you don’t find the people that inspire you, you connect with, that you love and want to work with?

Nick—What inspired you to become an actor?

Stacy—I’ve always been drawn to acting. I liked the classics. It was a hobby going to acting classes rather than a job and not what I imagined I would be doing to earn a living. Then I came to London and the more I was doing it, the more it made sense to me, doing it unconsciously on a day-to-day basis. I did my training and once I graduated I didn’t want a job in an office. Then it sort of just started from there and happened without even me realising that it was happening, meeting Lars and acting in Nymphomaniac. So my hobby became my job and it was a transition I thought I would never do. It feels strange in a way because I didn’t make a decision to be an actor. As much as I love what I do and I don’t really consider it as a job. It feels great to be paid to do your hobby!

Verde—It was really that amazing that you pulled off your hobby in that way.

Stacy—Some people see acting in a lucrative way. To me it was the chance to do what I love and not to have the pressure to earn enough money. I was able to just let go and be myself.

Verde—Pretty amazing any way you think about it.

Stacy—Is there anything else you would like to talk about?

Stacy—Yes he’s amazing, where does he come from?

Stacy—He’s a mystery… You two have such a lovely relationship.

Verde—I know. He’s such a mystery but he’s divine though. I think he’s amazing and I love him so much. Did I tell you about the first time we met? Everyone terrified me by saying he’s very reclusive and shy so not to upset him. So I said the only way for me to speak to one of my heroes is to go up and hug him in my Italian way! He was very sweet to me. In fact he’s such a genius. We had a laugh. Pat McGrath was doing the makeup and Guido the hair and it’s like a family because they have been working together so many years. Either you jump in or you think those guys are completely crazy.

Stacy—But it works really well as everyone has their little position in the family. There’s nothing unsaid and everything runs so smoothly.

Nick—How long was the shoot?

Stacy—It was too short anyway.

Verde—We had the magician in [Laughs]. We were concerned about the puppies running around. Instead of being entertaining they were causing drama all day. You were the only one who got your tarot cards read.

Stacy—Oh no it wasn’t just me, Steven had them read too, and we took pictures as well. I’ve never had that done before. I thought it would be an old man with a beard with crystals and all that sort thing, but instead it was a young guy.

Nick—What did he tell you?

Stacy—I’m not going to tell you that…[Laughs] It wasn’t negative at all, in fact everything was quite positive and just really insightful. It gave me the shivers.

Verde—I know it’s terrifying. I go and see shamans as well. I have to send you to this guy I see, but energy wise it exhausts you. He tells you about your previous lives and everything, it’s crazy bizarre. 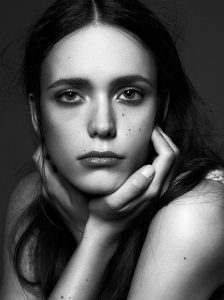 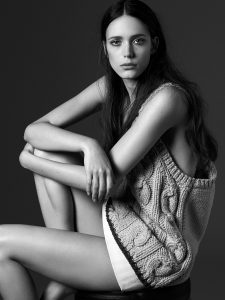 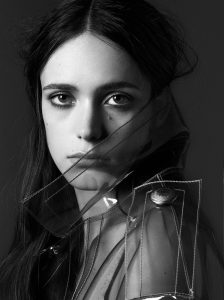