“While the world fights against the coronavirus, Palestinians are fighting both the virus and military occupation. We are fighting a war on two fronts,” says Yasmeen Mjalli, the 23-year-old founder of Palestine-based brand and social enterprise, Babyfist, who recently manufactured and distributed 65,000 protective fabric masks to communities in Gaza.

Anticipating a catastrophe, the World Economic Forum ranked Gaza as the most vulnerable population in the world, noting that it is completely ill-equipped to manage a coronavirus outbreak. Gaza is the most densely populated city in the world and yet 90% of its population lives in poverty with more than 90% of its water deemed undrinkable. While some of the largest cities in the world have more access to lifesaving resources, including New York City which has the highest number of cases globally, many places are struggling with shortages of Personal Protective Equipment (PPE) and broken healthcare infrastructures. But the reality is that the circumstances are exponentially more grim in Gaza. Israel has given only 200 test kits (that’s 1 test kit per 10,000 people) to the Gaza strip.

The daily human rights violations experienced by Palestinians have always been underreported, allowing these events to reside in the dreary shadows of mainstream media. As lack of access, violations, and housing demolitions have increased, these shadows have swelled to match. Babyfist has been a light in the darkness, using fashion as a medium to illuminate issues at the intersection of military occupation, structural oppression, and feminism while leveraging their platform to enact real change.

Document spoke with Yasmeen Mjalli about the early beginnings of her business, which was co-founded with Amira Khader, the mask initiative they recently set up with the Palestinian Medical Relief Society and what life looks like in Palestine during a global pandemic. 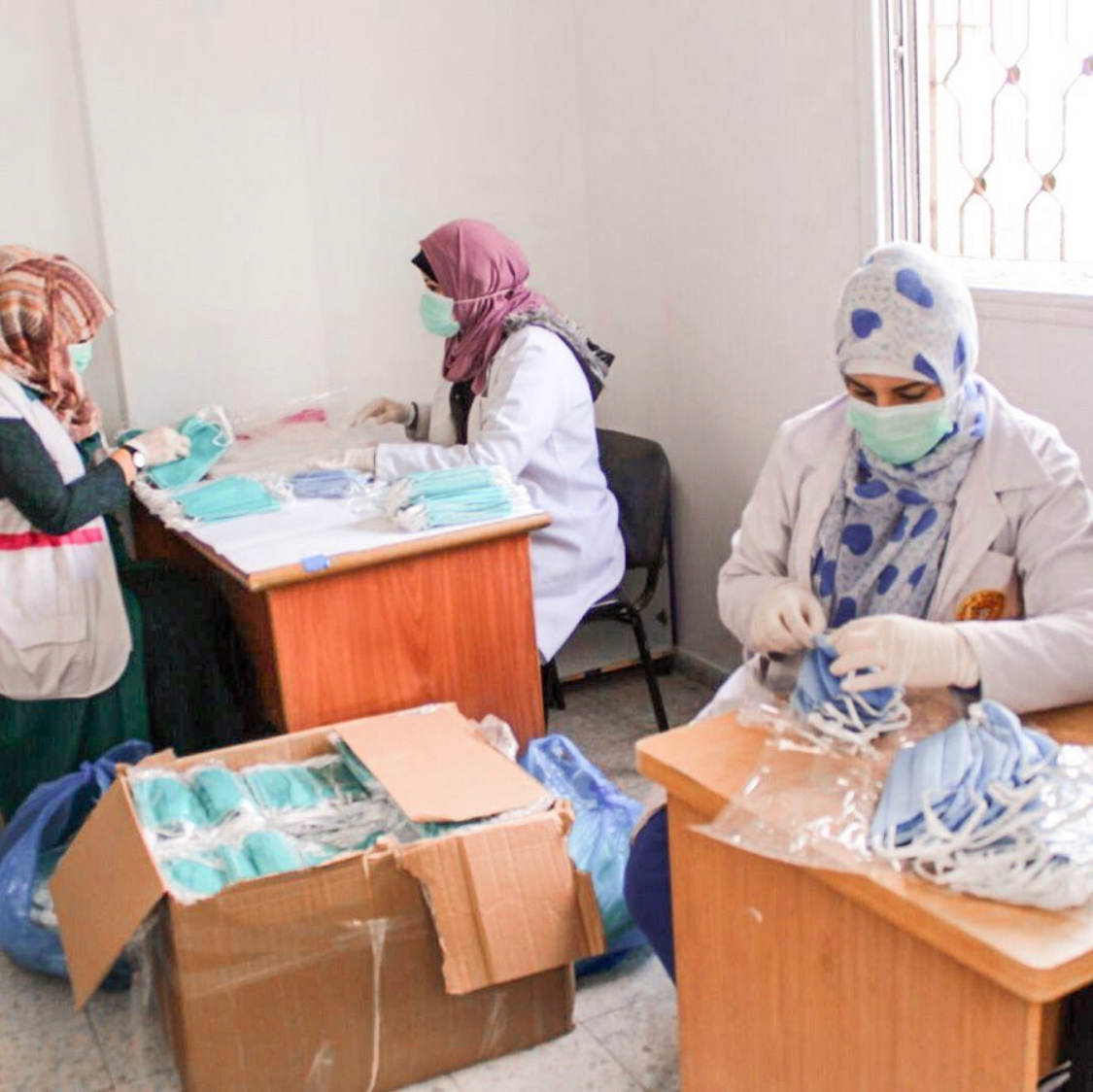 Yasmin Ahram: How did you start Babyfist?

Yasmeen Mjalli: It really started when I was sobering up to sexual harassment, gender issues, and gender inequality. I was really having my feminist awakening that was catalyzed by the fact that I was experiencing sexual harassment and catcalling for the first time when I moved to a city in Palestine. My whole life I’d never been really exposed to that, I was born and raised in the US to Palestinian Muslim parents and we lived in a rural part in North Carolina. I was trying to tell people what was happening and it was being brushed under the rug; it was an incredibly lonely feeling. I needed a space in which I could heal and I knew that to heal, I needed to talk about it with other people who had been through something similar.

Yasmin: What was the first project you did through Babyfist?

Yasmeen: I started buying second-hand denim jackets and then hand painted the back with the words “Not Your Habibti” [habibti means my love/babe in Arabic,] and then donating the money. Very quickly I bought up all denim jackets I could find in the West Bank and someone suggested that I start manufacturing them myself. I was then connected with a factory in Gaza in summer of 2017 and we’ve been working together ever since.

Yasmin: Tell me about how you started your menstrual education project.

Yasmeen: In the beginning, [Babyfist] was purely about sexual harassment. I hosted workshops where people could feel safe opening up about their experiences. We also wanted to build communities for people who didn’t really have them otherwise. Another thing we were doing was the Typewriter Project. We set up typewriters at various points across the West Bank and collected stories. Eventually, when we opened our shop in Ramallah, we decided to donate to a new cause every month. By the third month, we did a menstruation workshop and ended up falling in love with it because it was the first time we could see tangible change within the span of an hour. We now work with Dr. Kayana who is from Nablus and based in Ramallah; she runs all the workshops. Students we work with, typically sixth graders, go from knowing nearly nothing or having misinformation about their bodies to knowing a hell of a lot more. We’ve been doing that since the Fall of 2018.

Yasmin: Education and awareness are at the heart of what you do and personally I’ve found your Instagram account to be incredibly informative and transparent. What is the role your platform has played in allowing you to access a larger audience to teach people about the deeper issues impacting your work?

Yasmeen: It isn’t just about the clothes, or the menstruation campaign, or even the coronavirus. It’s all connected. Instagram allows me to draw those connections and build community. We’ve combined photos, videos, and writing to draw attention to the intersectionality of these issues because the personal is always political. When you buy a jacket from us, you’re not just buying a jacket. You are actively participating in this larger political framework.

Yasmin: When did you decide to start making masks?

Yasmeen: On March 25th we launched a crowdfunding campaign to fund an initiative to manufacture masks in the factory we normally manufacture our apparel in. We had already halted manufacturing weeks ago and had closed our shop not long after. It was really difficult to see what the world was going through, but it was also really inspiring to see what so many brands started doing by converting their factories so they could produce masks. With a connection to this factory in Gaza, it was only natural to start asking ourselves if this task was possible for us too.

I started talking with the owner of our factory thinking that it was impossible. I thought that they would not have the resources or even the time. When I called him up and asked, ‘Is this possible?’ He was like, ‘Yeah, actually, we can do it tonight.’ When he said that I thought okay, give me just 24 hours and let me raise some money. I didn’t have to question ‘should we do it?’ It just seemed like a natural thing to do. We wound up making 65,000 masks.

Yasmin: How does the shift into manufacturing masks affect the workers at the factory?

Yasmeen: There’s no fabric coming into [Gaza] and nothing non-essential is allowed in, so if we weren’t manufacturing masks, the factory workers would not be earning wages. This is already a really difficult situation since 40% of people, if not more now thanks to the virus, are unemployed. We found it rewarding to give these [people] work, which we hope will continue till they have a job when things clear up. They’re sitting at desks minimum two meters apart and wearing masks, and that was one way that we could ensure that they were staying safe as well.

Yasmin: How are you distributing the masks?

Yasmeen: We’re both Palestinians with Green IDs, which means that we’re not allowed to move outside of the West Bank and cannot enter Gaza or ’48 [the territory that was occupied by Israel in 1948.] This means that we’ve been organizing over WhatsApp and have to rely on organizations on the ground in Gaza. We’ve partnered with the Palestinian Medical Relief Society (PMRS.) They were founded 41 years ago by a group of medical professionals and doctors who knew that the health care system was radically underperforming to the effects of occupation. They decided to create an organization to supplement the system. They’re a grassroots and community-based organization, and I think that’s wildly powerful. It speaks to how change should really be coming from the ground up.

Yasmin: Who are you and the PMRS donating the masks to?

Yasmeen: The PMRS has identified four communities that are the most vulnerable and in most in need of the masks. This includes the Al-Shati refugee camp, the municipalities of South and North Gaza, sanitation workers on Erez checkpoint and sanitation workers in municipal hospitals. They need the most protection because they are in direct contact with people who are moving across borders and they make sure the system is protecting people during this difficult time.

Yasmin: One of the things that you said that really struck me was that ‘everything you purchase goes through checkpoints, representing a resistance to the effects of spatial control.’

“I’ve seen that people can do food delivery in the US but that’s something we completely stopped here in Palestine; people are dying for pizza.”

Yasmeen: For nearly 14 years now, Gaza has been made into an open-air prison in which human movement is severely restricted, keeping people from leaving and entering. During quarantine, we had checkpoints between every district within cities, not just between towns and villages. In the face of the COVID-19 pandemic, these conditions push Gaza even further into the throes of a humanitarian disaster.

Yasmin: Can you tell me a little bit about what your day to day has consisted of since the lockdown?

Yasmeen: We’ve been under quarantine up until this week. There’s a curfew of 5pm, no one can go out even walking, technically. People do it anyway. All shops close at 4:30pm. If you’re in a grocery store between 4:30pm and 5pm, you will see police coming into the grocery store and almost harassing shoppers to get out. I think we’re one of the few places that don’t even allow food delivery. I’ve seen that people can do food delivery in the US but that’s something we completely stopped here in Palestine; people are dying for pizza. Also, we had checkpoints between every district, many couples are separated, myself included. Palestinians who are from ‘48 can come and go into the West Bank as they please. Even if I don’t have a permit during a specific time, my partner could technically come see me but now that’s completely closed.

Yasmin: How have you seen COVID-19 further the harassment and oppression Palestinians face?

Yasmeen: Under “normal” circumstances, Palestinians effectively live under apartheid. Continuously, entire communities are displaced, unarmed protestors are met with gunfire, movement is restricted, natural resources are exploited, land is stolen, etc. As a consequence of occupation, our health and sanitation infrastructure is not equipped to handle an outbreak. While the Israeli state occupies the Palestinian people, it keeps itself from taking responsibility and does not provide lacking and necessary resources due to occupation in the first place. Housing demolitions have continued and the expansion of settlements has not halted. While Palestinian citizens are under lockdown, Israel has taken advantage of a crisis to advance its expansionist policies.

Yasmin: What are some resources or accounts people can follow to stay informed on what’s happening and know how they can provide support?

Yasmeen: Follow grassroots, community-based organizations, and individuals. Hanan Ashrawi, Quds Network, IMEU. That’s how you’re going to get news that’s never, ever, ever going to be reported in mainstream media, and if it is, it will be reported incorrectly.