Narcissister, in conversation with Peaches

Musician Peaches and performance artist Narcissister couldn’t care less whether you think their work is vulgar, revelatory or both. Both feminists in their own right, the women shock audiences with their provocative, in-your-face theatrics. The two talk about vaginas, onstage antics, and the challenges of being a woman artist.

Peaches—I think the first time we saw each other was at the Bowery?

Narcissister—I saw you. [Laughs.] I don’t think you saw me. I was in the front row, jumping up and down like everybody else. I had been wheat-pasting posters around New York and I had brought one to throw onstage. You caught it and held it up to your pelvis. I was so excited about it, because the pelvis is the site of so much life and energy and so many political questions. And your album cover, Teaches of Peaches had that amazing pelvis image.

Peaches—Actually, that picture was from a live show. I used to wear really cheap pink spandex to perform: because I was so aggressive onstage I wanted a counterbalance with little, tight pink shorts. I didn’t really do a great job shaving down there, and I noticed that when I was playing, people would point to the center of my pants, delighted and horrified at the same time. A picture taken at one of the early shows became the album cover. Actually on my first website I had an image gallery where people could send me a picture of my crotch.

Narcissister—I am also drawn to that site of the body: it’s an essential framing of issues related to womanhood and eroticism. I used to create images that felt feminine and put them in the rough environment of the street. Looking back, those connections just seem a little bit too facile.

Peaches—You came from a visual art and dance background, is that right?

Narcissister—Yes, and commercial art. I was working as a stylist for photographers and as a window display designer. I had all of those different influences—of having been a professional dancer and being a visual artist, and doing commercial work, creating tableaux and working with mannequins.

Narcissister—As a commercial artist I would facilitate other people’s visions. I knew that I wanted to get paid to put my own vision out in the world, but I was also dissatisfied with my own artmaking. I was working on portraiture and I was finding it really hard to create any original imagery. Then, combining all these different things—my experience as a dancer and a commercial artist, and my art ideas—I created something more original. That was the Narcissister project.

Peaches—Was there a moment that it became yours?

Narcissister—It happened really fast. One of my clients was Agent Provocateur, the lingerie store in SoHo, and a lot of the women working there were in the burlesque scene. They invited me to their shows and once I saw it I realized that I wanted to do this too. I entered a burlesque contest that Murray Hill hosted and I did it as Narcissister. That was my first performance and I just started getting jobs right away.

Peaches—Sometimes it’s just a matter of finding a new way to express all the things you can put together. I had a rock background and I had a theatre background—I wanted to be a theatre director, I went to theatre school, but I wanted to make musicals. And then I went to theatre school and I realized that it just was too frustrating to get so many people together. I was thinking a lot about the energy of rock-and-roll and hip hop, then I added a riot-grrrl chorus and a chanting style. Once I brought them all together it clicked. A lot of people were interested in the result because electronic music wasn’t very popular yet. Also people didn’t understand why I didn’t have a band, why there was just this weird machine there. I knew I was doing something right because I was confusing people too.

Peaches—I just made the movie-musical Peaches Does Herself, and a theatre in Berlin asked me if I would like to do a production of it. They had no idea that I’d ever done any theatre before. I realized that I had the perfect opportunity to make the musical I’d wanted to make 20 years ago! It’s so interesting because I’m not very calculated in terms of having a career. I also got to teach, too. After I dropped out of a director program I worked in a daycare, and it was super boring so I made up this hybrid music-drama program where the kids could role-play. One of the directors saw what I was doing and hired me to teach teachers how to be creative with the kids. I did that for ten years before Peaches. And then at night I was doing music—it wasn’t Peaches, it was just exploring all kinds of music.

Narcissister—Have you thought about working with children again? It could be interesting to include kids in one of your theatrical productions.

Peaches—Definitely. I’m very interested in performance without professionals involved. You can see that in my movie, too. Kids taught me a lot about performance because if they don’t like what you’re doing they pull your hair, they tell you you’re boring. They’re the best punk audience ever.

Peaches—Amazon and iTunes and Netflix won’t carry it—I think because it contains transgender nudity. I obviously have to bring up when you were on America’s Got Talent—when they realized where that other head was coming from.

Narcissister—Well the head comes from between my legs but I never thought of it as coming from my vagina; that’s just where it is. But that would be cool. Sort of like a birth—she’s birthing herself. But no, there’s nothing inside my body in that performance—I was more interested in creating illusions of a person composed of unimaginable, unfathomable parts, meaning that one could read legs as arms or what have you.

Peaches—I think it’s interesting that what I do with my voice, you do similarly with your body.

Narcissister—I think my training as a dancer really showed me how expressive the body could be. I trained at the Ailey school and I also trained in the Graham technique. I aspire to express with my body, so when I started Narcissister I didn’t want show my face. I also use pop music for my project, to establish an era and to critique pop culture. Narcissister is a wanton, gluttonous consumer of things that are not her: she consumes personae, songs, imagery, and claims them as her own. Well-known pop songs become her words. I actually did a performance as Narcissister where I sang. I have a mask that has a microphone built into it. But it was unsuccessful because I realized that when Narcissister speaks it has to feel righteous. So I made a puppet costume that’s a woman from the back, which I wear on my head. The woman is bent over so the part of the puppet that’s right in front of my face is her vagina. I stick the microphone in the vagina and then I sing her song. You just see a microphone in a puppet vagina singing a rap.

Peaches—Lyrics have to be just right: big statements but with some humor in them.

Narcissister—You’re like a poet instigator through your songs. Your lyrics are a call to confession or else they feel revolutionary. They can’t be throwaway accompaniment to whatever music you’ve got.

Peaches—But you want it to be fun, too, and light.

Narcissister—I remember a long time ago I went to see a Violent Femmes concert. I’d always really loved their music but they were getting a bit older by that time. It ended up being comical in a way that I don’t think they intended, singing lyrics from their older songs like, “Come on, Dad, give me the car keys.” These old men were still earnest in their delivery! As artists, as we change and maybe become more mature, how can we continue to make work that’s true to our message, true to our energy, but is relevant to who we are now? Do you feel the same way about your song  “Fuck The Pain Away” at this point in your life, as when you wrote it?

Peaches—It’s a lot of pressure. You have to make your own point. 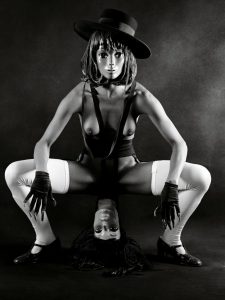 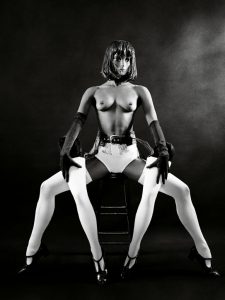 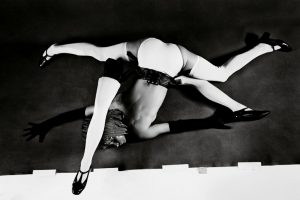