The artist’s latest exhibition crosses generations and borders, weaving together a tapestry of characters and cultural references

The work of Maïa Régis is not limited by time or by place. The artist’s latest exhibition KILOS opened just last week at London’s Carl Kostyál Gallery, but its influences cross generations and borders, weaving together a tapestry of faces, color codes, and cultural references, observed, lived, and borrowed.

Régis comes from a family of creatives, whose practices have informed her own. Her mother is a filmmaker and an anthropologist, lending a fascination for the human character, and the communities that inform them; KILOS displays several non-traditional portraits, including BALLARÒ, EL GRANDE TOTO, and YAMILKA, which each feature one prominent character, surrounded by words and highly-saturated objects that characterize the artist’s interpretation of their narrative—or at least a slice of it. Writes gallerist Magnus Edensvard of the latter work, “Yamilka, smiling coyly, was originally photographed sitting on a street bench in Havana, perhaps as a result of recalling memories and wisdoms collected along the way. Or perhaps from a memory sequence in her favorite film, the tastes of foods, or from past time indulgences like smoking a cigarette.”

This affinity for ephemera, and for the repurposing of memory, is likewise related to Régis’s family, whose work she came into renewed contact with over quarantine. She moved back into their shared Paris apartment, discovering a sheath of faded paper that belonged to her father, who is also an artist. They served as the jumping-off point for her latest exhibition, as she experimented with a new series of drawings that would eventually lead her to a studio in Palermo, Sicily, where her grandmother Lia Pasqualino Noto once practiced, and then to Pantelleria with her brother Jules, an architect.

KILOS, in its final form, thus unites a range of influences, both personal and hyperlocal to cities that Régis encountered with fresh eyes. The exhibition is comprised of a dozen works—11 paintings, and one work on paper—that function as playful, indefinable collaged stories. Any given work is likely to shed light on a place’s local produce, its characteristic consumer goods, its animals, its fashions, its pastimes. Says the artist herself: “I want to transform the canvases into living beings, into visceral surfaces. They have to be fed from chance. What I’m looking for in my work is for it to be the most full of life possible.”

Maïa Régis’s KILOS is on view at Carl Kostyál Gallery through January 7. 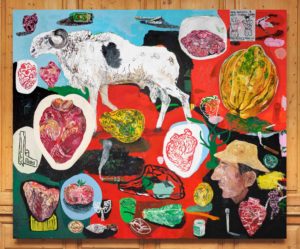 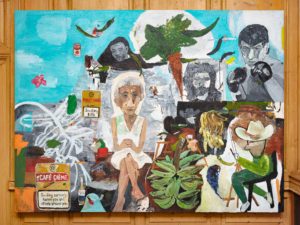