An icon of the Pictures Generation, the artist is back with a never-before-shown series of works showcasing pornographic images in surreal suburban interiors

Laurie Simmons always starts with an idea—usually something in the world, something that she wants to see. “Then [the artwork] becomes very grounded in a kind of reality: my reality. But the way something eventually looks—that’s all intuition, alchemy, magic. Scratch the word ‘magic,’ it’s one of my least favorite words,” she says with a laugh. “Wait, it’s actually okay to include, as long as you say that I said to scratch that afterward.”

A renowned American artist, photographer, and filmmaker, Simmons has a long history of making art that subverts expectations: from the trappings of gender and domesticity to the promise of advertising, and the superficiality of its fruits. We’re meeting to discuss Simmons’s latest exhibition Color Pictures/Deep Photos, which is currently on display at 56 Henry, a small gallery in Chinatown. For the show, Simmons revisited a series she began working on over a decade ago, featuring imagery of nude women from online amateur porn site situated in dollhouse-like domestic interiors. The pieces were never shown, and now, years later, have taken on new life and significance—drawing attention to what has changed, and what remains the same. “Our relationship to nakedness and nudity changes all the time—the world has a different relationship with pornography now than when I was downloading these images in 2007,” Simmons says. “There’s certainly a raised awareness of sexism, but when it comes to women and our position in society, I can’t figure out if it’s evolved.”

The process behind the exhibition was surprisingly natural, considering that Simmons was revisiting a series she started over a decade ago. “I’ve made work that’s been easy and I’ve made work that’s been terribly difficult, and this had a kind of ease about it,” she says, describing the reconfiguration of these images as an intimate process of layering: not only furniture, found objects, and props, but also the associations that come with them. Printed in a much smaller format than the original series, the photos are set in deep frames, into which Simmons gradually poured clear, sticky resin—burying new objects within them, in dialogue with those she had previously collaged in. In this iteration, two-dimensional and three-dimensional worlds intermingle, bridging the gap between the ephemera of suburban family life, and the online pornography so many use to escape it. 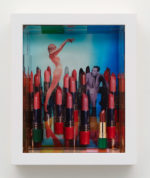 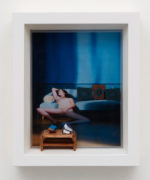 
Juxtaposed with the miniaturized trappings of domestic life—tiny toy sinks and vanities, a shrunken piano, minuscule wooden furniture half-suspended in resin—the images take on new significance, one that’s been further characterized by the popularization of at-home sex work. In the era of OnlyFans, a woman masturbating against the eerily lit couch where she might have coffee the next morning feels uncanny and familiar—speaking to the collapse of boundaries between public and private, performance and pleasure, in an era where our inner lives are increasingly broadcast outward for public consumption. “I think art has a very long life, depending on who’s looking at it and in what time,” Simmons says. “I’m a student of fashion and love observing how trends come and go. I notice the same thing, even in my work: Sometimes there will be a series that I just can’t stand looking at, and 20 years later, it’ll look okay again.”

One example was Simmons’s early dollhouse pictures, which she turned away from after encountering another artist working with similar subject matter—albeit to very different effect. “I was so shocked and humiliated that someone else could be working with the same imagery,” she tells me. “But I see it now as a very immature response. The lesson that I learned is that a lot of people can be dealing with the same issues or the same images. I was frightened that someone else was in my territory, or that I was in their territory. I didn’t understand that fertile territory is available to every artist, and we’re all going to approach it in our own way.”

These days, Simmons is finding inspiration in the 21st century’s changing notions of gender—a subject she has witnessed firsthand as the parent of a trans son, Cyrus. “While I usually have a really difficult time shooting real people, I find that he’s a muse. I’ve taken photographs of him that have shown me that I’m getting to someplace with portraiture that I’ve never been able to get to before,” she says. “There’s something about the combination of my love for him and who he is, and what he’s been through, that makes having him sit for me very emotional and poetic. In that case, I will use the word magic.”

On the day of our interview, Simmons is playing nurse to her husband, the painter Carroll Dunham; she’s equally attentive to her dog Penny, who at one point interrupts our conversation by having a nightmare. (“Penny, wake up! God, she always embarrasses me.”) Simmons’s children are creatives, too: The director, producer, and actress Lena Dunham, and the activist and writer Cyrus Grace Dunham, whose debut book, A Year Without a Name: A Memoir, was a Lambda Literary Award finalist. “They grew up with two artist parents, so that seems very normal to them,” Simmons says. “I think that whatever your parents do becomes the norm, whether they’re a baker, or doctor, or any other thing.”

The same was true of Simmons’s own upbringing, but in a sense that’s hard to quantify. Her father was a first-generation American with an ironclad work ethic, who made a living as a dentist in a small town. Growing up, he had an office right off their kitchen: “It felt like this really cool place to go to, and he seemed to love it there,” she says, describing an eclectic room full of boxes and charms and toys, a fish tank and countless magazines, plaster casts of turtles in molds, and colored pencils to decorate them with. He even had a darkroom in the basement, where he would develop x-rays while Simmons sat at his feet. “His office was this magical place he disappeared into all the time. It really reminds me of an artist’s studio; it can exist in reality or in your mind, but it is the place you go to, whether it’s your laptop or 10,000 square feet.”

Her father had an affinity for sculpture, but the pressure to make a living and support a family was too great for him to pursue it as a career. He was impressed by Simmons’s art, but often urged her to exercise caution for the same reasons: “He talked to me a lot about ending up living in a ‘cold water flat,’ and I was always like, ‘What’s a cold water flat? What are you talking about?’” she laughs, “He was terrified of the idea of an artist’s life.”

Simmons wasn’t. After getting her BFA at the Tyler School of Art, she moved to New York, where she cobbled together a living through a hodgepodge of short-lived gigs, from dogsitting to working in game stores. (She once heard art dealer Leo Castelli say, ‘Real artists don’t have real jobs,’ and internalized the message.) It was a New York way of life, but one informed by her upbringing in a Jewish suburb of Long Island, which she credits as a formative influence on her art. “Most of my visual language started there,” she says. It was a time defined by economic expansion after World War II, and a resulting influx of material prosperity—themes Simmons later examined in her work, assembling and shooting tableaux of domestic spaces in order to reveal the uncanny, synthetic superficiality of suburban life, and the hollow goals society sells to the middle class. 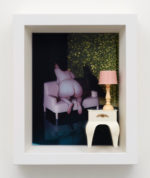 Simmons is part of the Pictures Generation, a wave of artists who came to prominence in the ’70s and ’80s for work that explored how mass media shapes public perception—often co-opting and subverting the techniques of advertisement to reveal the tropes underpinning popular imagery. In Simmons’s view, the propaganda machine is equally present today, but its landscape has shifted: “With advertising, I feel there was a period when we paid a great deal of attention to it, and tried to understand and dissect the messaging,” she recalls. “People can’t be outsmarted by advertising anymore, because they’re too busy being outsmarted by the lies on the internet. I often say that the 21st century is supplying me with a lot of material.”

Even as she surveys new territory in her art, there are certain themes Simmons returns to: She always has an easier time working with female subjects over male subjects, and at one point scrapped a version of Color Pictures/Deep Photos that featured male porn stars. So, too, does she favor the use of objects, dolls, or surrogates over real people: “I have a staunch refusal to let go of artificiality; there has to be something constructed or fake,” she says, recalling a series of portraits with human models in which she asked them to close their eyes, and painted new ones over their lids. “There always needs to be some point of resistance within the photo.”

Despite her penchant for drawing attention to the construction of images, Simmons often finds herself aiming for perfection in their execution. It’s a quality with which she has a complicated and ever-evolving relationship. “I’m often gathering objects that don’t really sync,” she says, describing the inherent limitations of an artistic practice centered on analog methods. “I try as hard as I possibly can to make it perfect. But I’ve come to accept that it doesn’t always work out—and the doesn’t-always-work-out part is what makes my work what it is.” 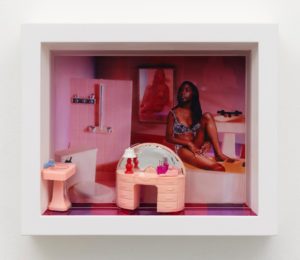 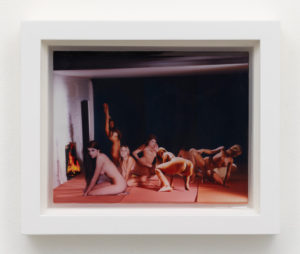 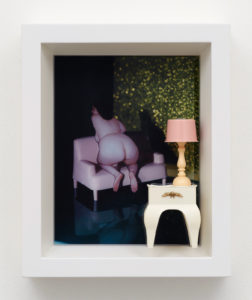 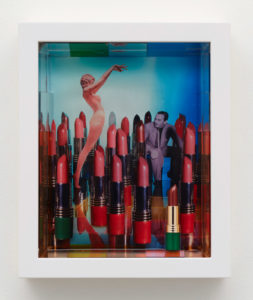 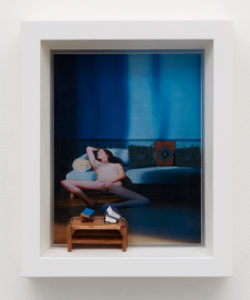