Upon the brand’s 70th anniversary, the designer joins the ranks of Rick Owens, Hiroshi Fujiwara, and Giambattista Valli to riff on the iconic outerwear silhouette

This past weekend, creative multihyphenate Pharell Williams joined the ranks of Thom Browne, Hiroshi Fujiwara, Rick Owens, Pierpaolo Piccioli, Francesco Ragazzi, and Giambattista Valli as one of the seven designers enlisted to reimagine the iconic Moncler Maya 70 jacket, in celebration of the brand’s 70th anniversary.

Originating in the 1950s, the Maya 70 is a classic symbol of Moncler’s mission, and its evolution over time; born in Monestier-de-Clermont, France, the brand’s original intent to protect alpine workers from biting cold moved forth into the folds of high fashion, resulting in garments at the height of functionality and exceptional design. Pharell’s reimagination of the Maya 70 bears the jacket’s timeless silhouette, cut from black rubber and dotted with miniature versions of the Moncler logo.

The artist selected rapper ​​Tobe Nwigwe to model his iteration of the design. “I feel like he’s just a trailblazer, in terms of doing things that make sense for him and his archetype,” the designer said. “He has a super strong sound.” The choice is a prime example of fashion and music’s symbiotic relationship, which has defined Pharrell’s career since its early days—and a testament to his role as a bridge between mediums and industries. “Collaboration is always an opportunity to learn something else,” he said. “It’s not worth doing if it’s not on the precipice of burning everything around it.” 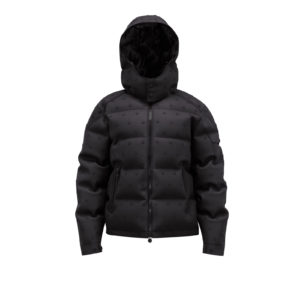 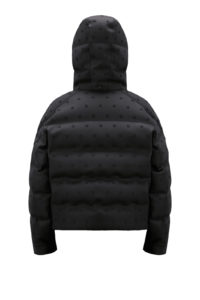 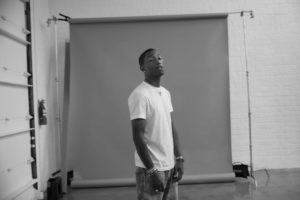