The artist joins Document to discuss high school, her alter ego, and the making of her latest album

If you ever want to shake ass to a violin, look no further than Sudan Archives—the experimental project of musician Brittany Parks. She’s a self-taught violinist, songwriter, and producer who fuses disco and electronic sound with West African rhythms. Her debut album, Athena, is a lavish compilation of hypnotic tracks, which the artist used to refine her sound. But her latest record, Natural Brown Prom Queen, sees Parks’s fully-realized potential, with lively anthems for the girlies.

At 19, Parks moved to Los Angeles, where she fostered her musical talent in the city’s late-2000s beat scene. She was 2,100 miles away from her childhood home in Cincinnati. The move was necessary for the artist, though she’s always missing her home, family, and friends. With Natural Brown Prom Queen, she channels this longing through the eyes of Britt—in Parks’s words, “the girl next door who drives around the city with the top down, and shows up to high school prom in a pink furry bikini with her thong hanging out her denim skirt.” Britt is an exaggerated version of teenage Parks: fearless, vulnerable, and always filled with joy, despite her sometimes somber lyrics. She closes her album with a reference to home: a spin on the Notorious B.I.G.’s “Going Back to Cali,” called “#513” after Cincinnati’s area code. “I’m going going, back back, to Cincin-nati,” she sings.

Natural Brown Prom Queen is nearly an hour long, with 18 tracks ranging from nostalgic ballads and ethereal voice-overs to seductive funk and hot girl rap. Her music often resembles the genre-blending work of artists like M.I.A., FKA twigs, and Solange, with the added presence of traditional Sudanese sound. Parks’s almost life-long admiration of folk music emerges as a powerful influence across her work, differentiating her from the banal qualities of modern pop. In her music video for “Selfish Soul,” she fiddles on a suburban roof holding pom-poms, and hangs upside down while dancing on a pole.

Ahead of the release of Natural Brown Prom Queen, which debuts September 9, Parks joined Document for a conversation on the making of her album, teenage suburban life, and the fact that the violin is Black as fuck.

“The best way I can communicate and express myself is through music. I end up feeling like I’ve healed myself after putting my thoughts out in a musical way.”

Madison Bulnes: What does ‘home’ mean to you? Why did you decide to use it as an overarching theme in Prom Queen?

Brittany Parks: Home is where you were raised. I was basically homesick, so that’s the theme of the album: missing my community.

Madison: When was the last time you visited home?

Brittany: I had a show there recently, like four months ago. It was my first time headlining a festival there. It was small, at a park. I didn’t really get to hang out, but I did see a couple of family members.

Madison: How did you make the thematic jump to prom?

Brittany: I didn’t go to prom when I was living in Cincinnati. I don’t regret it, but this whole concept is about reclaiming high school life. That’s where the narrative takes place.

Madison: Do you think the Britt who you created is similar to who you were in high school?

Brittany: Yeah. I feel like she’s always had this punk, I’m going to do it myself [persona], but now she’s just more confident in that.

Madison: Speaking of wanting to do everything yourself: I know that was a big part of why you didn’t become N2—your step-dad’s dream pop duo—with your sister.

Brittany: My step-dad [wanted to run things in a] very specific way. He knew how to make pop music, and how to help artists. He was saying, ‘You don’t have to be part of the production. You don’t have to worry about that part.’ I felt like that was part of my identity as an artist, being very involved in the production. I turned out to be right, because I am a producer. I wasn’t at the time, but I knew that I wanted to get into that world. I wanted to buy gear, I wanted to figure out how it worked. I was really inspired by electronic music. For that, you have to be really tech-savvy. 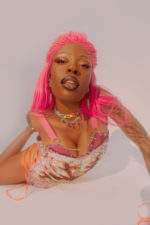 Madison: You’ve lived in both Cincinnati and LA. How do the influences of those cities come together in your work?

Brittany: The most important scene in LA [for me] is the electronic beat scene. My boyfriend, All City Jimmy, was a huge part of it. He basically started Low End Theory. When we were younger, in Ohio, we were always talking about Low End Theory and how we wanted to play a show there. There’s a huge experimental underground scene in LA, which is very supportive of avant-garde art.

Being from Cincinnati, the middle of nowhere—learning violin there, and discovering fiddle music, and ending up at a school that has a fiddle club—influenced me at a young age and made my musical tastes very broad. Now, I’m able to genre blend, because it comes naturally.

Madison: What is it about string instruments that initially appealed to you?

Brittany: I’m from a country background, where people were coming in and trying to get us to learn the violin. They weren’t trying to get people to learn guitar; there weren’t any guitar classes. I always thought I was an outcast, because I was the only Black girl playing the fiddle. But when I moved to LA, I discovered that the violin is actually Black as fuck. It’s an African instrument dating back to the 1950s, which is why I wanted to be an ethnomusicologist. A lot of people think the violin is an Italian-made instrument—a very white, Western thing—but really, it’s Black as fuck.

Madison: Do you think that the instrumentals essential to Sudanese music will eventually have a place in mainstream Western sound?

Brittany: I think it always has. People from Sudan were inspired by James Brown and funk—so they started making Habibi Funk. They were inspired by what Black people were doing in America, and vice versa. There’s always going to be someone—some girl like me—who’s obsessed with Sudanese music. And there’s always going to be someone over there who is inspired by what people in other places are doing. That’s what’s so cool about music. It’s interchangeable.

“A lot of people think the violin is an Italian-made instrument—a very white, Western thing—but really, it’s Black as fuck.”

Madison: What was it like making an album spanning a wide range of genres, and using a mixed-media approach featuring stems from—at the time—anonymous contributors?

Brittany: I really like doing [collaborations] that way, because I feel like everybody’s a little judgmental. I usually make music by myself, or I have to have a strong connection with someone before I want to make music with them in person. That’s because of my own anxiety and values. I can’t be around certain types of energy. The way I did it was, if I was feeling anxious or didn’t want to leave the house, I didn’t have to. I could just mix everybody’s stems together and take away and add what I wanted.

Madison: How do you navigate being in the public eye when you have these anxieties?

Brittany: I’m still trying to figure it out. I’ve been journaling every day, because I heard it’s really good for you. I’m trying to take all the advice that I’m getting. Even if it doesn’t feel like a lot now, I want to get into a routine where, when it does get too much, I already have the tools I need to stay sane.

Madison: Do you also use your songwriting and lyrical process to figure that stuff out?

Brittany: I feel like the best way I can communicate and express myself is through music. I end up feeling like I’ve healed myself after putting my thoughts out in a musical way. 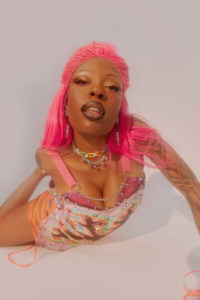 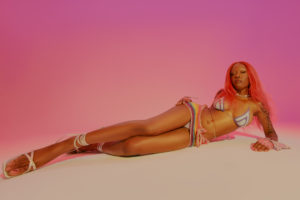