The painter’s latest exhibition, ‘Indicator,’ utilizes the close-up as a gateway to emotion and uncanny points of view

“Sidewalk, grate, outlet, floor,” begins a statement from James Fuentes Gallery, home to artist Keegan Monaghan’s latest exhibition, Indicator. “A subject so tightly cropped it becomes a quiet enigma as seen from outside, a world built upon the foundations of either what we can’t see, or of only what we can.”

Simply put, the perspectives that Monaghan chooses to employ are typically close-up, mundane, and free from context. His subject material becomes a world in itself, or else implies action just beyond a painting’s bounds. He gravitates towards barred windows, lampposts, sun-dappled walls and streets. “I’d like the paintings to position the viewer in an emotional vantage point,” Monaghan reveals to Document. “I’m trying to create an empathic view that implicates the audience.”

It’s the Evanston-born, Brooklyn-based artist’s third show with James Fuentes, having previously exhibited at Parker Gallery, the Whitney Biennial, and Simone Subal. “I’m still utilizing the close-up as a compositional and psychological device,” he says of his newest work, “but there is a greater emphasis on atmosphere, light, and pathos.” Ahead of the show’s much-anticipated opening this Wednesday, Monaghan met with Document to discuss quotidian imagery, Elizabeth Murray, and his uncanny point of view. 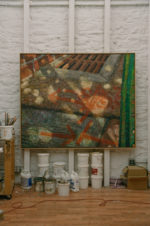 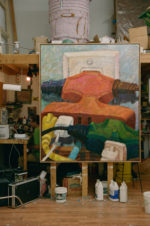 Morgan Becker: This is your third exhibition at James Fuentes. How does this show depart conceptually from the other two? Have you found that showing in the same gallery space reveals connections between your bodies of work that might not have otherwise been apparent?

Keegan Monaghan: I’ve been thinking of this new work as a continuation of the last show I had at the gallery. It was the height of the pandemic—everything felt charged and unknowable, and I wanted the paintings to embody that feeling. While my first show with the gallery featured narrative-based scenes involving figures, the work in the second show was composed almost entirely of closely-cropped imagery that was framed to exclude context, so that the action of the scene was happening beyond the edge of the picture. The close-up also became a way to avoid overt figuration while simultaneously depicting the body. Instead of painting a person, I painted the button on their shirt. This also became the functioning metaphor of the work: the idea of focusing on details, looking at something closely until it gives way to abstraction.

These new paintings are preoccupied with similar concepts. I’m still utilizing the close-up as a compositional and psychological device. Figuratively speaking, the imagery still depicts the human body, but there is a greater emphasis on atmosphere, light, and pathos. Looking back at the other two shows, I see an attempt to generate a slower-forming picture—something with a softer resolution that takes longer to see and requires space and distance to become fully legible. Ultimately, it’s still headed towards abstraction, though I’m not yet sure what eventual form that may take.

Morgan: You tend toward rich color and dense, detailed texture. What role does that sort of vividity play in your work?

Keegan: The picture in my head has a specific emotionality or feel, but the actual image is still fuzzy and obscure. I’m trying to get it right and find the image, and the painting process becomes a series of corrections and edits. The painting grows out of this process, like sedimentation. Sometimes it takes up to a year of working on something, moving pieces of the composition around over and over until the surface eventually resembles something like a shag carpet. I want all those decisions and mistakes to be embedded in the psychology of the painting. The color works similarly—it’s not one color, but many colors stacked up on top of one another, mixing optically. This has to do with my desire to make a slow image that reveals itself in different stages, something that registers immediately from afar but dissolves as you walk closer. Again, I see this as a kind of metaphor for the act of looking.

Morgan: Uncanny points of view are a repeated feature in your work. Do you mean that to be destabilizing? What kind of mood do you hope it invokes in the viewer?

Keegan: I’m not sure I would use the word destabilizing. It’s more about creating a psychological perspective. I’d like the paintings to position the viewer in an emotional vantage point. I see the painting as a window, and I’m trying to create an empathic view that implicates the audience. Certain imagery has a strong level of anxiety associated with it, like a bright red indicator light or an overstuffed outlet. It can work as overt metaphor. But it’s also mundane. To me, that is an interesting intersection.

Morgan: What types of scenes and objects do you gravitate towards in deciding what to paint? Are any of them purely imagined?

“Instead of painting a person, I painted the button on their shirt. This also became the functioning metaphor of the work: the idea of focusing on details, looking at something closely until it gives way to abstraction.”

Keegan: I tend to gravitate towards quotidian imagery—the seemingly unremarkable things that surround us. Most of my ideas come from walking around and looking at things in the world. Because I live in New York, the imagery often evolves around details of the city: a brick wall, markings on a sidewalk, shadows on the floor of my apartment. I make drawings of these scenes from memory, and sometimes the imagery is entirely imaginary. I don’t work from photographs because I’m interested in the mediation of memory, and I like the way I may have gotten it wrong. These idiosyncrasies are revealing and can provide unexpected revelations. Lately, I have been thinking about making paintings in which it’s not entirely clear what is being depicted. For example, a painting of an imagined piece of machinery with an unknown function. I also paint plein air and have an ongoing project of making fast, one-sitting observational paintings of newspapers. I have been thinking of these as existing between still life and abstraction.

Morgan: Your main medium seems to be painting, but I also really admire your ceramic work. Do those mediums feel like separate entities for you, or does one practice translate to the other?

Keegan: They are definitely related. For me, painting is very slow and elusive. I often feel on the verge of failure, and it’s an arduous process of trying to dig myself out of the hole I’ve created. I once heard Elizabeth Murray say something to this effect in an interview, and I’ve always deeply related to it. Solving one issue in the painting opens up a series of other problems. But at its core, it’s always about working and reworking until it feels right. Ceramics, on the other hand, feel much more immediate. The process of glazing can sometimes feel similar to painting, but the outcome is very different, and becomes entirely inert upon firing. What I like about the glazing process is the level of mystery involved. It may be due to a lack of experience, but I’m always surprised with the result after taking it out of the kiln. There’s a transformation that happens overnight and it’s seldom what was expected. 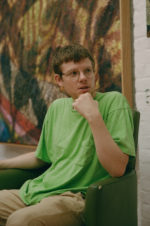 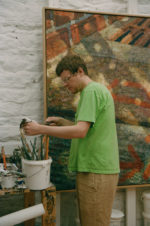 Morgan: Who are some of your artistic influences?

Keegan: Elizabeth Murray, Pierre Bonnard, Jack Whitten, Robert Gober, Van Gogh, Monet, Susan Rothenberg, Thelonious Monk, Philip K. Dick. Too many to mention, really, but these are some of the artists I often think about while in the studio.

Morgan: How do you find inspiration outside of the studio?

Keegan: I like to make music with people. Lately, I have been doing lots of free improvisational playing with friends. My studio practice is very solitary, and music is a very satisfying way to collaboratively work with other people. For me, free improvisation can feel casual and almost automatic. The intention isn’t necessarily to make a finished piece, but just to experience the social dynamics of making and reacting to sounds with other people.

Keegan Monaghan’s Indicator will be on view between September 21 and October 22 at James Fuentes Gallery. 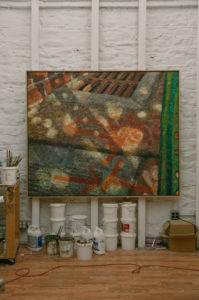 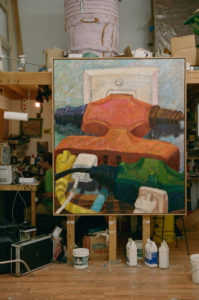 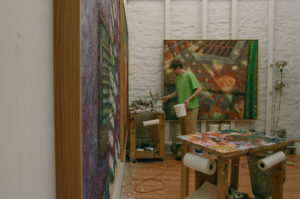 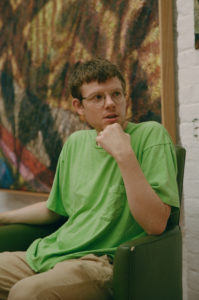 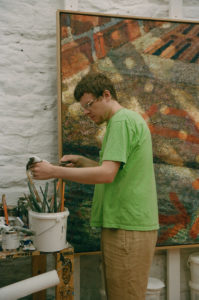 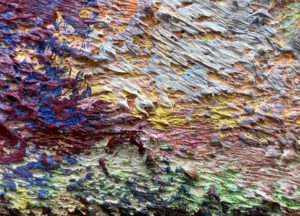