It began in 2016 with Arya Ghavamian making Iranian stew and being really sad. The dish, Ghormeh Sabzi, takes up to eight hours to make; the ingredients are sautéed herbs cooked with kidney beans, onions, black lime, and turmeric-seasoned lamb or beef over either a Persian rice called polo, or tahdig. In his Chinatown apartment, Ghavamian shared this dish with an amalgamation of fellow homesick Iranians, some of whom he met through Facebook Messenger when he moved to New York. Others he came across while roaming local cafés or on the streets taking pictures. “The house parties were filled with an eclectic mix of people and cultures, and everyone left feeling nice and warm,” says Ghavamian.

Then, on the eve of the Iranian New Year holiday Nowruz, everything changed. Home Sweet Home, a dive bar on Chrystie Street, let Ghavamian graduate his parties to its space with his friend Mani Nilchiani to supplement a sparse Monday crowd. People came. Late into the morning, Ghavamian departed from the safety of surefire tracks to play the song “Goriz” by the Iranian singer Ebi. “I looked up and I saw that people were sitting with each other, making out, and having such a great time while I’m playing this very beautiful, lush, romantic Iranian music. People were connecting with it, and it really blew my mind. It was this understanding that, Okay, music can create this space, and translation beyond language can happen if you create the right moment. Just seeing these people have so much fun with something that for years I thought was worthless—because it couldn’t connect with people—was so cool. Knowing I witnessed this connection is still, to this moment, what actually moves me forward.” That night, there was a paradigm shift for Ghavamian; now, there is Disco Tehran.

Disco Tehran, the collective founded by Arya Ghavamian and Mani Nilchiani, calls itself a funky, warm dance party and live performance project that connects New York to the era of 1970s discotheques in Tehran. Its founding story is kindred to many immigrants’ in New York: two people making sense of the complex political and social realities of where they came from. The project is inspired by the oral histories passed down from Ghavamian and Nilchiani’s parents, who were part of Tehran’s artistic scene during the ’70s, which came to an abrupt end after the Western-allied government was replaced by the Islamic Republic. Although they note the importance of representation, Disco Tehran’s founders are less concerned with focusing on their Middle Eastern identity. Rather, they aim to channel the pain brought on by identity crisis as immigrants to the US, and to fill a hole they’ve noticed in New York nightlife—spaces that provide any real sense of belonging. For Ghavamian, incorporating world music—and bringing these parties across Europe and the Americas—is the antithesis to what he grew up with in a blockaded and embargoed country.

“Something that connects cinema and disco is this fact that there are ephemeral shows that pop up, happen, and they’re gone… Cut to silence and serenity. Until the next one.”

Both the early birds and newcomers to Disco Tehran’s largest party to date in Maspeth, Queens, are interested in global music and culture; less profoundly, they just want to dance. During the set by Habibi—a band that intertwines Farsi with English by way of apathetic, meditative vocals reminiscent of ’60s girl group pop—the audience isn’t a sea of screens recording identical videos. A vermillion glow rests on the humming crowd, its constituents seem decidedly less Machiavellian than the New York nightlife I’m accustomed to. Around the warehouse walls are papers posted loosely about a secret rave. My friends and I ask about the rave’s whereabouts to other partygoers, the bathroom attendant, the bouncer, who all direct us further along a pinball trail. We reach a bartender wearing orange acetate aviators who is more concerned with cajoling us into shots than genuine conversation. He assertively answers: The secret rave is in your mind.

What sets Ghavamian apart is that, when met with the challenge of coping with his relative exile from his home in Iran, and the difficulty of finding genuine connections with others as an immigrant in New York, he refuses to accept isolation. Perhaps this is because he’s all too familiar with this feeling, as someone who grew up in a country marked by isolationism in recent decades. “It’s me taking agency over life,” he says. “When I was living in Iran, I was very unhappy, and when I lived out of Iran, I was very unhappy. I had this feeling of not being accepted. There is this narrative of power in the world that dictates what is worthy, what has market value, and what doesn’t. All of this dictates patterns of behavior, and the ways people connect to each other. Coming as a person from Iran—an immigrant—and finding myself within this void where nothing that I have grown up with has any kind of intrinsic value in this country or in the West… It creates this dichotomy. This is not conducive to a happy life. So I had to find a way to fix it.” Nilchiani adds, “It was a do-or-die situation; when you don’t feel that sense of belonging, you just have to create it.” 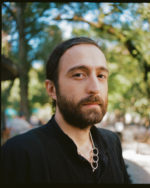 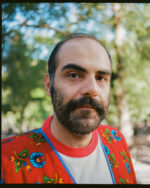 But don’t let the name Disco Tehran fool you—the founders have had their sights set on film all along. “It’s always been about cinema and disco,” says Ghavamian. Since 2014, he has been working on The Candy Store, a documentary film that follows East Village staple and Iranian immigrant Ray Alvarez. Disco Tehran has channeled the majority of its income into saving for this documentary film, putting the remainder into either social work—such as its recent initiative, East Village Loves NYC—or investing it into independent Iranian films through its sister project, Cinema Tehran. Nilchiani says, “My observations of our conversations over the years can be reduced to a few sentences. And in that way, something that connects cinema and disco is this fact that there are ephemeral shows that pop up, happen, and they’re gone. Yes, there’s documentation of it; you can look at Instagram or whatever to see what happened. But it’s something that happened there, with the people, with the music, with the food that is sometimes served. It’s a very special concentration of energies; it comes together and ends as if it never happened. Cut to silence and serenity. Until the next one.”

For a long time, people in the United States and Iran have written off nightlife and dancing as insubstantial and even immoral. There was the New York City Cabaret Law from 1926, which made dancing illegal in a vast majority of the city’s restaurants and bars until it was repealed in 2017. During the COVID-19 pandemic, a number of jurisdictions in the US specifically prohibited dancing as a public health measure. According to Iran’s penal code, public dancing and singing are not illegal, but authorities can arrest an individual if they deem the acts to be indecent. Nilchiani believes that dancing is a necessary antithesis to otherwise dire times. In fact, he argues it was vital for his family growing up. “Iranian families back then were getting together and creating these moments of joy and celebration, at a time where everything looked super bleak. We were blockaded, outside of reach from the rest of the world, and our neighboring country was dropping bombs on our capital. Every family either had members on the front lines of this war, or behind bars because they were political prisoners who took part in the revolution and were cast as the enemies of the state. So this is a very bleak background against which dance becomes a survival mechanism.” For the founders, this nurturing of connection—through the softer elements of humanity, such as dance and film—seems to be the most rewarding aspect of Disco Tehran’s work. They not only share a culture that invasion, revolution, and dogmatic oppressors have attempted to eradicate, but they are taking it a step further than many academic and non-profit institutions do through deliberate acts of movement, eating, and pleasure.

In the mid- to late-’70s, Iran experienced a golden era of film. There is a street in Tehran called Laleh-Zar, believed to be inspired by the Champs-’Élysées following Naser al-Din Shah’s first visit to Europe in 1863. Fast forward to the mid-20th century, and Laleh-Zar had blossomed into a hub for Iranian nightlife, hosting roughly 16 cinemas and numerous discotheques and cafes. These cinemas aired new art and new Hollywood films, thanks in part to many Iranians bringing back the latest dubbing technologies from their studies in Italy. In fact, some indicate that one of the sparks of the Iranian Revolution in the late-’70s took place at a cinema, the Cinema Rex. Many cinemas were viewed as symbols of decadence by revolutionaries, and perhaps Iran would have completely done away with them if it weren’t for one of the leaders of the revolution watching The Cow by Dariush Mehrjui. The revolutionary powers at the time changed their minds about film after witnessing how it could serve as a vessel to depict people’s suffering. Of these cinemas, only a few remain, and most sit abandoned after their owners left the country. “In the same way that one film saved the entirety of the Iranian film industry, Cinema Tehran is [part of] this parallel-universe reemergence of the golden era of theater in Iran,” says Ghavamian.

“I think everything starts and ends with dreaming and imagining. Nobody, not even the most cruel dictator, can take away the power of human imagination.”

Both men have cited some sort of generational FOMO as the leading source of inspiration for the collective. For years, their parents passed down cherished memories of Iran during childhood and university. Ghavamian recounts when his father brought him a copy of 2001: A Space Odyssey, which they watched together on a 21-inch television at home. “He was telling me, ‘Oh, you know, I watched this in the cinema in the ’60s. It was a big screen, can you imagine it?’ Just having this [realization] of, Oh my god, my dad watched this and I can’t. I will never be able to watch it if I stay in this country.”

With family memories serving as the collective’s greatest catalyst, who else could be the parties’ biggest fans but the founders’ mothers? Looking forward, besides hosting Cinema Tehran events, the duo is launching an upcoming clothing line with Ghavamian’s mom, Maryam. Called Maryam by Disco Tehran, it’s inspired by colorful textiles that Maryam created for Ghavamian to wear at his film screenings and parties. All handmade, the limited edition collection will be available through private inquiry on the collective’s website.

“I think everything starts and ends with dreaming and imagining,” Ghavamian says. “Nobody, not even the most cruel dictator, can take away the power of human imagination. If we fall in love with the dream, we can make it into a reality. Once, my friend Ray [of Ray’s Candy Store] told me that dreaming is like vacation for the mind. He’s 90 years old and dedicated to these vacations. I always wonder what they look like.”

Call it what you want: stubborn, visionary, poetic. It’s really all the same. Perhaps Ghavamian and Nilchiani will never attain a precise vision of what Iran’s cinema and party scenes would have been. But they are creating something needed in a tangible present, and that’s enough.

Disco Tehran’s next party will be on October 7 at Avant Gardner in New York City, with live concerts by Vieux Farka Touré and Yasser Tejeda. Tickets are available here. Cinema Tehran’s next installment, co-curated by Alireza Ghasemi, will be on October 26 and 27 at Anthology Film Archives, and will feature two films by Iranian filmmaker Rafi Pitts. Tickets are available here. 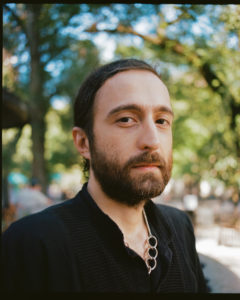 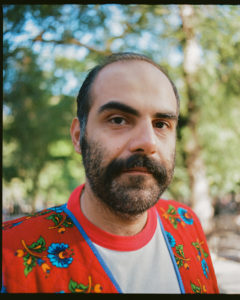