Good art is often made lesser in its exhibition—framed by the sterility of white walls, its audience can struggle to immerse itself fully in its aesthetic and thematic intrigue. The harsh light extends to their faces, producing the feeling that they, too, are on display. Charles Atlas’s The Mathematics of Consciousness, a half-hour-or-so-long projection, rejects the customs of the traditional gallery space. It’s bordered in part by covered windows, and in part by the brick wall of the expansive main hall at Pioneer Works. It’s a site-specific installation in the truest sense of the phrase, built for the architecture of the space it lives in. The exhibition is made stronger, and more immersive, by an original score from musician and collaborator Lazar Bozic. A predetermined length for viewing—which requires the rest of the room’s darkness—lessens the anxieties surrounding the act of consuming art, and consequently, the art itself can truly take center. 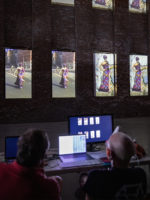 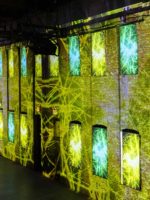 A pioneer in the field of “media dance,” Atlas makes work that merges the art of film with that of choreography. His experimentations have maintained avant-garde sensibilities in the decades since he began his practice—perhaps, in part, because of the ease with which the artist embraces new technologies. This tendency is upheld in The Mathematics of Consciousness, as Atlas’s projection “toggles between numerical fantasies, dance sequences, abstract compositions, scientific ruminations, and internet memes.” These images, composed of archival and new material, flicker across the wall, divided into left and right sections alluding to the brain.

His merging of seemingly disparate forms is mirrored in the concept of the exhibition, which uses math and science for the sake of art, effectively calling into question the boundaries between the disciplines. The thematic questions the installation poses are made explicit through interludes of philosophical musings. “I consider space and time to be my media,” Atlas explains in a press release. “And this has led me to a fascination with physics, consciousness, and cosmology—scientific themes woven together with my sustained interest in portraiture, performance, and dance.”

The Mathematics of Consciousness is on display at Pioneer Works through November 20. 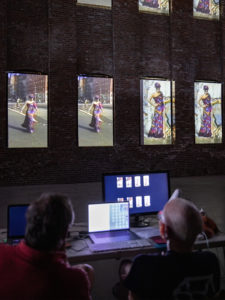 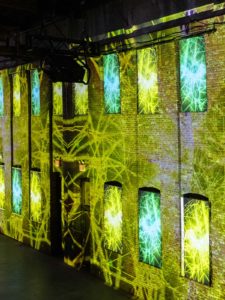 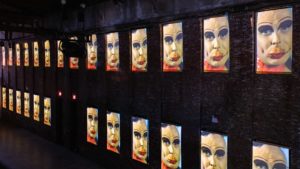