The show’s star Gugu Mbatha-Raw joins Document to discuss the nuances of her character, the evolution of mystery, and a mass grappling with identity

On paper, the plot of Surface carries a level of drama that reaches soap opera standards: an attempted suicide that might have actually been attempted murder, a steamy affair, shifting allegiances, and a memory loss-induced identity crisis. But reviews of the series have been largely choral, agreeing that its pacing feels slow, not indulging in the hyper-saturation in plot typical of such series. Its star, Gugu Mbatha-Raw, cites its intrigue as more mysterious than splashy. “There is an introspection and a nuance to the world, because it’s complex and detailed,” she explains. “That doesn’t mean it’s gentle.” While labeled a psychological thriller, the show’s depth derives more from its exploration of identity and its potential to change than from a dense dexterity in plot.

Mbatha-Raw’s character, Sophie, is introduced after a traumatic head injury. She doesn’t remember the incident, or really anything else. The Apple TV+ series tracks the unfolding of Sophie’s past as she tries to make sense of conflicting stories from the people closest to her. For Surface’s protagonist, who has little context or understanding of the person she was, self-discovery carries entirely new meaning. In elevated and modernized form, the show addresses a long-contemplated question: Are our personalities innate, or do we have control over who we are and who we are capable of becoming?

Following the show’s premiere, Mbatha-Raw joins Document to discuss the nuances of her character, the evolution of mystery, and a mass grappling with identity. 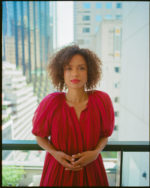 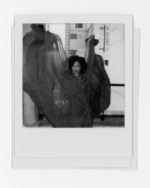 Megan Hullander: How do you build a character who doesn’t even know herself?

Gugu Mbatha-Raw: I mean, that’s the challenge. Obviously, we get to know a lot more about Sophie’s past and who she actually is [throughout the series]. But in terms of actually playing her, it was a nice opportunity to embrace the more sensory elements, like the idea of muscle memory. Even if you don’t know a lot of the details of your life, taste and smell and sight take you back to a more childlike energy. Those things are that much more visceral. So that was kind of something that I used to make it feel very sensory. Being able to rebuild from a blank slate is always fun, because it really gives you a strong arc.

Megan: Looking at the whole of your career, there’s a lot of versatility in the characters that you’ve taken on. What parts of yourself, if any, did you allow to come through with this character?

Gugu: I’ve got a variety of projects now that I’ve done—certainly in terms of the genres and styles—but you might see some common threads. That’s the fun of acting, really—it’s not really about you. It’s about getting out of the way. But I think, without meaning to, you bring a great deal of yourself to every role, good and bad.

Megan: There’s a longstanding appeal to psychological horrors—what does Surface bring that feels different from its predecessors in the genre?

Gugu: Sophie is not solving somebody else’s mystery. It’s not a male protagonist, she’s not the damsel in distress, although obviously she’s been through a very stressful event. She really is the center and she really is the mystery, and I’ve never seen that before. For me, what’s interesting about this show, and what made it feel fresh when I read [the script], is that it’s really about the point of view. I feel like this is such a modern twist on that genre, because, as I say, Sophie really is on a journey of empowerment, which I think is really refreshing.

Megan: There’s a sort of gentleness to the way the story unfolds—one that maybe is more noticeable with the frequently saturated nature of contemporary television. How do you think the pacing suited this story?

Gugu: I wouldn’t describe it as gentle. I think there’s a lot of twists and turns and surprises. And I think that it’s kind of a propulsive ride, because we are in her mind. There is an introspection and a nuance to the world, because it’s complex and detailed. That doesn’t mean it’s gentle. There are a lot of twists and turns, and every episode keeps you guessing. I would say it’s more intriguing and mysterious.

Megan: Do you think there’s anything about this story specifically that feels suited to the moment it’s coming out in?

Gugu: Certainly, in the time that we made it: in 2021, in the midst of the pandemic, the idea of having a new, clean slate, the idea of a new life. We’ve had such a traumatic and disruptive few years in terms of our rhythm of life—not to compare it to Sophie’s situation, but I certainly would say that a lot of people got a new perspective. There really is such a thing as a fresh start—you change your rhythm if you change your life. If you’re starting again somewhere, as Sophie is, are your secrets going to catch up to you?

Surface is available to watch now on Apple TV+ 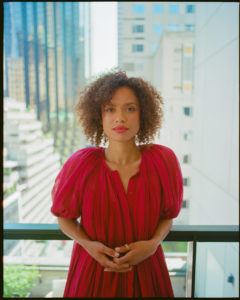 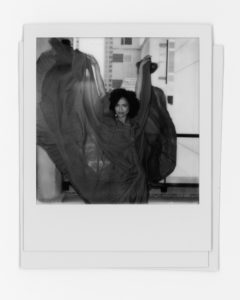