Originally the business mastermind behind Vetements, Georgian designer Guram Gvasalia oversaw operations while his older brother Demna, now the creative director of Balenciaga, constructed the creative vision of the brand. Gvasalia was appointed creative director of Vetements and VTMNTS in late 2021, but was unable to present a physical presentation due to pandemic restrictions. This couture season, in his first runway show as creative director, Gvasalia crafted a highly personal presentation of mens and womenswear, which he described as, “a summary of my childhood memories, war trauma, hidden desires, and twisted imagination.”

Gvasalia’s in-depth show notes, written by himself, read with the resonance of a personal diary, as the designer broke down creative choices and the poignant instances that inspired them. A deconstructed brown shearling look was a nod to a patched-up teddy bear, the single toy Gvasalia was able to keep as a child that had not been destroyed or left behind when he and his family fled the Georgian Civil War in the ’90s. Check blankets spoke to those received at a refugee camp in place of outerwear. A childhood obsession with Kim Basinger (whose daughter, Ireland Baldwin walked in the show) and her siren-like turn in 1997’s LA Confidential was alluded to in the old Hollywood glamor and cascading blonde waves of a head-to-toe powder pink three-piece suit. Even the extreme-punk hairstyles, some of which seemingly stretched miles from the head, emerged from Gvasalia’s childhood reverie, an avenue of escape from his circumstances. 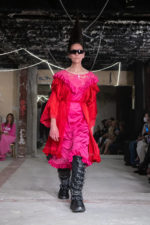 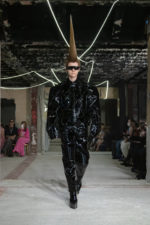 The blue, red, and black check in top-to-toe tailored looks reference the material Gvasalia would make his first designs from, knock-offs of the print used in iconic laundry bags made by Tati, a low-budget Parisian superstore and retail institution, which recently went bankrupt, leaving the half-stripped bones of a interior construction sight an eerie setting for Vetements’s collection.

Despite the dark roots of the collection, Gvasalia ends the show notes optimistically: “After all I’ve been through in my life, the good and the bad, I truly believe there is a higher power that protects us and loves us. The only thing is to believe in yourself, even if you are a boy from the middle of nowhere, ripped of your childhood and many other things, that one day dreams can come true. There is always an Afterlife; life after the pandemic, life after the war, life after life after life…” 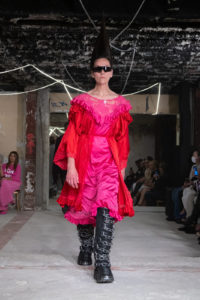 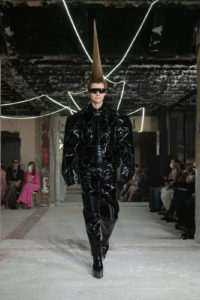