Yesterday at La Poste du Louvre in Paris, Issey Mikaye presented Flowers and Vases, its Homme Plissé Spring/Summer 2023 collection. The show was directed by Rachid Ouramdane, director at the Théâtre National de Chaillot, and featured a mixed cast of models and performers. Acrobats from the Compagnie XY stoop atop each other’s shoulders, embodying a non-traditional approach to the fashion show where no space is out of bounds: the vertical is accessible, and the runway has no set course. 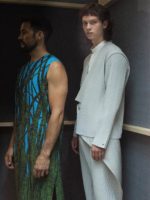 Aptly named, the collection drew inspiration from the forms of flowers and vases. The FLIP series, for instance, boasts upside-down, snap-fastened pockets, whose functional design is derived from the process of a blooming bud. The VASE series emulates the shape of a robust vessel, presenting gradual, subtle curves that taper in at the neck. Issey Miyake’s signature pleats appear in formalwear sets, customizable pants, and oversized tunics. The COTTON BOLLS print series is a break from solid color, introducing plant-inspired motifs on jackets and sleeveless tops.

“The show expresses the duality found in the collection in a performance that is both still and dynamic, steady, and swift,” reads the label’s press release. “The design explores the contrast between flowers and vases, thereby introducing a collective presence that is subtle and yet strong.” 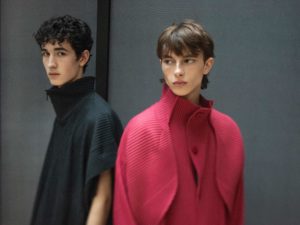 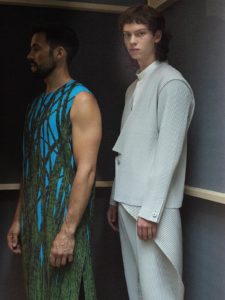