In awe of the permanence in power of Egyptian temples, the designer seeks to match their tranquility amid chaos

Under the blistering Parisian sun, crisp cottons and layers of silk chiffon offer escape from socio-political turmoil and fashion week-induced gridlock traffic. A tranquil aura dominates Rick Owens’s latest menswear collection. Amidst what often feels to be end-times, the Italian-based designer found peace in turning to that which has outlived human life cycles, and has the potential to outlive the human race entirely. But the line’s quiet simplicity doesn’t completely disregard the conflict that dominates the 21st century, with coats tailored with extreme shoulders and silhouettes built in exaggerated shapes.

“I had recently retreated to Egypt where I found great comfort in the remoteness and scale of its history. My personal concerns and global discomforts felt petty in the face of that kind of timelessness,” Owens explained in a press release. “Lying down in the dirt with the valley of kings within view was a perspective I liked. The temples, started by one civilization, seized and added onto by another, completed by another and then unearthed by yet another, were reassuring in their stoic permanence.” For Men’s Spring/Summer 2023, Rick Owens is pragmatic and sanguine at once. 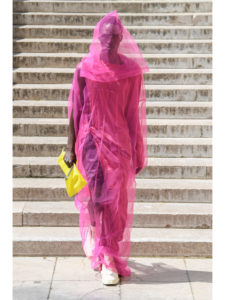 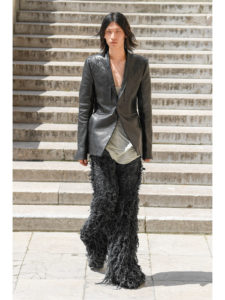