The painter’s debut solo show, on view at Jeffrey Deitch, interrogates the nature of self-image and cultural representation

In Sasha Gordon’s Almost A Very Rare Thing (2022), two figures sit across from each other in a boat floating on a dark blue pond, dotted with lily pads. They’re twins, and rough self-portraits of the artist herself, with enlarged, dark eyes and a slight pallor to the skin. The Sasha on the right offers a lock of hair, yanked from the back of her skull, to the Sasha on the left, who outstretches her hand in tentative acceptance.

The painting is one of the standouts from Gordon’s debut solo show at Jeffrey Deitch Gallery, which opened on May 7. The body of work, as a whole, rests at the intersection of real and surreal, embodying the “sense of unease that can occur when observing one’s own image, behaviors, and actions,” in the words of Deitch’s press release. 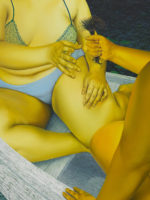 The show is titled Hands of Others: a nod to the outside influences that complicate autonomy, causing Gordon’s figures to act in the uncanny ways they tend to do. The hand manifests physically in the painting, disorienting its characters—it represents biracial Asian identity, body image, heteronormativity, and whiteness in turn.

The show is endearing—vulnerable, strange, and captivating at once. “By portraying different versions of her persona as both the subject and the observer carrying out her own judgments and self-expectations,” continues the press release, “Gordon’s work addresses internal conflicts and the psychological conditioning of cultural representation.”

Sasha Gordon’s Hands of Others is on display at Jeffrey Deitch’s Grand Street location through June 25. 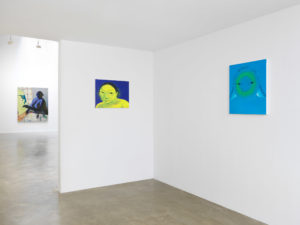 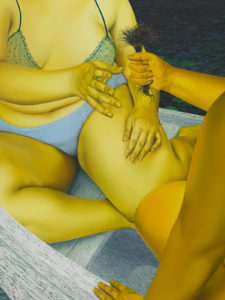 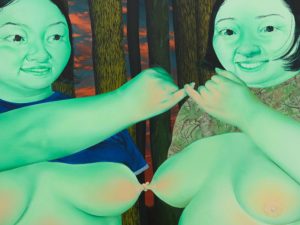