The singer and multi-instrumentalist created her debut single, ‘Amani Bombe,’ in collaboration with young musicians in Kinshasa

“In Kinshasa, I am the first female percussionist who really imposed herself on the music scene,” says Huguette Tolinga, Congolese multi-instrumentalist, singer, and community organizer. “You could say that I had to walk a lot before [younger female percussionists] could run!”

Tolinga is one of those artists who creates with community in mind, and quite literally alongside community. Her debut single “Amani Bombe” was written in collaboration with the youth of Kinsuka—a neighborhood in Kinshasa, the capital city of the DRC. “A lot of them were exposed to local issues, like the rise of bombe,” Tolinga explains, referencing a dangerous new drug that’s emerged in Congo in the past couple of years. Her recording studio, Huguembo, is in the geographic center of the epidemic, lending immediacy to the mesmerizing track, and ultimately coloring its meaning.

“Amani Bombe” carries the qualities of Afro House, moving between Tolinga’s own cool, repetitive vocals, and a horn section performed by bombe users themselves. The percussion persists throughout, much of it achieved by beating on plastic chairs and other nontraditional materials to create a singular sound. Here, the artist speaks with Document about the song’s accompanying video, learning percussion on her own, and recording as a solo artist for the first time.

Morgan Becker: What were you trying to convey sonically with ‘Amani Bombe’?

Huguette Tolinga: I was working on a project in Kinsuka, which is a neighborhood in my hometown of Kinshasa, DRC—where there is a river, plenty of people, yes, but it’s more calm than other places in Kinshasa. The project, which is run by a group called the Espace Masolo, consists of working with young people from the streets in Kin. A lot of them were exposed to local issues, like the rise of bombe. We teach them to be brass players to give them some supervision and inspiration. It’s a project that creates activities through music for these kids on the streets, and it has become very well known in Kinshasa.

The woman usually in charge of the Espace Masolo asked me to run it this time, so I worked with the young people. Everybody there loved our time together, I think. I suggested that we work on some original music instead of what they usually work on. We recorded outside as it got calmer into the night. The song we ended up making is ‘Amani Bombe.’ I had started it with [just] a guitarist, this local talent called Bebson, but we really completed it with the kids of Esapace Masolo that day. So sonically, it had to be natural—we used the tools at our disposal that day.

Morgan: How did you go about casting and directing the video?

Huguette: I asked my friend Laetitia Bouzouita, who immediately said yes! We shared some ideas, and then we did the casting in the streets locally to see who would participate. Some funny things happened: Laetitia wanted to use policemen in the video, and this gave us issues because the real police saw the dress-up police, and they were not happy that the actors were drinking beers on set. They stopped our shoot, and it took a lot of time to resolve.

Morgan: Can you tell me about the music scene in Kinshasa, and about your own role in it?

Huguette: I am a percussionist specialized in tam-tam, but [I play] a lot of different percussion instruments. I [also] sing, and I organize community workshops in a cultural context, and local, open jam sessions. I’ve got a studio called Huguembo, which is one of my artist names. A lot of people have started talking about it, and I realized that me and Huguembo Studio—we are one and the same now.

I’ve also done a lot of concerts in Kinshasa, and all over Europe. My name has really made the rounds in Kinshasa because of this work. When I made Huguembo Studio on top of this, people got excited to see what we would create there. A lot of people come down at all times of day, and this gave me the inspiration to do Jam Boom, which is the local jam session that brings everyone from the music community in Kinshasa together. We don’t have much financing, but the artists come and play even without it.

“I love what I do. If people respect my work, that’s enough for me as an artist.”

Morgan: I read that you’re an autodidact. How did you go about learning percussion?

Huguette: Yes, it’s true. I never learned any percussion instruments [formally]. It’s innate, because I’m born like this, with a tam-tam attached to the wall at my parents’ house. My dad often bought and sold local art, so my early life was filled with artists. Also, in my family, there are three musicians that sing, they also play the tam-tam, but they’re all men!

Morgan: What is it like playing percussion as a woman, as the craft tends to be male-dominated?

Huguette: I thought it was just in Kinshasa, Congo, where percussion was male-dominated. But since I started touring Europe with percussion troupes many years ago, I realize that everywhere I go, it’s just like in Kinshasa—even in other African countries, too.

Morgan: How does it feel to be releasing your debut single, in comparison to performing and creating collectively? Have you experienced creative freedom in this capacity before?

Huguette: I have written and performed a lot of my own work over the years, but it was always live. I’ve been very involved in music, but from a cultural and educational perspective, doing accompaniment for theaters, contemporary dance troupes. So this is really quite different. At one point, I felt it was so heavy to work alone, but now I have a collaborator in Abu Recordings. Even then, I still feel this heaviness in doing music for [music’s sake], rather than for a cultural project. Since I [agreed] to release this first single, now I’m forced to keep going [laughs].

Morgan: Could you tell me more about your work as a community organizer?

Huguette: Local kids love to see a woman do what I do! They usually approach me in the streets to look for guidance, because they know that I’m happy to provide it and teach them my ways. I worked five years with a percussion group in Kinshasa—I was badly paid, but I was always present, because it was a way for me to find guidance from others at the time.

With Huguembo Studio, I wanted to turn this informal guidance into a more formal meeting point for young artists. At the beginning, I called it Kunst Von Morgen, which in German means ‘the artists of tomorrow.’ It was sponsored by the Goethe Institute of Kinshasa, and we created a space for young people to learn instruments. Even today, the Goethe Institute still helps us organize some activities, like the Jam Boom sessions that I mentioned earlier.

Morgan: What are your most important values as an artist?

Huguette: I love to work with young people. I love it when they talk about me and Huguembo with a lot of pride and joy [laughs]. Even though neither the kids nor I make much money from this, they like to be next to me and learn the ways. I love what I do. If people respect my work, that’s enough for me as an artist.

Morgan: How do you imagine your career, particularly your solo career, growing from here?

Huguette: I want to release a lot of music, and eventually build a school—a center for music in Kinshasa, and a way of learning and tradition that can be replicated at scale, anywhere. For example, Jam Boom could happen anywhere! We can move around with the concept: What I’m doing at the moment in Palermo, teaching young kids percussion, or what I did in Berlin last week, which was pretty much just a big jam session. I want to share my experience with others through music and jamming.

Something for the future: I’m in the process of collecting all of the traditional African percussion instruments, starting with the Congolese ones. I’m doing this to create a book, to document the great history of percussion in the region. [Then I’d like to] have a digital archive with sound recordings of each instrument, and a detailed oral history. I’m just getting started. 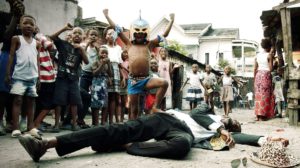