Seeking refuge in Poland, they reflect on family, culture, politics, and living in solidarity from outside their home country

After the shock wears off, and feeds go back to enabling thoughtless routine, those who are geographically far from the conflict in Ukraine are also distanced mentally. Months into Russia’s war, it’s now more important than ever to broadcast the diverse, real experiences of young Ukrainians impacted by the violence in their home country.

With the help of Charlotte Tomaszewska, 10 individuals seeking refuge in Poland share how the war has changed their lives. 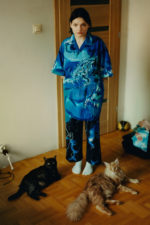 Since 2014, the tension between Russia and Ukraine has felt dangerous, but February 24 is when I really felt it. My friend called me at 5 a.m. and told me, ‘You need to start packing, we’re getting bombed.’ I had to say goodbye to my old life. My friends didn’t know what to do, because their fathers wanted to stay to protect the country. My mother decided to leave right away—she took me, my brother, and my grandmother. We managed to get to Lutsk; my father drove us there. We stayed there for a day, and spent the night in a church. We were hiding in the basement when we heard an air raid alarm. It was us and two other families, none of us could sleep. I turned off my phone because I couldn’t take any more bad news.

The next morning when we left the church, we wanted to have breakfast. Everything was closed, there were no people around. It struck me that my previous life was gone. My father took us to the border and then left for Lviv to help others.

My family and I are going to Great Britain. Right now, I’m transitioning from my old life to a new one. I’m preparing myself mentally to say goodbye to everything I’ve known. Maybe I’ll have more opportunities and ideas abroad. I need to study, learn new things, and evolve. 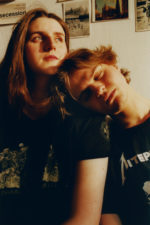 I left home four years ago, but I never wanted to leave. When I moved to Poland for university, I was 16 years old. I was alone, and I hated that I had an accent—people could tell that I wasn’t from Poland. It wasn’t my decision to come here, but I wanted to leave my house on my own, without my parents. I wanted to move out and start my adult life, away from parental control. It didn’t matter where I went to find this freedom. It turned out to be Warsaw. I’ve actually set up my life here quite well. My work is here, my university, my friends. Right now, it feels like a second home. I’m really scared to leave now. I hold on to Poland.

Is there anything you’d like to say to the people of Poland?

I feel enormous support from Poland. I was supposed to leave on the 23rd of February to renew my Polish visa, but I didn’t make the train. The next day, war broke out. My phone didn’t stop ringing—everyone I know from here was making sure that I was okay, that I was still here. It’s been that way since February. Everyone wants to know if I’m alright, or if I need anything, or how my parents are doing. People have offered an empty room so that I can bring my mother here.

I woke up and read a message from my mother that Kyiv was getting bombed. It’s the most important morning of my life. My life is now split in two—my life before the war, and everything that happens after. I’ve had to question myself and find new answers. It’s helped me understand who I am, what I want, and it gave me a new way of thinking about what I should be creating. Before the war, I had a lot of energy to make things, but I wasn’t sure what my message should be. I have a very strong sense of purpose now. I feel obliged to talk about the war; I have no right to talk about anything else. I need to help my country and fight in the best way I can—as an artist, as a volunteer, as whatever I can become. 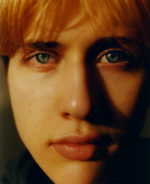 I moved to Warsaw six years ago to study. Four years later, I moved back to Ukraine. On March 3, I came back to Warsaw because of the war.

When I returned to Kyiv, it felt like I was discovering it for the very first time. Kyiv is my favorite city in the world. The spirit, the unity is incredible. There’s still a political divide because the older generation can be more conservative, but when it comes to people my age, people in their twenties and thirties, it’s such a different environment. You can really tell that people are interested in you, and you are interested in them.

What do you miss most about Ukraine?

I worked at a coffee shop called Kasztan. It’s a place where creative people can meet and catch up over a coffee, or discuss a new concept for their work. We’ve had a bunch of photography exhibitions and book fairs in the shop. They just reopened a few weeks ago—I think it’s so important, what they’re doing. They offer some sense of normality and comfort for people. It’s heartwarming seeing all the friends that I have in Kyiv go to the coffee shop and send me pictures, saying We wish you were here. It’s a sanctuary. It’s somewhere you can feel safe and understood. It’s one of the most important places in Kyiv for me.

A few hours before we left, I remember walking around my apartment and not knowing what to pack—my entire life was still there. Everything I had built over two years, all the connections… Half of my suitcase wasn’t even clothes, it was letters that I got from friends, little gifts, books. I packed essentials: a few t-shirts, hoodies, a jacket. Everything else was memories. 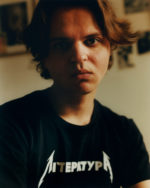 My mother and my two sisters are here in Warsaw. They had been living at my place for two weeks. I finally managed to find them a flat, which was really, really hard and expensive. My father is back in Ukraine, but he’s at the age where he can cross the border. We are all from the Lviv region, so we’re relatively safe. He needs to stay there to look after the house and the pets, and to volunteer for the country. He’s transporting goods with his car, and taking people from place to place. He’s a former businessman—right now, there isn’t the possibility to do business. 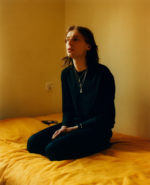 What do you miss most about Ukraine?

Where is your family now?

They are in Ukraine. My sister is here with me in Warsaw. I have a mother figure here who’s my biggest love and support. She’s a talented musician, an old hippie. She always tells me, ‘Taras, what are you gonna do in Ukraine? Go and see the world! You can always come back, your home will be here. But now—move forward.’ 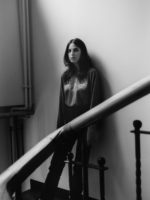 My mother is in Crimea, and I have other family in the Odessa region. I don’t have any family here in Poland. They’re safe, but within hours, everything could change. All of my friends from Ukraine watch the news constantly. You can’t retreat mentally and turn off your phone. You can’t take a bath in the tub and close your eyes. It’s impossible.

Is there anything you’d like to say to the people of Poland?

I want to say thanks to all of Poland. There hasn’t been any division or arguments about the support. I hope that this country will become more united as a result—it’s very polarized. Ukraine was too, before 2014. The past eight years made us reconnect. There’s more solidarity and less division. I don’t care if someone is right-wing or left-wing now. Everyone helps and does the best they can. I don’t want to judge if someone is doing more or less—I’m just happy to live here. Other countries are ‘praying for peace’ and that’s it. The further you are from it, the less you care. I’m happy to be here among such solidarity. I hope it will bring better times for Poland, too. 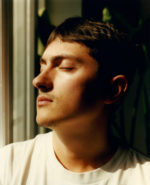 Men under 60 years old aren’t allowed to leave Ukraine now. Even if my father could leave, he wouldn’t. They would only let you go if you had a big family with little children, or had disabilities. The customs officials at the border decide whether or not you can leave. I remember when it all started—people wanted to leave and save themselves. I’ve heard of people hiding in boxes. Everyone has a very real decision to make. Online, I’ve read a lot of negative comments about leaving. Traitors! Why are they running away? Who will defend our country? People had no problem making such statements, even though they knew it was only women and children leaving. It made me think at first, but soon I realized it was crazy to think like that. We all have to decide what is right for us. Still, I felt guilty and depressed during the first days of the war. I felt wrong being safe in Warsaw, while my friends and relatives weren’t. Writing to them was difficult. This guilt and confusion is still with me. I try to help as much as I can as a volunteer. 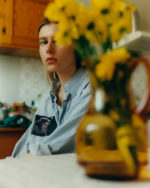 Is there anything you’d like to say to the people of Russia?

I’ve talked a lot to all the Russian people I know. I would tell them, ‘Learn the history.’ If I could, I would end all this propaganda so we wouldn’t be bothered ever again. Where Russification exists, war follows. They force us to speak Russian so that later, they can claim a reason to reach for our land. This is why it’s so important to learn our mother tongue. When I was young, I remember speaking Ukrainian was never easy. They would shut down the classes where this language existed. Under the USSR regime, Ukrainian artists could not create. Poets could not write. People were getting killed. Russia is imperialist. 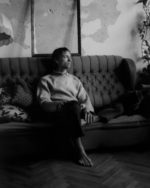 My family is still in Ukraine. Today, I spoke with my mother and my grandmother. They say it’s bad there, but it’s become normal. One moment they see troops walking down the street, the next, they’re preparing the field to plant potatoes. They work while men make sure they’re safe, sometimes with guns in their hands. That’s the new reality: Someone takes care of the potatoes, someone makes sure it’s safe.

If you could talk to Putin, what would you say?

What makes a person a human being? When I think of Putin, it seems like there’s no human being inside. I would want to tell him, ‘It’s in your power to change things,’ but it’s too late. I have no bad thoughts for him, there’s simply nothing. It’s a shame for us all. I hope there’s a bigger reason for all of this. In my opinion, if I give in to hatred, I lose. 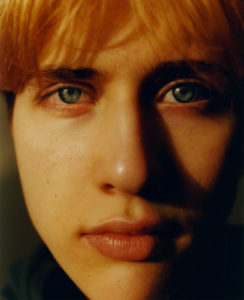 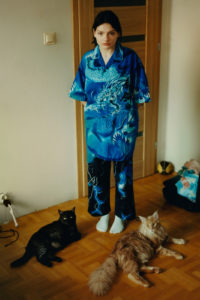 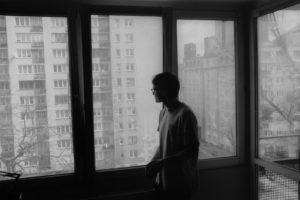 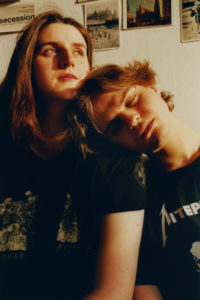 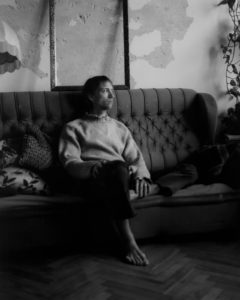 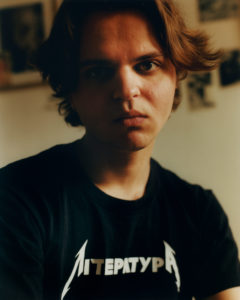 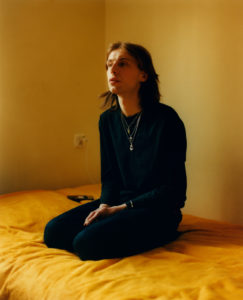 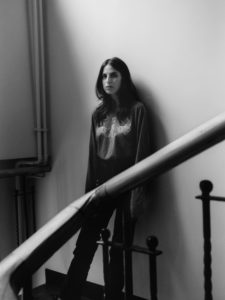 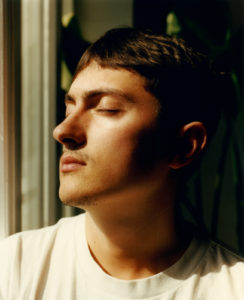 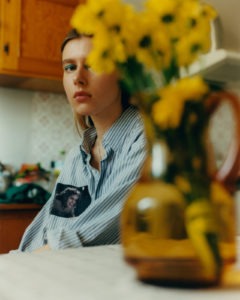