The artist spoke with Document about her latest single, ‘Hot Crush Lover,’ a complicated relationship with pop, and connecting with fans during COVID

Long gone are the days of Blu DeTiger slinking around her native New York City convincing club bouncers that, at then only 17 years old, she was in fact qualified to act as disc jockey. She won them over, just as she did the club-goers, with her signature bass guitar improvisations rousing her sets. Since then, she’s released an EP, gained a following on TikTok, played live where pandemic restrictions allowed, and of course, written new music.

Blu’s unflinching disco style evolved after years of playing the bass, an ongoing practice since she was seven years old. Fueled by pre-teen angst in her formative years, she rejected pop radio, opting instead for music from the ’70s and ’80s, listening to classic rock from the Rolling Stones and the Beatles. She moved through bands for a while, playing where she could and developing her sense of stage presence. Performing with a group, however, was a different kind of expression from what she created on her own. “In my heart, I knew that I actually wanted to play my own music.” Blu found her way to pop around 18, realizing it was the best outlet for expressing her universal desire to be understood.

Now 24 years old, a year after releasing her first EP, How Did We Get Here?, Blu reflects on her creative process. Like most musicians in the throes of the pandemic, she was forced to write from home. Luckily, Blu was quarantined with her brother Rex, who serves as producer on many of her songs, and before that, played alongside her in rhythm sections of different bands. Now an indispensable part of her writing process, that collaboration offered a closeness many artists working through the pandemic were not afforded. “It’s just nice to have someone who knows you really well,” she says. 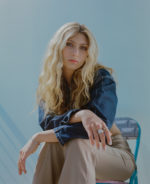 The EP’s first single, “Figure It Out,” was a loose response to the whirlwind changes 2020 presented, and the genesis for the rest of the EP. Along with “Vintage,” the second single, it was written about a year before How Did We Get Here? came out. As Blu reflects, both tracks became the foundation on which she wrote and produced the rest of the record.

In “Figure It Out,” a steady bass beat gets interrupted by synthy, bubbly riffs and contemplations on partnership: “There’s so much more to the fame / But I’m never changing / You’re getting too loud, we’ll figure it out.” She sings about wanting a place for herself, and in the same breath, manages to carve one out. Blu speaks to an age marked by adaptation—we might not be sure of what we need, but we know what we don’t want.

“Vintage” opens with a nostalgia-inducing rhythm section. The lyrics are sung between a feathery head voice and a chesty boldness, almost as if Blu is casting a spell: “He knows all the words to ‘Mr. Brightside’ / He says it’s a joke but I know it’s honest / We’re so ironic, it’s iconic, I get off on it.” Blu speaks to the performative side of relationships, one that’s intoxicating when you’re in it, and altogether sobering after the moment passes. Her direct, deeply evocative feelings are so familiar they’re gutting, but so informal that the music quickly entrances you again.

When COVID made it impossible for artists to connect in-person with their fans, Blu took to TikTok, posting groovy covers of well-known songs that almost immediately took off. It’s a different sort of performance, but as Blu points out, “You’re still performing for the camera.” The platform offered structure to days devoid of routine, when time slipped through fingers and seemed to hardly exist at all. “It did replace gigs, and when you don’t perform for a while and you’re a natural performer, that’s what gives you the most joy. It can be really, really hard for that to just be taken away.” The outlet was therapeutic, offering connection with other people. And for Blu, that paid off—her fanbase has grown exponentially, and her first shows post-pandemic sold out.

Blu isn’t the kind of artist to be shut-in. Her boldness is a side of herself she’s not afraid to tap into—a side that got the attention of Jack Antonoff when, over Instagram DMs, he asked her to participate in his benefit, The Ally Coalition. Later in January, when two Bleachers members had to drop out of the band’s SNL performance because of exposure to the COVID virus, Blu was asked to stand in. A long admirer of Antonoff, her performance with Bleachers was a full circle moment—the kind of validation that keeps an artist going. If there’s one quality she and Antonoff share, it’s the belief that music should be communal and as far-reaching as possible. Blu reflects, “He’s really generous with opportunities, and I really respect that about him.” 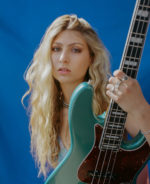 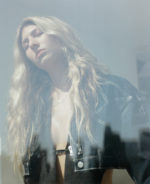 On the making of her new album, Blu describes how she doesn’t always go into sessions ready with an idea, but seems to have some jazz-rooted instinct for feeling, and then expressing. For those who don’t, making music can seem impossibly enigmatic, and hearing from Blu won’t exactly demystify that process. “These days, for the new album, I just start by jamming with the people who are in the room. You need to know how to go with the flow and essentially improvise.” From listening to jazz growing up, and then improvising over DJ sets in clubs, her knack for freestyling is intrinsic.

Blu might not be in control of how the music comes to her, but she’s in charge of how she expresses it. Last year, she played her first shows out of quarantine—no longer a one-woman act, dripping in borrowed Gucci, and really planning to put on a show. “I had only been a side person before, and this was the first time I was fronting and singing and playing and doing the show how I wanted to do it.”

Her newest single, “Hot Crush Lover,” out today, has the same pumped-up feeling—maybe even more energized. She belongs to a generation that gets high on the hope of love, coming down on the realization that the idea is a fleeting one: “I’m sick of all the same shit / It’s making me numb / Don’t you want a cool bitch giving you some?”

Like the best disco and pop, Blu’s instrumentation keeps you coming back for more, partying away the loneliness in the lyrics. Her heart beats in her bass lines, and we all can dig it. 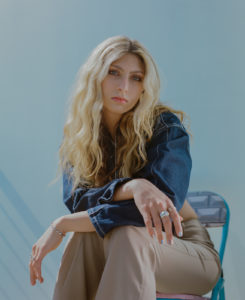 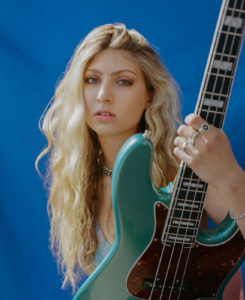 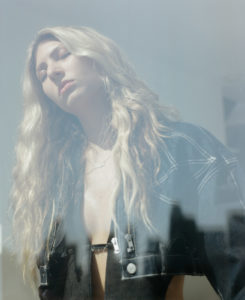 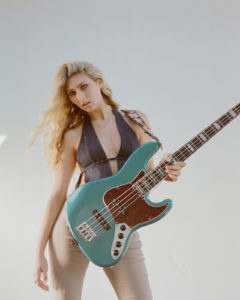