A new exhibition at the Boca Raton Museum of Art is a slice of film history, displaying 22 sets from iconic movies

“This show is about the joy of reliving something you grew up with, that you always thought was real,” says Thomas A. Walsh, co-curator of Art of the Hollywood Backdrop: Cinema’s Creative Legacy. “It’s about getting as close to that magical moment in time as you can.”

Alongside Karen L. Maness, Walsh has gathered a collection of 22 scenic backdrops created for movies produced between 1938 and 1968. On display at the Boca Raton Museum of Art, the exhibition celebrates a nearly-forgotten creative genre, considering that many of the designers behind the sets remain unidentified. Says Irvin Lippman, executive director of the museum, “It is miraculous that these historic monumental paintings were not lost forever, as so many Hollywood treasures have disappeared.”

The backdrops are wide-ranging in subject and size: There’s the 91-foot Mount Rushmore displayed in Hitchcock’s North by Northwest; the hallway illusion that set the stage for the Singin’ in the Rain’s “Make ’em Laugh” number; the Roman vista originally painted for Ben-Hur, which was repurposed in 2016 for the comedy Hail, Caesar! The works are artistic feats, all requiring a versatility not typically required in the world of painting. “The deadlines and physicality required speed and confidence,” explains Walsh. “The canvas was attacked with wild abandon, not courted. [The artists’] unique industrial techniques permitted them to be Norman Rockwell at one moment, and then Turner, Rembrandt, or Vermeer at another.

In turn, what’s on display in Boca Raton is part of a rare and quite singular genre of art: By necessity, it falls somewhere between impressionism and hyper-realism—designed not for the human eye, but for the camera itself. “[The backdrop] snaps together as photo-realistic when viewed from a distance,” a statement from the museum reveals. “When visitors to the Museum take selfies with their phone cameras, the resulting image will look very different from what they see in person in the gallery.” 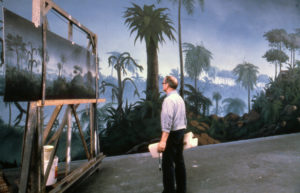 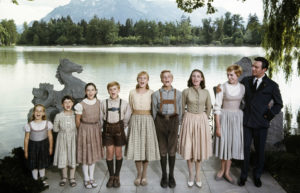 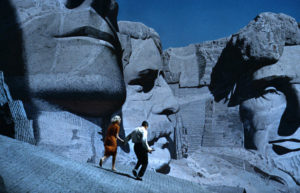