The quintessentially LA story of the man behind the ‘the world’s biggest garage sale,’ and his fight to keep it going

Downtown Los Angeles in the ’60s: A young Nick Metropolis sits in his MG with a German shepherd in the passenger seat. He’s shining shoes for a nickel outside of the Biltmore Hotel across the street from Pershing Sq., an iconic LA landmark where people gathered to protest the Vietnam War.

After following his high school sweetheart from Rochester, New York, Nick quickly learned that she had already gone back east. “We must’ve passed each other on Route 66,” he says. By then he was already in love with California, the movement, the energy,” he says. “When I moved to LA, it was all Bob Dylan, The Beatles, and war protests. I wanted to perform and write songs with that flavor.”

Today, Nick owns and runs Nick Metropolis Collectibles, a landmark of Los Angeles’s West Adams neighborhood that’s more museum than antique store. While you wouldn’t know it by looking at the man or the building façade, both Nick and his store are filled with that impossibly spiritual energy he came to LA looking for all those years back. It’s intangible and magnetic: a zany personality under the influence of a “colorful life experience,” as he calls it.

While his own music career as a George Harrison lookalike wasn’t exactly the anti-war flavor he was looking for, Nick found himself living an old school Hollywood experience that most people only see in movies. Working the set of Shindig!, a musical variety show in the ’60s, Nick bumped shoulders with the likes of Sonny & Cher, Lucille Ball, The Kinks, and The Rolling Stones, to name a few. However, Nick says it wasn’t ever about the partying as much as it was about the soul-searching and, at the end of the ’70s, Nick began to realize that making it in Hollywood was less about the character and passion that he had so much of, and more about control and appearance. 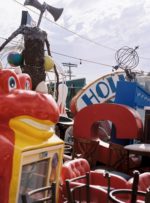 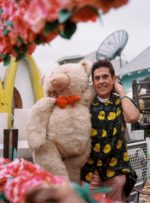 Eventually, Nick turned to collecting antiques and selling them on street corners. What started off as a hobby soon became “the world’s biggest garage sale,” as the Hollywood tour bus would announce as it passed. But after multiple run-ins with the cops, Nick decided to make his operation legit. When a space on the corner of La Brea and 1st in Downtown LA opened up in the early ’90s, the Nick Metropolis Collectibles that we know today was born. Giant clowns, old-school movie theater marquees, gumball machines, neon signs, vintage movie posters, a giant pencil—Nick’s new venture was as colorful as he was. His treasures weren’t just merchandise, they were an extension of his vibrant character. But while Nick Metropolis Collectibles was positioned next to a strip of trendy stores that brought in a gaggle of celebrities and artists alike, it wasn’t all glitter and gold.

“In the first week on La Brea, big old American cars would pull up with kids in the back seat,” says Nick. “They would open up the trunk and there would be a microwave, which I don’t sell, but I bought it anyway. It was a rude awakening of how many people are out there having to sell things just to live in their cars, get gas, or to go to a motel.”

Once the La Brea location had been set up and opened for business, Nick offered up the space itself to help those in need. Twenty feet behind his desk, Nick was feeding houseless veterans. Twenty feet in front of his desk, he was chatting it up with celebrities like Miley Cyrus, Rick Ross, Jimmy Kimmel, and Lana Del Ray. In the span of 40 feet, Nick unknowingly illuminated something in his collectible store that academics have tried to articulate their entire lives: the intersection of the glamor and the reality of LA, something that, although the city has changed throughout the decades, remains pronounced.

After 25 years at La Brea, the landlord, a Rabbi who would lend Nick rent money as long as he paid it back before the Sabbath, passed away. The new management was not as kind. The rent quadrupled to $24,000 a month and soon Nick was hundreds of thousands of dollars behind in payments. When the landlord took him to court, a payment plan evolved, but if he failed to make his weekly payments, he would be out on the street the next day.

Enter Joanna Freidman, a local filmmaker who started documenting the fight to save the LaBrea corner from eviction. “Every day of my life I felt like I was in a [Tas] Salini movie,” says Nick, “She would be filming me on the phone like, ‘I need $6,000 today and $10,000 tomorrow,’” says Nick. But Joanna quickly figured out that there was a bigger story at play, the heart of which is simply Nick’s ability to connect to anyone who walks into his store and inspire them. “Take whatever gift God has given you, whether it’s acting or auto mechanics, and make it big,” he tells people. “The docuseries, ‘Metropolis!,’ is about the stories I heard in the alley and from the celebs that liked us. It’s very heartwarming stuff in a creative, zany way. But the message comes through: It’s all about kindness and love and paying it forward.”

While the news stations came and the GoFundMe contributions helped, it wasn’t enough to pay back the management. It took a week and a half of truck after truck to clear out La Brea, and most of it ended in the dump. The last scene of Joanna’s documentary depicts Nick in a newly emptied lot, sitting on a chair, and holding one of his beloved birds. “The lot looked terrible,” Nick recalled. “It looked so lonely. When Joanna asked me to talk to the corner, I burst into tears. My life flashed before my eyes. I just started thanking the corner for many glorious years, the heartache and joy. I met thousands of people. Thousands.” 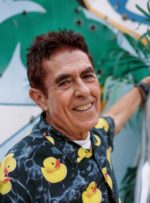 “Take whatever gift God has given you, whether it’s acting or auto mechanics, and make it big.”

Despite being kicked out of his community, one thing that Nick Metropolis never lost was his gratitude, and that wondrous feeling that things happen for a reason. While he won’t say that he’s religious, he will say that he’s grateful, and while he does use the word ‘God,’ he believes it’s interchangeable with “the universe.” As part of this spiritual practice, Nick highlights the motto “In God We Trust” on dollar bills. While sifting through an extra-large stack of bills (he was feeling prosperous), Nick came across a bill stamped with, “Cast your burdens on the lord and he will sustain you. Psalm 55:22,” a verse that he had just paraphrased to a worried friend just moments before. It’s moments like these that show Nick that God speaks to all of us through material signs, like, as he explains, “a penny on the ground, or a page you flip to in a book.”

A month before La Brea shut its doors, Nick began looking for a new building, but all the locations he set his eyes on all seemed to be destined for a holier purpose. Before he could put down a deposit, they were set aside to be foster homes and special needs schools. One day, Nick was driving through West Adams and noticed a “for lease” sign on an old church. A couple days later, he was signing a lease.

“The day that I got the keys to the store I bought a bottle of wine to sit at the altar of the church and celebrate. I pulled up to the front of the store and there was trash, like, a foot deep. Broken bottles and Burger King wrappers. On the top of the trash was a five-dollar bill, but it was stamped in red with, ‘Make America Great Again.’”

If you believe in bad omens, you might have taken that as one. Nick, however, a passionate advocate for civil rights and NAACP cardholder since age 14, took it as a reminder of how carefully orchestrated the universe is, and that it’s always listening. The second chapter of Nick Metropolis had begun.

Thirty percent of Nick’s business comes from movie rentals, so the new West Adams location was hit hard by the pandemic. Nick gave up his apartment so he could supplement his rent at the store, but all the while he maintained focus on giving back to a community he noticed was suffering. Nick set up a table outside West Adams to distribute free food, clothes, and home goods. But to Nick, that’s just a little platform. “I want a big platform and I’m not shy about it,” he says. “It’s all about paying it forward. It’s about more than just a food table outside, [it’s about] feeding people all over the world.”

After 33 years of resiliency and faith in the collectible business, Nick’s livelihood is once again being threatened. This time it’s by Triple Link, a developer who is looking to build USC housing on the land Nick’s church currently sits on. The neighborhood is rallying against it, but while Nick is attending every Zoom meeting and doing what he can, he also refuses to worry. “It’s in God’s hands, whatever happens, happens,” he says. “If we have to leave, I don’t know if I can relocate. I’m hoping that, by that time, Joanna’s docuseries will take off.” 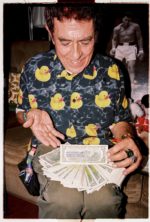 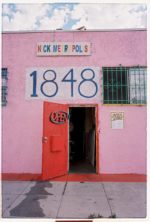 Through it all, Nick continues to run his store on West Adams with the same positive energy he’s carried throughout his entire life. He’s also started giving out souvenirs. On his two-dollar bills, Nick writes, “Kindness and love, pay it forward—Nick.” He gives them to people he feels a connection with, proudly remarking, “People get the best feeling from it, they tell me they’re going to look at it all the time or put it in their fridge.”

Even if he does lose the building, Nick has tentative plans to take his collectibles to the road in a van. Going forward, though, his real focus is on the docuseries, which he hopes to take off and become that “big platform” that he’s always wanted. No matter what shape Nick’s life takes, what can never be lost is his unwavering belief that he is on this earth to do more than just curate LA’s most epic collection of treasures, but spread that message of love and kindness.

While you can, make a point to visit Nick Metropolis Collectibles on West Adams. You’re likely to be greeted with a wide smile and, as you walk in between clowns and birdcages, find yourself in a deeper conversation than you expected. Chances are, you’ll spend more time there than you thought you would, and you’ll leave feeling like you, too, are on earth for a reason much bigger than whatever you do just to get by. You might find yourself—as corny as it sounds—believing in yourself, in random encounters in a store you happened into, and in helping others. In kindness, in love, and in paying it all forward. If you’re really lucky, you’ll be leaving with one of those two-dollar bills. 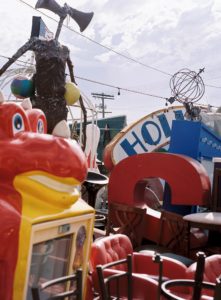 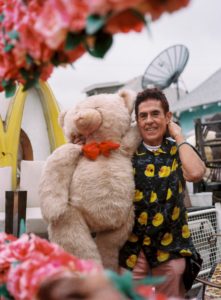 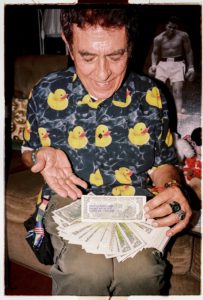 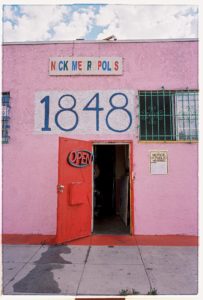 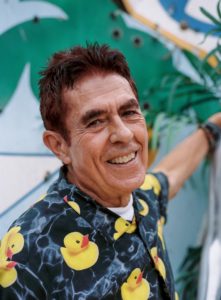