The artist's latest show, ‘Monotony in a hurry,’ features portraits of modern media's most ubiquitous faces

“Everything is composed of everything—in the small as in the big,” says Thomas Bayrle. “Everything can be modulated from everything, like in some kind of rubber world.”

It’s a statement that captures the essence of the German artist’s superforms—his hallmark portraits, made up of repeated distortions of smaller images. Kim Kardashian’s face is constructed of thousands of iPhones; Stalin’s is made of mustaches; the Virgin Mary and Jesus appear from layers and layers of tiny crosses. These are statements on the modern norm of visual oversaturation, especially as it pertains to the faces of the famous and infamous of a given time.

Bayrle, raised in post-war Berlin, once said that he lived “the contradictions of the time.” He started as a weaver in a factory, then moved to graphic design, then co-ran a publishing house that specialized in artists’ books before committing fully to the creation of art. “During the day, I would work for Ferrero, Benckiser, Pierre Cardin, and McCann Erickson, the German factories and the American agencies,” Bayrle said in a 2018 interview, “and at night I worked for the Marxists and the anarchists, the students, the Italian protest paper Lotta Continua, and the German extra-parliamentary left.”

The product of such conflict was the ability to “experience something more complete and complex”—Bayrle gained a fuller understanding of society around him, and the means of expressing the inherent qualities of mass culture, mass production, capitalism, authoritarianism, digitization, and urban living. “There are stages in the complexity of this life,” says the artist, ever in tune with the formal shifts around him. “It is not that everything always hardens in one direction. There are movements and counter- movements that work into each other.”

Morgan Becker: What’s the significance behind your show’s title, Monotony in a Hurry?

Thomas Bayrle: ‘Monotony in a hurry’ is an interesting contradiction. With the stretchability of time—which is very subjective—a second can be like a year and vice versa. This feeling is very important for art: that the normal grids of movement are dissolved, and change according to the physical and mental situation you are in. 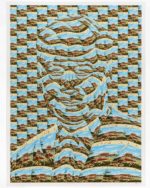 Morgan: Can you tell me about the physical process of creating a superform? How did the method develop and change over the course of your practice?

Thomas: In the mid-1960s, I tried to approach this idea through painting. A little later, I worked with graphic means to lay out grids with shapes in such a way that they would adapt to a superform. In the beginning, these were drawings that were assembled into montages and then realized using screen printing. I used means that best served the need at hand, such as [creating] a stamp for a serial background or an individual drawing.

It was only later that I had latex rubber imported on a roll, onto which I printed, and which in turn was distorted with several hands-on photocopiers. Then came the first personal computers—and I was lucky enough to work with a student who wrote me a new program on the Atari to calculate the desired distortions and use them to further develop my graphics. The distortion option is now implemented in every good graphics program, but a lot of manual work is still required to create a superform.

Morgan: What’s the thought process behind deciding which miniature image will make up the overarching subject of a superform?

Thomas: Early on, I thought in terms of two categories: A superform as a whole, and the in-detail forms that [make it up]. This happened by working on the small components in such a way that they fitted exactly into a large mold. Organic shapes were covered with quadratures so that a face made up of nothing but distorted internal shapes emerged, into which I could then work.

Everything is composed of everything—in the small as in the big. Everything can be modulated from everything, like in some kind of rubber world. Into the micro, as in the macro. An organic world in which all surfaces are used for a statement.

Morgan: Repetition plays a vital role in your work—initially, it was a way for you to engage with mass consumerism. Can you tell me about the new significance it’s taken on over time, or its other applications in social commentary on the modern world?

“The forces which I address are causal expressions of our present material and spiritual world.”

Thomas: I constructed the repetition as an organic sea of ​​millions of sub-forms—as an organic web. A world is constructed from different areas in such a way that no area is left over, no form is too much or too little. I’ve broken organic shapes into organic faces. Small sub-parts of another genesis were then filled into these areas, so that a new network was created in terms of content. I see repetition as creativity on a mass scale. It is not monotonous and boring, but a sea of millions of uniquenesses.

Morgan: What’s the function or reason behind showing your superforms as wallpapers or floor coverings—as you’ve often done in gallery spaces?

Thomas: I see my works as skins that permeate the environment in which I live, walk, and stand. By covering such large areas, a new world is created. The repetition shows that nothing exists twice in nature.

Morgan: What’s the reason to make a piece in bright color or in black-and-white?

Thomas: I see the execution quite subjectively—where color and shapes are set in different relations to each other.

Morgan: You’ve done portraits of many pop culture and political figures, from Kim Kardashian to Xi Jinping. What are the qualities of an individual you might choose to represent in your artwork? 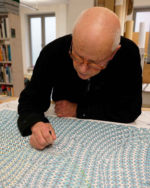 Thomas: These figures, who appear a million times in all media, are archetypes that structure our world mentally and physically as a network of nets.

If I construct Stalin from his mustache, then I formulate one of many characteristics that can be associated with this man in his time. These are archetypes of mass society. Whether made of buttons, beards, or smartphones, they are expressions of our mass society and mass production. I try to find archetypical modules that distinguish a face in this society.

Morgan: It seems like you’re grappling with many different themes—the political, the sexual, digitization, mass production, transportation, and urban living. Yet you address them all with this one, very provocative technique.

Do you think that your artistic method can be applied to many or most of the issues that exist in contemporary society? Is there some force that connects them all?

Thomas: Yes. I think it can be applied to various issues in our society, just because it is a method of declination of masses—like a cake dough that is constantly reshaped. The forces which I address are causal expressions of our present material and spiritual world.

Morgan: What was your introduction to pop art and art in general?

Thomas: I came to pop art through the important American artists of the ’60s. A German artist who inspired me very much was Peter Roehr, with whom I was friends. I wanted to be a textile engineer and had no intention of being a visual artist. That was around 1960, but in the middle of a hall of hundreds of looms, the penny dropped for me: ‘This madness must have something to do with art.’

Morgan: Some have suggested that you ‘foresaw our digital reality,’ representing its visual traits before they actually came into existence. Is that true? Do you have any predictions for the future? 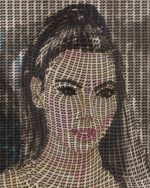 Thomas: This is connected with the automatic weaving machines, in front of which I stood for over a year in a large textile factory. The organic connection of bodies and machines did not dissolve there, but was merged in my imagination and in my feeling and brought into artistic form. Quite independently of the punch card machines in the mill, I realized that weaving and programming are causally connected. There are stages in the complexity of this life. It is not that everything always hardens in one direction. There are movements and counter-movements that work into each other.

Morgan: It seems that a lot of your work is built around observation, on a grand scale, of the world around you. Where do you gather your observations from?

Morgan: Is there anything you think people frequently misunderstand about your work?

Morgan: If you began your practice anew today, as a young man, how do you imagine it’d be similar or different to your existing body of work?

Thomas: That’s a good idea. Today, I would definitely no longer strive for such a hard apprenticeship. However, I think [my work] is good afterwards.

Thomas Bayrle’s Monotony in a Hurry is on view at Gladstone Gallery’s 21st Street location, through April 23. 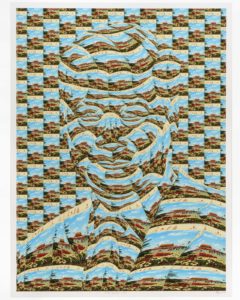 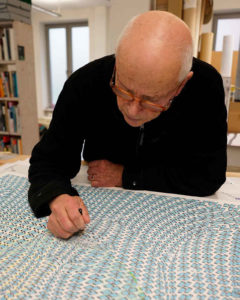 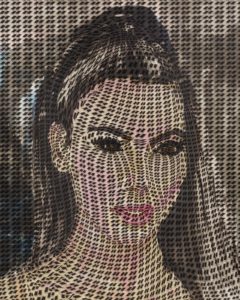