The Guyana that Suchitra Mattai channels in her practice is a mysterious and mystical place, as bewildering as it is familiar. Mattai’s Guyana is partially informed by her childhood memories, from before leaving for Canada at age three, but primarily exists in her imagination. It is the amalgamation of stories passed down to her from her parents and grandparents: real and fictional narratives that she pieces together through the exploration of old polaroids of her family and friends. The stories are brought to light through her usage of found objects and unique fabrics in her artistic practice.

Having spent much of her time after leaving Guyana moving through various locations in the US and Canada, Mattai feels that the country is also the only place that she can truly call home. Her recent exhibition at Hollis Taggart, Herself as Another, is an exploration of her complex and nuanced identity as an Indo-Guyanese American who has, at times, felt alienated and othered in the highly white-dominated spaces she has occupied during her time in North America.

Essential to grasping Mattai’s work is the understanding that it is built on the foundation of her longing to understand her identity, and have it be rooted in the idea of a space or homeland where she does not feel othered. Mattai’s home country has many idiosyncrasies that make it unique. Not to be confused with Ghana, Guyana is the only English-speaking nation in South America. Perhaps because of this, its culture is more closely associated with the Caribbean than with the Spanish-speaking countries that characterize the continent. Possessing a rich colonial history, Guyana is made up of many racial groups: Indian, Afro-Guyanese, Portuguese, Chinese, Indigenous American. In a lot of ways, it is a melting pot of all these cultures—many of which were imported to the country by their British colonial overlords to cultivate the region’s many natural resources. Mattai’s great-great-grandparents on one side, and great-grandparents on the other side, arrived in Guyana as indentured laborers. In trying to make sense of her own identity, it has been necessary for the artist to explore this dark history, which was not discussed in her family.

“In a simple way, it’s about finding home,” says Mattai. “We all want to have a home. I’ve moved so many times and lived in so many strange places, and there’s something about this lack of a singular home that is interesting to me. When you are in that place, you start researching your past; you start researching your people. I identify very much with being Indian and South Asian. But ultimately, my great-grandparents were indentured laborers. When you start researching, you see that there’s a huge gap in finding information about this, in a similar way that there are gaps in finding information about other types of bondage. It’s that gap that I’m interested in. I want to know what filled this gap, and how. Everybody should know about these gaps in Western history.” 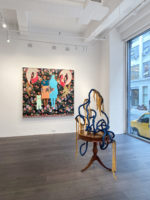 Left: Herself as Another, 2022. Right: Fitting In, 2022. Courtesy of the artist and Hollis Taggart Gallery.

Herself as Another is an extension of one of Mattai’s earlier shows, held at Unit London, which explored the archetype of the monster—tracking how being othered within a community often parallels the way we perceive the monster or monstress in folklore of the time. In our society, the archetype of the monster exists in the collective imagination and usually reflects the anxieties of a culture or a community. “With these two exhibitions, I wanted to draw attention to how we monster these others, in the hope that they can create a space for disrupting those ideas—asking people to find their own monsters, so that they can ultimately have more empathy for other people,” says Mattai. In exploring this topic, the artist specifically draws connections to how brown people, immigrants, and people with various illnesses are othered and effectively turned into “monsters” in the communities that they inhabit.

In Herself as Another, we see a deepening in Mattai’s investment in storytelling, craft, color, and material. The exhibition is composed of mixed media works, collages, and tapestries, all encoded with a unique assortment of the personal objects, fabrics, memories, and histories that formulate the artist’s understanding of her identity.

Mattai’s piece entitled Shadow of a Woman with Vajra (Divine Weapon) (2022) harkens back to the Vedas, the oldest and most sacred Hindu text. The vajra is the weapon of Indra, the most powerful male god in the Vedas. By putting the vajra in a woman’s hand, Mattai is giving the piece’s central figure the power to overcome her “shadow self.” For Mattai, the shadow represents our darker side, or inner demons. Throughout her oeuvre, the artist has continually returned to the archetype of the shadow, and has a series of works that explore women and their shadow sides. Mattai also connects the idea of the shadow—or, more specifically, living in the shadow—to the experiences of immigrants or people we other in mainstream society.

In Fitting In (2022), Mattai builds on her background in working with found objects. In this piece, blue plumbing material is drilled into a very European antique side table, becoming a disruption in the process. The antique table is invaded by the objects that Mattai builds around it, including trimming and fiber elements reminiscent of Carnival. “These elements placed together sort of become a metaphor for fitting in.” says Mattai. “You are that blue object, or you feel like that blue object. I was thinking about this idea of trying to remain in the shadows, to not draw attention to yourself, but being unable to do that because of your skin color and cultural background.”

There are many ways that we remember a place and a people. A lot of Guyanese history is recorded through oral tales that are passed down from generation to generation. The written stories of Guyanese people are very slim. Understanding this, Mattai’s practice aims to highlight intimate narratives to give voice to people who did not have the ability to be a part of written history. Her practice translates these oral histories—oftentimes personal and connected to her own family—into a more permanent archive that stands the test of time and will be accessible to generations to come.

Responding to the limitations of the “official archive” promoted in popular versions of history, Mattai attempts to tell the stories of Guyanese people by utilizing a form of critical fabulation—a process coined by Saidiya Hartman, which attempts to reconstruct lost narratives through storytelling and speculative narration. In effect, Mattai tells what can be considered an “impossible story,” using her creativity and imagination as placeholders to fill the gaps of information on people outside of the dominant narrative of canonical history. One way she does this is by incorporating crocheting, weaving, and sewing of fabrics into her work—techniques she learned from her grandmothers as a young kid in Guyana. Mattai’s work often uses techniques associated with the domestic sphere, making visible narratives around the labor and the creative output of a generation of craftspeople and artisans often relegated to the shadows.

Mattai is the oldest of three children, with siblings that are eight and 15 years younger than she is. As a result, when she was a child, her grandmothers were some of her closest friends—one of them professionally sewed wedding dresses, and the other only wore dresses that she made herself. One of Mattai’s earliest memories was at eight years old, crocheting a blanket for her newborn sister. As far back as she can remember, she has always wanted to be a fine artist, but it was years before she incorporated her grandmothers’ techniques into her practice. She had tried during graduate school, but at the time, felt her peers and professors met the methods with a certain skepticism. It took years for Mattai to realize that, to create work that authentically reflected her identity, she had to let go of modes of creation that were highly informed by Western views of what constituted good art.

“I decided that I was only going to create things intuitively. This is how my grandmothers and all of my ancestors would make things. I have this overarching thesis of giving voice to untold stories, but when I am creating, it’s purely intuitive. I might find an interesting object which may lead me to a story that I remember, but I’m not limiting myself by process or material to tell that story. The story is the most important part,” states Mattai.

The work that the exhibition derives its name from, Herself as Another (2022), was inspired by a polaroid from the ’70s that Mattai found of herself, her mother, and her aunt. The piece references a very specific story of her aunt passing away due to the effects of lupus. It highlights Mattai’s intense connection to her matrilineal line, and comments on how society others people who are ill. The image of Mattai’s aunt creates a ghostly space, but also captures the essence of the connection and reverence we give to family members that came before us. The work exists as a memorial to Mattai’s late aunt, and as a testament to how memories transcend time and even death.

Mattai’s exhibition is a dynamic and timely meditation on the dangers of living in a society where our differences are shunned rather than celebrated. Her work beckons the viewer to put themselves in the shoes of the other—to see how we are all others, in one way or another. It is a reflection on the power of empathy, and the product of Mattai spending years looking to make sense of her own identity. It is the manifestation of a healing process that has allowed Mattai to tap into her power as a woman, artist, and storyteller.

Herself as Another is on view at Hollis Taggart in Chelsea until March 12. 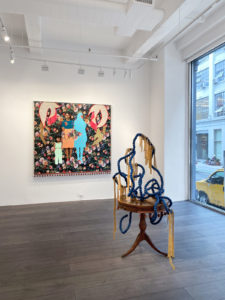 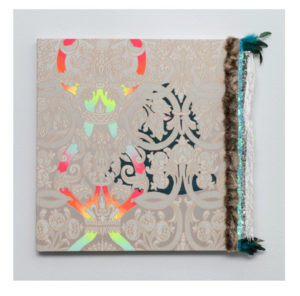