Leering past the sterility of contemporary pop music, Alex Cameron’s beat-heavy ballads on Oxy Music force listeners into rhythmic gyrations (that hopefully resemble dancing) as they ponder the raging opioid crisis. In the midst of what was, for many, an unprecedented period of miserable solitude and ugly self-reflection, a slew of introspective albums littered the musicsphere. Cameron is a notable exception to this trend. While he pivoted into such self-analyses on his most recent pre-pandemic album, Miami Memory, his post-2020 debut saw him returning to the caricature-driven writing of his earlier work.

Perhaps I am a morally deficient feminist, but I found the faux toxic masculinity that Cameron built his platform upon to be sheer genius. The pleasures of his first albums were founded on a saccharine sense of moral superiority over the obvious evils of culture. Cameron was making the joke, and you, the listener, were in on it. His songs take the perspectives of outliers: the hypermasculine table-for-one guy and the internet porn obsessed. Now, he’s drug addled, confused, and desperate for purpose. While the characters who dominate his songs have developed more complexity with each album, what still remains is the Australian crooner’s shrewdness. His lyrics are indecent and irreverent: “I promise when I fall I’ll be graceful / Only room for one / Yeah there’s only room for one in a K Hole.” 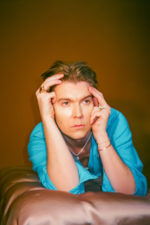 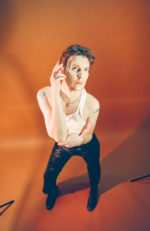 Oxy Music radiates with Cameron’s signature interplay between obtusity and authenticity. “If my music ever becomes, just like, totally fucking sarcastic and meaningless, you’ll know that I’ve turned into an ungrateful prick,” he tells me between puffs from his vape from a plant-ridden room in Los Angeles.

The lyrics on Oxy Music are full of “confessions and lies,” he explains. Cameron sees the function of his work to be a sonic snapshot of history. “There might be a little ego involved in this, and I try to minimize that as much as possible. But I’ve always just thought, ‘I’m trying to create an accurate depiction of what it means to exist.’” The album explores the perspective of a character in the throes of substance abuse, inspired in part by Nico Walker’s novel Cherry, news stories, and real-life individuals Cameron has encountered. He’s drawn to points of cultural contention—large-scale debates in which the public is edged into taking one side or another. But Cameron plays in the mess of gray between black-and-white, seeking the willingly-misunderstanding types who refuse to believe in cultural change that expands beyond the modern kids’ Sophie’s choice: “Just say no and persecute those who say yes,” or, “Hurrah for unregulated drug use.” With Oxy Music’s darker thematics, Cameron masters the balance between satire and sympathy. 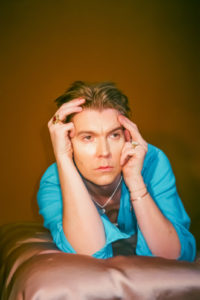 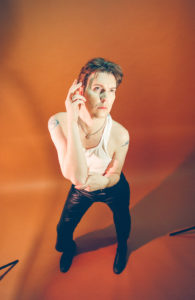