The model, actress, and singer joins Document to discuss the making of her debut album, ‘I Can’t Let Go’

Suki Waterhouse is a singer who is also, by sheer luck, beautiful. Golden fringe bangs frame a face that Jack White has compared to Suzi Quatro’s, with whom she shares a puckish pout. It is a face that does not require makeup, but is often decorated in the epitome of the ever-appealing ‘no-makeup’ makeup style—offset by a smudgy Euro eyeliner to remind you that she is, in fact, cool. But the fortunate good looks that have landed her on the covers of Vogue and Vanity Fair should not be held against her.

Where some let ethereal such beauty carry them through life, Waterhouse has used hers as the legs of exposure by which she ascends virtually every field of creativity. It is the reason her face initially populated news feeds and magazine stands—but since, Waterhouse has gone on to embody an identity as a multihyphenate in the truest form. Her ability to act has landed her alongside filmic powerhouses like Keanu Reeves and Jim Carrey. She’s mastered the rare combination of dominating all outlets of social media while still keeping her private life relatively private. Now, Waterhouse is making what may be the most intimate move of her career. Her first album, I Can’t Let Go, is set to release in late April via Sub Pop Records.

The album is the culmination of years of love and longing and anxieties. A career in music isn’t an afterthought for Waterhouse, it’s a lifelong ambition. She’s ready to prove to the world that she has the chops to make quality music—to develop art that is wholly her own. In anticipation of its release, Waterhouse joins Document to discuss the making of and intentions behind the album.

Megan Hullander: Your life is very public. But it seems, externally at least, you’ve been able to maintain a healthy balance between your public and private life. Is it scary to release music that feels intimate for you?

Suki Waterhouse: It’s been quite important to me to not make myself completely mad by being too public. I think I live a really normal life, aside from walking down the street and somebody taking a picture of me wearing my pajamas. I think I kind of toppled into all this fame. Sometimes it feels overwhelming, trying to figure yourself out in your 20s.

I really wanted to not shy away from the exaggerations of the relationships I’ve been in, or anything like that. I wanted to heighten them and explore them—to do that with sound, as well. It feels like I’m getting to share a lot.

Megan: For most musicians, a lot of the struggle that they face comes with just trying to get exposure for their music. You kind of already have a built-in base of people who are interested in what you’re doing creatively.

Suki: That still doesn’t make it easy, though. Just because you have some Instagram followers or whatever, doesn’t actually mean shit. There’s definitely some help to it—like, you know, being able to get interest from magazines like yourself.

Megan: How do you think your career would have been different if you had started with music and then moved into acting and modeling and whatnot after the fact?

Suki: I’d have been terrified. Most of everything has been about getting the courage to put [the album] out because, of course, it’s all those things that you can agonize about. Will people like it? Will they accept it? Will anyone even listen to it?

“When you release a piece of music, it becomes everyone else’s. I swear, I’m addicted to it: You put it out and there’s strange shit that happens.”

Megan: So, why make an album now?

Suki: I think it has something to do with getting a little bit older, and being able to see a lot of things that happened. Instead of feeling ashamed or embarrassed, you start realizing that you own all of your stories. And just getting a little bit more confident, knowing I’ve been doing this for a long time, and putting in so much work. I owed it to myself to do it. There’s a deep desire to share it. When you release a piece of music, it becomes everyone else’s. I swear, I’m addicted to it: You put it out and there’s strange shit that happens. It really helps to actually process things.

Megan: Is there a point of genesis that you can identify for this album?

Suki: I was writing about the most intense moments through my early 20s. That was when there was a lot of—not just heartbreak, but struggling to fill voids and feeling unsettled and having these intense crushes on people. You know, when everything is just trying to fill something else? You have to navigate how to look after yourself and be human and basically be your own. It’s a lot, and it’s not like your mom’s with you.

Megan: The tracks feel very disparate in terms of sound. What do you feel is the driving sense of cohesion between them?

Suki: The songs are certain feelings about very pivotal moments. If I look back in my mind, they’re things that I can’t touch anymore. Very, very special things. I’ve always loved living in the past, and I love old things around me.

Megan: Performance is sort of inherent to the work you’ve done outside of music, with modeling and acting—how do you think those roles have prepared you to perform your music?

Suki: Nothing really prepared me for that. It feels like a whole different animal. I completely lose myself, and there’s a freedom that comes out when I’m on a stage. There’s no constraint. I don’t know what the fuck happens up there, to be honest. I just started doing it and I want to get better, but I’m hardcore in love with it.

“I’m quite influenced by film and music that transport you, and that’s always what I’m going for: trying to be transported through sound.”

Megan: It seems like, at the moment, making music doesn’t just mean creating an album. There are a lot of aesthetic considerations linked to artistic identity. What did you feel like this album kind of looked like visually?

Suki: I was really influenced by To Die For. There are lines in it where [Nicole Kidman] is talking about something like, “You’re not anybody in America unless you’re on TV.” That was a decade ago, and it still is so prevalent now. There’s a thing at the beginning [of the “Melrose Meltdown” video] where I sort of wanted to be like a To Die For Beverly Hills housewife. I was thinking a lot about the glamorous fantasy that completely envelops you. I was really obsessed with narcissism. And I think working in films has actually impacted the way I wanted the music to sound. I’m quite influenced by film and music that transport you, and that’s always what I’m going for: trying to be transported through sound. 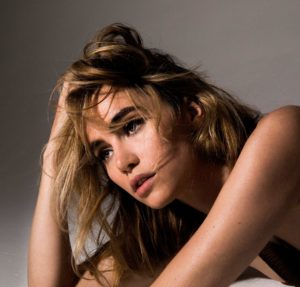 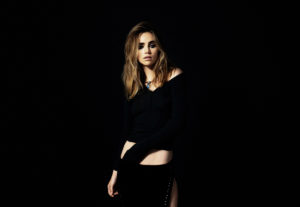