With language and laughter as his tools, the artist creates an idiosyncratic body of work

At the center of Ross Simonini’s solo debut at anonymous gallery is a small ceramic pot containing what looks to be lifeless soil. At first impression, that’s technically accurate—but there’s more to the story. Lean down with an ear toward the ground, and listen: Emitting from the dirt is a chorus of laughter.

The piece, aptly dubbed Laughing soil (2021), acts as a key, unlocking the greater emotional meaning of The All. The occasion also marks Southern California-based Simonin’s first show in New York, where most know him as a writer with bylines in the New York Times, the Paris Review, and Interview, among a slew of other publications.

Surrounding Laughing soil is a series of paintings titled Feel Good. Washed-out pastels and earth tones are the backdrop for throngs of oddly misshapen faces, whose contorted expressions are initially difficult to gauge. Hearing Laughing soil’s audio—which is the sound of Simonini’s laughter in dozens of simultaneously playing recordings, made daily over many months—lends to an understanding of the ebullience reflected across the six canvases and single pillow that make up Feel Good. 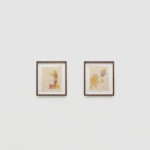 “Obviously, the phrase ‘feel good’ is something we’re all familiar with,” says Simonini. “I liked that people often talk about feel-good films or a feel-good book—you rarely hear about a feel-good painting. I thought it would be fun to think of a painting in that sense.”

While the compositions of Feel Good may seem to have resulted from jubilant, expressionistic freehand, in truth the idiosyncratic shapes therein derive from the physical contours of letters in an original, mantra-like phrase that appears repeatedly throughout The All—albeit one that the artist has not revealed to anyone.

“Every single mark on every single canvas in the show is a letter,” explains Simonini. “When you’re standing in the room, you’re essentially surrounded by thousands of iterations of this same phrase.”

And the faces? “Beings that embody the language,” Simonini says. “I literally made them out of the language, but they are also expressing in their form [that same] feeling”—that is, the uplifting energy he aims to manifest through his exhibition.

“I liked that people often talk about feel-good films or a feel-good book—you rarely hear about a feel-good painting.”

This, too, is why Simononi won’t disclose the phrase: The meditative atmosphere at the heart of his vision seeks to transcend quantifiable, finite elements like language, settling instead on an imagistic plane. And deciphering the text on the paintings is impossible through their pigments and irregular layouts. This creates an intriguing juxtaposition in the show, with overt displays of emotional vulnerability operating by an internal logic that remains a secret to all but the artist.

“If I were to speak that phrase aloud,” he explains, “I would be bringing it back into the conscious space.” In that way, it would puncture the sanctum of feel-good-ness The All embodies.

The exhibition’s closing performance will take place at anonymous gallery on February 19, and will feature Simonini livestreaming from a “natural setting” in Los Angeles with on-site vocal accompaniment from Brian Belott. 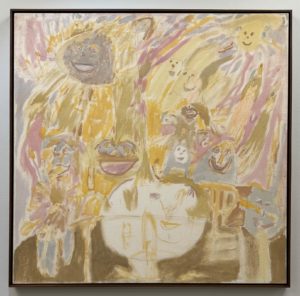 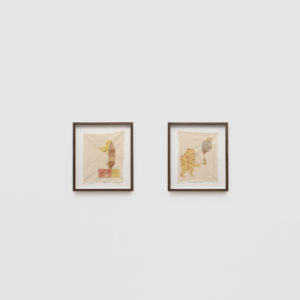