The multihyphenate artist and performer died at 88, leaving behind a collection of trailblazing gay films and photographs

“Art only stimulated by praise or profit is not art,” said James Bidgood. “If it is not born from pain or anguish or pride or shame or desire or overwhelming joy, it is only something of decorative value.” This belief is one that the trailblazing artist lived by and died by—yesterday, at the age of 88. It’s a belief that informed his performance, his photographs, his films, his costume and set design, and one that’s shaped the rare legacy he’ll undoubtedly leave behind.

Bidgood was born in Madison, Wisconsin in 1933, and moved to New York City at the age of 18. He started working as a dressmaker during the day; at night, he did drag at the East Village’s Club 82, assuming the personality of a woman he called ‘Terry Howe,’ and other times, that of the actress Carol Channing. Cross dressing laws put performers at risk of arrest through the ’50s and ’60s, but Bidgood carried on with the rest of his community. The era was memorialized in P.S. Burn This Letter Please, a documentary directed by Michael Seligman and Jennifer Tiexiera, which interviews a handful of drag performers of the time, including Bidgood. “We thought we were doing it for ourselves,” recalls George Roth, also known as Rita George, during the film. “We didn’t realize we were doing it for the next generations.”

James went on to study at Parsons School of Design. He began taking photographs, noted for their campiness pre-Sontag’s “Notes on ‘Camp.’” His portraits are erotic, outrageously staged, and unapologetically gay. They’re obscene, but not technically. (“I usually covered the dangly bits with something like organza or china silk or stretch fabrics,” he said.) They’re dirty and lurid, but in a romantic, tongue-in-cheek kind of way. Bidgood’s models were young men: bathed in colored light and glitter, perched on porch swings and canopy beds and tree branches. He wanted to display his subjects “as opulently and as attentively as those professional ladies appearing in Playboy-type magazines.”

The artist’s masterpiece was Pink Narcissus—an arthouse film that runs a little over an hour, and imagines the fantasies of Bobby Kendall, a gay male sex worker. It was recorded entirely in Bidgood’s New York apartment, over the course of seven years: sans dialogue, heavy in symbolism and innuendo, rich with kitsch. Pink Narcissus was released anonymously, after a dispute between the filmmaker and his editors. It went on to achieve huge underground success, but wasn’t attributed to Bidgood until the turn of the century.

Bidgood never really made money, and it was only recently that he began to receive institutional recognition for his work. His dreamworld lives on—despite that massive injustice—as well as the strength of his conviction: “What is art should never be determined exclusively by those who can afford it. You have to feel art. It demands a physical response.” 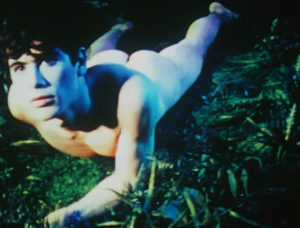 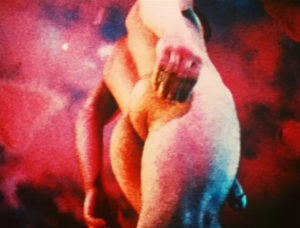 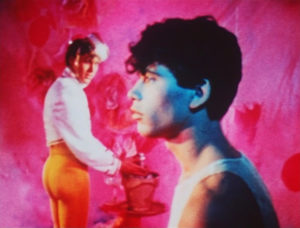