The alienation and fantasy of modern femininity

Safy-Hallan Farah examines the performance of womanhood in the attention economy, with the Real Housewives as case study

We often speak of attention as though there is a certain choreography to it. It’s supposed to move like a liquid, flowing where we direct it. But it’s unfair to say that it’s pure liquid for everyone; for women who have alchemized attention into personal power, its contents seem closer to jello, too sticky to navigate, though this characteristic seems integral to the condition of womanhood.

The so-called Real Housewives, hailing from various metropolises, are a tableau of modern femininity: women of a certain age who, trapped in the structures of family and tradition, endeavor to untangle their alienated, prefigured self-identities in front of a worldwide audience. A housewife is not a literal designation; it refers to a woman who appears to “have it all”—every desirable feature under capitalism, such as riches, beauty, and feminine accoutrements—yet none of it makes her a paragon in the eyes of other women.

There’s a degree of perfectionism intertwined with this public performance of womanhood. The Mormon women of The Real Housewives of Salt Lake City frame their perfectionism as a force that operates from the outside in—God’s perfect image being shone back onto them. In the ADHD lexicon, the word for my own perfectionism is omni-potentiality. Psychologist Thomas E. Brown characterizes omnipotentiality as a “fantasy-based attitude” resulting from the glut of modern choice, causing lifelong maladaptive issues in the areas of school, career, and friendship. It’s associated with limitless creative potential. 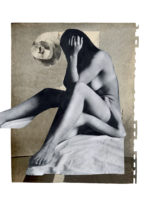 My own periods of limitlessness are marred by the fact that, most of the time, I am barely a functioning adult woman. At various points of the pandemic, I’d lie in bed, swaddled in my blankets, staring at the white walls, thinking to myself that a different color—green or pink, perhaps?—would do more than liven up the space; it might even give my life meaning. And who knows, if I impress myself enough, I might even become an interior designer. I’d flit around YouTube aimlessly, then relocate to another area to do the same thing while sitting at a desk or pacing around. Much like a housewife, I ponder quotidian banalities, conjuring new ambitions around them—then I’d forget my original train of thought before hyperfocusing on the next failed perfectionist plot to achieve this goal, start a business or new creative project, become a polyglot, master an instrument, remember every friend’s birthday, etc.

“A housewife is not a literal designation; it refers to a woman who appears to ‘have it all’—every desirable feature under capitalism, such as riches, beauty, and feminine accoutrements—yet none of it makes her a paragon in the eyes of other women.”

Shereé Whitfield of The Real Housewives of Atlanta labored for five years to finish construction of her French-inspired home, which she dubbed Chateau Shereé grandly and prematurely. Similarly, She By Shereé, her inspired couture-turned-athleisure apparel company, has experienced a number of false starts and failed launches. It’s unclear whether Whitfield has ADHD, but I’m inclined to believe she does. For some reason, armchair diagnosing her with it feels silly, whereas categorically labeling all reality stars as narcissists never does. When it comes to other people, we use personality disorder labels like narcissist and sociopath. But when it comes to ourselves, we use neurodevelopmental differences like ADHD or chemical imbalances like depression to explain away our own unique and unknowable inclinations or why we may find ourselves in conflict. Everyone else is pathological; we’re neurodivergent.

On Bravo, subjects out of frame—yet still in conflict—can be thought of as impermanent objects. They’re void of emotional constancy: the awareness that things and people exist even when they can’t be immediately sensed, or when they’re not in the same physical space anymore. For example, when the housewives are on temporary hiatus between the season’s wrap-up and the season’s reunion, remerging at the tapings of their respective “reunion” episodes, the psycho-dynamics errantly shift like their wigs, causing the women to fight each other with zero adherence to continuity. They don’t start where they left off at the end of the season; they pick up wherever their imaginations led them when they retired to their offscreen inner realities.

In 2014, on a writing retreat in Wales, I had an uncanny experience. Two of the retreat coordinators hooked me up to a machine that mirrors movements, letting me see and feel myself represented as a human entity outside of myself. The trick: Someone stood in front of me, copying my movements while the virtual reality headgear fed the sensory input as a mortifying mirror image of myself. I felt like a freak as I held my own hands and peered directly at my round face, overwhelmed by an unprecedented level of self-awareness. I’m not meant to witness myself in that way, before my very own eyes, like reality TV women do as representations worthy of empathy.

“I want to be real in the way that people are real in the Bravo universe: witnessed. I want to light up other people’s minds, because what is attention but love? What is love but object permanence?”

Before my experience in Wales, I always believed I was uncomfortable with attention, but I know now that it’s not attention I fear; I fear my own gaze back at me, because I know it to be as unkind and critical as my worst enemy’s. To see a false reproduction of myself—a Baudrillardian simulation, so to speak—felt like looking at a woman I didn’t know, a woman worth hating who is me yet isn’t me. After all, the way women—including the women on reality TV—hate each other is distorted mirroring. The difference is that, while other women are “fake” and “evil,” because we flatten and essentialize their existences in ways that preclude any claim to purity or artistry, we are humans who’ve integrated our own shadows. That is, until we are presented as simulacra to ourselves. So, it’s not that I hate attention. I hate what attention can be when the attention is coming from other women, because I am other women. 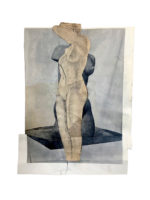 Throughout grade school, I used to hastily, self-consciously smear all my lipstick off, after applying it in the girls’ bathroom between classes, leaving just enough pigment to stain my lips a faint pink—just enough to not give anyone the idea that I think I’m pretty and worthy of attention, or that I’m aware that I’m being perceived, which is a nightmare scenario for someone who is more concerned with the gaze of others than my own. Today, I am still that girl. On some days, I oscillate between feeling as exposed as the tan lines on a celebrity’s skin or dirt conspicuously caught between poorly installed, cheap vinyl floor tiles. On other days, I construct a version of a reality show in my head, perhaps to mitigate the feeling that maybe I am not real. I suppose I want to be real in the way that people are real in the Bravo universe: witnessed. I want to light up other people’s minds, because what is attention but love? What is love but object permanence?

On the surface, the concerns of the women of the Real Housewives franchises appear unrelatable and bourgeois, but they represent anxieties around image, reputation, presentation, and identity that ordinary women are teeming with. They’re avatars illuminating womanhood’s dark matter and collective shadow—the illegible parts and imperfections we often try to dress up in liberal feminist platitudes and self-delusion, so we can appear perfect, not like God or like a machine, but perfect like a woman—perfect like a Real Housewife. 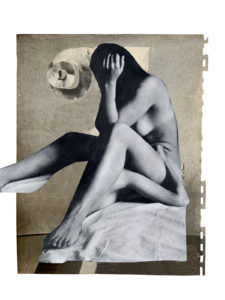 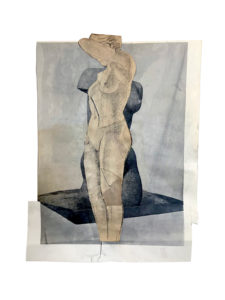