The artist joins Document to discuss mythology, Japanese lacquerware, and his latest show at David Lewis

Schlesinger is also a trained painter; he’s done some beautiful still lifes, gravitating towards similar subject matter, with a similar energy, to what he liked behind the camera. But if you search Peter Schlesinger Painting on the internet, you’ll be likely bombarded with clips of Peter Schlesinger with Polaroid Camera, Peter Getting Out of Nick’s Pool, and especially, Portrait of an Artist (Pool with Two Figures). They’re all works by Hockney—some of the most famous and expensive paintings in recent history.

Schlesinger came to sculpture later in life. His introduction to the medium, it seems, was the beginning of his fully self-determining artistic practice. “I felt an immediate bond with it,” he says. “I realized it’s a craft that you have to learn, so I really devoted myself to it.” Until February 26th, a selection of his newer works will be on view at David Lewis Gallery.

The show features traditional both vessels—painted with glaze patterns, textured, curved—as well as figurative sculptures: a pair of men, a crop of trees. The gallery’s press release includes an email writer Mark Stevens sent to Schlesinger after visiting. “Each piece seemed alive to me, uncannily so,” it reads. “They were like people I know.” The works indeed hold a certain personality. They’re largely biomorphic; they have humanity, and charm. Altogether, it’s a show worth seeing. Few would call Schlesinger a late bloomer—but it certainly seems he’s found his niche.

Morgan Becker: Does your show at David Lewis have a title?

Peter Schlesinger: No, it doesn’t actually—and I didn’t title the work either. I’m sort of not into titles. [Laughs]

Morgan: I ask because, at face value, the works you’re showing seem quite varied. What connects them?

Peter: The actual, physical way that I make a vessel, [is the] same technique I use for the figures. They’re all constructed in the same way, with slabs. That gives them all a similar form language, and they all have some kind of reference to humans. Even the vessels are human, in a way, because you actually refer to a vessel [with terms like] the feet and the neck and the body.

Morgan: Would you say that your creative process differs when conceptualizing figurative works versus more traditional vessels? 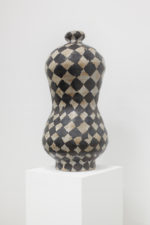 Peter: No. No, it’s about the same. I kind of go back and forth between them. I make a series of vessels, then I get tired of them. They both sort of inspire each other.

Morgan: Do you work quickly? How often do you make a piece?

Peter: Well, I work all the time. But some pieces are quite slow. I mean, I’m kind of methodical, and I build slowly, because I enjoy that [process]. I don’t know how often I make a piece. I suppose an average of somewhere between 10 and 20 pieces a year? It depends on how complicated they are to make.

The way I work with clay—you have to time it to have the clay the right dryness while you’re working, so it doesn’t collapse or get too dry. If you’re making certain shapes, you have to go slowly, otherwise they would fall over.

Morgan: Your figurative sculptures are said to evoke elements of mythology and fable. Can you elaborate on this, and tell me about how it came to be of interest?

Peter: I’m always looking at historical art. It’s really not the fable that’s [of interest to me]. I get into the certain poses of people—certain actions and things. They’re not specific, too often. Does that make sense?

Morgan: Yeah. Ceramic art is such an ancient practice, with these very recognizable historical motifs.

Morgan: Are you especially inspired by any era or region of art history?

Peter: I sort of go surfing around, through them all. [Laughs] When I first started, I was attracted to the most obvious ones, like Greek. I go through all of them, mix them up. Certain areas of ceramics—say, Japanese ceramics—they’re not as interested in form as they are in the surface glaze. I mix different cultures up in that way.

Morgan: Your works at David Lewis are exclusively glazed stoneware. Have you experimented with other materials over the course of your sculpture practice? 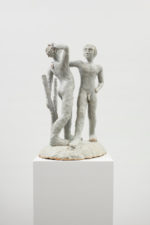 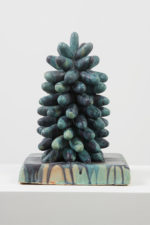 Peter: I like stoneware because it’s high-fired and you get a beautiful glaze. Porcelain has a very different look. I was drawn to clay, and then I liked the look of stoneware, and the way it has a different feel to it when you work with it. It’s good for sculpture—better than earthenware. Or porcelain. Porcelain is very fiddly.

Morgan: Tell me about the types of glaze you gravitate towards.

Peter: I’ve always made my own glazes. I’m very specific about the kinds of glazes I like or don’t like. I like matte glazes, for instance. I used to be a painter; I painted for 25 years before I did sculpture. I’m drawn to using that painting experience on the vessel, on the pieces. They’re painted with glaze.

Morgan: Where do your patterns come from?

Peter: I see things, and think, Oh, that would be great. [Laughs] I make a form, and then I have to think of what would look good on it. That’s what it comes down to. I don’t ever preconceive a design that’s going to go on a piece. I make, and then I have to think about what would suit that shape. Sometimes it changes, and it takes me a couple of weeks to figure out what will go on it—what kind of glaze. Sometimes I have a real idea, and it goes quickly.

Morgan: Is it similar to the textural elements—the decorative elements that protrude from your three-dimensional works?

Peter: That, you have to do as you [form the piece]. It’s integral to making—you have to [build protruding elements] as you’re making a vessel. That came out of Japanese lacquerware, when the surface has relief to it. And also, relief sculpture. It was an attempt to—instead of making a pattern in the glaze—make a pattern in the physical [object]. It’s an experiment.

Morgan: Besides your work as a sculptor, you take photographs, write, and paint. Would you say that sculpting has become your main artistic outlet?

Peter: Yes, I guess it’s the main one. I still do photography—some commissioned photography. But it’s mainly sculpture now.

Morgan: When did that shift occur?

Peter: Oh, when I started doing it. Doing the clay, I felt an immediate bond with it. There was a short period where I was doing both painting and sculpture. But I realized it’s a craft that you have to learn, so I really devoted myself to it.

When you first start, you have an idea in your head to make something, but it doesn’t turn out the way you wanted it. It takes a while to figure out how to make something that’s in your mind.

“You bring everything that’s in you, anything you’ve learned about, to [your work]… Everything you observe comes out again through you.”

Morgan: Were you formally trained?

Peter: No. I just decided to do it, and read a lot of books on how to do it.

Morgan: Would you say that your knowledge of other mediums bleeds into your work in sculpture, or vice versa? How does it all intersect?

Peter: I’m not sure the photography does, although I’ve exhibited them together in a gallery. Some people saw a connection between the two. But it’s the same spirit—and it’s the same person doing it. That is always going to have a relationship to it.

Morgan: Some of the allure of your photographs is undoubtedly their glamour: In your youth, you were already surrounded by iconic artists, and you really captured the essence of your certain, shared lifestyle.

How did the early days of your practice color your career as a whole?

Peter: You bring everything that’s in you, anything you’ve learned about, to [your work]. My early career—I didn’t really have a career. [Laughs] I guess I’m a late bloomer.

Everything you observe comes out again through you. 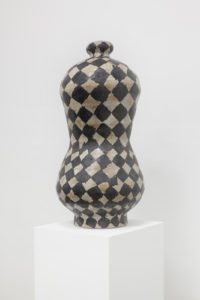 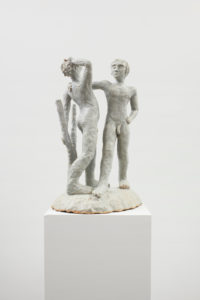 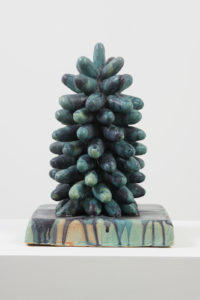