Change is the only constant for VTSS

The London-based dissident artist muses on the power of TikTok, seeking inspiration in new surroundings, and her latest EP ‘Projections’

It’s hard keeping up with Martyna Maja. As VTSS, her breakthrough came in 2018 via the Self Will release on Intrepid Skin. Freshly established in Berlin and backed up by her formidable reputation as a DJ, that EP placed her harder tempos and playful, surprising juxtapositions in the midst of a scene which often errs towards formulaic ideas about what works and doesn’t work in the club. Maja was carrying the underground spirit of Brutaz, the Warsaw club she came up in, and her blistering strain of techno appeared alongside artists like SPFDJ, Bjarki, and Emma DJ amongst many others. The most recent of those releases landed just a couple of years ago, but already feel like a distant memory. A lot has happened since then for Maja, as much as the rest of the world.

When we first connected, it was the middle of the summer of 2021 and Maja had just settled in London with her beloved King Charles Spaniel Mauro. As an artist increasingly on everyone’s lips within the techno scene, Maja had made the bold decision to escape the secure compound of the Berlin techno community to pursue a more unpredictable life in the UK.

“Everyone in Berlin was like, ‘What the fuck are you doing?’” Maja recalled over Zoom from her flat in East London. “After the pandemic, I didn’t see myself going back to the life I was having before. I’m one of those people that, when they feel too comfortable, they can’t really do anything. I love Berlin, but it always feels like this gap year after high school which lasts 10 years.”

When we reconnect, it’s January 2022 and Maja is back into the swing of things after a Berghain-induced bout of COVID and a short recuperation trip to Tenerife where she “did all the old German lady stuff—aqua aerobics, massages, stretch classes.” Working out how much time has passed since we last spoke, she laughs. “It must be at least three hair colors ago!”

If last summer felt like a state of flux for Maja—in a new city, waiting for normal service to resume in nightlife, tweaking her musical direction—then the beginning of this year feels more like the upward thrust of a rocket launch. The clearest signal of new frontiers being broached is Projections, a new six-track EP landing on Technicolour, the electronica-focused branch of indie behemoth Ninja Tune. The signs were there when we spoke before—her Borderline Tenderness EP had just landed, and her focused techno approach was giving way to broader tempos, palettes, and structures. Projections doubles down on that promise by jettisoning techno tropes altogether and swerving towards crunchy, angular electronica. There’s an inherent sonic stamp which logically carries through from the earlier VTSS tracks, but this is a pointed move into new terrain as the beginning of a relationship with Ninja Tune which centres around individual artist-led expression as opposed to scene-oriented participation. 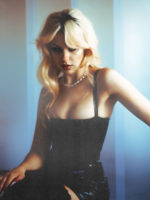 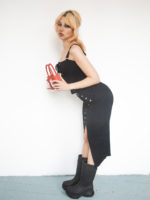 “I like to think it’s a natural progression,” Maja says as we reflect on the direction her career is heading in. “It never felt, for me, that it was some overnight blow-up. It was always the plan to keep growing.”

‘Career’ can often feel like a dirty word in underground circles, and Maja’s identity to date has always felt steeped in DIY independence, provocative otherness, and a lack of compromise. Doesn’t the move onto bigger labels threaten the individuality she’s nurtured since the early days playing raves in Poland?

“I’m not ashamed to admit I’m career-oriented in general,” Maja affirms. “But I was thinking a lot about what to do to be more successful, and sometimes I was even thinking, Maybe I should try making something lighter or play something that’s going to be more widely recognized, but I just can’t.”

Projections is certainly not the sound of artistic compromise in pursuit of success. It’s blown out and bludgeoning, veering from low-slung hip hop tempos to dembow rhythms, twitchy electro and disassembled gabba. It’s unrepentantly weird, licked with distortion and laced with the irreverence and playfulness which tells you it’s still VTSS on the buttons. It’s also telling that very few of the tracks even break the three-minute mark.

“I find six-minute tracks so outdated,” Maja explains. “They were made for a DJ able to mix it in on vinyl, but these days I don’t believe people have the attention span. I wanted to make electronic music the way pop music is made in terms of attention span and streaming. It’s still structured as a full track, but I don’t want people to be bored and skip through. I want people to actually enjoy it as a whole piece.

“Also, my ADHD has been really intense over the last two years, so I think this is also affecting it. I have no fucking patience to listen to my own music.”

While her musical outlook is broadening in unpredictable ways, Maja is also playing with her image with impulsive glee. Even a casual glance through her social media profiles shows a head-spinning blur of boldly defined looks—imposing, wildly varied characters who coalesce around a personality that’s equal parts empowered and vulnerable.

“Image is an important thing for me,” Maja declares. “I don’t want it to be separate—there’s no BTS, there’s no me privately, it’s all the same. So if, as a person, I’m going through a breakup and want to get bangs, I’m gonna get bangs. I mean, obviously, I’m kidding. I’m not that emotional…

“But I post some specific stuff and get comments that I’m being fake, and it’s like, I’m literally being honest here. I’m just showing who I really am. If I’m a bimbo at the moment, I’m going to be a bimbo on Instagram, I’m not gonna lie about it. This is who I am. Take it or leave it.”

“I think change is the biggest inspiration for me. And change in yourself, it affects the way you behave, the way you create.” 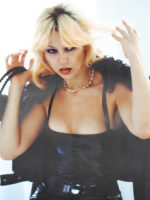 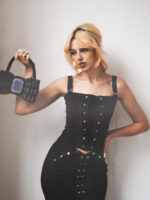 Maja has had to develop a thick skin on her journey through the techno scene to where she is now. She admits petty and depressingly predictable ‘techno bro’ trolling was a thorn in her side while exploring her passion for image within a genre largely holding onto tired ideas of anonymity or, at best, monochrome moodiness. When we spoke last summer, she had just released the fierce video to “Goin’ Nuts,” which placed her and LSDXOXO in devastating looks cut by Polish streetwear brand MISBHV, overseeing an ensemble of Berlin club cats criss-crossing a pallid concrete intersection.

From the outside looking in, it can seem like Berlin’s techno scene is defined by openness as pioneered by its queer communities, but Maja laments a persistent close-minded attitude from the more conservative voices embedded in the city’s nightlife, and from the broader techno scene overall. As a bold, beautifully choreographed visual piece, “Goin’ Nuts” reflects on surveillance culture and the everyday observance and other-ing that Berlin’s queer population experiences—something which can take place in the sanctity of the club as much as on the street.

“Conspicuousness for many queer people is a shield from the hostility of the world around. Clothing is armor, style is a defence, and fashion is a calling card for identity,” declared the text accompanying the Soul Suleiman and Leanne Mark-directed film.

“I got a lot of people complaining [about] the fashion involved in my music video,” Maja shrugged at the time. “And someone commented on the ‘Goin’ Nuts’ music video, ‘Since when is it cool to be in your music video?’ A friend of mine said the other day, ‘It’s not just about DJs in black and white pictures and V necks.’ Techno can be beautiful and have a lot more layers and elements.”

As her career pivots away from the trappings of a genre-specific style, Maja is heading into a space she can define on her own terms. She’s keen to point out that she hasn’t moved on from playing techno in the club, or indeed producing it’ if she’s so inclined, but rather that she’s no longer beholden to the supposed rules of the scene.

“We live in times when genre and different forms of art should be bending, so I don’t want to be just one thing,” says Maja, pointing to TikTok as a prime example of this boundary-less attitude within modern music. “Music on TikTok is all over the spectrum. Look at what happened with PinkPantheress. She makes amazing music and got huge just through TikTok, and it’s really cool that things can happen like that. Just observing what’s happening with the music business gave me a lot of courage to do what I want to do without thinking I have to compromise something.

“I’m trying to post more on there to get rid of this millennial mentality where everything has to be super curated and looking good,” she adds. “It helps me get rid of the fear of mean comments and stuff like that. I know it’s not perfect, because there are still beauty filters and girls promoting looking a certain way, but I’ve learned so much from TikTok and I find it such an interesting tool in terms of music promotion. I think it’s absolutely revolutionary and things are never going to be the same.”

Maja places great importance on staying connected to new developments, and after all, why deny the reality of these virtual portals in which so much of the human experience now takes place? As someone who has grown to love her image and how to play with it, she considers her presentation on TikTok, Instagram, Twitter, or anywhere as a necessary extension of her art as a musician. 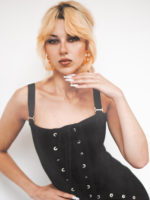 “I don’t believe in trying to be anonymous. I know a lot of people relate not only to my music, but also to me as a person. If a specific artist turns out to be a horrible person, there’s no separation. I’m not going to be able to listen to his music and just be like, ‘Oh, it’s still slaps,’ if he’s a fucking rapist, you know? And so me as an artist is the same as me as a person. It’s not a separate creation.”

Maja’s highly visual identity is absolutely entwined with her music, and by design it’s hard to get a fix on one definitive image. Like the scramble suits Phillip K. Dick imagined in A Scanner Darkly, her many looks and sounds zip by when VTSS comes to mind. It’s refreshing, offering up the kind of effervescent personality that inspires true fandom—something the self-conscious 21st Century has rarely nurtured. And in the spirit of rock stars of old, it’s hard to know what Maja might do next.

“I love changing everything about my surroundings,” she admits. “Moving countries, moving houses. I think change is the biggest inspiration for me. And change in yourself, it affects the way you behave, the way you create.”

She told me last year she was just trying to figure out how to do things differently, but from where I’m standing VTSS has been doing things differently since the beginning. As her trajectory continues to race upwards and outwards, the chance and probability are only getting greater. Check back in six months and things could be very different once again. 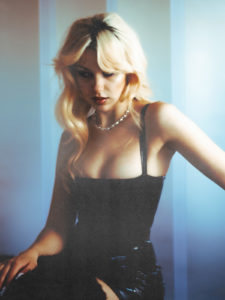 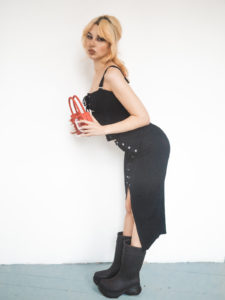 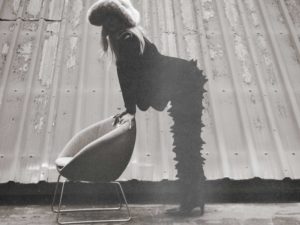 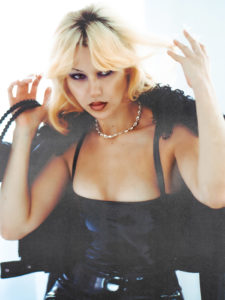 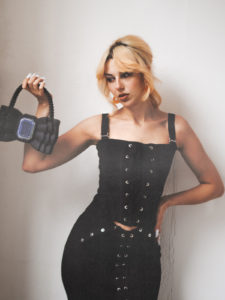 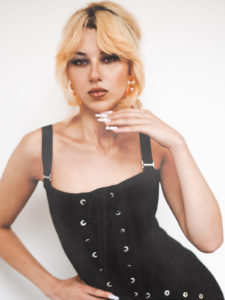 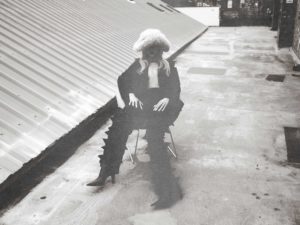