The work of Billie Zangewa is currently on view at multiple venues around the globe. A solo presentation titled Billie Zangewa: Thread for a Web Begun opened at the Museum of the African Diaspora in San Francisco in October 2021 and runs through February 27, 2022. The artist, who lives and works in Johannesburg, South Africa, also had recent solo shows with her gallery, Lehmann Maupin, at sites in Seoul and London.

The works in this exhibition depict quotidian rituals that offer the viewer a reason to contemplate activities we take for granted such as taking a nap or bathing. These habits are mundane but they sustain our lives, the artist seems to suggest, most especially during the fraught time of COVID. During quarantine, how does one counter the feeling of alienation? Zangewa shows us that the tools are literally at our (her) fingertips: by caring for oneself or for someone you love. The labor-intensive handwork and stitchery, a process she has previously described as meditative, belies these portrayals of ordinary leisure. Oftentimes, these scenes include her young son as her interactions in the collages convey her role as a mother. In others, the artist may appear alone, situated in a sumptuous setting, enjoying her own company, performing an act of self care. These works often remind me of those by Mary Cassatt, an Impressionist painter working nearly a century and a half ago, mapping feminine spaces of quietude and solitary reflection. Or the mid-twentieth century works of multidisciplinary artist Betye Saar, who explored and advanced, in those early works, the trope of artist-as-mother; artist and mother. Or even Renee Cox, who, like Zangewa, came to fine art by way of the fashion industry, and exalted Black motherhood in her iconic Yo Mama series from the 1990s with photographs of herself with her children, reinterpreting canonical Marian works. 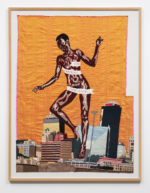 Zangewa’s use of silk has complex meaning and can be viewed from multiple points of entry. The silk itself becomes metonymous with what her collages convey: luxury as material; luxury as a celebration of selfhood. Her inventive use of different textures in the fabric is also compelling. In High Hopes (2019), a collage depicting Zangewa taking in a cityscape from her bedroom window (this work is not included in the MoAD exhibition), the intricate stitchery to make the striations in the bureau and the pleats in the lampshade above it contrasts with the subject’s teal nightgown; so smooth in comparison, the viewer can almost sense the silk against the skin. Painter Wayne Thiebaud called this effect “object transference,” defined as the technique of depicting something with tactility so that it is practically as palpable as the thing itself. Though I have compared Zangewa’s collages to several paintings and painters, it is important to note that, while her aesthetic is painterly, her aim is not to create the illusion of a painting. The collages, characterized by their irregular borders and conspicuous cutouts, are self-referential and meant to heighten the viewer’s awareness of silk as the medium.

Speaking of luxury, one of Zangewa’s works, which seems to have been made especially, is prominently placed in the sleekly designed Christian Dior survey currently on view at the Brooklyn Museum. It is a brilliant pairing: the artist uses her signature silk stitchery to depict the famous couturier at work with his own trademark fabric.

It has been exciting to see how Billie Zangewa’s hand-stitched collages have grown in scale as well as conceptually since her debut earlier in the decade at 1:54, an art fair which focuses on artists from the African continent. I look forward to her future projects and what she will teach us about finding beauty everyday. 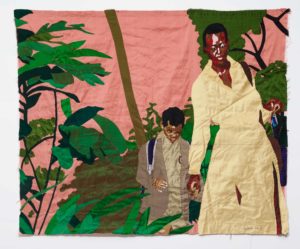 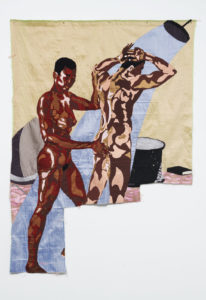 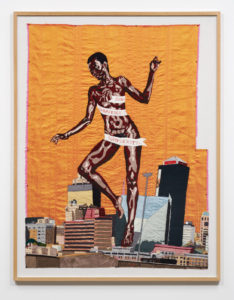 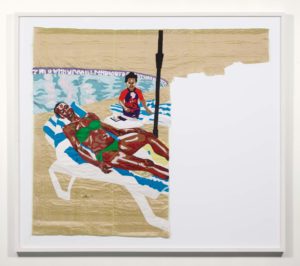 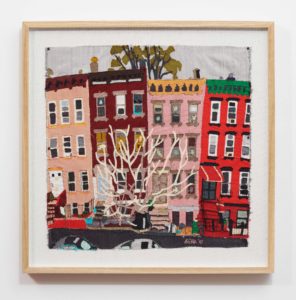 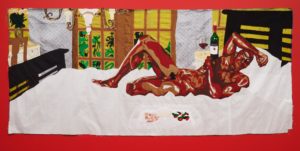 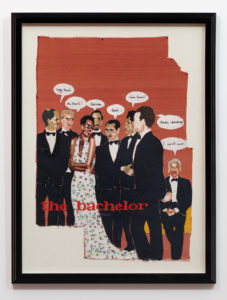 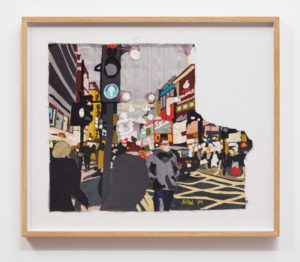 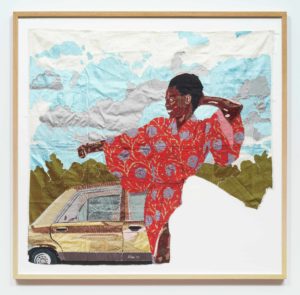 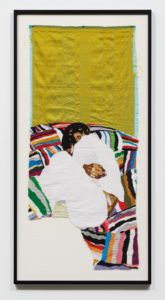 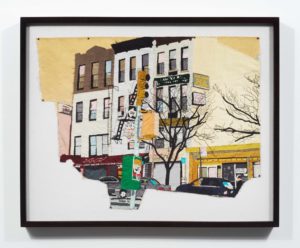 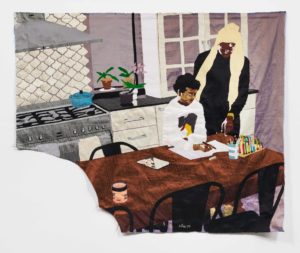