Miles McCollum, 24, of Mableton, Georgia has millions invested in the stock market, his own cryptocurrency of which 25,000 coins sold in less than 22 minutes, and multiple houses filled with rare collectibles. His wealth is not generational and the rare collectibles are, in fact, sneakers, some of which are valued at thousands of dollars in resale. Their value would likely rise if they were worn by McCollum, who is professionally known as Lil Yachty.

Money in excess is not unusual for those dominating the rap game, as Yachty is. It’s a staple in the lexicon of rap lyricism, serving as a tangible demonstration of self-created glories. Yachty is, perhaps, different from his predecessors in that his interest in money extends beyond enormous jewelry and luxury vehicles. While he does wear the gold and collect the cars, he also displays financial savvy.

Yachty is a millennial-Gen Z cusper, born in 1997—the dawn of the internet generation. His sensibilities are distinctly Gen Z. A pop-in grill often hidden behind brightly-colored beaded braids and a fascination with financial wellness are equally products of his time. Yachty explains the driving force of inspiration behind his vast pursuits and self-education; “Money, money.”

A 2020 report by Data for Progress confirms the obvious: millennials are on track to be the first generation that will not surpass their parents in job status or income. It’s unsuprising then that Gen Z is fighting for financial health, desperate to not fall into the same patterns as their despondent predecessors. Yachty is not wholly succumbing his monetary wellbeing to a hired consultant, and his generational contemporaries share a similar desire for control.

Where millennials came of age during the Great Recession and a masturbatory war on terror, Gen Z’s introduction to adulthood can best be characterized by a tyrannical reality star turned politician with a power-drunk finger dancing between “WAR” and “FONDLE,” summers that sputter with threats of fire, the philosophical burdens of great social reckoning, and the resentful generations who built it all hissing “ungrateful” in their direction.

The insurmountable debts acquired by millennials struck a chord with Gen Z, with the younger generation’s fear of student debt resulting in delayed rates of education. A survey by fintech company Greenlight found that teens have low confidence in their financial literacy, but understand its importance and are hungry to learn. As less than half of U.S. states require a personal finance course for high school students, teens have sourced their own education alternatives.

Finance, a sector once wholly oozing with stuffiness and self-indulgence that limited itself to the greedy elite, is now cool, thanks, in part, to Yachty and those like him. It’s coolness derives from its accessibility in digestible ways to learn about the systems (see: tax-code explainers on TikTok and a myriad of personal finance podcasts) and new routes of subversion to it’s barriers to entry (see: investment apps and imitators of probably sub-legal Congressional stock activity).

Gen Zers, alongside millennials desperate to change their narrative, have taken to finding new ways to pay off debts and pay for their expenses. A report by E*TRADE Financial Corporation found that during the pandemic alone, the risk tolerance of investors under 34 has skyrocketed to 23 points above the total population. Younger investors have also been trading equities and derivatives at higher rates than the total population.

It seems fair to assume that a decade ago, the suits of Wall Street would scoff when confronted by the question of whether they felt threatened by a web forum, likely dominated by the hollow-chested in their late-stage teens who sneer through poorly washed Invisaligns. Yet, when the r/WallStreetBets subreddit bulldozed into national consciousness after driving Game Stop’s stock to unlikely heights, the financial elite screeched with the fervor of a slimy, bug-eyed creature whose precious reason to live had been threatened. The old guard of the stock market generally required those who wanted to play to have at least enough money to acquire a brokerage account with someone gauging it for fees. The new guard simply needs a smartphone with enough storage space to download an app on which they can trade in pennies for free. (Yachty, for his part, has turned to more traditional investment strategies. “I don’t even know how to use fucking Reddit,” he insists.)

Robinhood, the app which acted as the hired horse for Redditors storming the stock market, is specifically geared towards those investing in smaller amounts, and specifically, young investors. The app offers students $15 to start trading with, a tempting offer for those in the process of acquiring debt. Since the app’s launch, it’s drawn 10 million user accounts, a quarter of which belong to first-time investors.

Following the GameStop fiasco that saw payoffs for some stock-market underdogs and billion-dollar losses for private equity short sellers, the Securities and Exchange Commission announced its investigation into Reddit’s retail investors for alleged market manipulation. “Extreme stock price volatility has the potential to expose investors to rapid and severe losses and undermine market confidence,” warned Allison Herron Lee, the acting chair of the SEC, in a joint statement with SEC commissioners.

The Securities Exchange Act of 1934 which restricts such alleged manipulation largely interprets manipulation to involve deception. While the actors involved in r/WallStreetBets did coordinate stock action, there were no clear attempts of deception.

The Reddit conversations, which represent the new guard of stock market players, shorted the stock with sheer optimism and hope for the group as a whole. That community-oriented thinking is not present in similar short-selling actions of the old guard.

Bill Ackman, a notorious short-seller, most recently made headlines betting against the market in the early days of COVID. Just one week after telling CNBC “hell is coming,” Ackman turned a $2 billion profit. Where Robinhood’s users turned to Reddit to coordinate amongst one another, Ackman took to television to implore the public to take action that resulted directly in a payoff for him.

With apps like Robinhood and a generation of youth eager to squeeze the benefits that the older elite has long dominated, the hypothetical bouncer abandoned the doors of the world’s biggest casino.

The appeal of money making money is indisputable, however small or big that sum of money may be. The stock market was once a giant that almost exclusively served to benefit those who could afford to (and didn’t need to) play it. While Yachty has a bigger pool to pull from than his generational contemporaries, he is representative of the loud-mouthed, sharp-eyed youth that’s shoving itself between the stuffed shirts. Now, with rising accessibility and increasingly looming debts, stocks are everyone’s game. 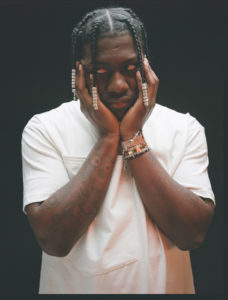