A collaboration with the Fondation Cartier and United Visual Artists, the exhibition synthesizes the disappearing sounds of the natural world

At first, the room is dark and hushed. Then, the sound of insects—like twilight’s arrived, all at once. Green light cuts across a floor-to-ceiling screen, narrow at first, then widening and fluctuating in tandem with a symphony of natural sound. Elephants trumpet, primates screech, frogs keep the beat, and birds, the melody.

The Great Animal Orchestra, commissioned in 2016 by the Fondation Cartier pour l’art contemporain, has reached North America at long last. The installation has attracted more than a million visitors across cities like Paris, Milan, London, Seoul, and Shanghai, finding its new home at the Peabody Essex Museum (PEM) in Salem, Massachusetts. The work is a collaboration between musician and soundscape ecologist Bernie Krause, and United Visual Artists (UVA)—a London based collective founded by Matt Clark that integrates novel technology with traditional artistic media.

What’s emerged is a wholly immersive audio-visual experience: Krause’s natural-world recordings transport the space—biomes in North America, Latin America, and Africa appear, in turn—while UVA animates the sound waves, in all their layers and complexities, all in real time. It’s a representation of biodiversity that’s tangible, and thus celebratory. Implicitly, though, it’s also a call to mourning: Upwards of 50 percent of the installation’s recorded sounds no longer exist in the real world. They’ve vanished, just in Krause’s lifetime.

“We synthesized the water, we synthesized thunder, we synthesized waves,” recounts Krause in a biographical documentary; directed by French filmmaker Vincent Tricon and produced by Fondation Cartier, the short film screens in a theater neighboring The Great Animal Orchestra installation at PEM. “Part of our rationale for the time was, ‘Well, this may be the only way that we’re going to hear natural sound after a while, at the rate things are beginning to disappear.”

The great outdoors was approaching, meandering around Krause’s commercial career. His album In A Wild Sanctuary was ecology-themed, for instance, incorporating natural sound with traditional instrumentation. Eventually the great outdoors coiled, tightened, and Krause quit music entirely. Apocalypse Now was his final project. He went back to school for a PhD in marine bioacoustics—the rest is history. Over the course of his academic career, Krause has recorded 5,000 hours, capturing the calls of at least 15,000 terrestrial and marine species across the world.

“It’s the source of our language, it’s the source of our music, it’s the source of our literature,” says Krause, in regards to his mission. “It’s the way we understand the world.” The Great Animal Orchestra’s international success is indicative of its universality. It’s suggestive of something missing from modern urban life. But more than either, it’s a testament to the power in witnessing a bona fide life’s work—especially when that life’s work contains a profound, unquestionable conclusion inside a society rife with conflicting truths. The natural world’s health is failing—and quickly.

“The whole idea of these soundscapes is that they represent the narrative of place,” says Krause. “The organisms are life-affirming. They’re reaching out—crying out to us—for just another breath, another chip, another expression. That’s what we’re listening to. And what we do about that is going to make a big difference.”

The Great Animal Orchestra is on view at the Peabody Essex Museum through May 22, 2022. 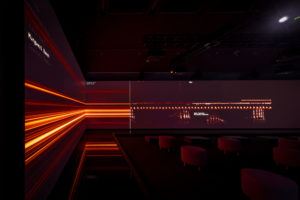 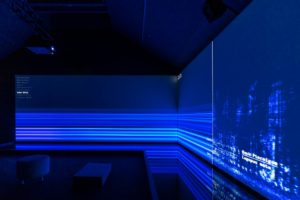