Lewis was joined by Ava DuVernay, Carrie Mae Weems, and Theaster Gates at the most recent iteration of Vision & Justice at Frieze New York

Two years ago I was invited to Vision & Justice, a two-day convening at Harvard University conceived by scholar Sarah Lewis, an associate professor of history of art and architecture and of African and African American studies. The symposium stemmed after she guest edited the May 2016 issue of photography journal Aperture that was also titled Vision & Justice. Although I was aware that Lewis was the author of The Rise: Creativity, the Gift of Failure, and the Search for Mastery, I had no idea how much this conference would end up impacting my life. I saw Yara Shahidi and Naomi Wadler discuss the adultification of Black girls with Harvard professor Robin Bernstein, learned that photographer and historian Deborah Willis wrote “Black Photographers, 1840-1940: an Illustrated Bio-bibliography,” the first comprehensive book on Black photography, and I felt the impact of public interest attorney Bryan Stevenson’s talk on race and the American prison system. I emerged from the conference inspired and ready to learn and help change things — for the better.

When I learned that the 2021 edition of Frieze New York was paying tribute to Lewis and Vision & Justice, I was intrigued and elated for many reasons. I was curious to see how Lewis’s vast community and network of supporters, who include just about every major person of color in culture, would pay tribute not just to Lewis, but to this life-changing project that had transformed me. Frieze was also the first major New York art fair to take place 14 months after the last one, The Armory Show, ended just as Covid-19 took its grip on the world, changing our lives and the way we see them forever.

Thanks to the pandemic, one did not need to attend the fair in physical form to see the many talks organized for the tribute. One of the first, “Frieze, Tina Kim Gallery and The KACF present: ‘Building Understanding in the Face of Adversity” with Guggenheim Museum Asian Art senior curator and Global Arts senior advisor Alexandra Munroe, Korean American Community Foundation (KACF) president Kyung B. Yoon, and ABC News Nightline co-anchor Juju Chang — particularly struck a chord with me because one of the topics, the dramatic rise in violence against Asian Americans in the United States, had caused me (I’m Filipino-American) to not just have a lot of self-reflection, but to also try and help facilitate change. Another discussion between photographer Dawoud Bey and Leigh Raiford, chair of the African American Studies program at the University of California at Berkeley in conjunction with Sean Kelly Gallery.

The marquee event, a Prada-sponsored talk between jazz great Wynton Marsalis, director and filmmaker Ava DuVernay film executive and founder of The Black List Franklin Leonard, and artists Carrie Mae Weems and Theaster Gates. “We are in an urgent moment in history,” said Lewis. “The country has been in such moments before, but I think what’s unique about this particular one is that it has a distinct character. It offers us mere daily reminders that the fragility of rights in the United States is not just secured by norms and laws, but by culture, by regard, how we see one another, and how we fail to see one another. It’s really a blind spot of the Constitution, one that the 14th amendment was meant to secure, but we know in fact, when you look at the history of this country that the reckoning of our current moment also reminded us that culture has really performed this work instead. It’s given us a way to create narratives that enlarge our notion of who counts, and who belongs in society.”

I finally made it to the actual fair, held in the massive Diller, Scofidio, + Renfro structure The Shed. This time was different from the other times I had attended Frieze New York. Tickets were far more scarce than ever before, due to Covid limitations. On top of that, attendees were required to fill out a health and safety form proving that they were not currently sick, and they had either recently tested Covid negative, or have had the full course of one of the vaccines. I opted to peruse the fair from the top to the bottom, but it was on my way up to the highest floor that I finally caught a glimpse of the first Vision & Justice tributes, massive vinyl pieces, placed strategically on the walls alongside the escalators. Two panels by Weems displayed images of Black contributions to culture in book form, featuring titles like Lewis’s The Rise, Jamel Shabazz’s Back in the Days, and Awol Erizku’s monograph. On the next floor, two panels created in conjunction with For Freedoms stood next to each other. The question “Who taught you to love?,” by Hank Willis Thomas, hung alongside Mel Chin’s words “Better together.,” a call for Black and Asian solidarity. 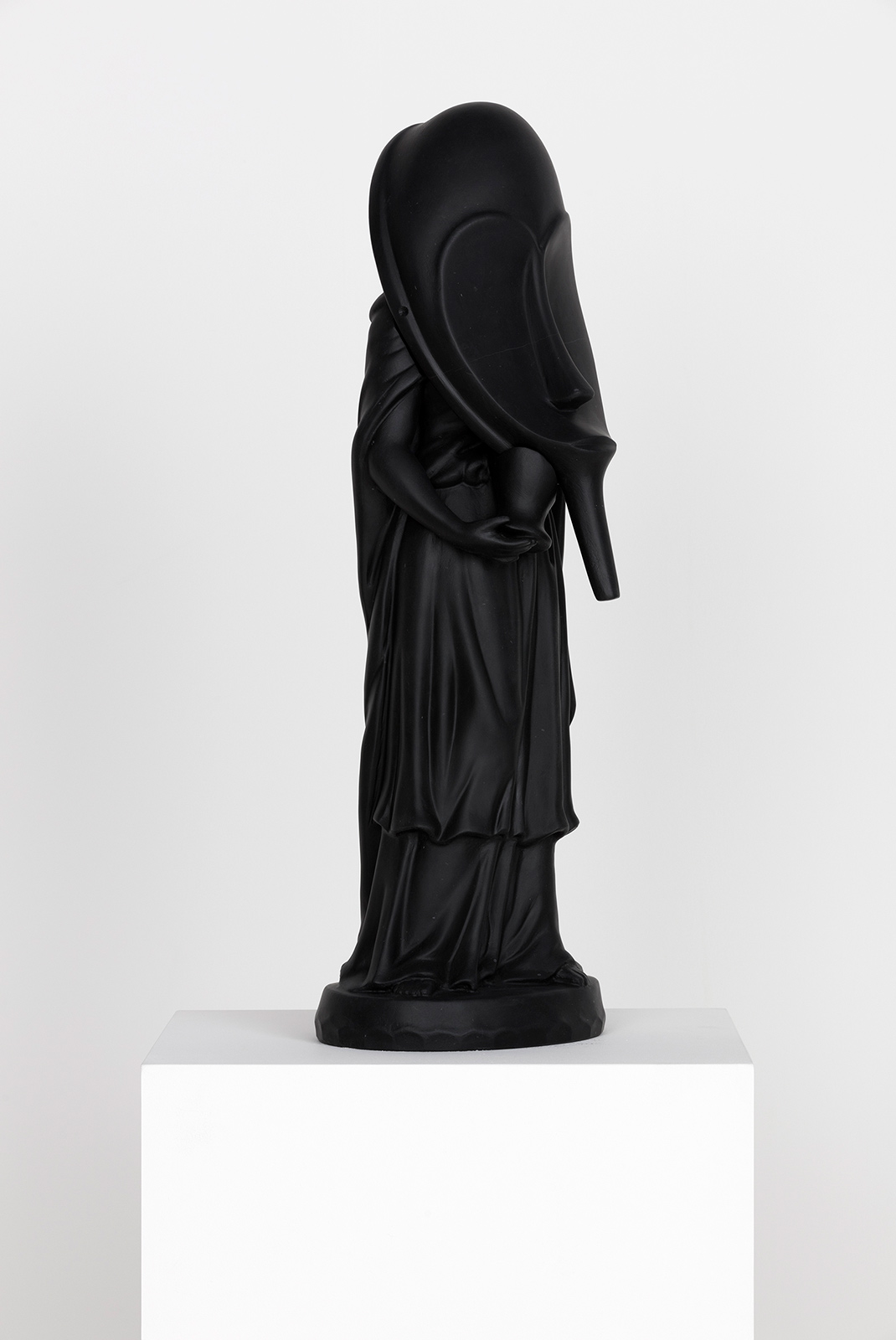 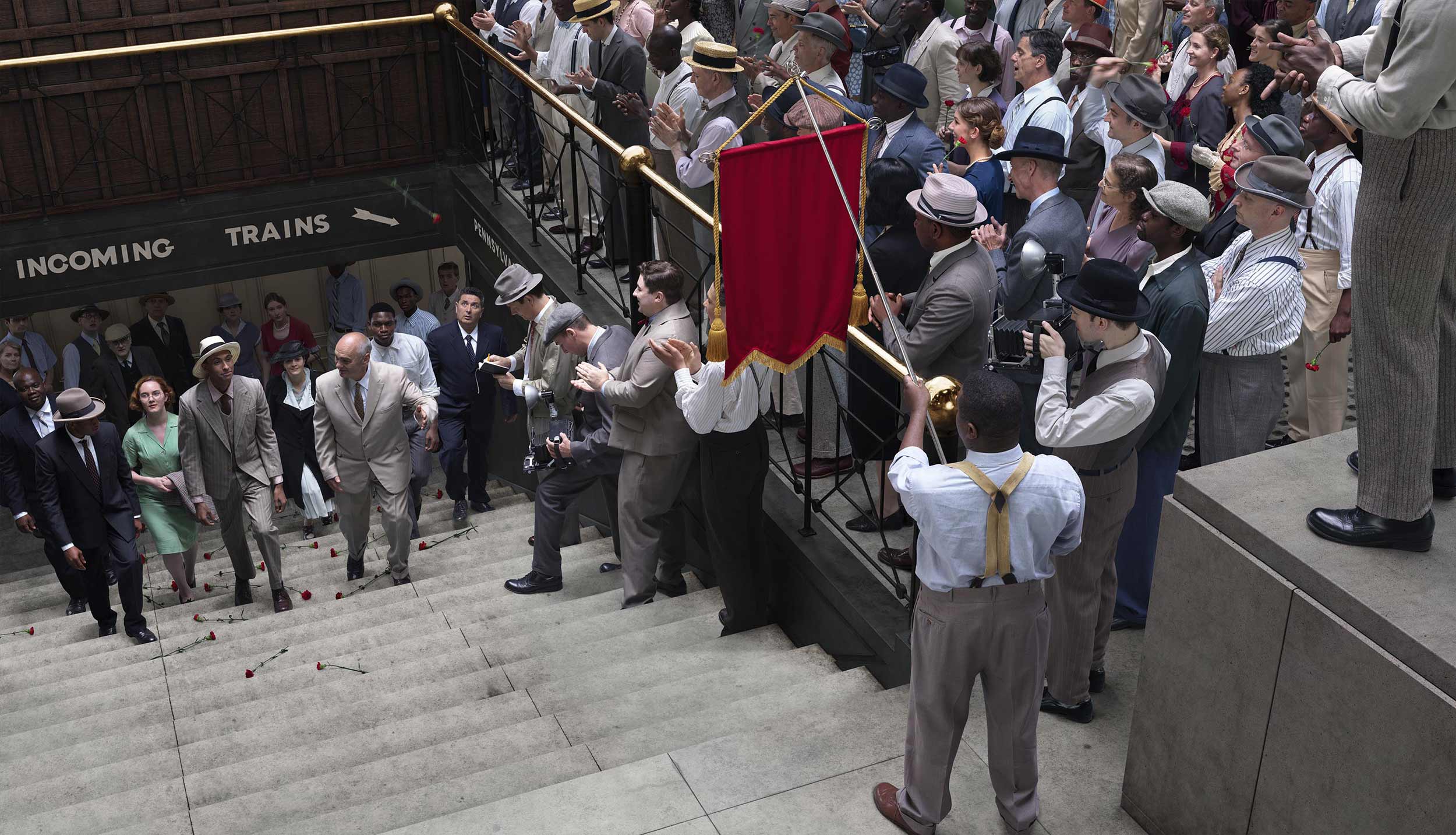 A myriad of other art works were sprinkled throughout the fair and the city. At Massimo de Carlo, a sculpture by Sanford Biggers dismantled the power dynamic between European and African art. In the lounge, a photo by Stan Douglas pays homage to the August 7, 1934 image of Black labor organizer Angelo Herndon, who was unfairly sentenced to a chain gang in Georgia and death for possessing Communist literature, as he exited Penn Station after being released on bail. A 2012 photograph of Braxton McKinney and Lavon Thomas by Bey hangs in Bey’s current exhibition at The Whitney.

Vision & Justice — which was inspired by abolitionist and intellectual Frederick Douglass’s Civil War speech “Pictures and Progress,” in which he discussed “the transformative power of pictures to affect a new vision for the nation” — is sure to emerge in yet another form in another place, inspiring new people to open their eyes to things they did not realize existed. It is not just Lewis’s undertaking, but one of a large community of people who seek to find justice through culture, work towards something better that will continue for generations to come.