The Gen-Z icons and their post-blockbuster, independent pop are shaping the mainstream soundscape—without conforming to it

“This is a rhizome kind of beat,” says an anonymous user attending the same event I was. The event in question was definitely not a Deleuze & Guattari online convention, although it involved another collaborative ampersand. Livestreaming from the placid Scandinavian peninsula, Benjamin Reichwald (aka Bladee) & Timur Tokdemir (aka Mechatok) launched their full-length album Good Luck on the internet—a phenomenon that is not so weird considering the state of the world and the age of both the organizers and the participants. The whole scenario felt like arcade video game-meets-slot-machine suburban casino, the aesthetics perfectly aligned with the sonic world the two have been building together over the past five months.

The title of their album, released via the Stockholm-based label YEAR0001 (home to the works of Yung Lean, Whitearmor, Ecco2K, and Thaiboy Digital among others), might be Good Luck, but if there’s one thing to learn from the pairing, it’s that success is no happy accident. The two know how to crack the pop code; they have been religiously repurposing early-2k Euro-dance tropes for years now, through both sound and images. Their approach to music-making detours toward a kind of paradoxical limbo: a space where their version of post-blockbuster, independent pop can riff on mainstream dynamics while retaining a sound all their own. In a sense, these are hit songs that, yet, do not belong to a 100%-algorithm-generated Spotify hits playlist.

Walking the fine line between pop and experimental music, Bladee and Mechatok have both helped redefine the standards of global sound. If you’re familiar with their previous work (aka: you are in your twenties), you might recognize this is a match made in heaven; if not, the twenty minutes it takes to listen to their 8-track album should be enough to convince you.

Federico Sargentone: I logged into the livestream a few hours before the launch of Good Luck, as I wanted to make sure I got the registration right. What I see when I check the link is fans commenting at a crazy high-speed in the chat, hours prior to your scheduled appearance. It felt quite nostalgic—imagine kids queuing up at the concert’s venue and then taking their spot in the pit. The whole thing made me realize the importance of the community supporting your work. How’s your relationship with your fandom?

Bladee: It’s important, of course, to have people who follow my work. I wouldn’t be able to do it without them. Although, I don’t interact a lot with my fans; I just never have, because I guess I don’t know how to do it.

Federico: I think these things can put on a lot of pressure.

Bladee: I don’t want to include other people in my creative process, as I don’t really make music for anyone other than myself. I think it’s better to keep the process separate from the audience, and the fans like it because it’s me doing it this way. I think everyone’s happy as it is.

Federico: Seeing these people going crazy on the chat for hours struck with me—real engagement! How was the streamed performance for you guys?

Mechatok: We were planning to perform the album at party situations. But, in the end, we had to find a way to do that without the club. To be honest, I’m actually happy that we did it because in some ways doing it in the club itself could have not been this surreal.

Federico: You both had quite an outfit! 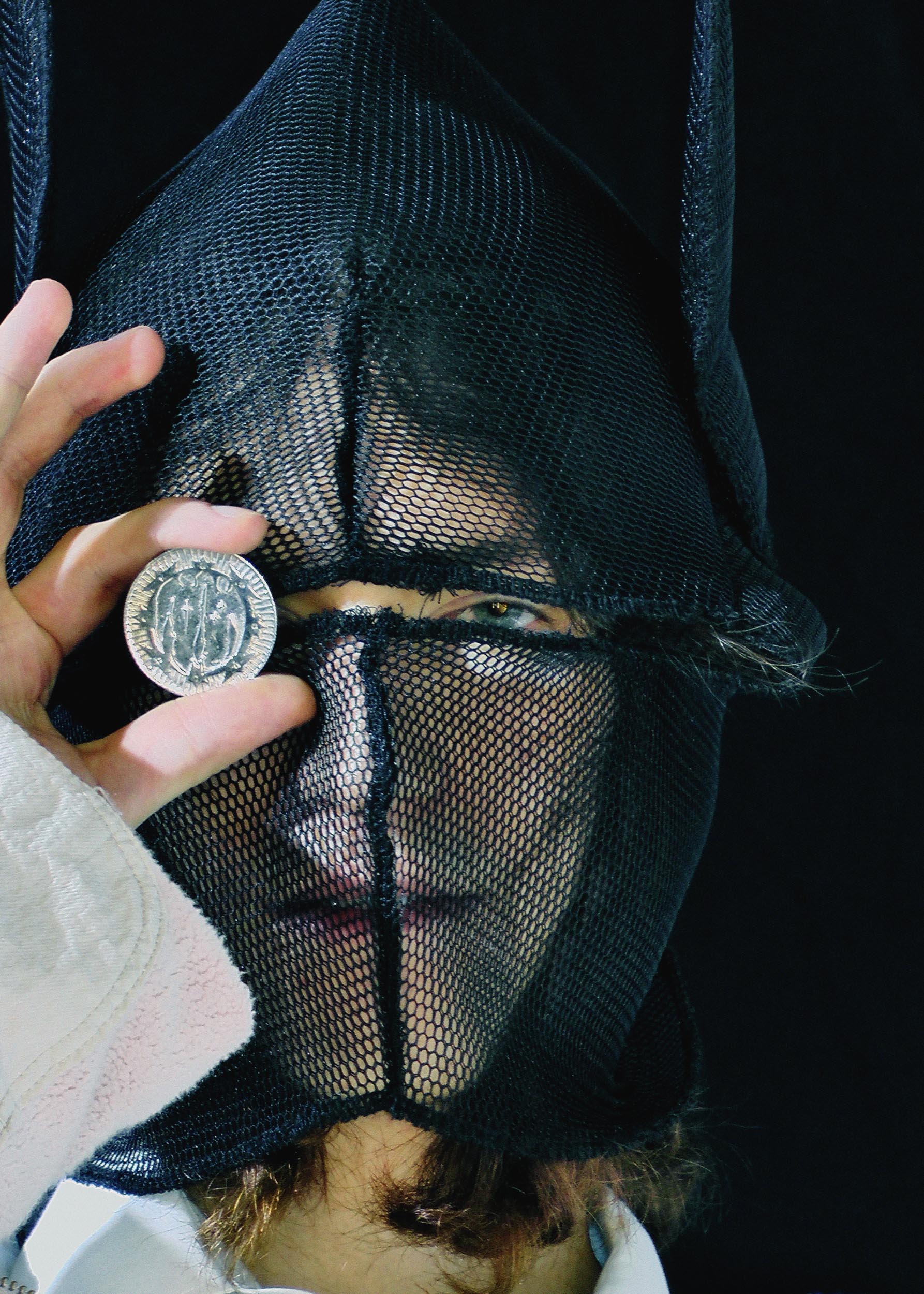 Mechatok: Yeah! We set up these big LED screens, like a little box that we were playing in. It felt like a TV show.

Federico: The performance was the output of a process that you guys did together—your full-length album Good Luck. I imagine it took quite a while. Were you living in the same city? Producing remotely?

Bladee: Mostly we were together. When we started working on the album I was living in Berlin, and Mechatok is based there too. I went back to Stockholm in April. We were finishing the music and we came up with the concept. At that stage, we decided that we wanted to do this whole thing together, so Timur came to Stockholm and stayed for like a month.

Bladee: Yeah, right! I feel like that was such a huge part of the album—making both the music, and all the architecture surrounding it together. We were working very closely the whole time.

Federico: So you’ve had time to jam in the studio. It’s not Mechatok making a beat, and Bladee doing vocals on it. I mean, it was all very collaborative, right?

Bladee: Definitely! It was just the two of us doing everything together for four or five months.

Mechatok: Yeah. All the beats were tailored for Benjamin. It wasn’t instrumentals that already existed. I loved working that way, cause I didn’t really do that before.

Federico: Did you know each other before?

Bladee: Yeah, but we got to know each other really well through this process.

Federico: What do you think is the common ground between your respective practices?

Mechatok: It’s definitely all about melody. We have a similar take on it, and once we’ve got that figured out it wasn’t hard to make things.

Federico: Both of your respective work actually reflects that: there’s this particular inclination towards early-2000s melodies and the texture of the sound, right?

Bladee: For sure. Particularly with the lead melodies, where the vocal hook sounds like a lead synth. And that was a really big thing around the 2000s.

Federico: I mean, if you take the hook on “Rainbow,” for example… It’s definitely a massive hit-song. I feel that both of you are interested in this hit-making practice.

Bladee: Definitely! When it’s Bladee and Mechatok on a song, what else could it be? I guess we’ve never set out to do that explicitly, but that’s what came out of us getting together and making music. So yes, we made some hits!

Federico: Did you have the lyrics written down before? Or you just went freestyle?

Bladee: A lot of it was freestyle, actually. I usually record something, pass it to the producer, and then record again. But in this case, it was more Timur playing something he’d written and I’d just come up with words—like straight away. We recorded and just kept building on that.

Federico: And then make a hit!

Mechatok: In production-mode you have this thing for playing hit melodies all the time! Like, we just recorded the “God” hook and I jumped over the couch as soon as I wrote that part.

Bladee: Yeah I had some good moments when we were recording. I kind of cried on tracks, when we were both like “Okay, that’s just it!” 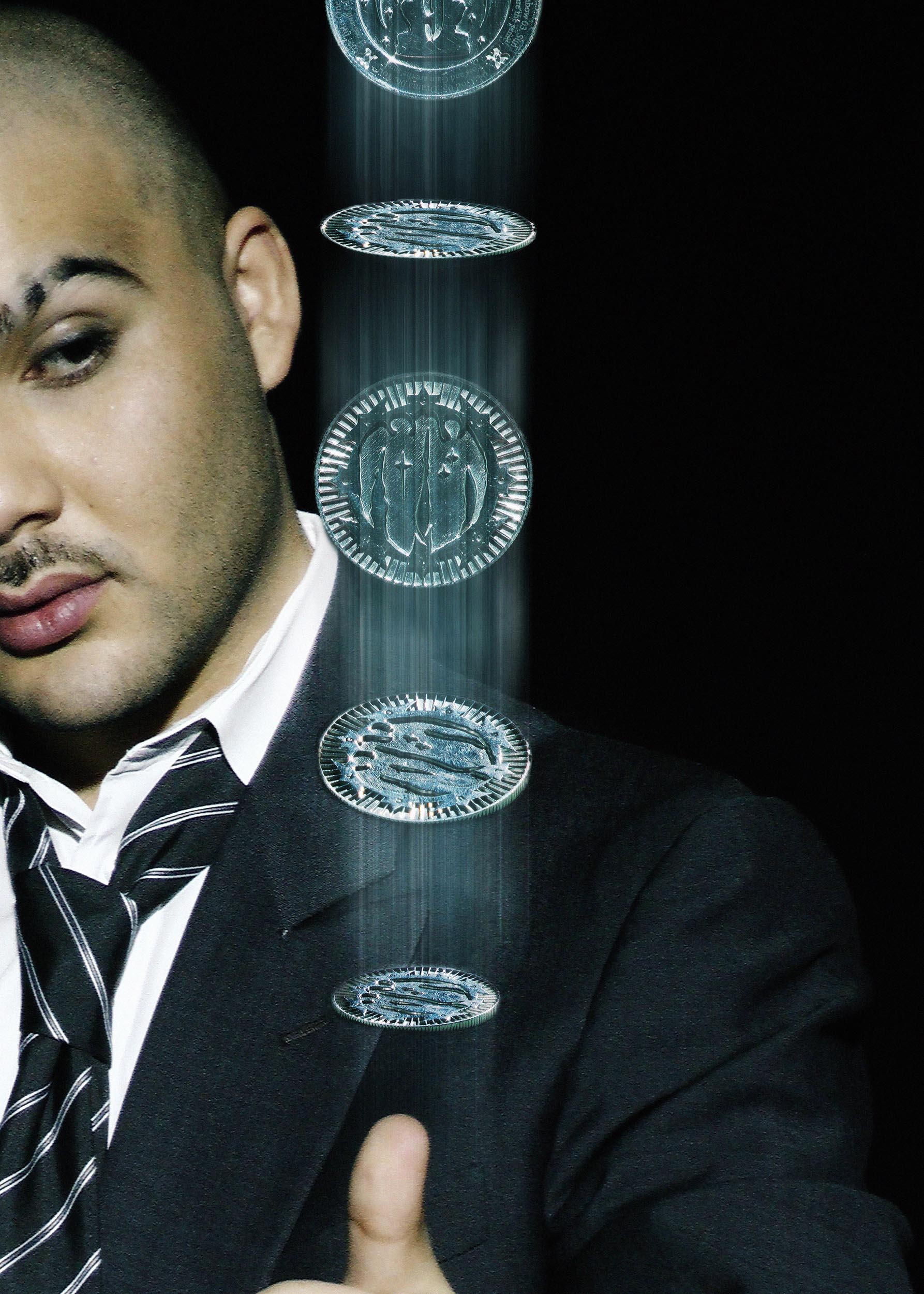 Federico: That’s what it takes! Since we’re talking about it: what is the perfect hit to you?

Mechatok: We were listening to a lot of music during the making of ours; there were some songs on rotation all the time. I feel the common characteristic between them was that the synth lead and the vocal melody were almost interchangeable. “Rainbow” is the most literal example: the synth is playing exactly the same thing as Benjamin’s voice. To me, the conversation between the lead melody and the lyrics was hitting really hard! Another thing is that we tried to strip things away from the songs as much as possible, until you have this very essential sound. It’s almost the approximately purest form of a song.

Bladee: Some old Darren Styles songs were on quite a lot! That just sounded so straight-on, super true to me.

Federico: The other thing is: a hit makes a star! You’ve become a Gen-Z icon, if such a thing exists.

Bladee: My thing with fame is that it’s not something I particularly strive for. I want to become successful, but I do think that if that happens, I should use it to do more cool stuff, to have more opportunities. I think it would be pretty funny.

Federico: How would that be?

Bladee: I’d become the powered-up version of myself! [laughs] And it’s a good thing, as long as I can create stuff with bigger budgets, and still keep my vision to convey what I want to do and say.

Federico: Timur, I imagine this album brought your music to a wider-than-usual audience. How are you handling it?

Mechatok: Man, I really have to thank Benjamin as he’s been putting me on big-time throughout the last year. Now I can get more opportunities to be a producer—like, for pop stuff. It’s getting really fun.

Mechatok: Yeah, you’re right. I was always in this underground electronic music scene, although I’ve never made clubby records, you know? My tracks were still usually very pop-ish, so I feel like it was meant to be. I was looking for it—to go into what you could define “pop music.”

Bladee: Yeah, Timur’s music to me is just like radio-quality. That’s what inspired me in making the album.

Federico: So this is a pop project.

Mechatok: For sure. The work I’ve put out before was like this too, but it was Benjamin who showed me how to condense it in a two-and-a-half-minute song—straight to the point. In this sense, the project is super “pop,” I guess. But to be honest, in some moments like “Intro” or “Grace,” it moves to different trajectories. In the end, we did not make a conceptual record—in the sense of sit-down-and-listen sort of vibe. And that’s okay. It felt important to make an honest record.

Federico: Is this your hyper-version of pop?

Mechatok: You could maybe say that. We weren’t trying to emulate any other version of it.

Bladee: It wasn’t our goal either, it just came out like that. But, to be honest, when someone asks me what kind of music I make, I just say pop. That’s such a broad term and I don’t really fit into one specific genre. So, just pop.

Federico: What’s up with the coin—which is on the cover and also exists as a physical, limited-edition object?

Mechatok: As I said, we were talking about stripping down the songs to the minimum extent, so we tried to strip down the concept of luck too. In this case, the coin, and its two sides, was the essence of luck.

Federico: Well you’ve flipped the coin, really! And it seems the risk paid off?

Bladee: It was a lot of work, but I think it paid off. We were working with a lot of people, which is like something we don’t normally do. So, to be able to keep your integrity and your original idea, while negotiating it with multiple layers and other people working with you, was really hard. But I think we learned a lot in the process, and in the end it came out well.

Mechatok: Yeah. Now there’s definitely the ambition to go live in some way.

Bladee: Now the songs have some time to resonate with people. And then we’ll think about shows—that will be epic!

Federico: Any afterthought after the album came out? Can you still listen to it?

Bladee: Not quite yet! [laughs]

Mechatok: I don’t know, I might be able to play a song again in a little while. After all, we have religiously listened to it for a whole year.

Bladee: Personally, I think Good Luck did what we wanted it to do, and I feel people are enjoying listening to it. So, that’s it! Now it’s time to move onto the next thing. We’ve spent so much time on this project and I feel we’re happy to move on from it. On the other hand, I feel like the songs can keep going on their own. They’ll be good in a year from now, you know, and will always work—a hit is something you can go back to.