‘Throw away these phones, get a bit more holy’: The London-based artist’s forthcoming album is a call to raise your vibration

The name Greentea Peng rolls off the tongue the way honey melts into a hot pot of tea, bringing to mind the comfort of a fresh cup while keeping things a little cheeky (‘peng’ is British slang for anything sexy or delicious). This expression of down-to-earth warmth reflects the territory Greentea charts in her psychedelic R&B—exploring issues of both the everyday and the existential through rich, soul-soothing vocals and mellow, resonant beats.

Raised in South London, the 27-year-old singer-songwriter grew up surrounded by music, taking an interest in classic punk at a young age after her stepfather introduced her to bands like The Clash and Sex Pistols. While her sultry, slow-burning tracks don’t sound much like the distorted riffs of her youth, Greentea keeps the spirit of punk defiance alive in lyrics that ask us to think critically about the systems and structures that shape our lives. Her meditations range from political calls to action, as she laments the gentrification of London on “Ghost Town,” to advice that’s as practical as it is philosophical, urging us to “throw away these phones, get a bit more holy,” as she sings on “Hu Man.”

Though often labeled ‘spiritual,’ Greentea is anything but your typical peace-and-love emissary—she isn’t afraid to get pitch-dark in her songwriting. On “Downers,” her 2019 breakthrough single, Greentea plunges into the experience of losing herself in depressants. This straight-to-the-heart honesty is emblematic of her intimate relationship to music-making, which she describes as “a key part in [her] healing process as a human being.”

True to form, Greentea spent this past summer in the studio turning her reflections on the “fuckeries [of] this year” into her first full-length record (out next year). She describes the forthcoming album,  still title-less, as a product of its time—a “transmutation of rage, pain, [and] apathy over [2020].” Sonically, [the album] represents a new chapter for Greentea, who worked with a live band throughout the entire recording process for the first time. She also chose to record the album in 432 Hz frequency, a pitch that falls a semitone below music industry standard and is thought to vibrate healing energy. Though it touches on subjects of rage, Greentea’s intentions for her debut record are firmly in line with the enduring mission behind her music—to penetrate hearts and to heal.

Greentea Peng joins Document to discuss the therapeutic power of music making, what spirituality means in 2020, and how her forthcoming album is “technically out of tune with the industry, but in tune with the universe.” 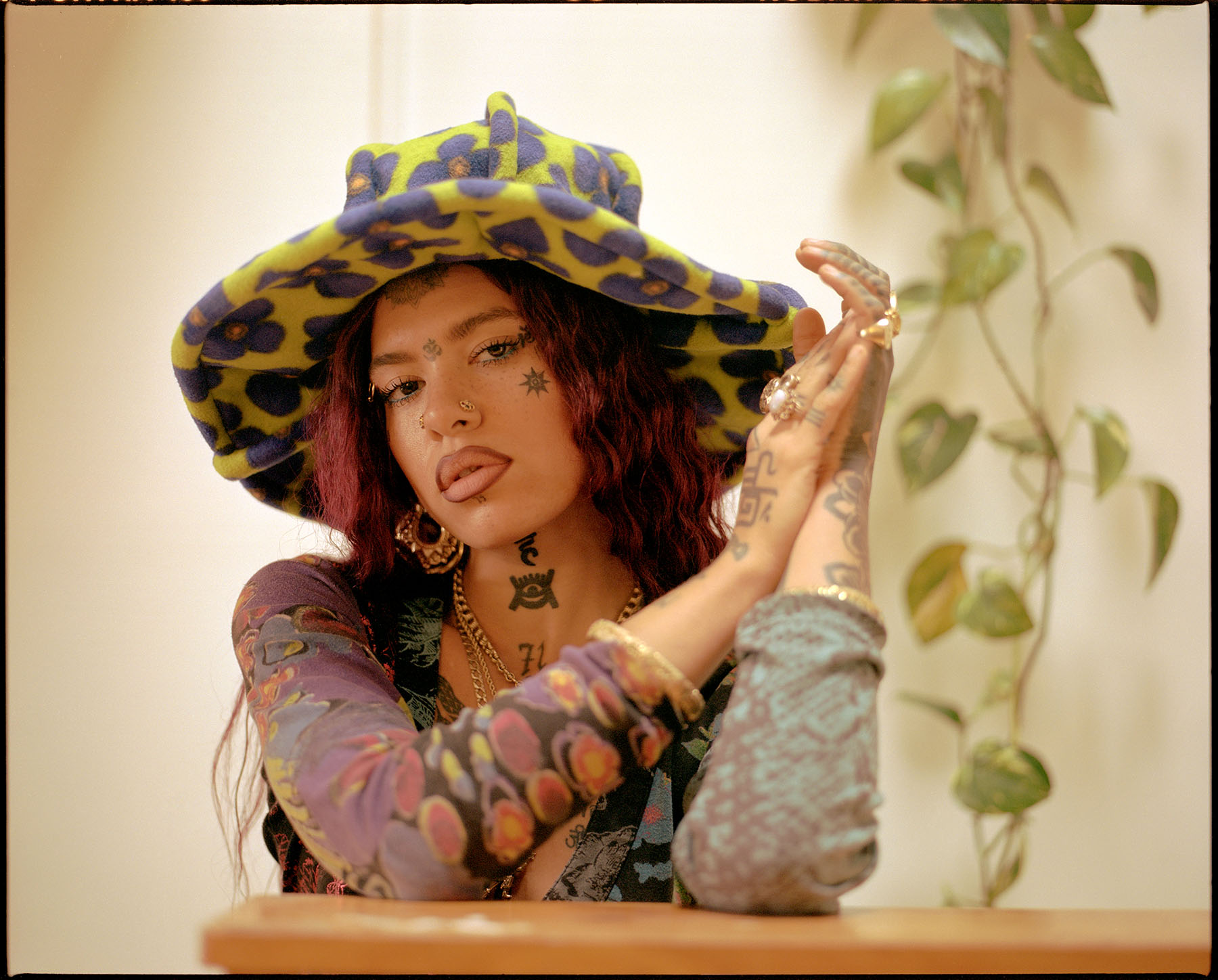 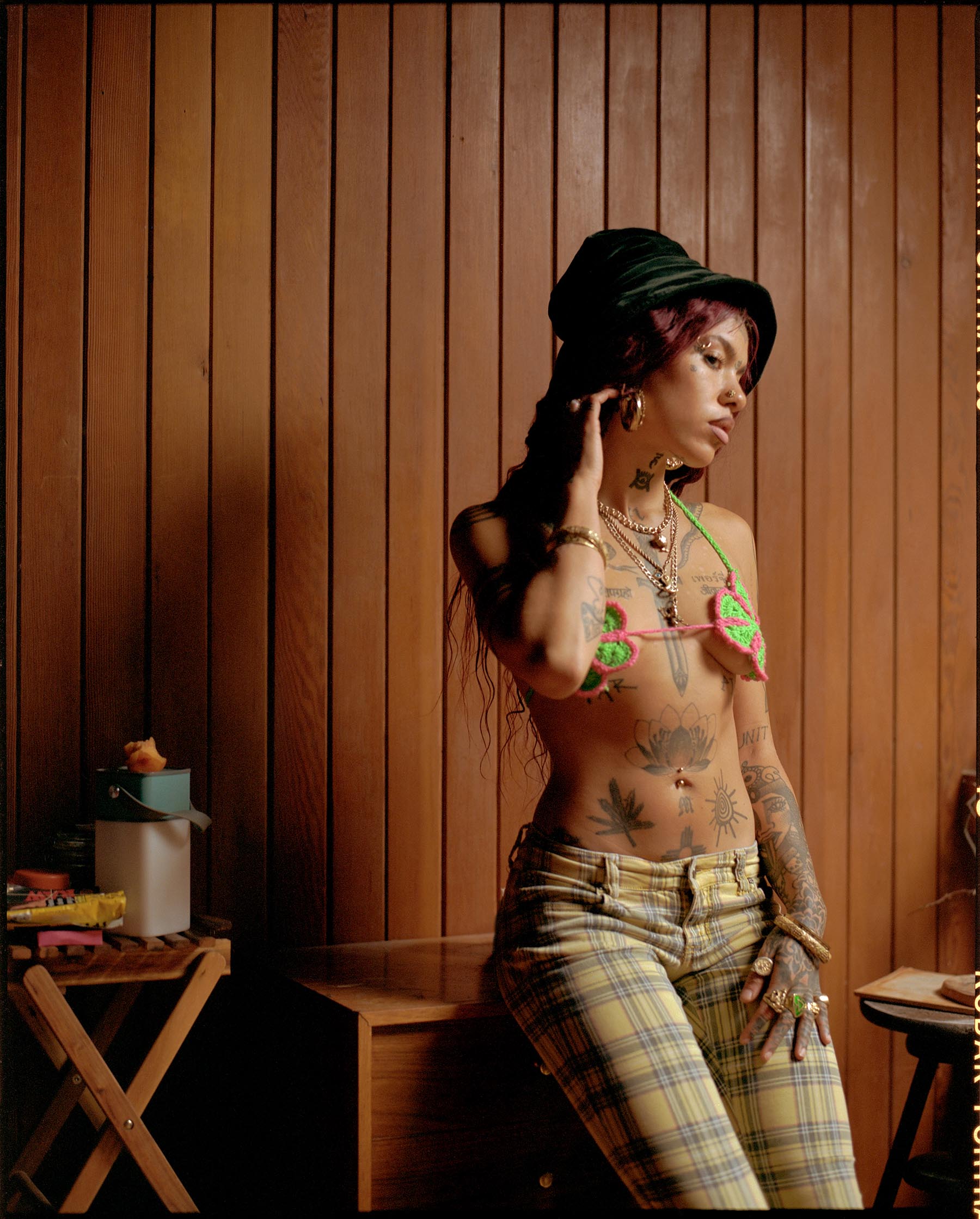 Biz Sherbert: What was the process of recording your debut album like?

Greentea Peng: It was amazing. It was mad. It was quite an emotional time. I’d just lost my stepfather a month before. I’d planned to get all zen before and do yoga everyday [to] operate at my higher self in preparation for [recording the album]. Instead, my stepdad died and I was in quite a mad headspace. But the show had to go on and I knew my stepdad would have wanted me to carry on making the album. It was emotional and the music came out very different [than] what I expected. The album is very much a product of the fuckeries that have been going on this year. It’s very speculative on the current state of the world.

My friend’s got a mad house in the woods in England and we stayed there for over a month [to record the album]. We got super trippy, set the house up as a studio, and [made] music every day. Before we went out there, I was toying with the idea of doing the album in 432 frequency, which was presenting a lot of obstacles. It was the first time we [recorded] with live instruments straight from the beginning.

“[Spirituality] is painful. It’s dark at times and it’s very personal. When I’m on stage and when I’m singing, that’s my meditation—not sitting silent. My meditation is screaming and chanting.”

Biz: People talk about how much they admire the energy you put out, whether in a music video or a live performance. I know you’re hesitant to use the word ‘spiritual,’ but how do you get into that headspace when you’re recording or performing?

Greentea: I just express myself and don’t really think about it. I have my own understanding of spirituality, of God, and [of] the idea that something isn’t necessarily a gift unless you’re sharing it.  When I’m on stage, it’s very free and maybe that’s what people are referring to, because we live in a day and age where we’re very repressed and oppressed. Of course we’re all going to be attracted to that freedom because we’re sovereign human beings who are meant to be free.

I’m hesitant to use the word ‘spiritual’ because, in some cases, spirituality is becoming a bit of a trend. I’m not really here for that, because [spirituality] is painful. It’s dark at times and it’s very personal. When I’m on stage and when I’m singing, that’s my meditation—not sitting silent. My meditation is screaming and chanting. But I don’t like to just be like, ‘Oh, yeah it’s spiritual,’ because I’m not here to encourage a shallow perception of [spirituality]. I’m not talking about anything materialistic [in my lyrics] so I get why people say it, but I just try not to make it into a trend. 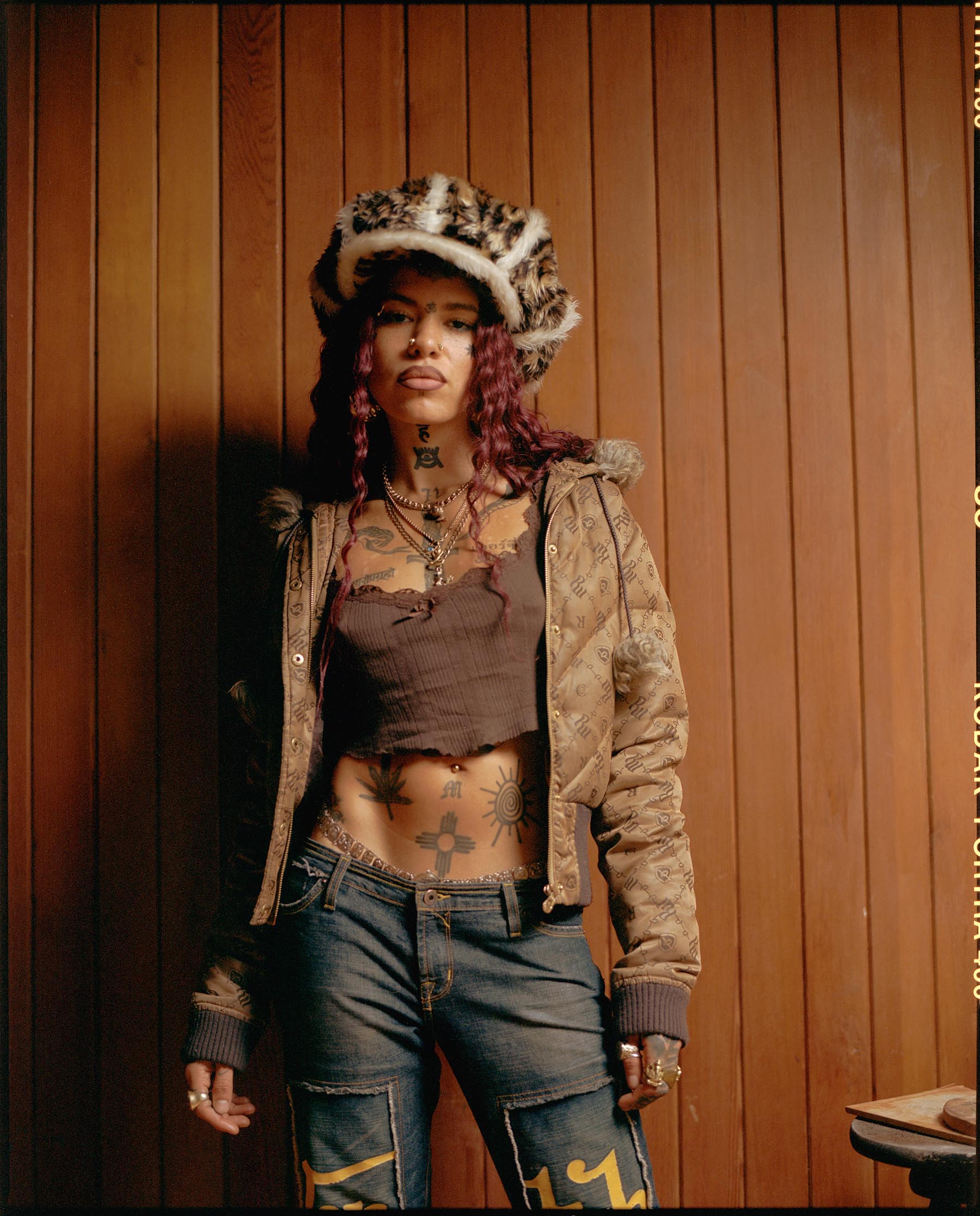 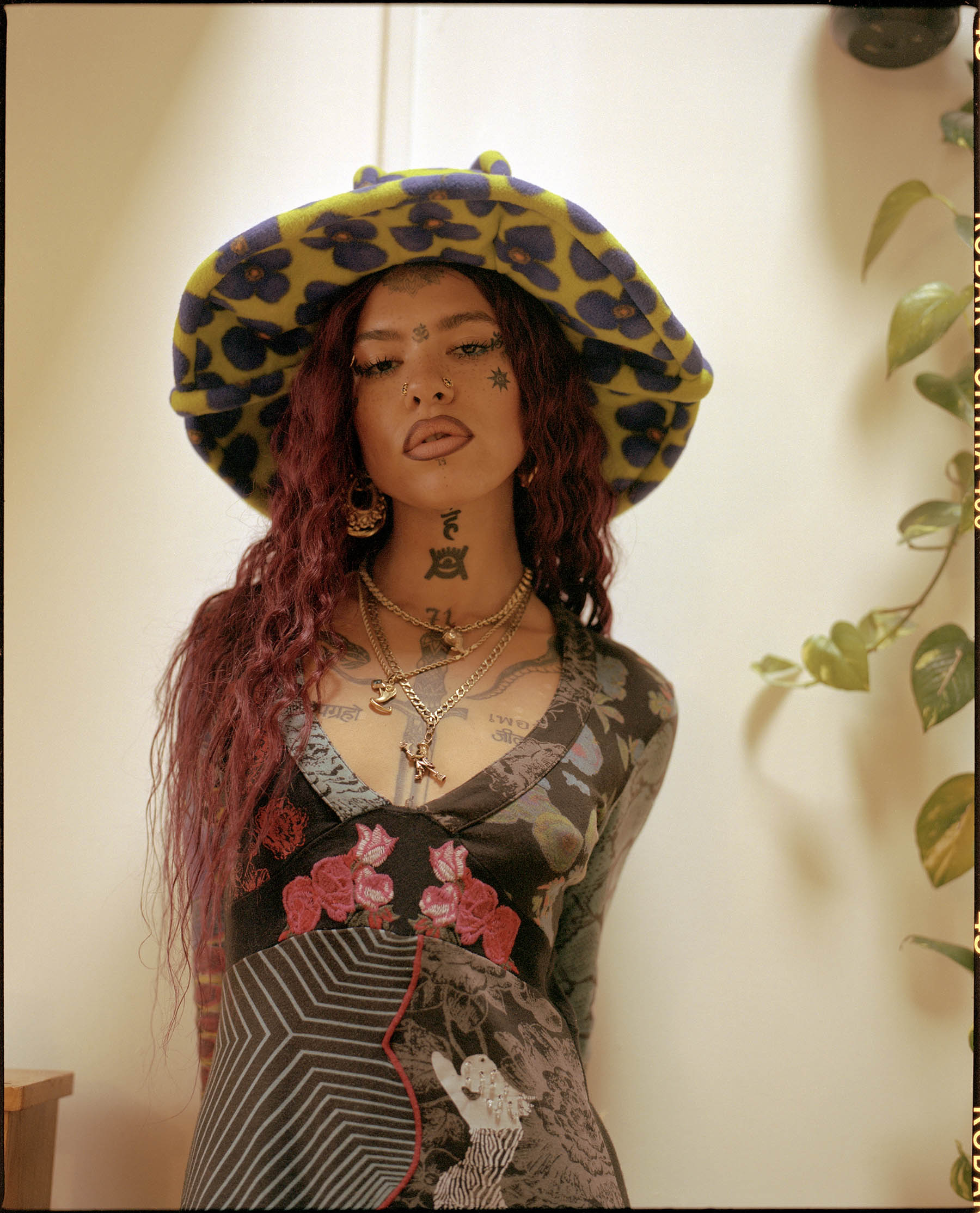 Biz: You’re always advocating for unity in your lyrics. Why is this concept important to you and how does it inform your music?

Greentea: I believe in the people, man. My songs are as much for me as they are for other people. I feel like unity is the one thing people have spoken about but never actually tried. I’m talking about true unity—shedding away all sense of identity. Completely fuck it off and actually talk about spirit and soul, which is what bonds all of us.

All of these little labels just get in the way and this year has been a prime example of that. We’ve got this whole woke scene. [But] actually, we’re kind of reinforcing barriers and division, we’re just doing it from a different viewpoint. And because we’ve got Instagram, we’re living in echo chambers where everyone agrees with what we’re saying. We’re living in an age where no one even wants to talk to each other unless you’ve got the exact same thoughts, processes, and beliefs. That’s just ridiculous because all of these things aren’t even real and once you realize that, all of it is kind of jarring, even the woke shit. Because it’s like, actually, ‘You’re not woke. None of us are,’ which is why we’re here going through this shit. We’re all in the same boat.

Biz: You also bring attention to the harmful effects of gentrification on community in some of your lyrics.

Greentea: Living in London, it’s easy just calling it ‘gentrification,’ but actually on a deeper level it’s like, ‘Where the fuck are the poor people going?’ I’m a poor person, [and] I hate to even use ‘poor’ and ‘rich,’ but I grew up working class, as we call it in England. It pains me to see people pushed out of their communities, and fucking buildings being built that don’t serve the community—they’re serving people that are coming in to spend money [and] raising prices for said community. It’s not just England, it’s fucking everywhere. I [saw] it when I lived in Mexico and I see it where my mom lives in Hastings [in East Sussex]. If I’ve got a platform and a voice I might as well say the shit I wanna say. 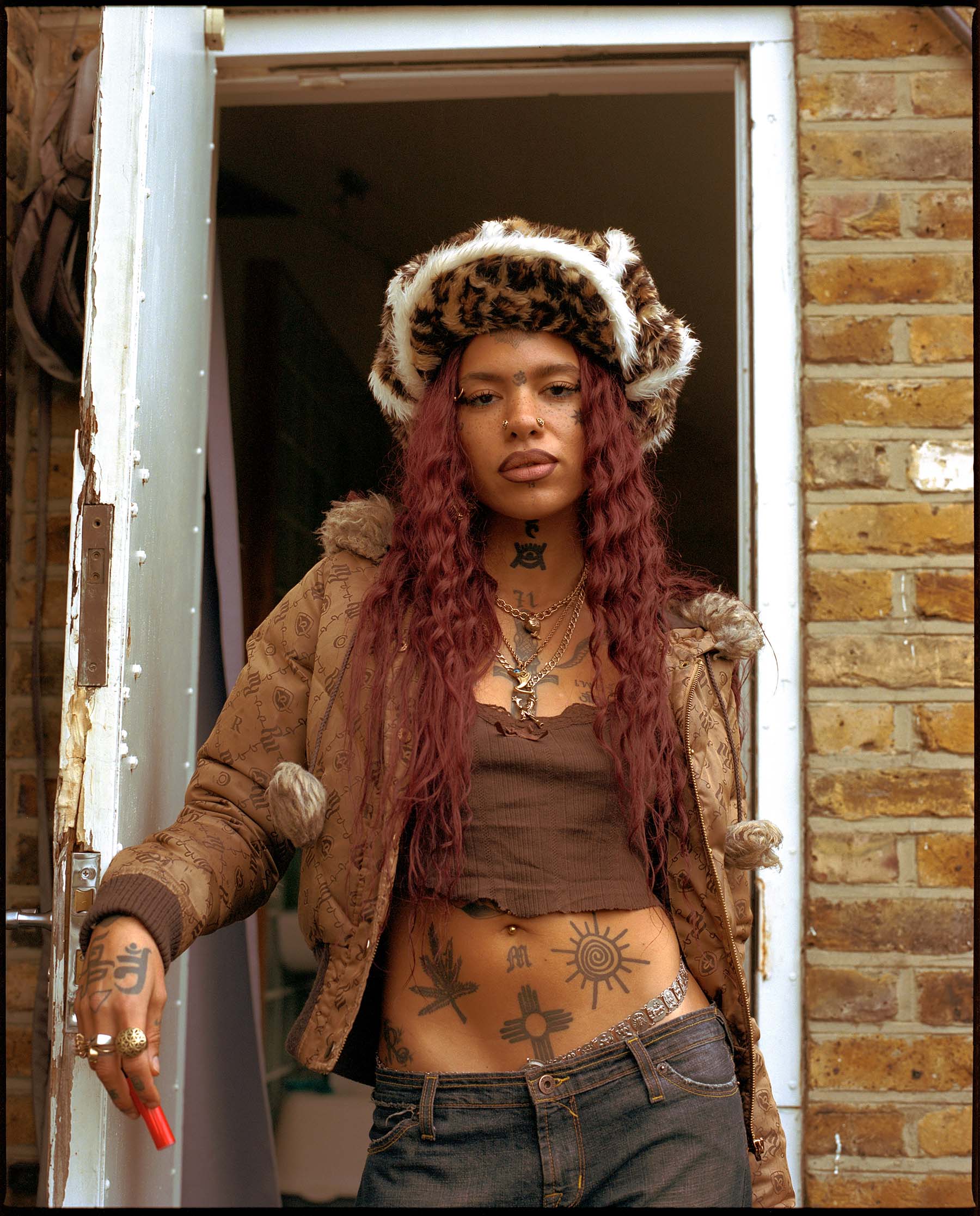 Biz: I read that your name Greentea Peng started from a project where you were documenting your travels and your experiences on Tumblr.

Greentea: That’s not where I got the name from, but that’s what I first started using [it] for. I was writing little articles and shit and signing [them] Greentea Peng.

Biz: That was super relatable to me as someone who grew up on Tumblr, as I feel like a lot of people our age did. What role did the internet and mediums like Tumblr play in the development of Greentea Peng?

Greentea: I remember when I first made [the Tumblr] public, it was such a big deal. I remember actually kind of shaking, being like, ‘Oh my God, I’m posting this and it’s got my writing on it.’ That’s how repressed I was in terms of pure expression. I was a very pent-up person. I was so highly strung. It’s quite interesting to see how far I’ve come in a few years.

“If I leave people with any impression, I [want it to be] love, honesty, believing in yourself and raising the fucking vibration.”

Greentea: One hundred percent, I [still] love listening to my bands. I say ‘punk’ lightly, I mean all type[s] of rock ‘n’ roll. As a teenager there was a point where I only listened to Stiff Little Fingers and Sex Pistols. Now, as I get older, I understand it’s good to be balanced in everything. When I was younger I was quite extreme, I was like, ‘No, I only listen to rock music,’ ‘No, I only listen to ‘90s hip hop.’ Especially The Clash, man, big influence. [My stepdad] was predominantly the [person] who taught me about music, rock music especially. Making the album so soon after he died, there’s definitely a lot more rock ‘n’ roll influences on the album.

Biz: What impact do you want your music to have?

Greentea: What I said to myself in the beginning is that I’m always going to be one hundred percent honest [as an artist]. Now, I feel like it’s my duty to remain that. [For me], it’s not a career—obviously it’s turned into that, but [making music] was my healing. I can’t exaggerate that enough. It sounds cliché but it’s sacred. That doesn’t mean that all my songs are going to be about peace and love. Sometimes I get angry and that’s why I’m careful with the spiritual thing—it’s not necessarily spiritual to be burning down Babylon in your songs. If I was just some proper spiritual person, I’d just be singing about love, but at the same time, I’m in this material world too. If I leave people with any impression, I [want it to be] love, honesty, believing in yourself and raising the fucking vibration.