French musician Oklou embodies many states of mind on ‘Galore’

Since my first memories, I have been reflecting my emotions through music. Music and musicians are a big part of both my personal life and my work. I’ve always been drawn to artists who are able to put their emotions on display with their lyrics, sound, and image. Oklou, or Lou, as we call her, achieves this combination perfectly.

We first met a little over a year ago. As is usual in the beginning of any relationship, we were both a bit shy and cautious, but also really curious to learn about each other. We started to exchange our inspirations in the form of art, landscapes, and fashion, and we quickly fell into a synergetic flow to create the world of her debut mixtape, Galore, together.

The introspective trip that is Galore reminds me a bit of journeying through my 20s. In astrology, they call this particular stretch of time the “Saturn return;” a period when our minds react with new questions, new ideas of what we should be doing and feeling and how we choose to define ourselves. For women in particular, this moment coincides with our physical bodies saying it’s time for babies and modern society saying we need to work more and find success. Galore touches on this process of a person trying to find answers amidst the noise.

As Lou says about this phase of life, “I imagine myself as someone else and then I find my true self.” It’s as if you can leave your body and look at yourself from a distance to understand what you are looking at. Like recognizing elements of yourself in others. It’s an ongoing journey, these questions never abandon you, but eventually you start to accept who you are and who you are becoming.

In creating the videos, artwork, and performances for Galore, Lou and I told this story together through clothing, with the help of some of our favorite brands like Vitelli, Paco Rabanne, and Sevali. Natural fabrics, romantic silhouettes, and utilitarian layers helped Lou embody the many states of mind explored on Galore. The character behind ‘unearth me’ was a kind of Lara Croft-style warrior running in nature, so we played a lot with the idea of uncovering as all this protective gear comes off throughout the video, while for ‘god’s chariots’ we brought in pieces that resembled sleepwear to create what Lou calls “a complete world of illusions and imagination, disconnected from real life.”

On a grey day in November, a few months after the release of the mixtape, Lou and I met up again in Paris to catch up and reflect on the process. 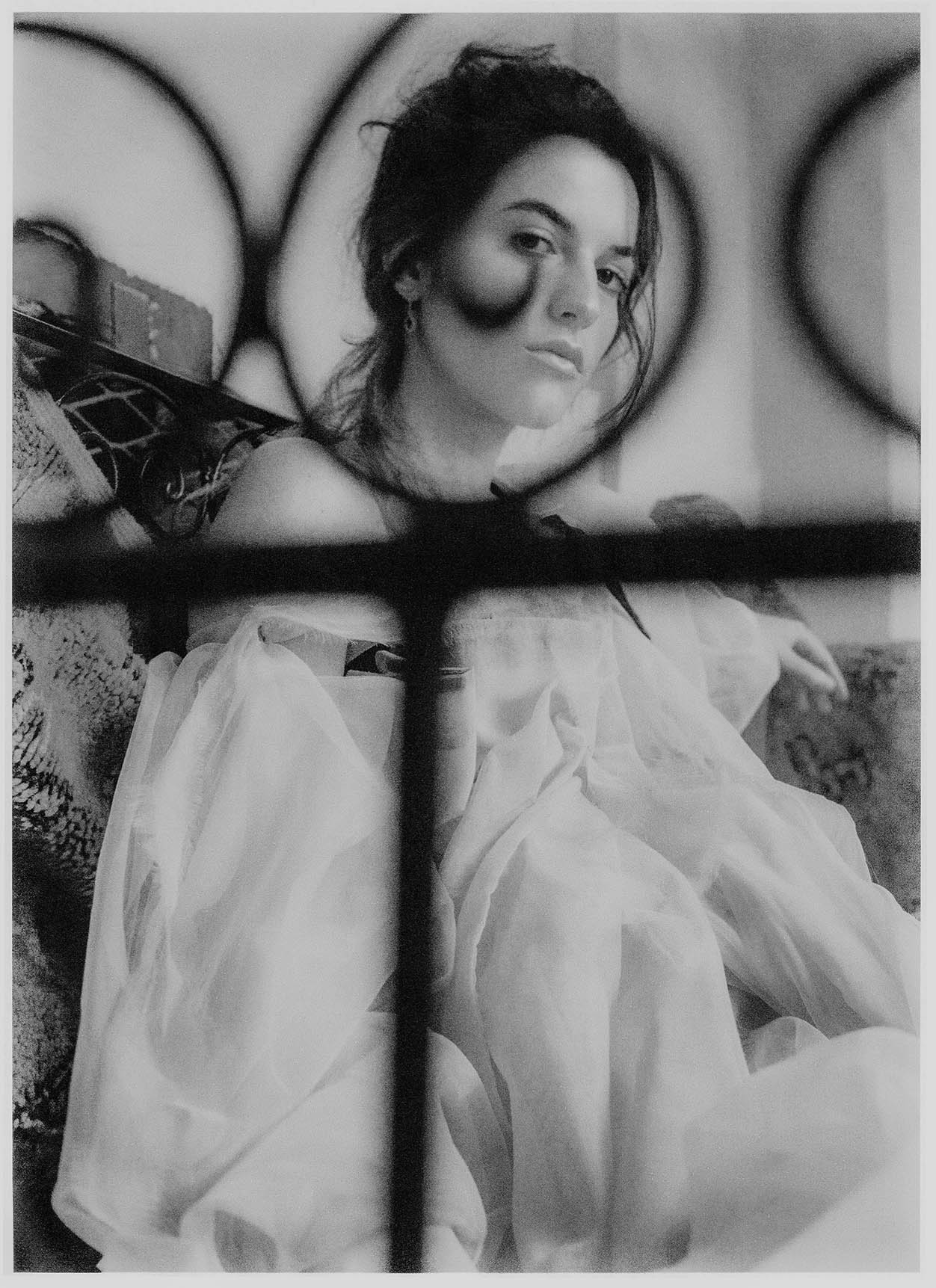 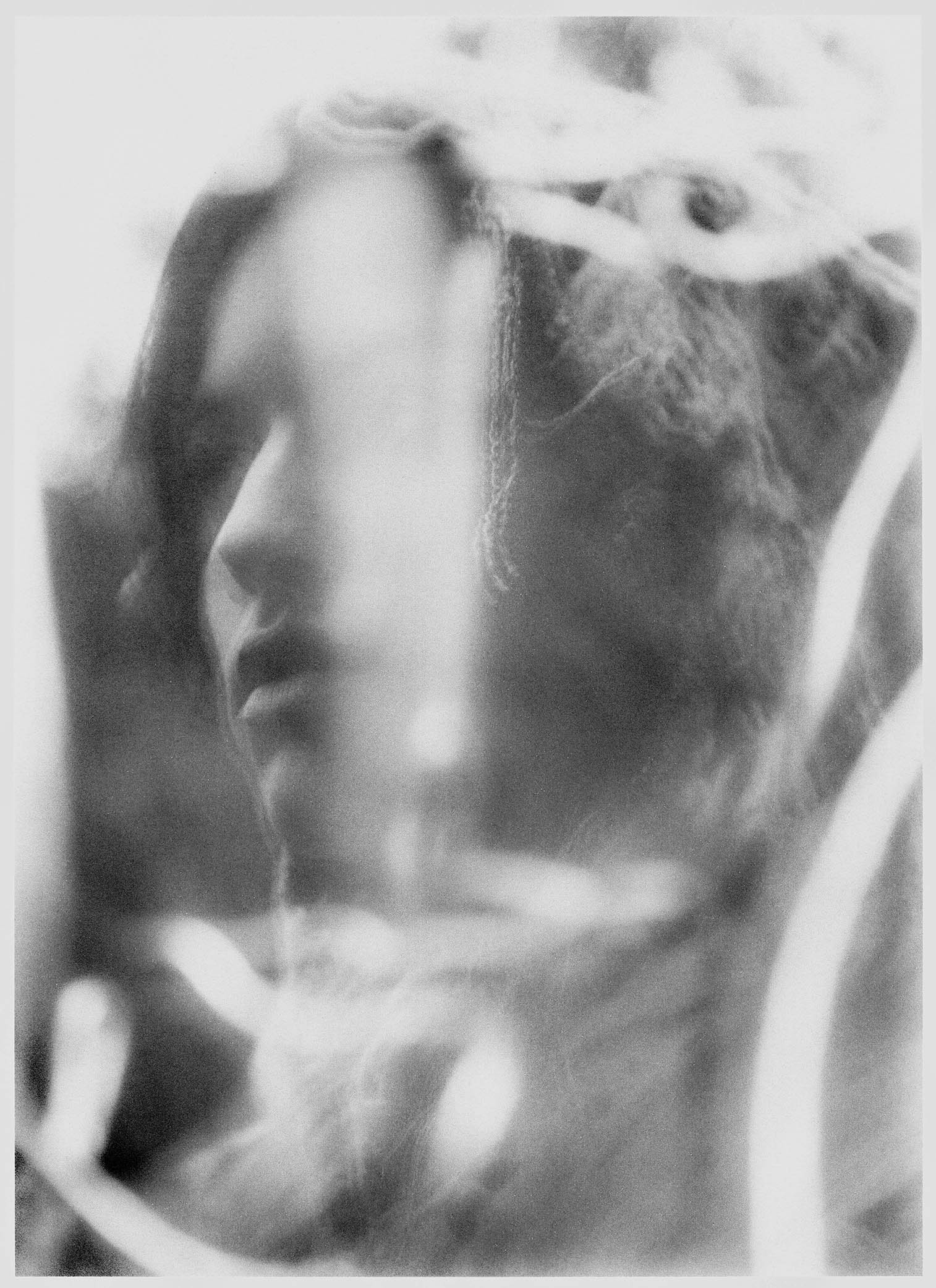 Tati Cotliar: Let’s start by talking about the inspiration for the style behind Galore. Throughout each phase of the mixtape’s visual production, you’ve embodied a different character in a different world. How did all these characters come about?

Oklou: It’s completely connected to the story I’m telling, which is about reconnecting with myself by escaping reality. It’s a bit contradictory, but that’s because I’m looking for answers. I go through these phases, where I imagine myself as someone else, and at the end of the journey, I find my true self. That’s the story I’m telling in Galore as well as in the videos. In the most recent video for ‘I didn’t give up on you,’ the last still on screen is me in my most natural state. Prior to Galore, I never had the opportunity to work with people like you, who could help build a real, visual universe. So I wanted to have fun, and take advantage of the narrative of Galore, to explore different possibilities surrounding these characters.

Tati: The idea of fantasy was one of the first things that you mentioned to me when we talked about the ‘god’s chariots’ video. From there, we brought in a lot of renaissance and medieval sort of epoch dresses and fabrics, mixed with dreamy pieces. We used a designer called Sevali. I really like what he does, everything is upcycled, so he takes a lot of different pre-existing garments, and he makes new ones out of these garments. We chose a pajama style-outfit, with an element of couture, and added a big coat that looked like a duvet cover. We also worked with pieces from Marine Serre, another designer that you really like. The garment of hers that we chose was a dress but it also resembles delicate sleepwear.

Lou: I was also attached to the idea of a princess and the concept of a fairy-like creature.

Tati: Yes, ‘fairy’ is a really good word. For the mixtape press shots, we explored yet another character, which is the shepherd’s world. This was also something that you mentioned from the very beginning. You said this thing about the shepherd and you said it in French, and I didn’t know what it was…I remember asking you, like, ‘What was that word? La berger?’

Lou: Yeah. In France, we have an expression, étoile de berger. The literal translation is ‘the star of the shepherd,’ and it’s actually Venus. For a long time, this star was a guide that the shepherd used to recognize north, south, east, and west. Even more, the shepherd’s role is a guide for animals. I loved this idea of looking for guidance, because that’s really what I needed when I was writing the mixtape. I felt very lost and very lonely. Picturing this shepherd alone in the fields with their sheep, it ended up being the perfect figure to draw on.

The shepherd idea came initially when I was writing the song ‘nightime.’ I was at home with a blanket over my head and was feeling very sad. I was imagining myself being in a cabin in the mountains. And with that blanket on my head, I had this image that I looked like a shepherd. I thought that was beautiful and I ended up holding onto that image while writing the rest of the mixtape. There’s an Instagram account I really like called organiclab.zip, so I’d been saving these kinds of images even before I was writing. Then I started writing and my visual ideas became more clear, more connected to the story I was telling in Galore. I guess when you play with electronic and synthetic sounds, it’s interesting to dive into the natural aesthetic. I think the connection between technology and natural elements is beautiful. 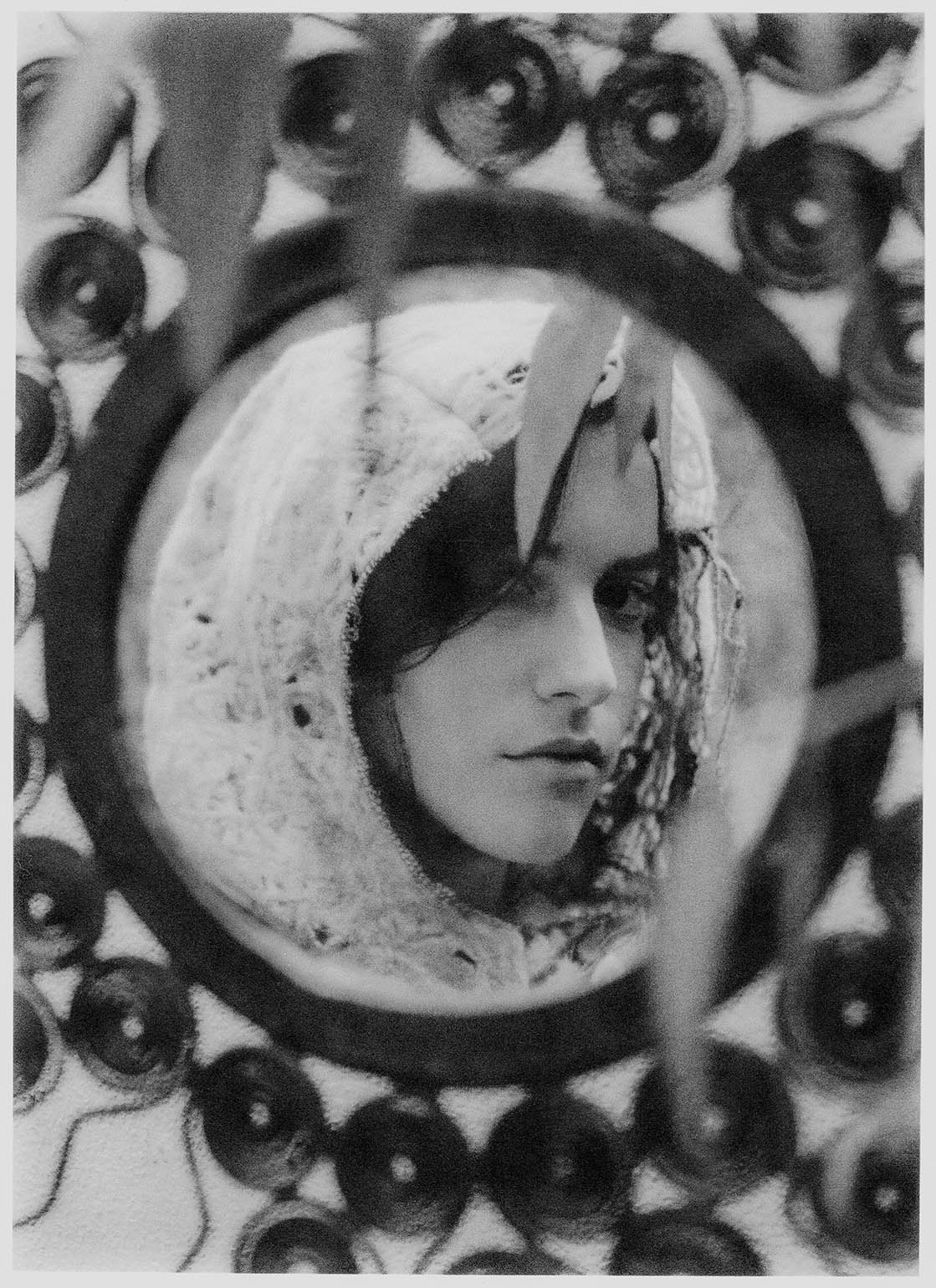 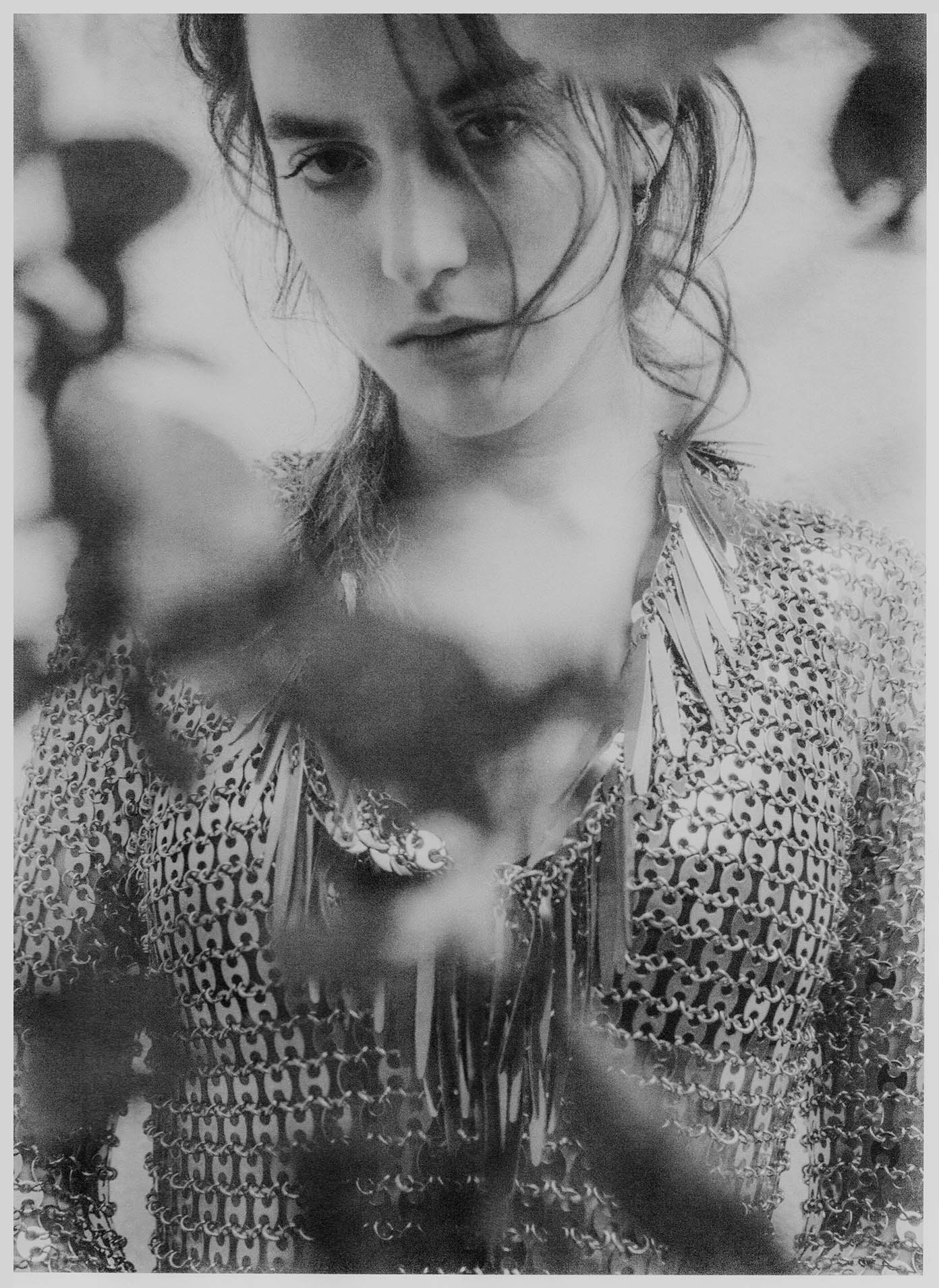 Tati: From our conversations I immediately thought of Vitelli, an Italian knitwear brand where each piece is unique and sustainable. I thought they were perfect for you because the clothes are made from natural fibers in these earthy tones resembling the forest and camouflage.

Lou: When you look at some Vitelli pieces, it already looks like shepherd’s cosplay, so it felt like we almost had the same references. I really enjoyed discovering that brand.

Tati: With the videos it ended up being a really nice mix with that shepherd character but also a bit of warrior princess and survival. The first question is always what’s the character going to be like? And are we representing someone from each of these worlds that we discussed? Then we try to adapt the clothes to each occasion, whether it’s a performance, presentation, or photoshoot.

Lou: If I’m on stage, the priority is that I physically feel comfortable. But when you do a photoshoot, the number one criteria is to look stunning. So, you know, it varies. And it’s good to have this contrast, different challenges depending on what you have to do. That permits us to explore lots of different ideas with the clothes.

Tati: Yeah. I think it’s also important, when you’re performing, that the clothes enhance the whole feeling that the audience is going to have along with the music. Movement is essential, and so is making the movement beautiful. When you did the recent piano session for Trax Magazine, we chose that look from Ottolinger that would allow you to play the piano, but it was also very sexy.

Lou: It’s funny with that one. I usually try to be very spontaneous when I talk to you about how I feel in the moment, but I knew, for this piano performance, I wanted to wear something more sexy. I thought it was a cool thing to do while playing a piano because, you know, usually in the classical universe, the woman on the piano is everything but sexy. They are typically dressed up in a very classic, polite manner.

Lou: Yeah, and when they are not dressed in this traditional sense and the image is expressive, feminine, and showing more skin, then they are criticized. That’s why I wanted to look sexier and more free.

Tati: I also remember you saying that you really like the designs of Claire Barrow, who was part of our first shoot together for the ‘Forever’ music video. We shot in this house that felt like Beauty and the Beast and you put on different T-shirts made by Claire, and another one that you painted. I would say it was like a children’s tale. 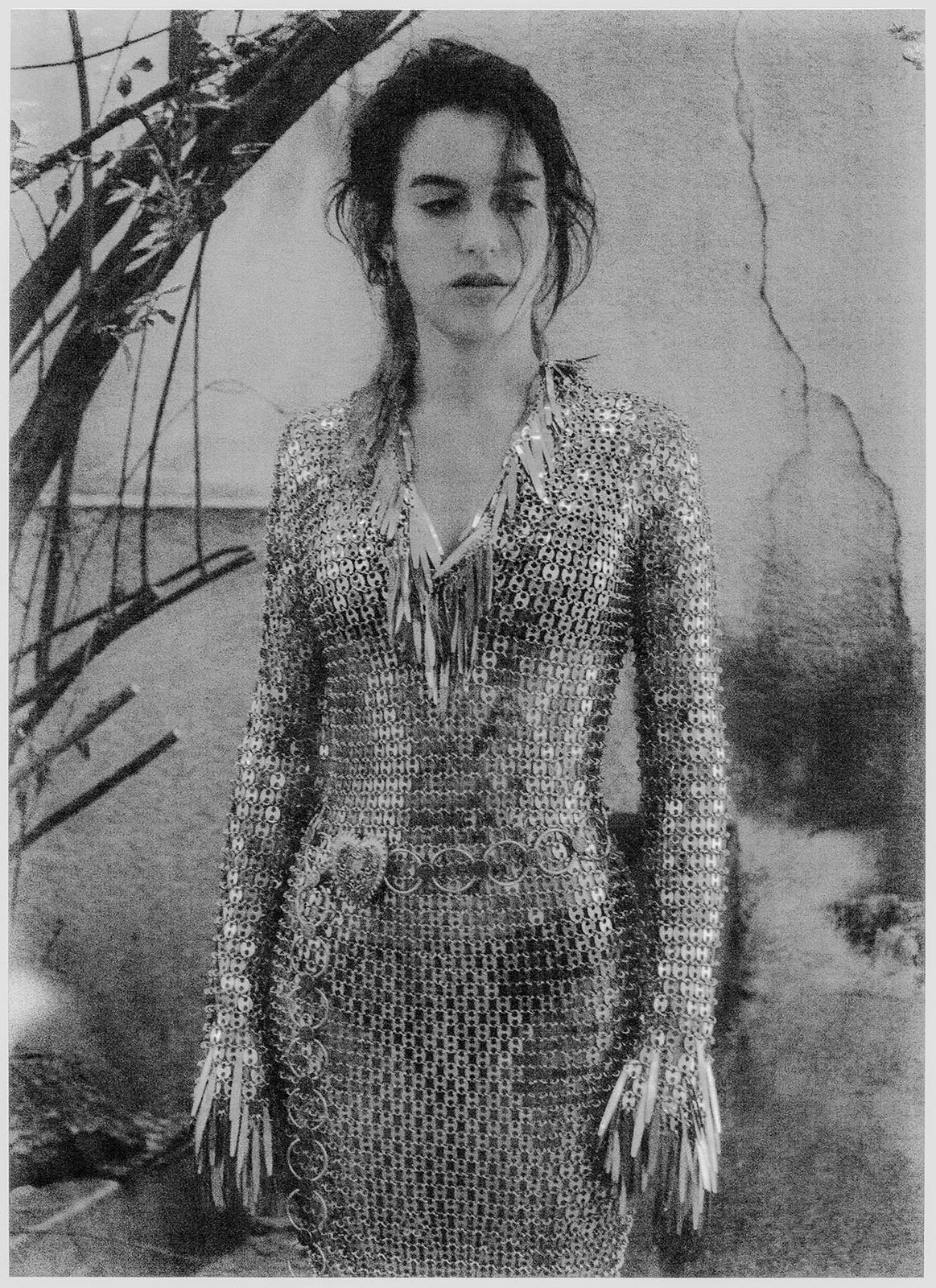 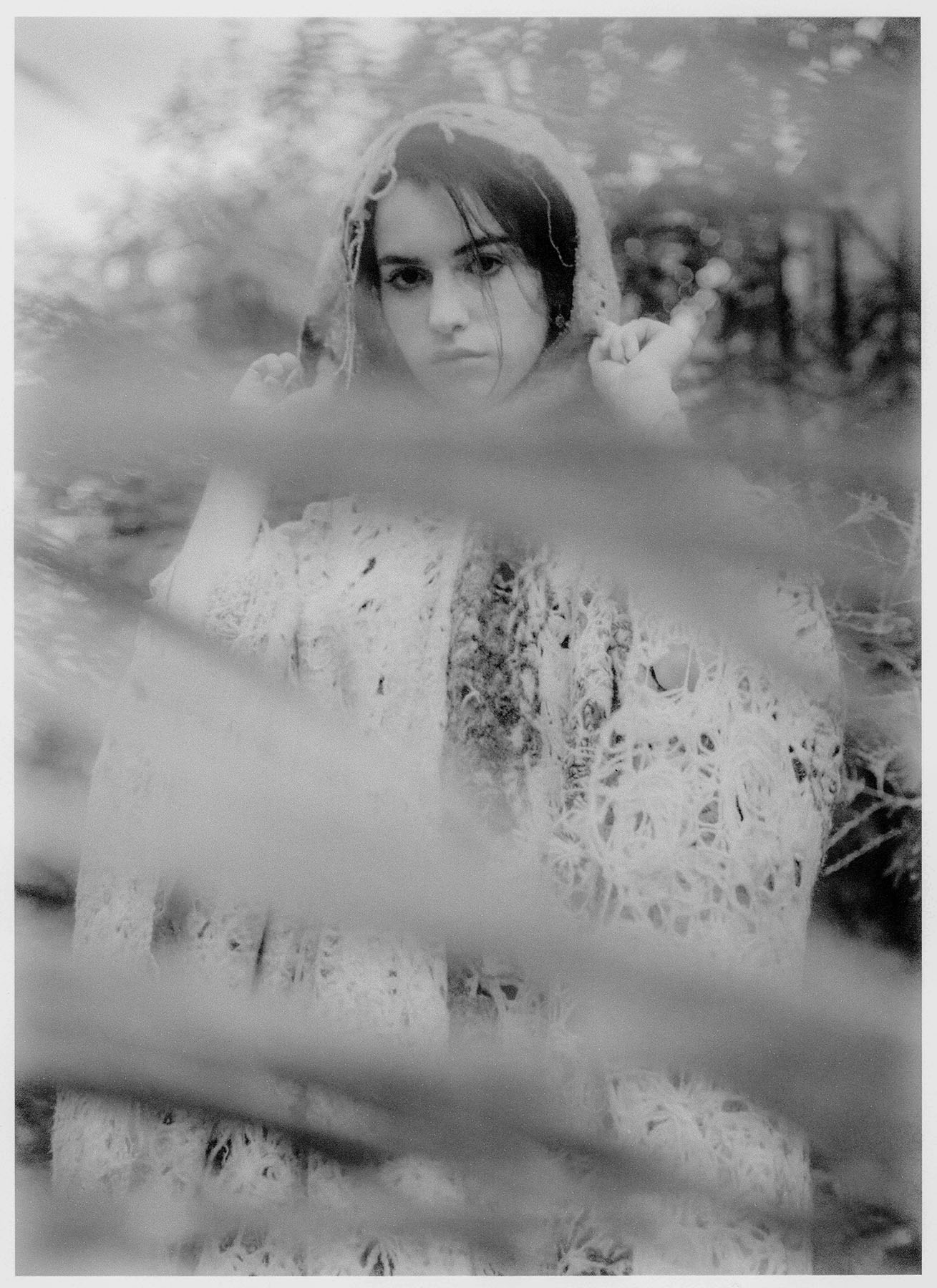 Lou: I’m very attracted to the children’s universe. That’s why I love animated movies. I love grand tales. You can connect to your inner child and refer to the stories as an adult. I also love to work with a lullaby sort of energy. I love that sort of vulnerability and naïveté.

Tati: A kind of innocence. Has our working together changed your relationship with fashion?

Lou: I don’t think the goal of working with a stylist is to change the relationship I already have with fashion, but I love learning about new designers and seeing the process. Sometimes I like thinking about my clothes and sometimes I don’t, it’s a relationship I have with myself as Marylou and not Oklou. But since I met you, everything I do for Oklou and for Galore feels very precious because I’m learning so many technical, functional things about fashion.

Tati: I also want to add that you’re very brave to put yourself in certain garments. For example, we used a Paco Rabanne dress for this Document Journal shoot that was very extreme. It was quite medieval but the tail was about two meters long. I love that you’re open to play around with these characters.

Lou: Before I had a team, when I was alone in the Oklou project, I wasn’t being adventurous with my style or my appearance because I don’t think I trusted myself enough to have the capacity to do something great. I would have rather gone natural, but I began to feel frustrated when I didn’t have the time nor the experience to challenge my everyday style. [Wearing new styles] allows me to see myself as an artist, in a very different visual dimension, because before that I was really just focused on the music. I’m happy now to be able to express myself also through clothing.

Hair by Chiao Chenet. Make up by Lola Turotte.