UBI, M4A, Radical Love: Brooklyn’s Paperboy Prince is a politician for the people

The rapper and community organizer tells Document about his historic bid for congress, and crusading for NYC's everyday heroes

Finding a politician you can trust is like looking for a unicorn, but I found one right on the border of Bushwick and Bedstuy. Brooklyn’s Paperboy Love Prince is a self-described “wizard-magician, a lover, a renaissance person”—they’re also a community leader, an artist, a fashion icon, a rapper, and an anti-establishment political force. If you voted in New York’s 7th Congressional District this year, you saw their name on your ballot. If you went to a local Black Lives Matter protest, you might have seen them call for defunding the police in a gold-and-red costume and teddy bear shoes. If you live around Myrtle-Broadway, you’ve probably seen them play basketball in a wedding dress—if not, maybe you’ve seen videos of it on Instagram.

Paperboy launched their congressional campaign in 2019, but it really gained momentum in the wake of the Black Lives Matter uprisings this spring. “We took a $20 bill and we did something that has never been done before,” they say. “Really, it was zero dollars, but I say 20 because it sounds better.” They ran as a Democrat but their agenda is very progressive, advocating for Universal Basic Income, Medicare for All, and last but not least, “Spreading Love.” And unlike Party leadership, Paperboy represents their community as both a local activist and as an unapologetic artist. “The faces are changing, the races, the genders, but the way of thinking isn’t,” they say. “The current politicians all think in a very similar way, inside a box.” Paperboy’s message has always been, “Fight the hate with love”—and with social programs focused on community building, they’re walking the talk.

I had the honor to chat with Paperboy about good and bad politics, how to spread love the Brooklyn way, and also a little about basketball. Afterwards we were jumping over rooftops, Bushwick stretching out ahead of us—the elevated train tracks and the jazz-themed McDonald’s the neighborhood’s true landmarks. As the sun was setting over their empire, Paperboy looked like millennial majesty in their pink cape and cow-print jumpsuit. 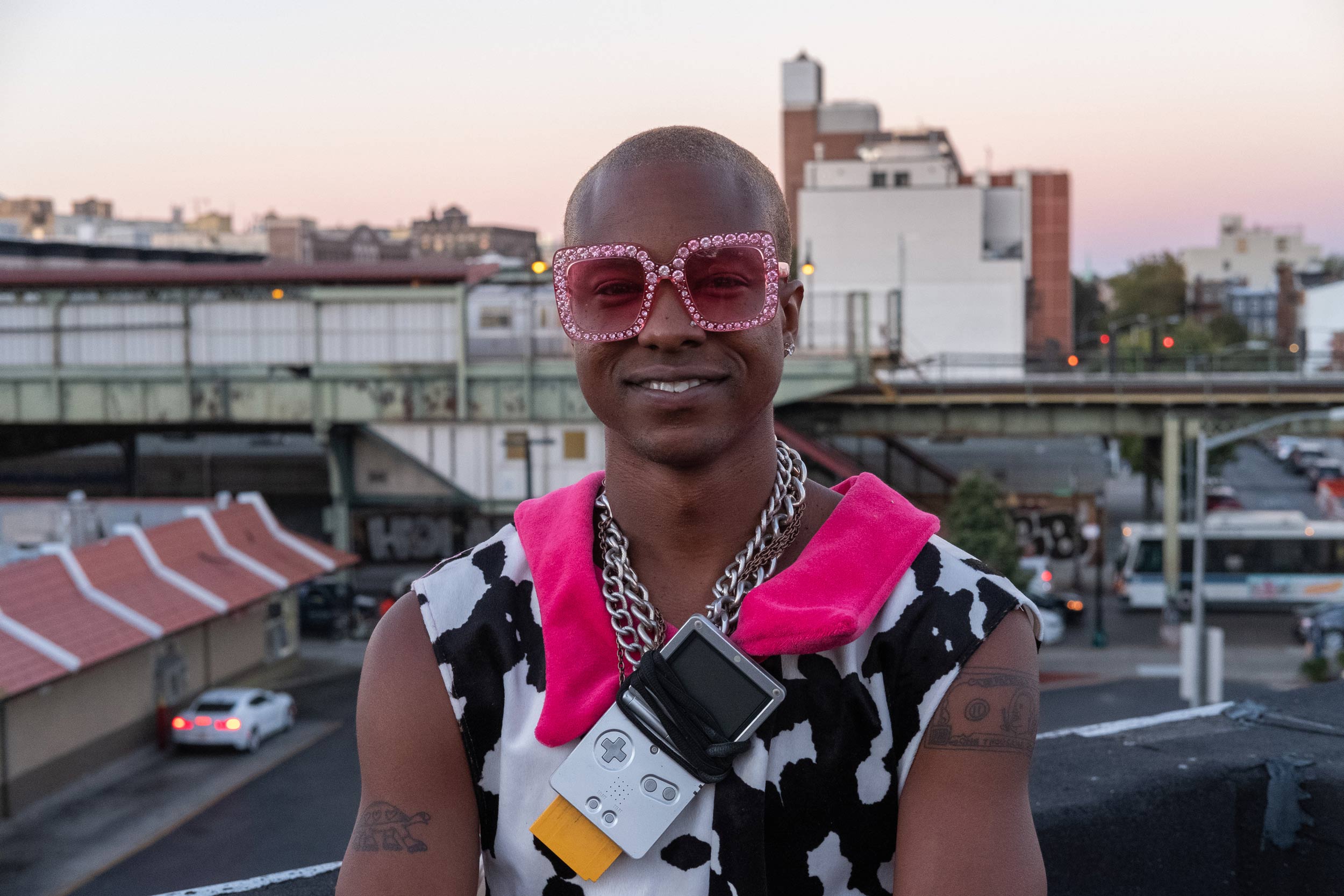 Jill Verhaeghe: You say, ‘Spread love,’ and I add ‘the Brooklyn way,’ because that’s one of your favorite chants during the protests you were organizing after the murder of George Floyd. That’s where I first heard you speak back in May. Now the media attention has weakened and Instagram is basically its shallow self again, how do you see the fight continuing?

Paperboy Prince: For me, it continues with people living their lives in a revolutionary way, meaning: speaking truth to power, calling out things that are wrong and unjust. There’s more than one way to fight for what’s right. Protesting is one way, voting is one way, running for office is one way. These are all small ways but they are all important and achieving the goal. Everyone has to know their role; not everyone is going to lead a protest, not everyone is gonna even be at a protest. Some people’s job is to educate their neighbors, talking to their friends and family, spreading the message that way. Some people’s job is to be on the frontlines and get arrested. The fight continues with everyone educating themselves, learning how to move forward and not getting complacent, just not getting lazy, keeping that energy alive. It’s unrealistic to think that people could protest everyday, it can’t happen. We don’t want that to happen. We want to be able to live a life without needing to protest. Also put your money where your mouth is. Money is power. Investing in businesses and people that align with our values and divesting from corporates, big businesses and politicians that don’t.

Jill: Talking about businesses, I wanted to ask you if there are any small local businesses that you want to give a boost here?

Paperboy: We are soon opening the Love Gallery, an art gallery and community space. It will be a new venture and definitely needs all the support possible because it’s our first time doing something like this. We have been preparing the space for the last weeks and primarily using it to help pass out free food to the people. Head out to 1254 Myrtle ave, right here in Brooklyn! More than any specific businesses I want to shout out industries, because so many are hurting, it almost feels bad to even highlight one over the other. The restaurant industry, the nightlife industry—it’s been hard for a lot of industries that are central to New York.

Jill: One of the things about New York, about Brooklyn, that struck me the most after moving here, was the sense of community. What is it that makes it so strong?

Paperboy: The beauty of the East Coast, with New York as the best version, is that everything is just so close together. The West Coast, the South, the Midwest—there’s still a sense of community there, but here it’s like a college campus. Everyone is on top of each other, everything is close together, a lot of things are walking distance, you use public transportation. We are connected in a different type of way, [while much of] America was set up to be a car place where you need to drive to get somewhere. LA, for example, was really set up for the automobile industry—to keep people in their own little bubbles, away from each other. Here we walk, we take the train, we have to see each other at the deli, and all of that influences how we move. The rising cost of everything makes people have roommates, so now you’re not living alone like in other parts of the country. That is all a part of it. I think New York is a tough place to survive, but because of that it brings you closer to others, to your community. 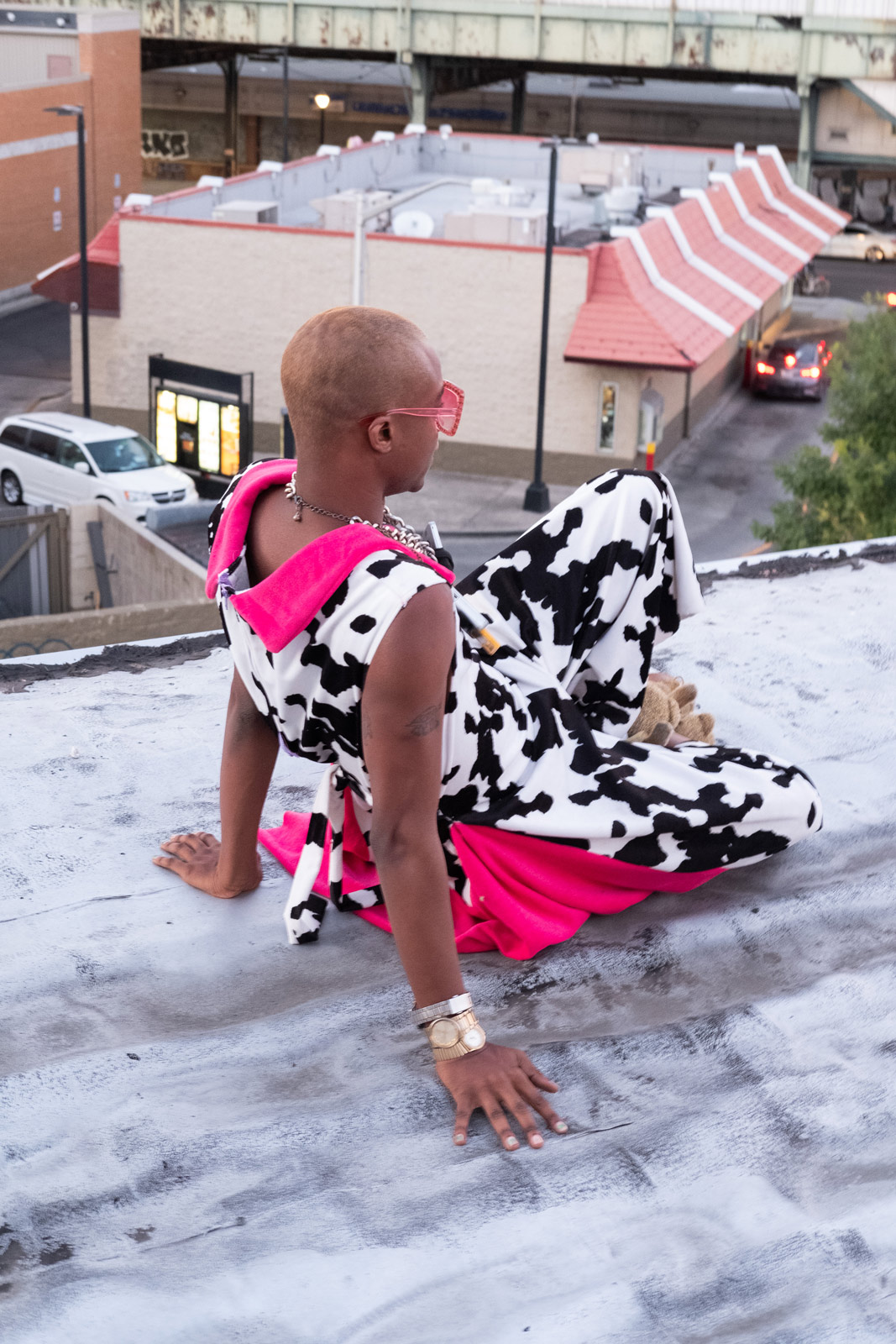 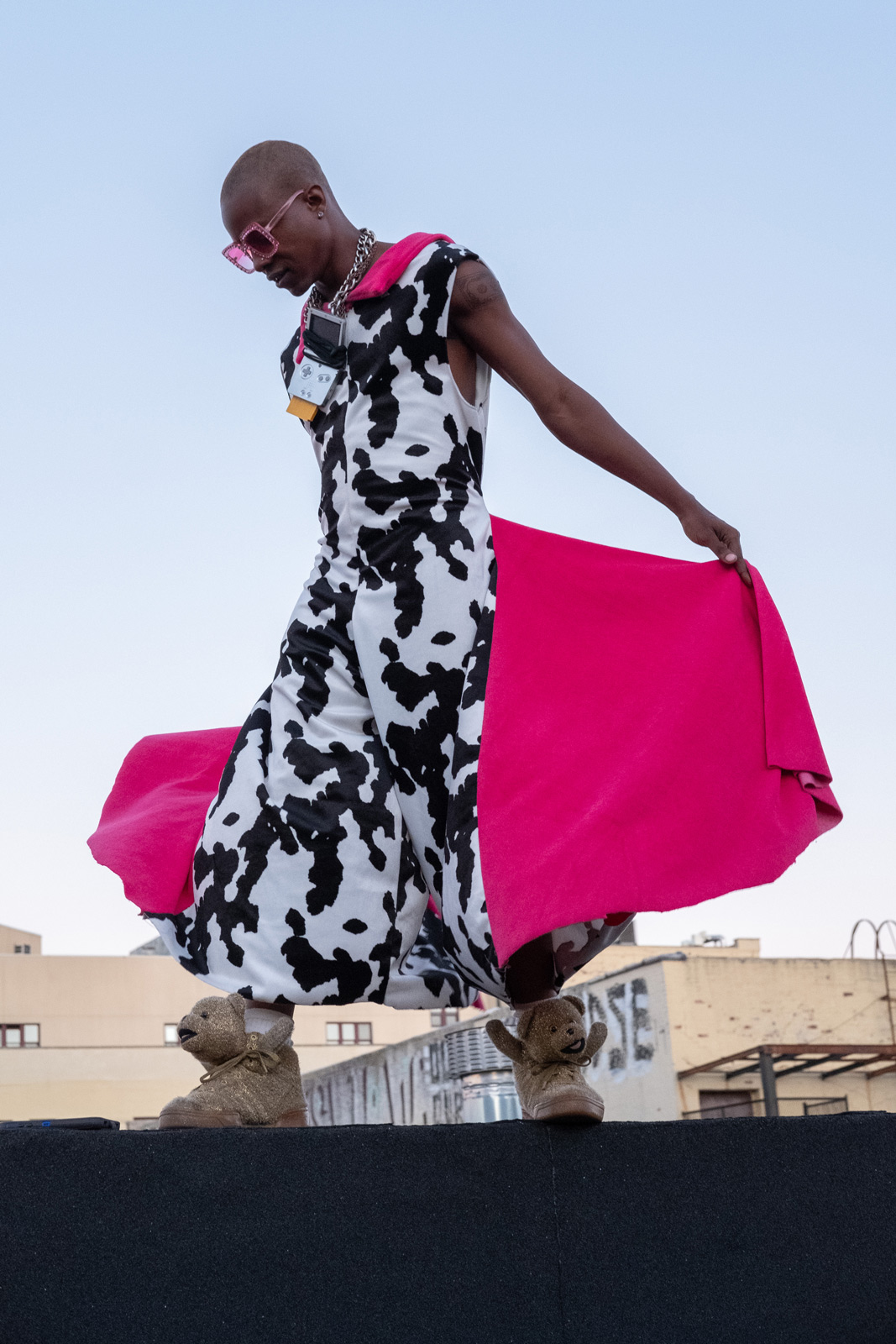 Jill: Here is a question from my roomie, Steele: who are your five best starters from all Knicks history? I will have no idea who any of those men are.

Jill: As a community leader, you constantly meet people that are struggling. Yet you come across as so optimistic and lighthearted. Your videos and music are full of funny punchlines. Is humor your go-to tactic for conveying a serious message?

Paperboy: That’s actually a good question. I like that. In a perfect world, I’m using humor to convey serious messages. Right now with my political communication skills, on some issues and some current events that happened, I don’t feel seasoned enough to use humor to convey certain messages. But for a lot of things, when I have time and I’m super comfortable, I use jokes, memes, dances, to raise awareness. The average person doesn’t know a lot of these political buzzwords, they don’t know what certain offices do or how the government works. Because the government doesn’t want them to. I use jokes, dance, fashion, and events to raise awareness about these things—gentrification, mass incarceration, income inequality, food deserts, gerrymandering, basic income. A lot of people don’t know what these things are, but then they hear it in a rap song and it feels way more accessible to them. You might not know what a Rolls Royce is, but then you hear it in a rap song and then you’re like, ‘Oh Rolls Royce, I heard about that, that’s the one with the big wheels.’ A lot of people just need that first door to something for them to actually start taking interest, start gaining more knowledge. You just have to expose them to things.

Jill: Why do you think Donald Trump has been so successful as a politician?

Paperboy: The way Trump won the first time is that everyone kept talking about him. They kept saying his name. ‘Donald Trump just said something bad. Donald Trump just used the bathroom.”’Yes, he did, but you’re giving so much attention to that. People only have so much attention. You’re diverting their attention to Trump, good or bad, you’re devoting it to him, taking attention away from the candidate that hopefully supports what you’re fighting for. If your whole thing is ‘Donald Trump is bad,’ not ‘Support this person because they support XYZ,’ you’re giving all your promo to Trump, you’re giving all your energy to him. Even right now, I’m actively talking about Donald Trump. You asked me the question, but still, we’re not talking about why X candidate is so great. 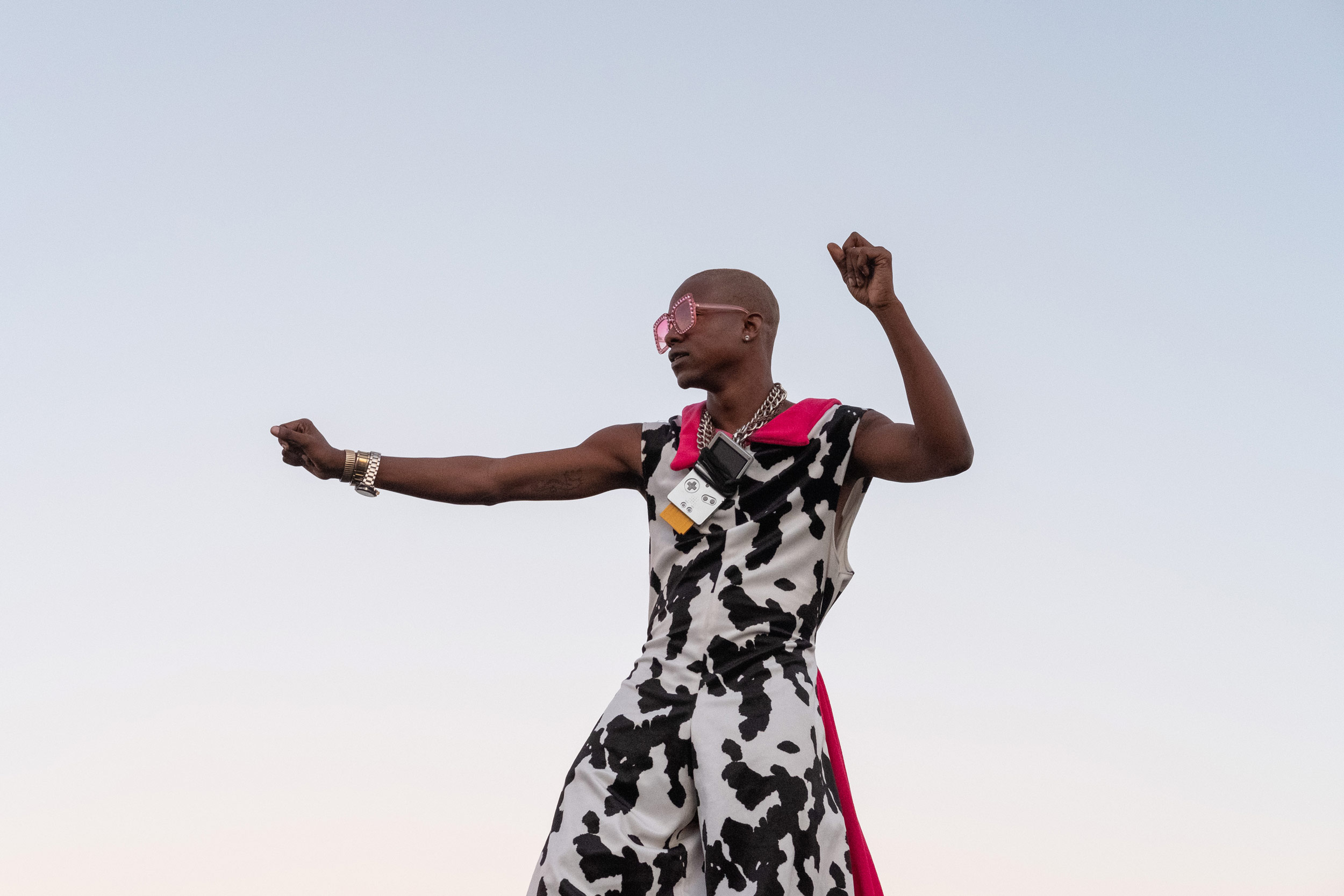 Jill: I mean, why would we say Biden is great?

Paperboy: Exactly. I wish there were better options. I’m not a Trump supporter—I’m an active protester, activist, a critic of Trump and the United States, that’s why I feel comfortable talking freely about this. But I also have to be critical about the people who put him in power, so that it doesn’t happen again. He is definitely tough to beat because he just gets people talking. Even him contracting COVID; the more people know about you, the more people feel comfortable voting for you. I feel like I know more about Trump than about Biden. I feel like a lot of people feel like that.

Jill: How did we get into this mess in the first place?

Paperboy: America has been a racist country, and in a lot of ways it deserved those four years of Donald Trump. It exposed the racism, the white supremacy, the sexism, the xenophobia in America. It was able to hide under Barack Obama, under this fake, ‘Everything is all good,’ when it’s not. Donald Trump exposing that honestly wakes enough people up to bring us closer to the light. Because there were a lot of white people—people of all races, honestly—that were comfortable. They didn’t care until Trump got in office and he wasn’t acting right and that’s when they started caring. I was like, ‘Wait, these problems with ICE existed with Obama, mass incarceration with George Bush, you didn’t care then. Police brutality was happening under Obama too; Trayvon Martin and Mike Brown were killed. Oh, now you’re talking about defunding the police?’ This stuff has been happening for a long time. Getting Trump out is not good enough. I prefer seeing the country learn from its mistakes and see what its issues are and turning from them fully than [seeing the country] put a bandaid on it so it just becomes a problem that gets worse and worse and [eventually] shows itself again.

Jill: So we need to thank Trump for the revolution?

Paperboy: He’s a very good villain. And villains create heroes. There’s a lot of everyday community heroes that are stepping up in different ways.