In a world of multi-hyphenates, Dr. Nelly Ben Hayoun operates on an extraterrestrial plane. Over the past ten years, Ben Hayoun has worked as a designer of experiences, a filmmaker, an educator, and director of the world’s first astronaut orchestra. Regularly collaborating with leaders in science and technology (from NASA engineers to top physicists), Ben Hayoun uses a diverse range of mediums to explore the intersection of the metaphysical and the scientific. Her experiential designs are mind-bending and reality-warping; in one instance, Ben Hayoun teamed up with a league of particle physicists to create an interactive installation in which participants traveled aboard boats through a dark, water-filled tunnel lined with thousands of silver balloons, simulating the experience of sitting inside of a sonic boom. Though her projects are often larger-than-life, Ben Hayoun’s mission is always firmly rooted in the real—she hopes her audience will walk away with the confidence to examine and forgo the artificial limits imposed on their own lives. This desire to inspire radical change forms the premise of much of Ben Hayoun’s oeuvre—including her ongoing radio show, in which she explores new models of creation in conversation with a wide array of change makers. Shifting mindsets is no easy task, but Ben Hayoun is gifted with a preternatural well of energy, a galaxy-reaching vision, and a unique understanding of the past—culminating in a well-articulated theory of possible futures.

These days Ben Hayoun is all about the Moon—working across mediums to explore the ways we can protect it from the effects of its inevitable colonization. Recently, Ben Hayoun directed a music video for The Avalanches’ collaboration with the International Space Orchestra, an ensemble of sonically-inclined space scientists from NASA and the SETI Institute. Soon, she will release her fourth feature film, Red Moon—using roleplay, magic, and doppelgangers to offer an experimental vision of a utopian Moon society. Far from fantasy, her creative practice is grounded in nearly a decade of experience as a thought-leader in the space industry, including heading committees at the SETI Institute and the International Astronautical Federation.

Ben Hayoun joins Document to discuss how she managed to keep going full-speed through quarantine, what she really thinks about Elon Musk, and how Red Moon acts as a template for new politics and transnational thinking. 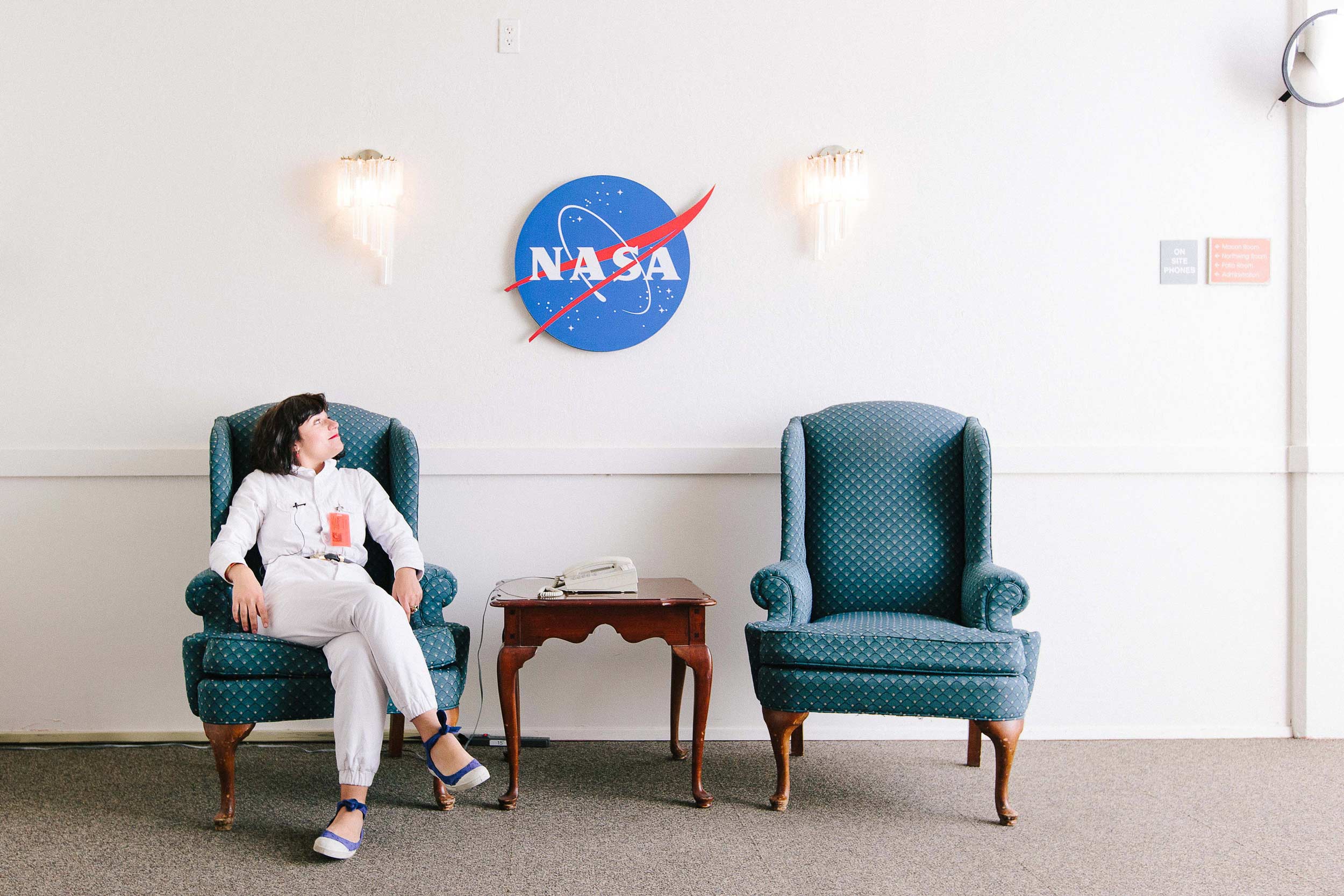 Biz Sherbert: You’re most often described as an “experience designer,” but you’re also a filmmaker, an educator, and a director of many things. How do you  describe yourself?

For me it’s never been a question about choosing, it’s always been a question of celebrating plurality. This pluralistic way of thinking is really the way I celebrate life in general. I think the problem [is] that when we’re in education we’re told that we need to be one thing. That’s a very colonial, imperialistic way of thinking about anything, really. Because it’s not true, you’re never just one thing.

Biz: Is your creative inspiration as diverse as the fields you work in?

Nelly: Yes. Even the fact that I’m really about celebrating plurality, and celebrating experience with a big capital ‘E’—this sort of 360 experience—means that I’m interested in pretty much everything. My curiosity has absolutely no end. Everything excites me, from a fire extinguisher to a lava lamp and how a lava lamp functions. There is just no limit. 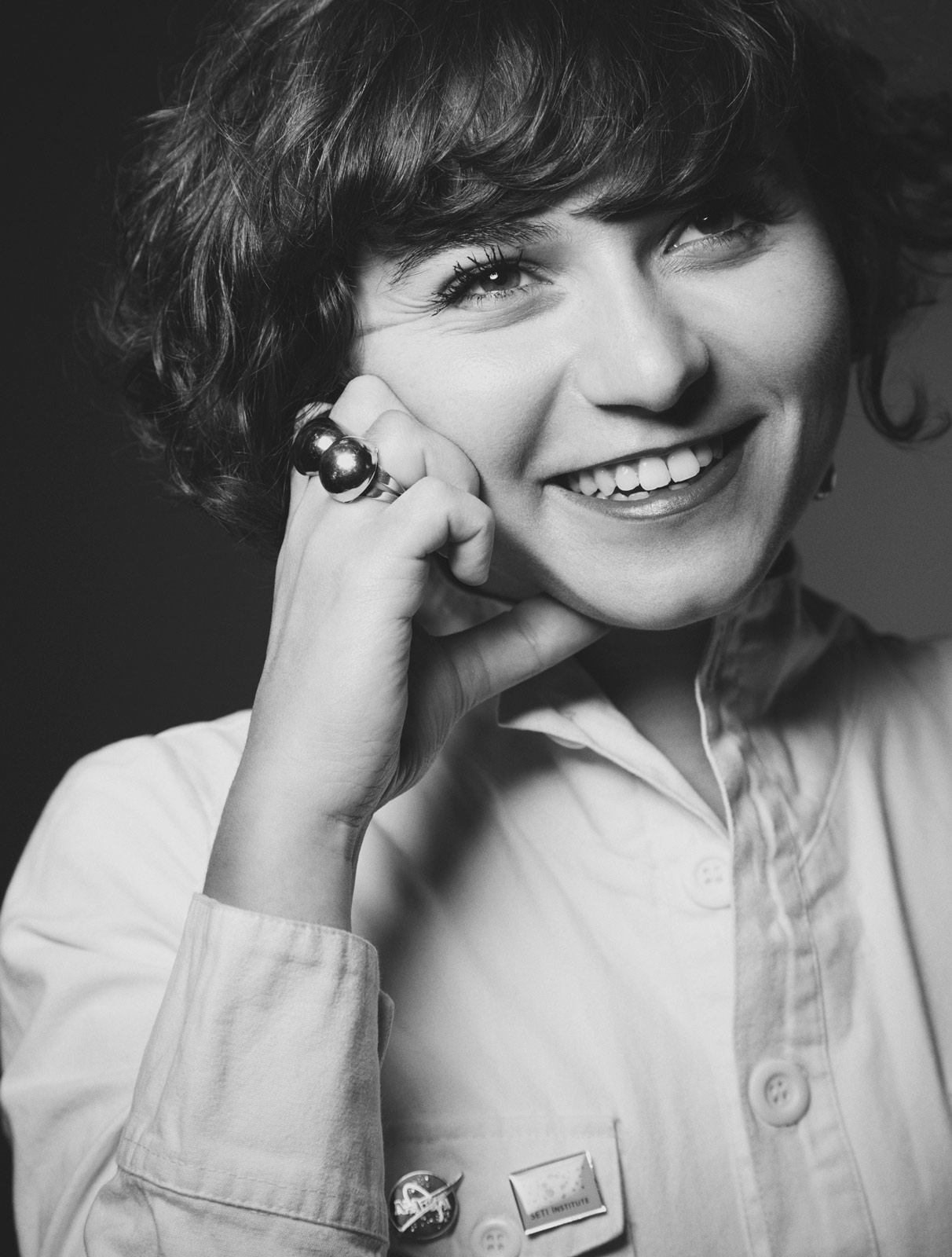 Biz: How do you work through creative blocks?

Nelly:  My way of dealing with it is going to see paintings. Initially, I trained in textile design and painting, so I’ve got a very symbiotic relationship with painting. I love to go to museums when I’m stuck and just let myself be inspired by the tones, the colors, the texture, the scenes. In general, that results in me finding a solution to whatever problem I have.

I often say the goal with the experience[s] has always been to give you the impression you would get in front of a painting. So if you go inside an experience I’ve designed, I want you to leave feeling exactly the same way that [you do] when you see a painting, where you feel impacted by it. You feel you have experienced something. You don’t really know what it is, but when you close your eyes you see the tone or pigment of the painting in a way that stays with you for a long time. To me, that is really important in everything I do.

Biz: Fieldwork is a really big part of your practice. What has lockdown been like for you? How has it affected the way you work?

Nelly: I’m currently working on a new feature-length movie called Red Moon, and Sundance just announced that we won the grant for the film. This is a milestone for me as a filmmaker, as a woman director, as someone who is half Armenian, half Algerian. To actually be recognized by the Sundance Institute, and to be selected for one of a very limited number of grants—it’s massive. 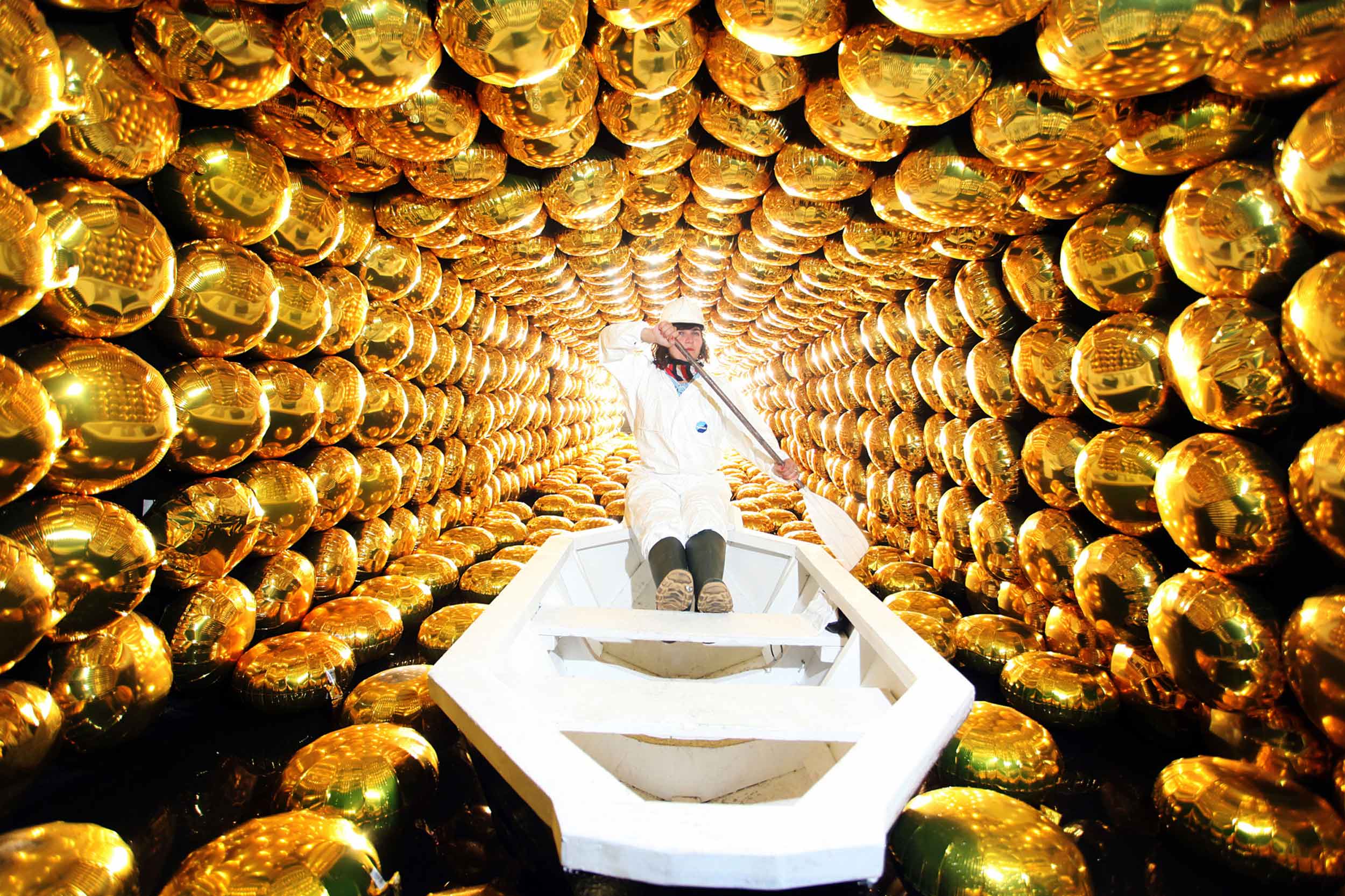 Nelly: But then, bam—the pandemic happened. I’ve been waiting for this for the past 10 years— I’ve done three feature-length films and this is the fourth. [When] I got [the Sundance grant], it was like, “Actually, you cannot do anything with it, you cannot even start development of the film.” This got me thinking, because I’m not the type of person who will let myself go down. I said, ‘Fuck it, we’re gonna make it happen.’

What happened during the lockdown was actually the recognition that although everybody was saying, ‘We are all experiencing lockdown the same way,’ we [were] not. There are national and governmental responses which are very local in this phenomenon. That’s exactly what my film is about, in a way. It’s trying to say let’s shift this mindset [and say] let’s rethink it completely, let’s not reproduce this way of functioning that is really nationalistic in vision. Let’s try and not replicate that model on the Moon and elsewhere. Let’s try to be a bit more inventive. It’s an acknowledgement of history and it’s an acknowledgement of the urgency not to reproduce it.

Biz: Thinking about the future is really scary for people right now. Do you think your exploration of possible futures through creative mediums helps people reach a place of better understanding or acceptance?

Nelly: One thing that I’m very picky about is designing experiences that would be meaningful for communities, that will empower them—and empower countercultures, specifically—to see themselves in institutions and give themselves an opportunity to actually change things inside NASA, or in [other] space agencies, or in politics. This is what I dedicated my life to—[designing] platforms that [demonstrate] you can actually do things differently, that you can shift the way that things have been done for the past 100 years. That’s what we do at the University of the Underground. It’s extremely important, especially in moments like this, that people start to organize communities. This notion is something that’s very much endorsed by the philosophy of Hannah Arendt. [These communities] each have a different way of talking—it’s not about having one opinion, it’s about having many, many different opinions. They can develop a new form of politics.

My whole mission now is to really, really push this notion of new politics, of new forms of democracy, because the democracy we have right now doesn’t work. For me, it really is about doing it urgently, and Red Moon is allowing me to actually start to initiate some form of answers through the medium of the Moon and the landscape of the Moon. 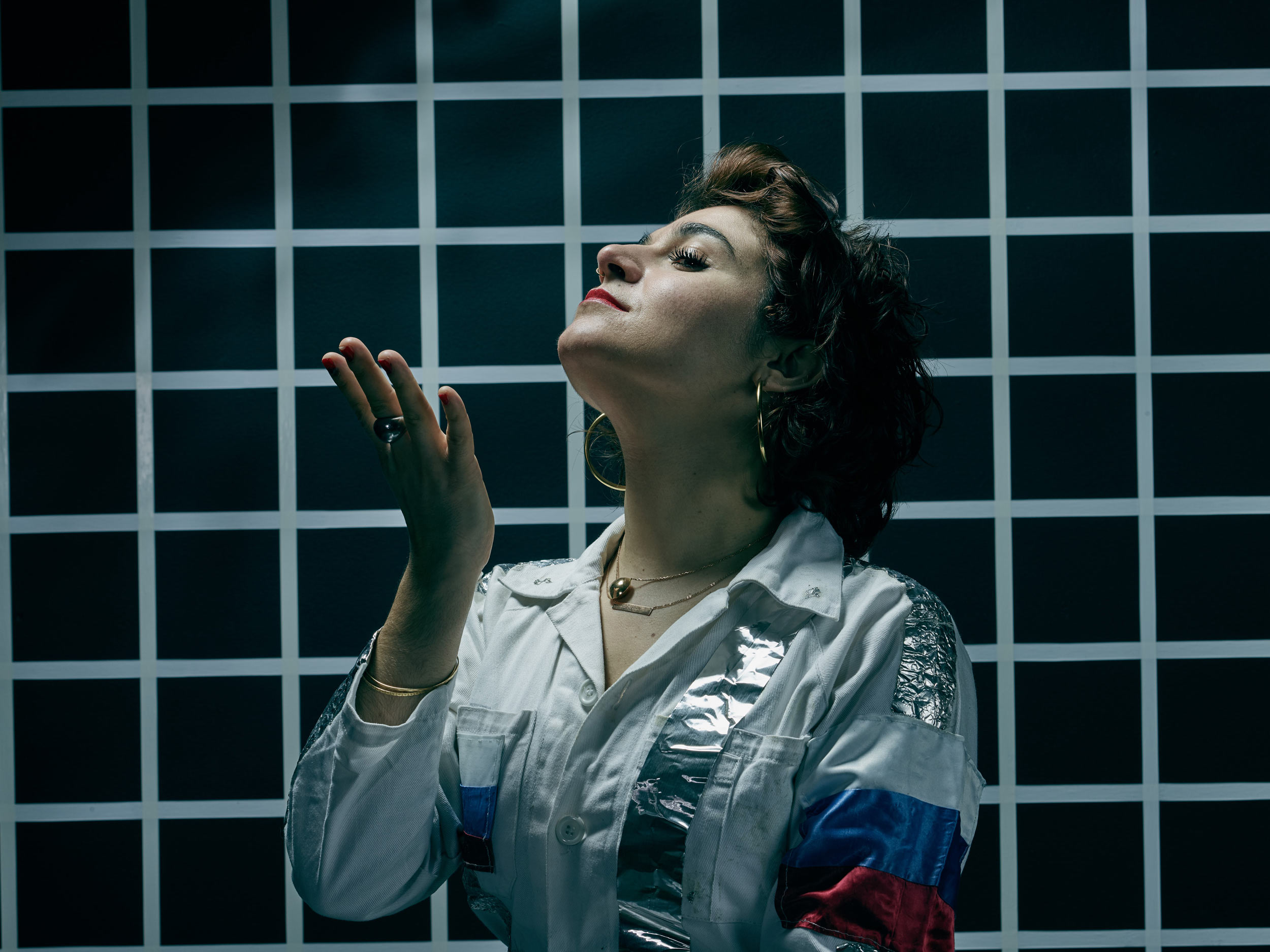 Biz: A lot of your work, especially recently, is related to space. Do you have any thoughts you’d like to share on Elon Musk or SpaceX? I feel like that’s the general population’s idea of what the future of space exploration is.

Nelly: Back in the day, and we’re talking not too long ago—2013, when I went to the International Astronautical Space Congress, people would rush to listen to NASA administrator Charles Borden, because NASA [had] the biggest budget. They were, like, the ultimate.Then suddenly Elon Musk lands on the planet and no one shows up to listen to Charles Borden. Then there are 10,000 seats [for] Elon Musk. Suddenly Elon Musk has brought new excitement to the field of space, because he is the start of privatization of space. He really started [the idea] that we can do it ourselves, we can start new deals between private and public agencies. For a while, I was also very excited to see what kind of new projects would come out of it, but then [I saw it become] very much about how to empower governments and governmental agencies to do what they wanted to do.

This is where it becomes scary or problematic—when these private sector [figures] start to partner with the governmental side of things, suddenly their wild dreams become possible. Not only do they have their own funding, but they also tap into democratized funding, and then their capacities become even bigger. Of course, it’s amazing for space exploration because it means we can explore further, faster, and on a bigger scale. But all of this is happening before we have done the work of thinking about, What have we done on this planet first?

Of course you cannot ask [scientists] to be historical experts. You need historians, you need a diversity of people who are going to say, ‘Hold on a second, what have we done and why? Why will we go into space for anything beyond human curiosity and exploration? Why will we go into space if it’s not just to develop knowledge or culture?’ Because that’s what [space travel] was about initially.That kind of mindset is not [what space is about] right now. Right now, the way things are going in space is private-meets-public funding: ‘Together we’re going to develop the next settlement and mining system on the Moon. We’re gonna mine the moon. We’re going to create new capital, we’re going to create new fortunes. We’re just going to redo the same system and never come up with any fresh [ideas].’