It’s easy to read the opening look of Louis Vuitton Spring/Summer 2021 as a direct and simple missive—its definitive element being a ribbed sweater that read “Vote” in bold, sherberty letters, set against a spill of chalky black cheetah print. The aestheticization of political action has long been debated but in 2020, a time when every gesture can be politicized when examined closely enough, its role in fashion is something we must accept.

In light of the perennial criticism of so-called ‘t-shirt activism’ in the past few years, creative director Nicolas Ghesquière’s legible first look must be read with a touch of informed irony. Afterall, several other shirts in the collection read ‘skate’ and ‘drive’—set in the same imperative mood and similar loud, graphic types, but lacking the commanding urgency of a call-to-action like ‘vote.’ While the affiliation of these disparate terms may seem trivializing, the move is actually consistent with Ghesquière’s vision for the collection—a stylistic exploration of ambiguous territories. 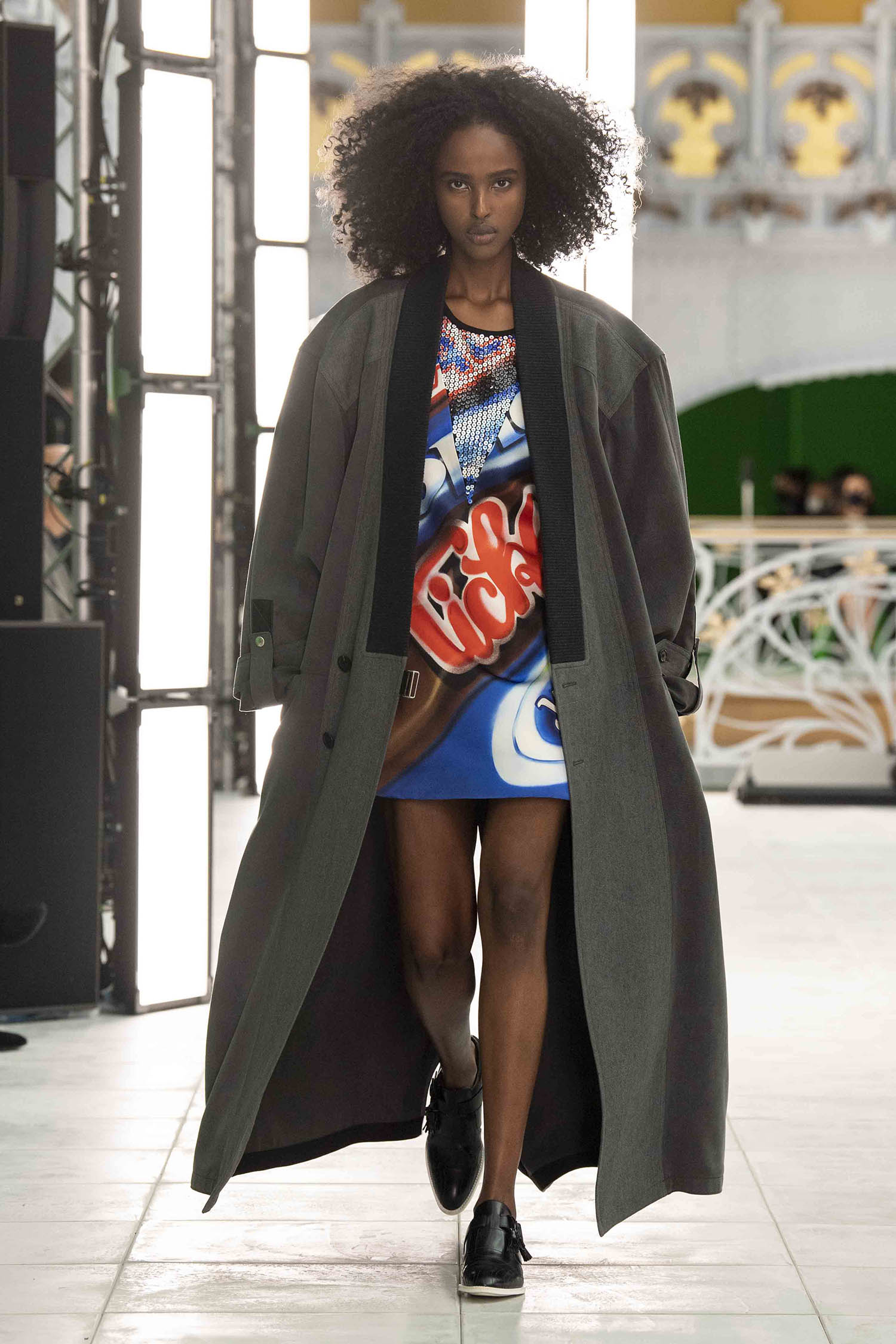 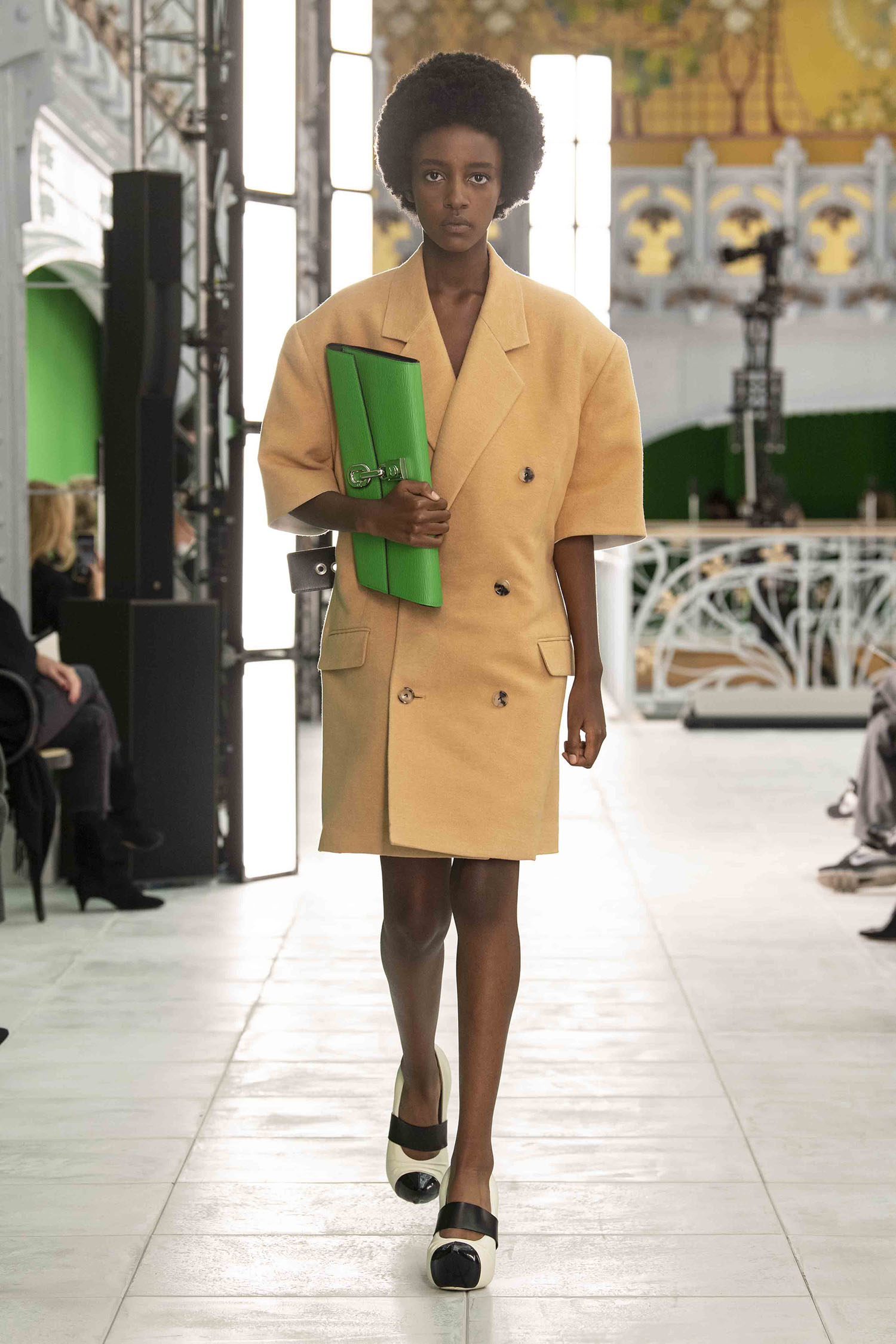 Ghesquière avoided the trap that many talented designers before him have fallen into when attempting to capture the essence of androgyny—namely, obscuring the wearer’s gender identity rather than enhancing its fluid properties. All too often gender fluid individuals are limited to a selection of drab blazers and button-ups, but Louis Vuitton’s show, set in the iconic Paris department store La Samaritaine, was anything but blasé. While Ghesquière leaned into the instant androgyny offered by the baggy and boxy proportions of the ‘80s, he livened things up with conspicuous colors and flashed-up textures. Think a heavily shoulder-padded pantsuit done in a sea of silver sequins, or a shift dress furnished with shimmering paillettes as wide as the bottom of soda cans, paired with a sandy puffer anorak. Not every look was so outspoken though—many were offset by quieter elements like panels of creamy, pliant knits and princess sleeves that draped just right. 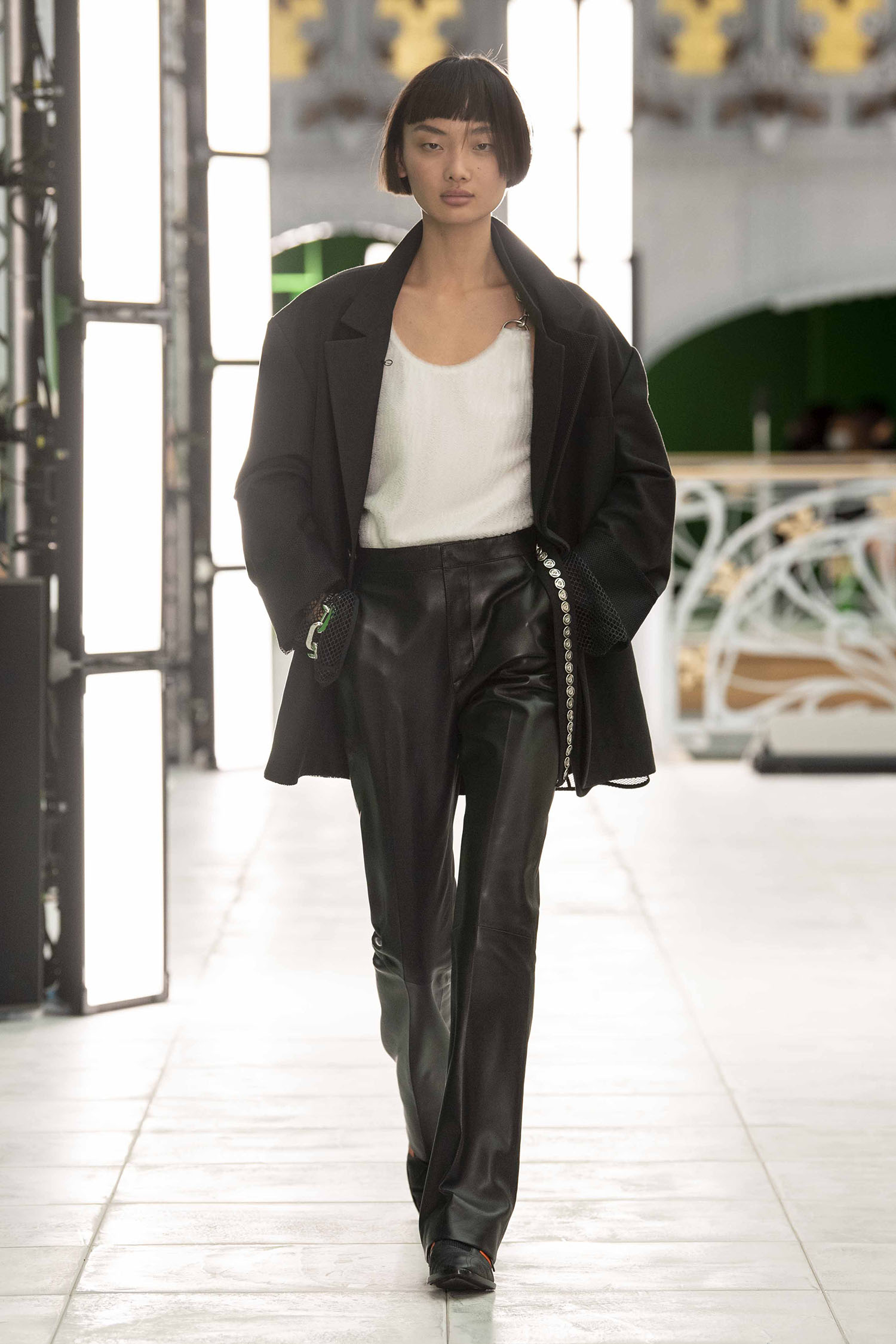 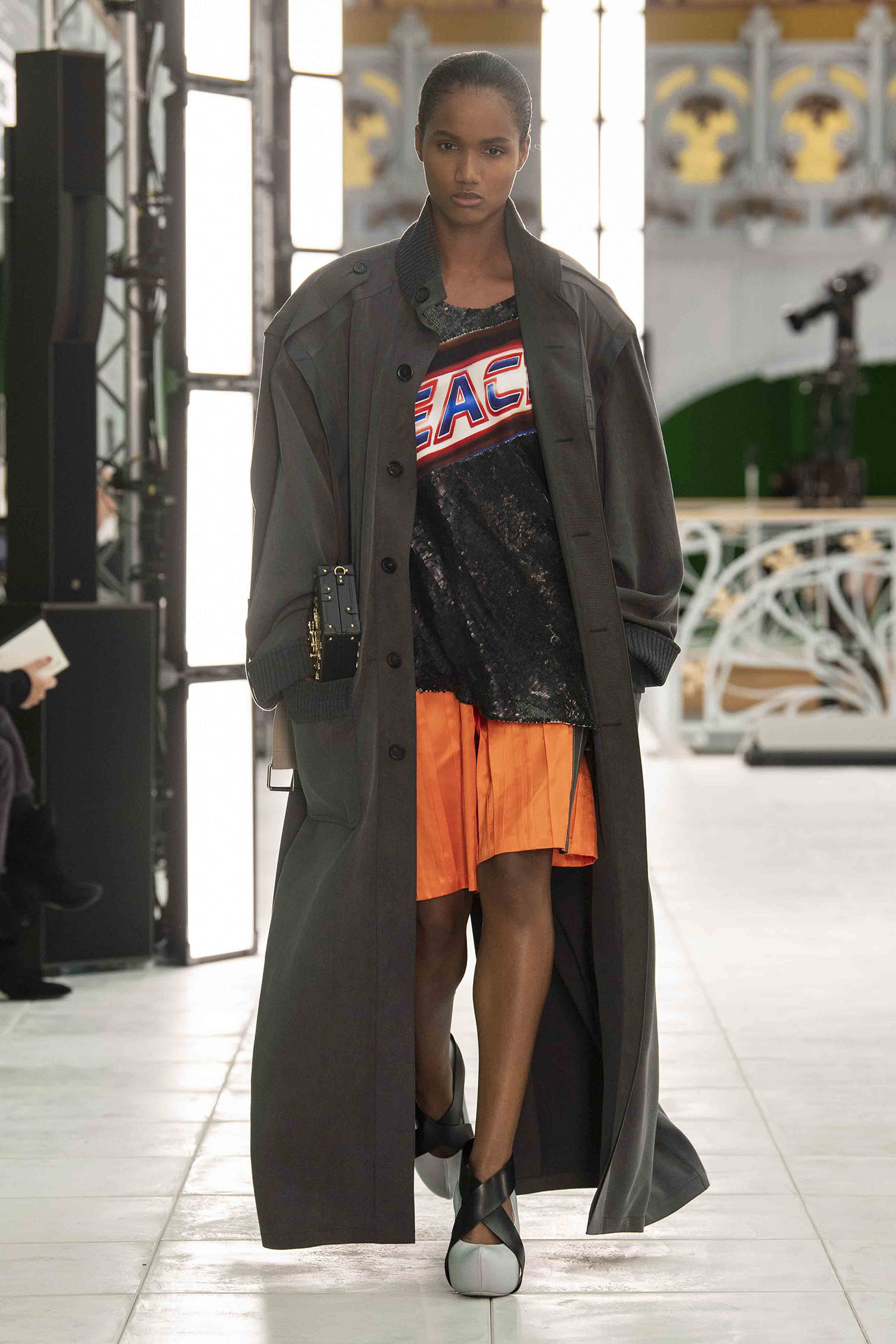 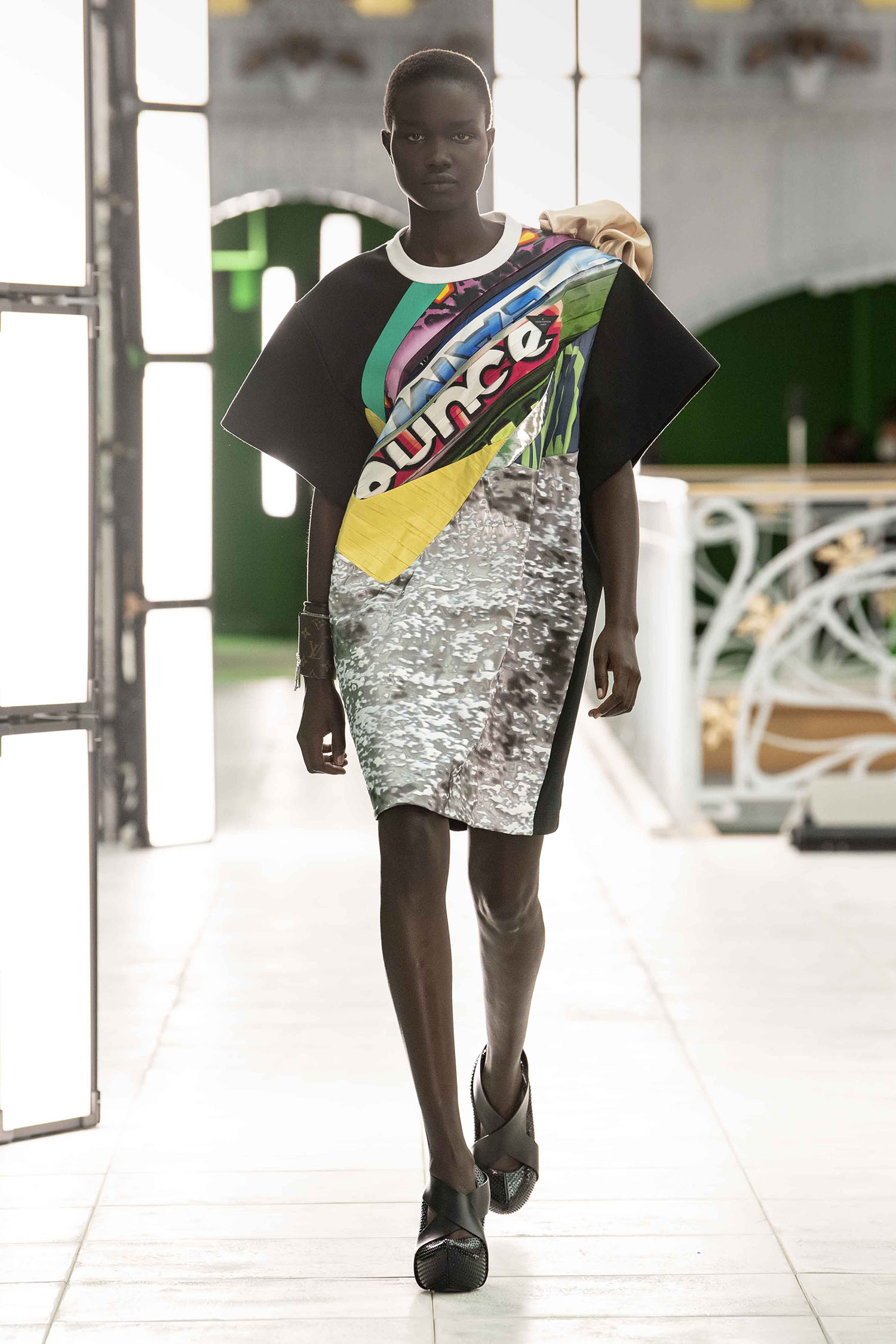 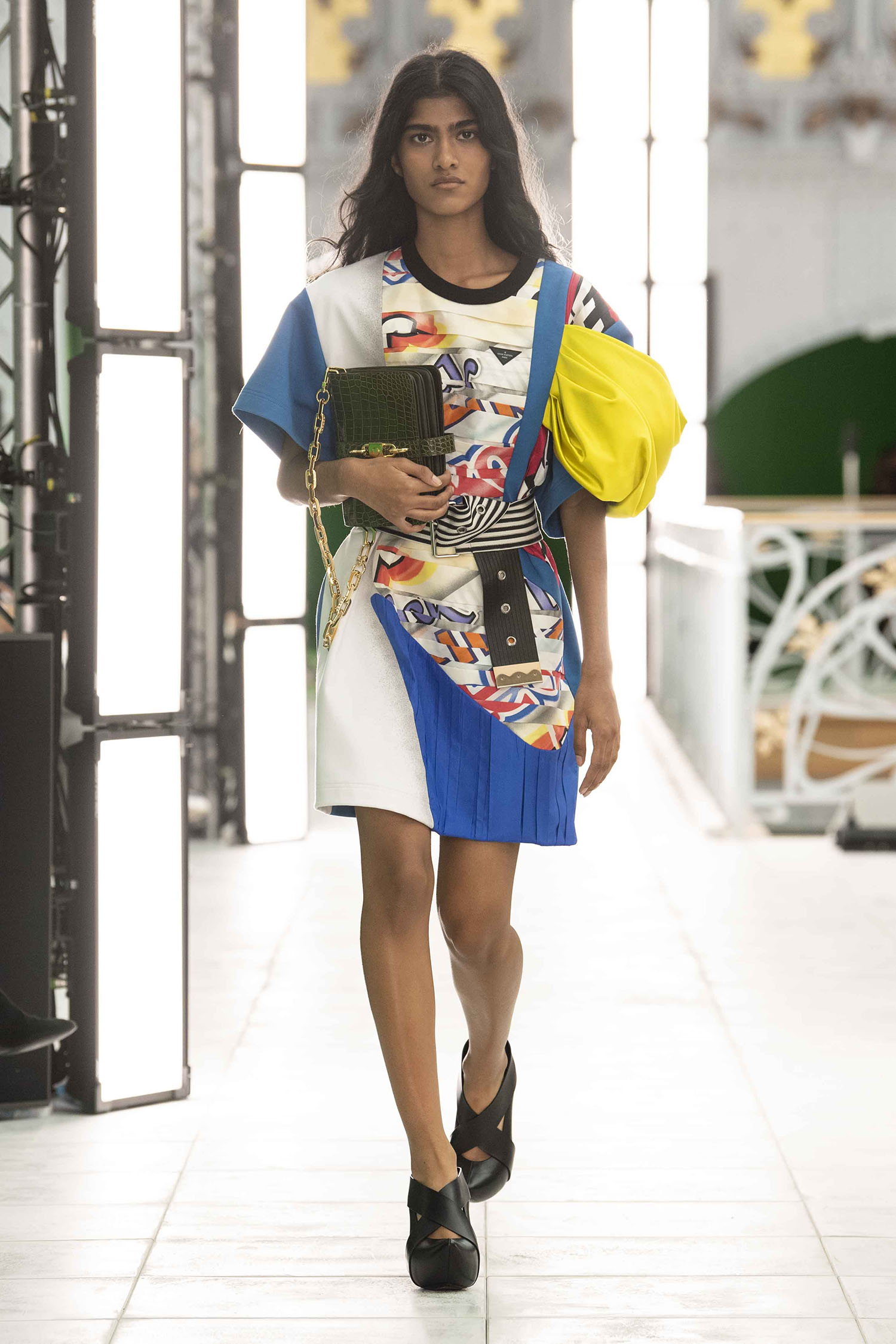