With their new project ‘My Agenda’, the genre-subverting artist is turning toxic masculinity on its head.

“I’m always surprised that I don’t get more hate,” Dorian Electra contemplates over Zoom from their bedroom in Los Angeles, sipping on a lime Lacroix. “I see other artists, they’re bigger than me or smaller than me or whatever, that get way more hate. I’m a way more easy-to-hate-type person. I feel like I’m way more annoying.” Over the course of our 90-minute conversation, Electra is far from annoying, but I can see why they might steel themselves for an onslaught of online vitriol: their music toes a careful but risky line.

In the music video for “Edgelord”—the latest single from Electra’s full-length project My Agenda, released October 16—the deep web “manosphere” cultural references run rampant. The visuals kick off in animated form, with Electra inhabiting two virtual avatars: one is Batman’s Joker, standing at the top of a building, looking down at another Electra wearing a rabbit costume (their “fursona,” a person’s adopted animal identity within the Furry fandom.) I’m an edgelord/I’m so edgy, they sing in a mild distortion against a backdrop of gritty synth beats. (For the unfamiliar, an edgelord—according to dictionary.com—is “someone on an internet forum who deliberately talks about controversial, offensive, taboo, or nihilistic subjects in order to shock other users in an effort to appear cool, or edgy.”)

We meet Electra again—corporeally this time—and the Joker aesthetic lives on, but it’s on their own, queerer terms (long artificially dyed green hair, a winged purple coat.) We live in a society/That’s always lashing out at guys like me/They pushed me to the edge you see/Never, never, never gonna come down. Then they take on another Batman icon, the Riddler, customizing the iconography that is analogous to edgelord culture (fedora, cane.) After more encounters with Electra in a rabbit suit, the scene cuts to none other than Rebecca Black: the now grown-up singer whose 2011 debut single “Friday” went wildly viral for all the wrong reasons. Black—replicating an exact scene from the “Friday” music video—sings her verse: Been in the game 6, 7, 8, 9 years/Swim fast past every crocodile tear, until her and Dorian come together, as their own incarnations of the Joker and Harley Quinn, spit-balling and bat-wielding and havoc-wreaking. 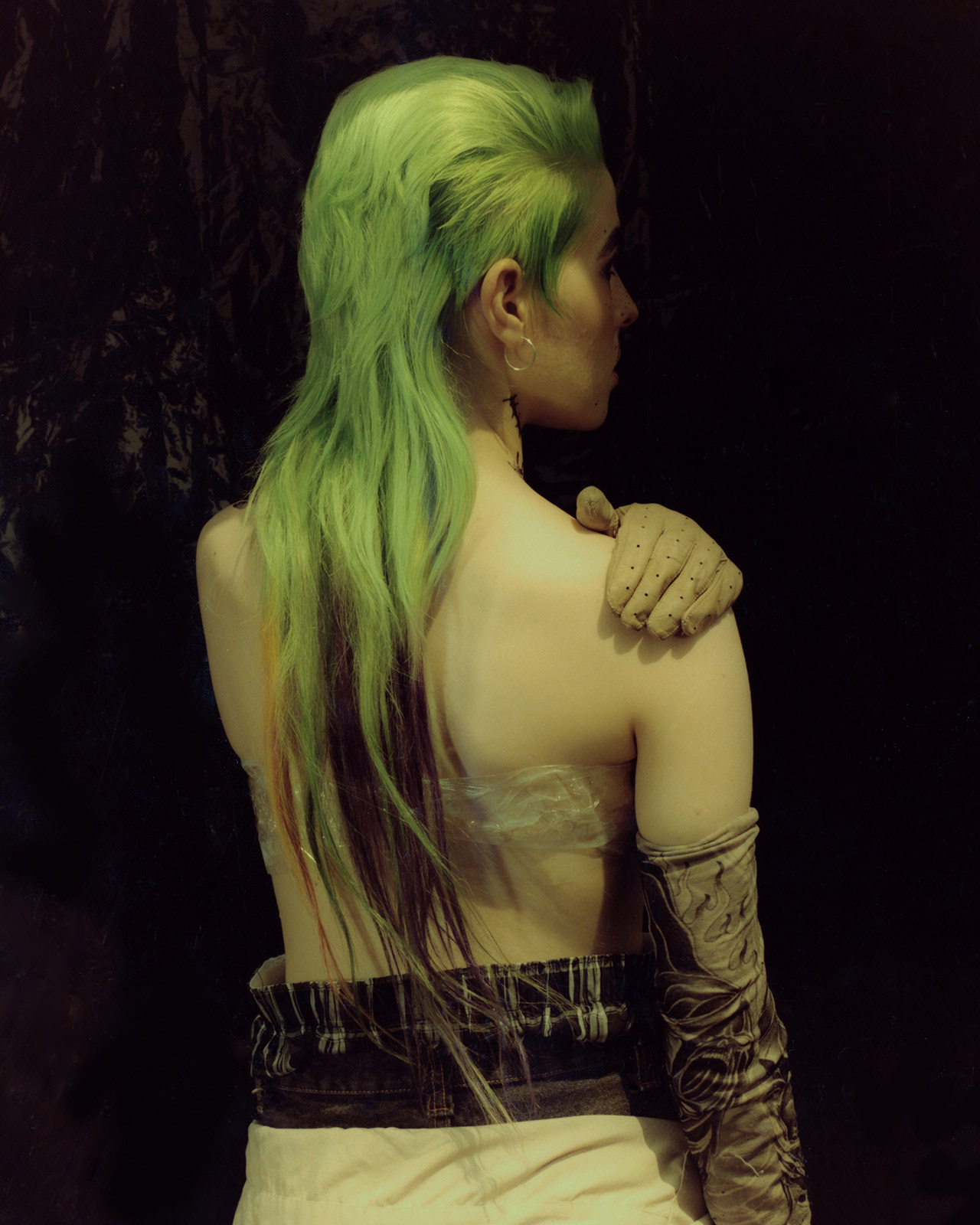 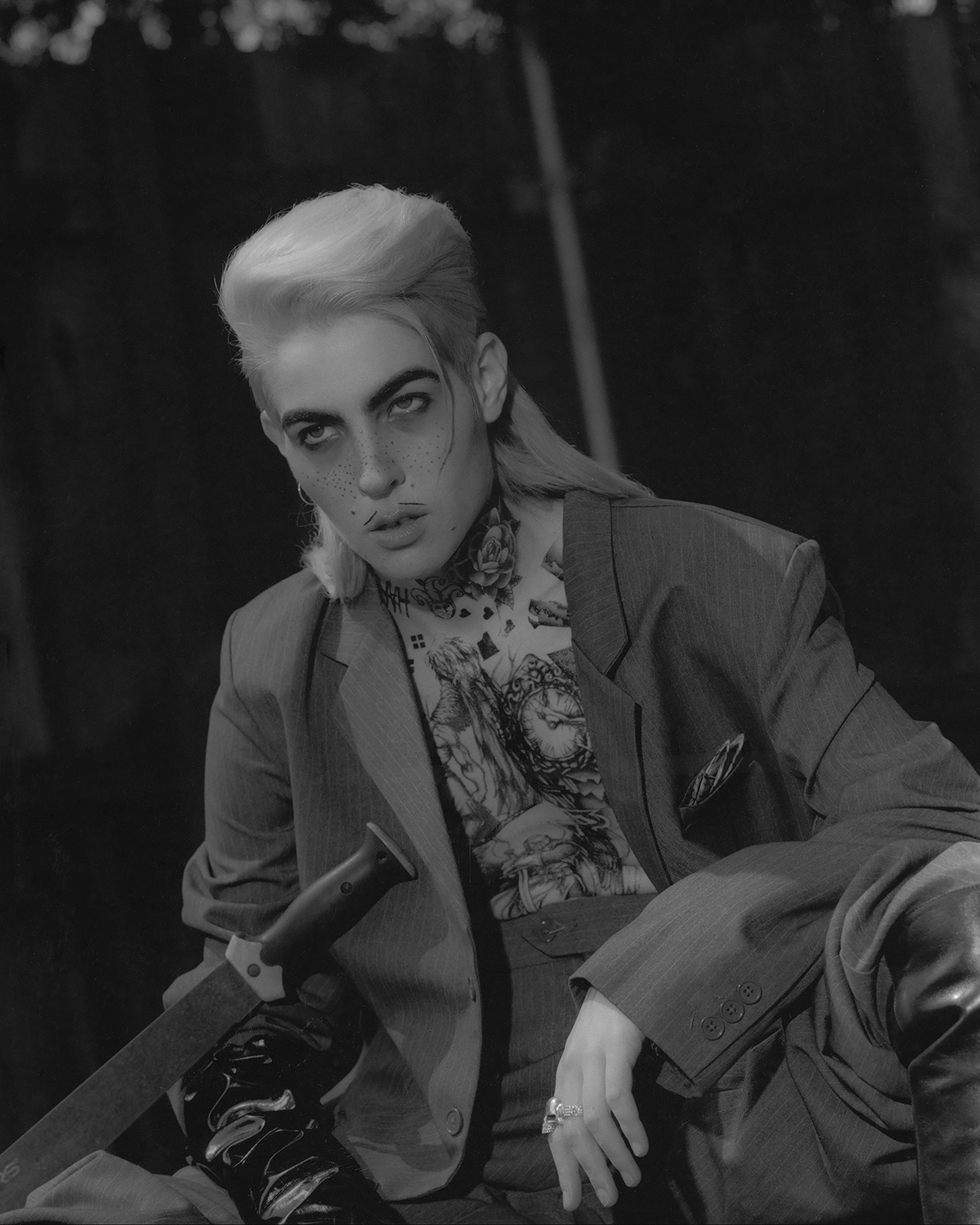 “Edgelord” is a thrilling and dense text, and an apt case study for the multiple facets of inquiry that are at play throughout Electra’s body of work. “There’s that meme that’s like, ‘How many layers of irony are you operating under today?’ That really, really speaks to me,” they say. Black was a perfect featured artist for the song—others on My Agenda include Village People and Pussy Riot—because of her infamous internet cult status. “I cannot imagine what she went through… not just internet trolls but famous adults on talk shows making fun of a child. [‘Edgelord’] is all about internet trolls, and the hate you get online. But it’s also about edginess, and how we on the left need to take back the edginess and repurpose it for a politically progressive end. It’s a narrative we need to wrestle back, because it’s a powerful tool.”

Ever since their 2010 music video “I’m in Love with Friedrich Hayek,” an ode to the Austrian economist, Electra has been acerbically rhapsodizing on the history of ideas, using wordplay to distil their erudite sensibilities. “Career Boy” twists capitalism and Wall Street bro culture into breezy bubblegum pop: Stuck up in the office tower, you know it’s pure joy/And that’s my super power, I’m a career boy. The languid pulsing of “Gentleman,” replete with a sax riff, embodies a ubiquitous fedora-tipping meme: I’m a gentleman/Take my gentle hand/Off to a gentle land/I’m a gentleman. “If you can reduce some complex idea into rhyming words… if you have to put it out into something anybody could understand, it’s a better test.”

Facilitating comprehension and understanding is a great way to characterize Dorian Electra, both as a musical persona and as a human being. As we speak I am swept into a torrid of information and epic storytelling. I learn about the Federal Reserve, social dynamics in Houston, John Maynard Keynes, neckbeards, the M’Lady meme. They are assertive and bold but in a manner that is inclusive, not intimidating: their bright eyes flicker, their words spark and flash in rapid succession. They reel you in to their particular and glitchy world, an in-between place where few others have successfully been able to exist.

Where their 2019 debut album Flamboyant directly engaged with ideas of sexuality and gender—largely motivated by the rise of the millennial alt-right after the 2016 election—My Agenda purposefully zooms in on toxic masculinity and incel culture, a world that Electra has unique proximity to. In high school, when they were 14, they were indoctrinated into libertarian ideology by a charismatic gay teacher, an “Oscar Wilde-like Socrates mentor type” who lured Electra and their friends into libertarianism by espousing values of individual thought and minimal government intervention. Growing up in Houston in a progressive family, Electra’s newfound political beliefs were a form of rebellion. Once the 2008 housing bubble burst, they dove even further into libertarianism’s economic aspects, fueled by the tenets of the Austrian School. (“So that’s really more what it was. ‘Libertarian’ is like the common parlance because it’s like, nobody knows what the fuck the other thing is.”) 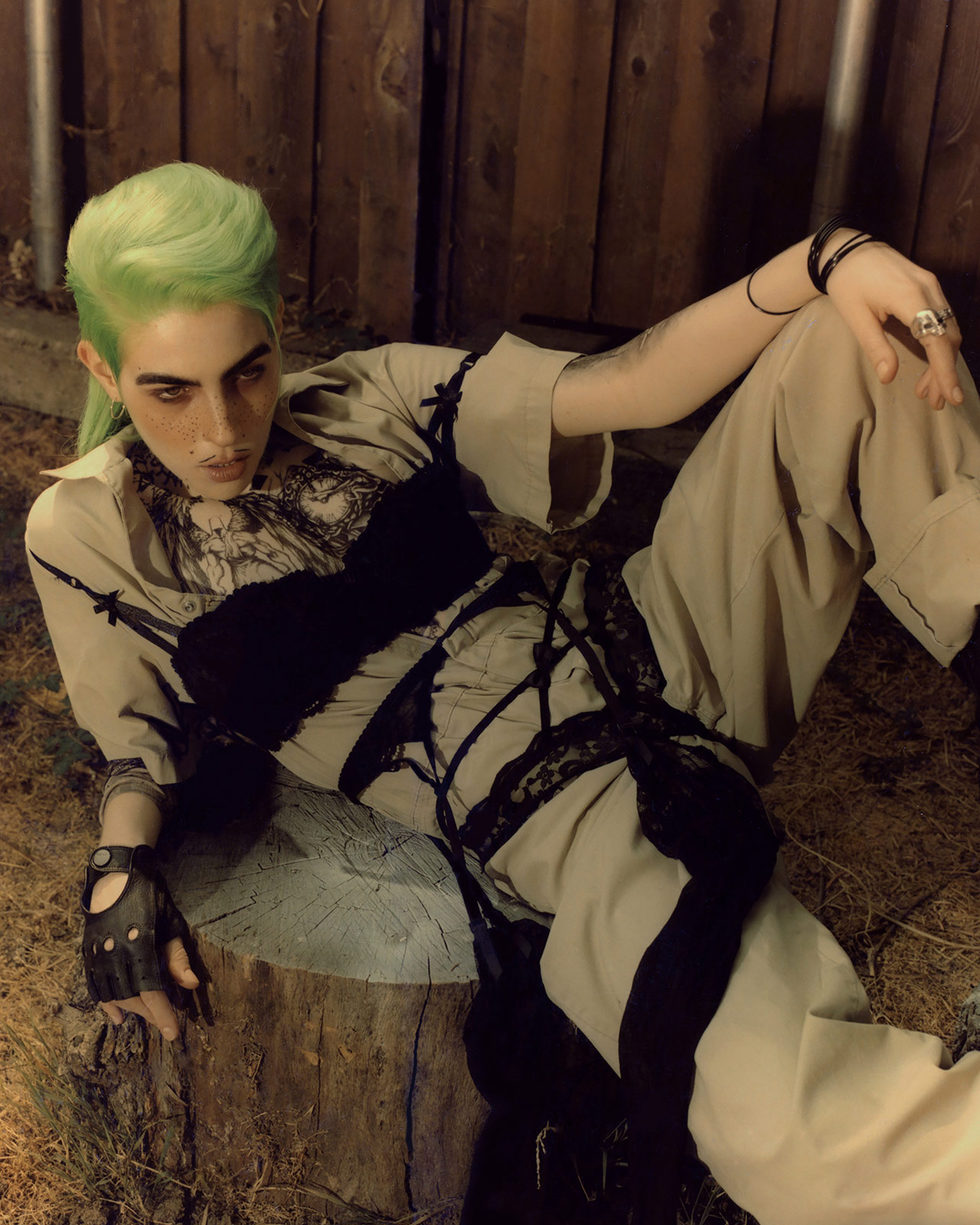 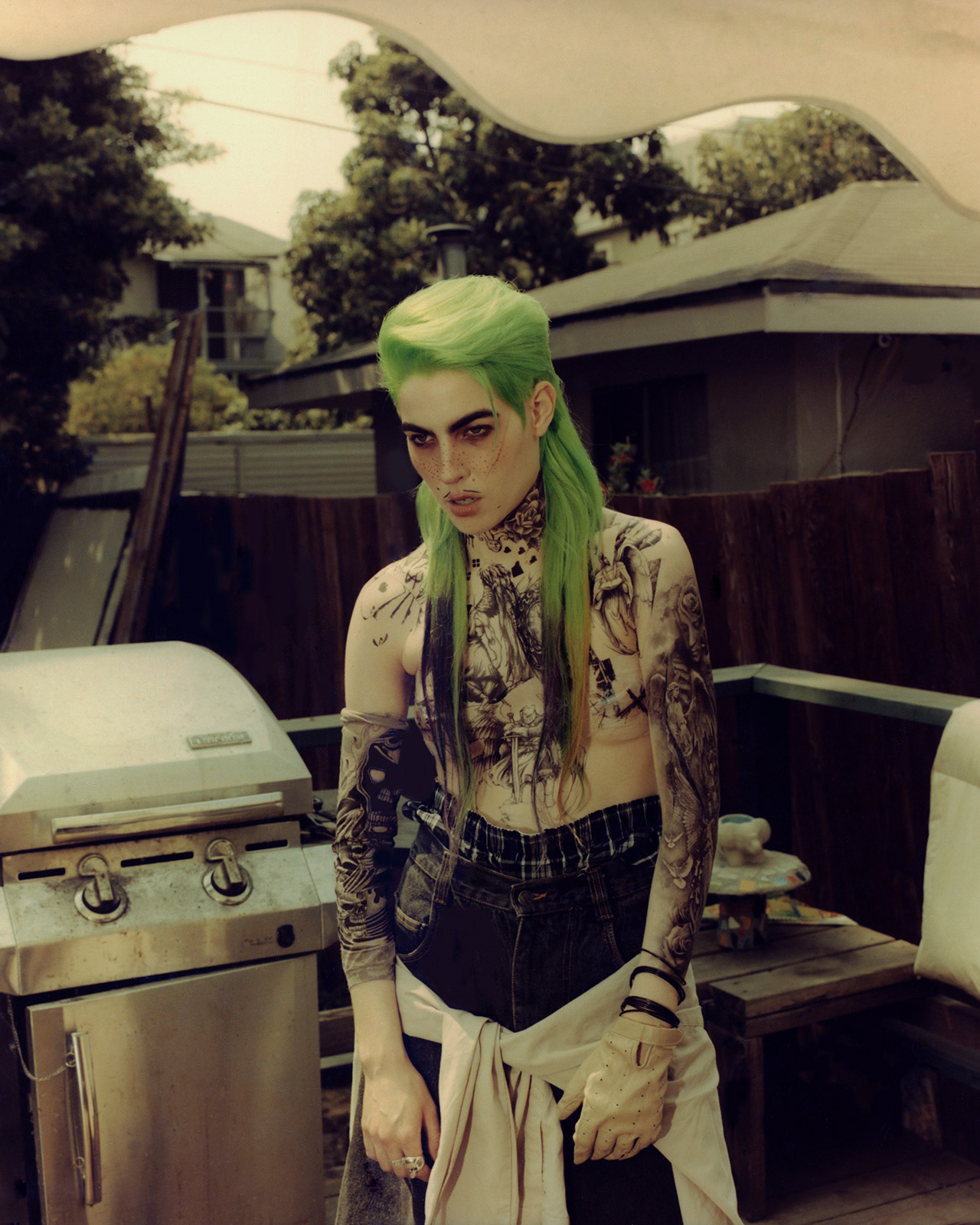 A series of circumstances prompted Electra to better understand their true alignments. In college they did a semester-long independent research project on the history of economic crashes in the United States pre-Great Depression—“all that shit you never hear about, basically”—and realized just how selective the libertarian doctrine they were taught had been. “People did not have answers for the causes of these crashes that fit in with the narrative I’d been told.” They had also observed just how much of an outlier they and their friends were at the libertarian conferences they attended: “We were concerned with environmentalism, feminism, racism, and everything within that. I’d be like, ‘Wait a second, why are there only all these cis white middle or upper-class males?’”

While, in hindsight, Electra is grateful for their wake-up call, the revelation at the time played out like a crushing blow. “I realized that the majority of the libertarian ideology is a tool that is used to support and serve the interests of the ruling class. Folks with money. And I felt so used.” What once seemed like an empowering mindset—dominated by a desire to abolish the war on drugs and a distrustment of the prison-industrial complex—had been exposed as a manipulative brainwashing tactic. In the present day, though, they have been bestowed with a rare privilege unfamiliar to many progressive millennials: they have an intimate idea of how the other side works. “I have a broader political understanding that is beyond my own current one, which sits far more on the left. I believe that strengthens my ideas.”

By leaving libertarianism behind, Electra has been able to spend the years since repurposing the mechanics of the movement within a queer framework, eschewing boundaries between countercultures by finding a mutual language between them instead. Like the “Edgelord” music video, My Agenda’s layers of sincerity and self-deprecation invite a wide audience. The project, in both its visual and aural form, decontextualizes the iconography that we associate with the darkest realms of the manosphere, like incels and 4chan; in doing so it is radicalized and reclaimed, and feels emphatically non-judgmental. “I try to be really generous,” Electra says. “I want to be careful when I do [the] videos that I am using aesthetics but not just making fun of people, because that makes me feel disgusting.” 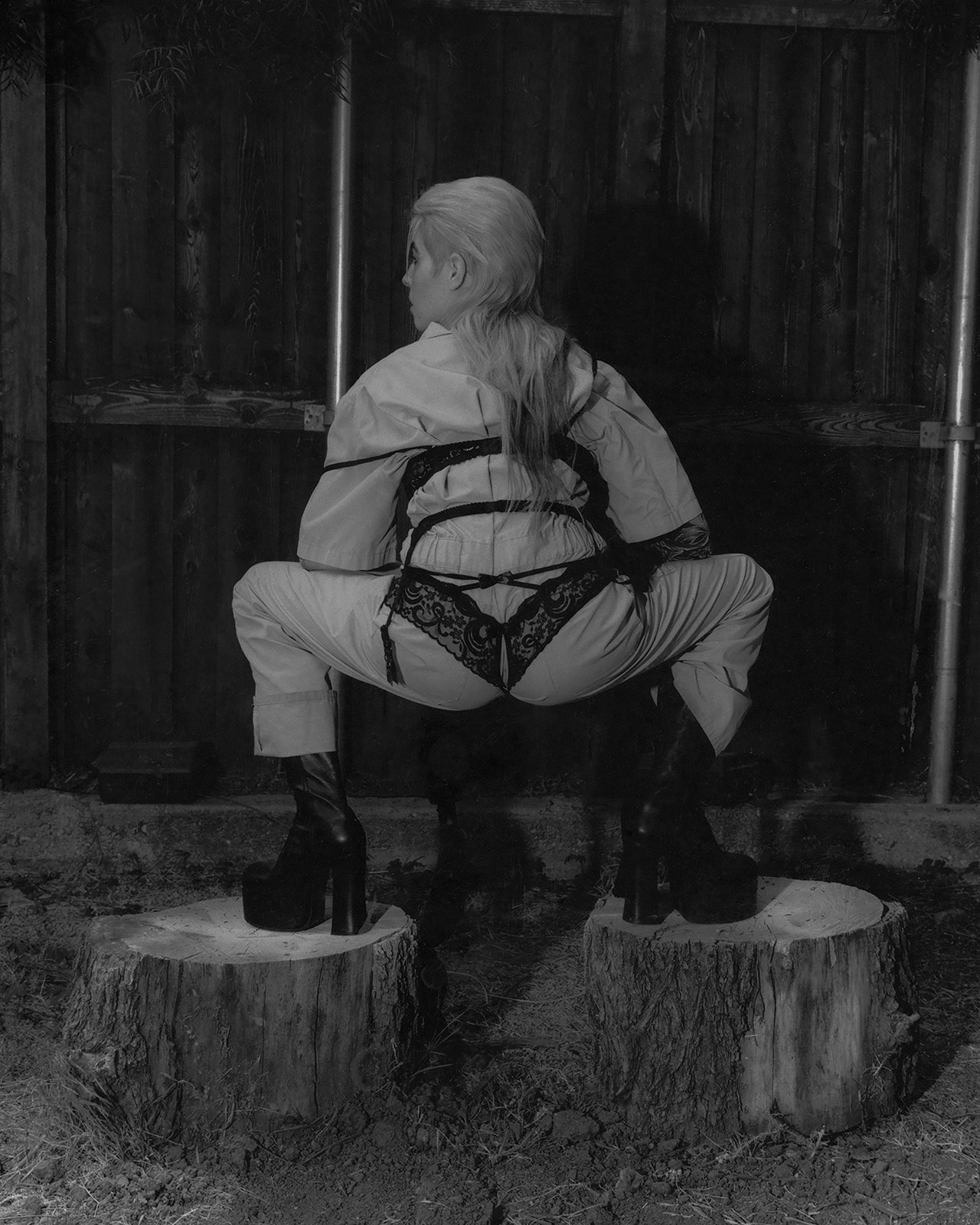 Generosity and openness are clearly fundamental to Electra’s sense of self. “I want my work to sometimes be a gateway into somebody accepting parts of themselves,” they say; they want the left to be more careful of the way they deliver their messaging, fearful that it might unintentionally push people on the right even further away.  An enduring love of Socratic dialogue, carried over from their libertarian mentor, is evident in our conversation even over Zoom, as they regale me with anecdotes and data points and multiple mini-theses. It’s a transparency and scrupulousness that pervades their work and is devoured by their devoted fanbase, who revere their every move. Electra may be one of few people to have transitioned so swiftly from the role of indoctrinee to indoctrinator: their stans belong to the Church of Electra—an individual of which is known as an Electralyte—and earlier this year they donated thousands of dollars to LGBT centers from making “official bootleg merch.” The cult following is something that Electra is both thankful for and doesn’t take lightly. “I’m hyper-aware now,” they assert.

Towards the end of our conversation, I ask them: in anticipation of My Agenda’s imminent release, what is Dorian Electra’s agenda? A playful look flits across their face as they breathlessly relay the genesis of the project’s title. Initially it was a play on the gay agenda—“the idea that gays are organizing to tear down the traditional family and all that is so funny to me”—and the title track, which features Village People and Pussy Riot, is written from the perspective of a conspiracy theorist, “basically this gay dictatorship, and a person that is plotting to take over, and they are representing the gay agenda.” They pause. “It’s partly a funny falsehood. We do need to band together, and we do need to take to the streets.”

Then they delve deep into the significance of the featured artists: the fact that it’s illegal for Pussy Riot to express any sort of non-heterosexual behavior, whereas Village People “have infiltrated straight mainstream society with some of the gayest music in history. You’ve got people at football games, bar mitzvahs, hetero-ass weddings doing this ‘YMCA.’” Their expression changes as they talk about the project’s darker side. They were sure not to shy away from the bleakest underbellies of the themes and cultures they explore: while working on My Agenda they read the Elliot Rodgers manifesto, aka the Isla Vista murderer; they researched homegrown terrorism and the trend of young white men going on killing sprees, the mental health crisis in the United States, suicide and misogyny: “things we’re not addressing or looking at.” 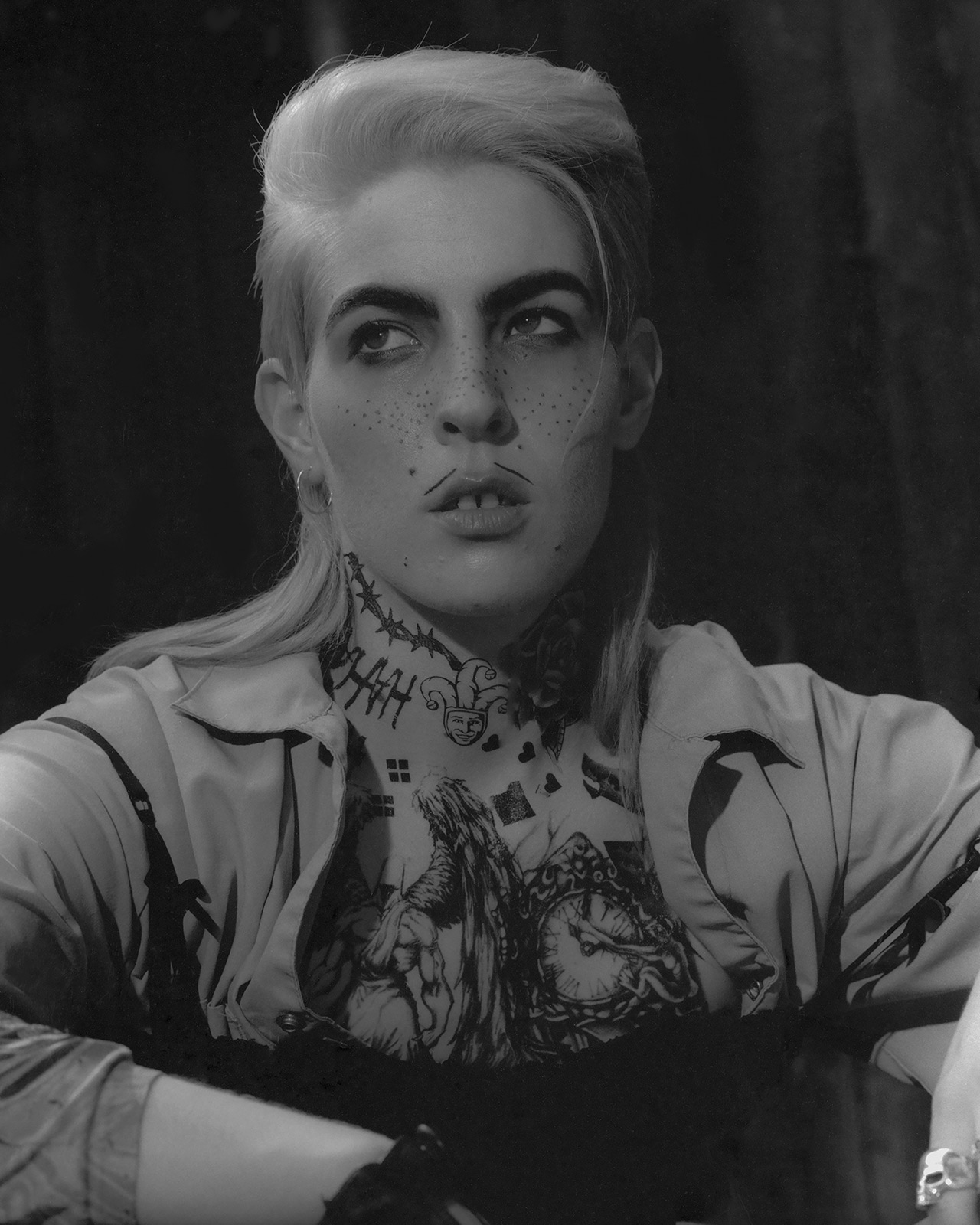 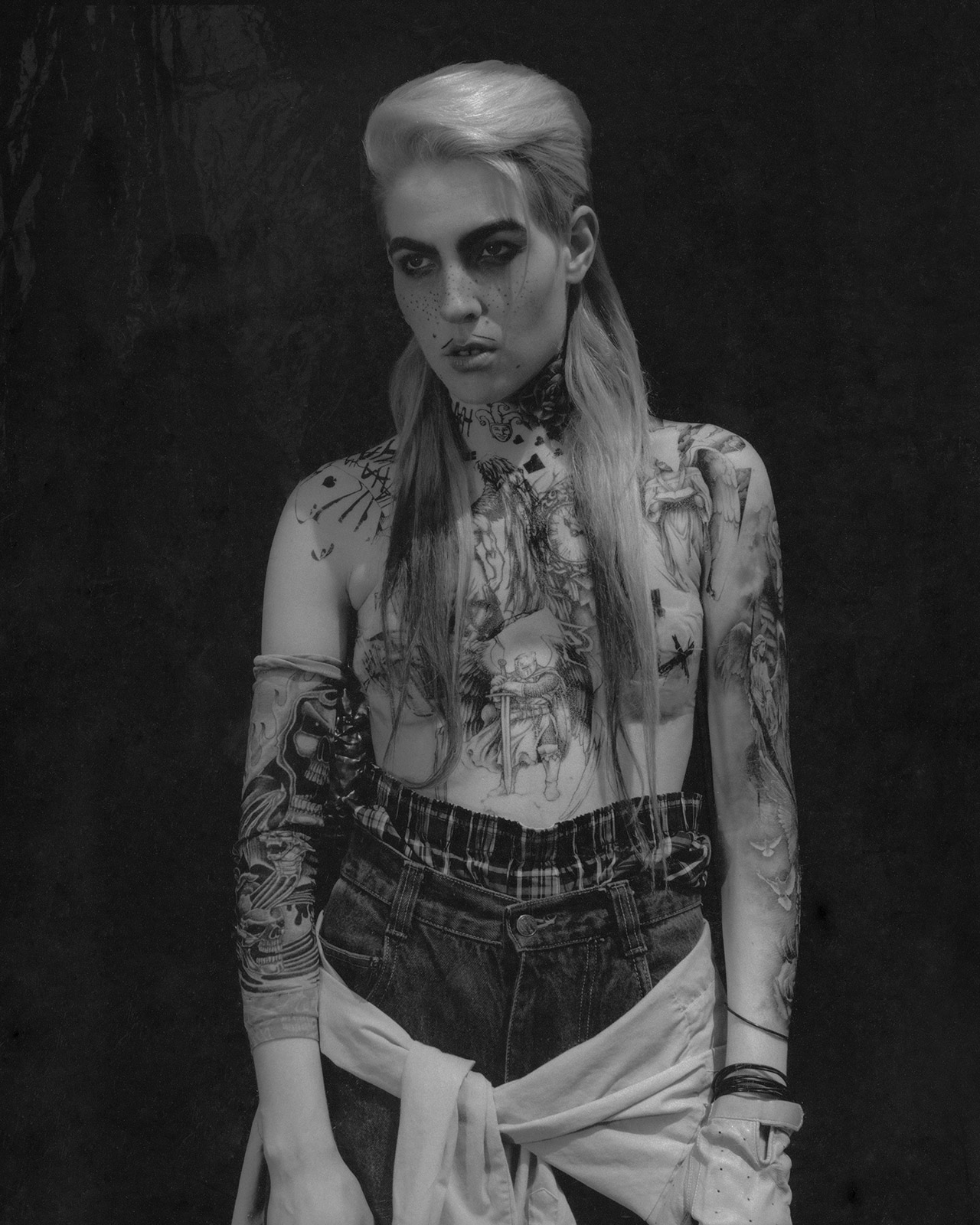 As for Electra’s current ideology, they’re hesitant to label themselves as anything after identifying so insistently as a libertarian at an impressionable age, although they’re certainly on the left: they want universal healthcare, wealth redistribution, to decriminalize sex work, and to defund the police. They still believe in abolishing the military and prison-industrial complexes, but they’re somewhat trusting of the government now, particularly community investment at a local level. “I hope that I can contribute positively and not accidentally contribute negatively,” they opine. “Can I convert people over to care about things that I think are important? I hope so, but I don’t know.”

It seems likely. Dorian Electra, after all, has created an expansive dogma of their own: a queer liminal world that has no rules, that knows no bounds, and we are invited to join the chaos and the spectacle of it, the magic and the madness.