Art from Isolation is a series Document Journal began at the start of the coronavirus quarantine in the US. The series presents artists of various disciplines who are processing and responding to this global predicament through their work.

In its first two installments, we heard from photographers, and video and multimedia artists. Today, we present 11 illustrators and animators who have visualized the emotions and anxieties of their isolated experiences for Document. We hope you enjoy the work and the words, and that you consider doing some creating of your own, through whatever medium comes easiest : ) 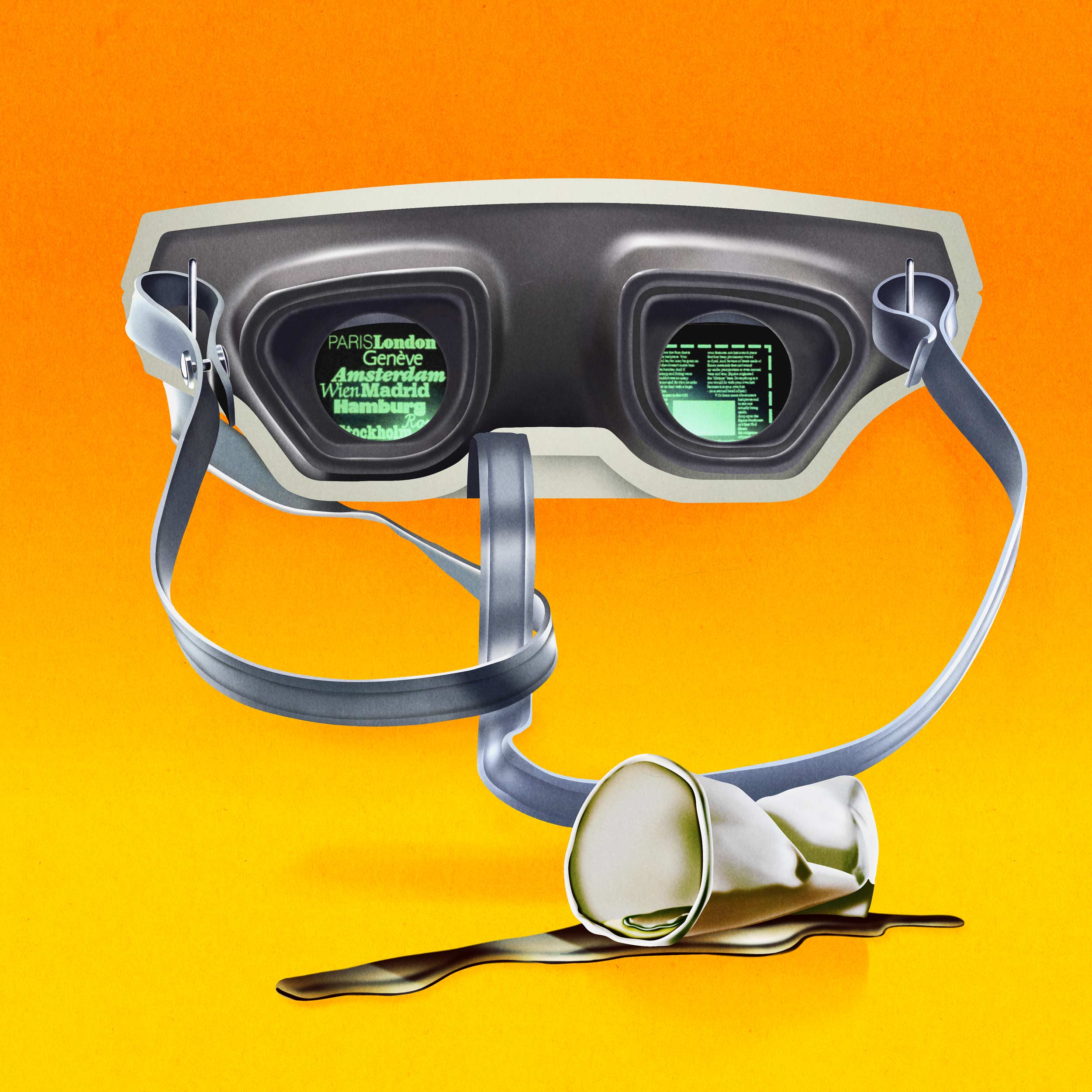 Two virtual-reality films at the peak of cyberpunk, Strange Days (1995) and Johnny Mnemonic (1995), were a reference point for the narrative mood. In Strange Days, illegal MiniDisc-like devices used to play back recorded memories offer an escape from one’s bleak reality. In Johnny Mnemonic, Nerve Attenuation Syndrome—a fictional disease caused by overexposure to technology—runs rampant in half the world’s population. [William S.] Burroughs said that language is a virus from outer space. In Johnny Mnemonic, which is shot in the wake of the AIDS crisis, we see parallels drawn between technology as an extension of our social membrane and the dissolution of that membrane as facilitated by technology.

I was also thinking of the Japanese Hikikomori, a class of youth who suffer from extreme social withdrawal from society. How would a cluttered capsule-apartment appear as a still life? I was inspired by the graphics of late ’90s European energy drinks, about the escapism of eXistenZ. A potential point where the physical body becomes an afterthought. 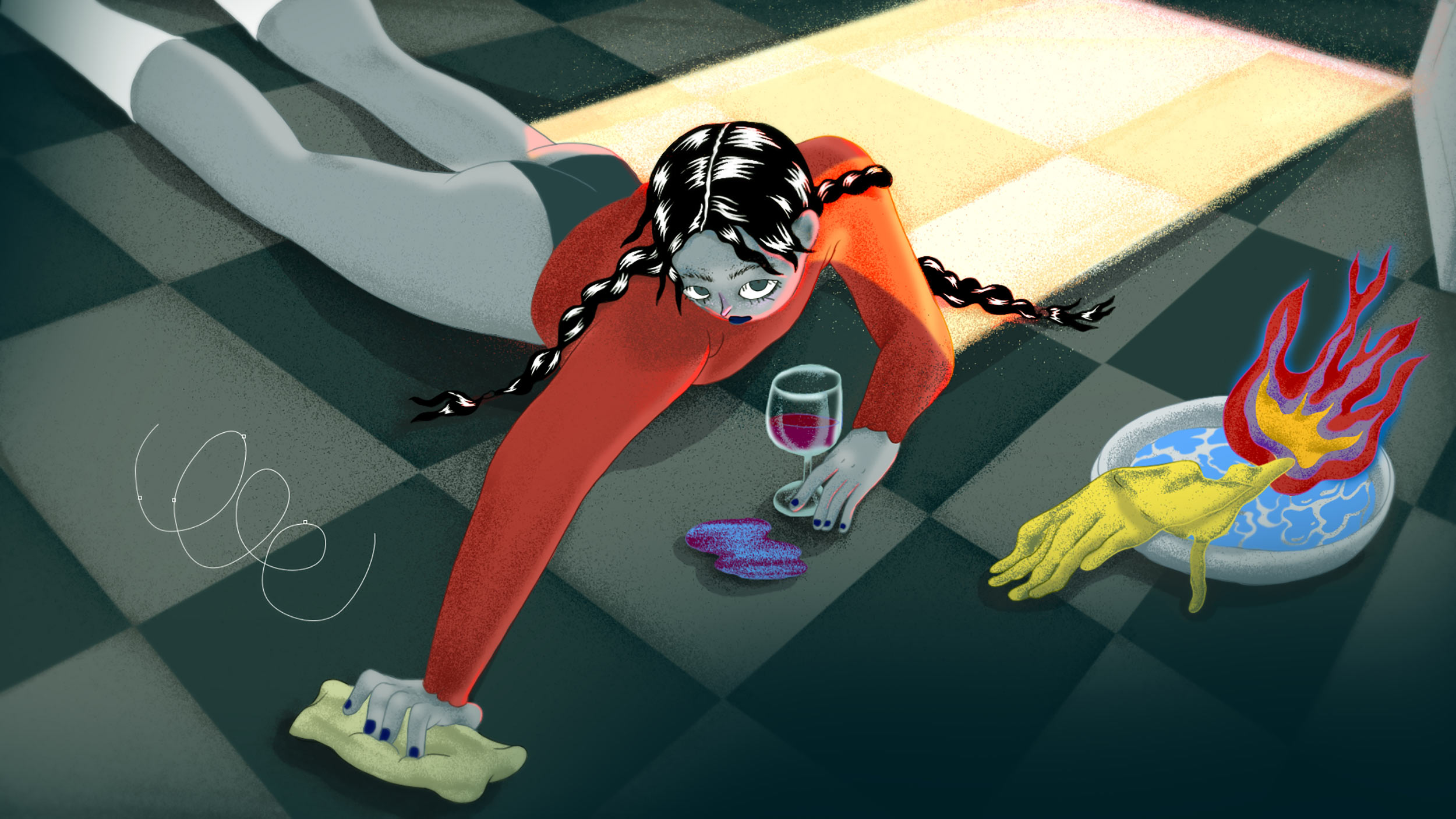 I have been exploring the contrast of stillness and motion throughout my work. This is a snapshot of a woman doing house work beneath hot sunlight beaming through her door. The perspective in this piece mimics the placement of a camera lens, anticipating her action. The wide angle composition gives it a sense of loneliness and emptiness. The wine in her hand suggests her time in this space is also enjoyable. Dark tones are employed to create a voyeuristic atmosphere and evoke the experience of surreptitious observation.

Electronic screens have become our window to the outside world. We look into our devices to peek at others while they are perhaps doing the same to us. 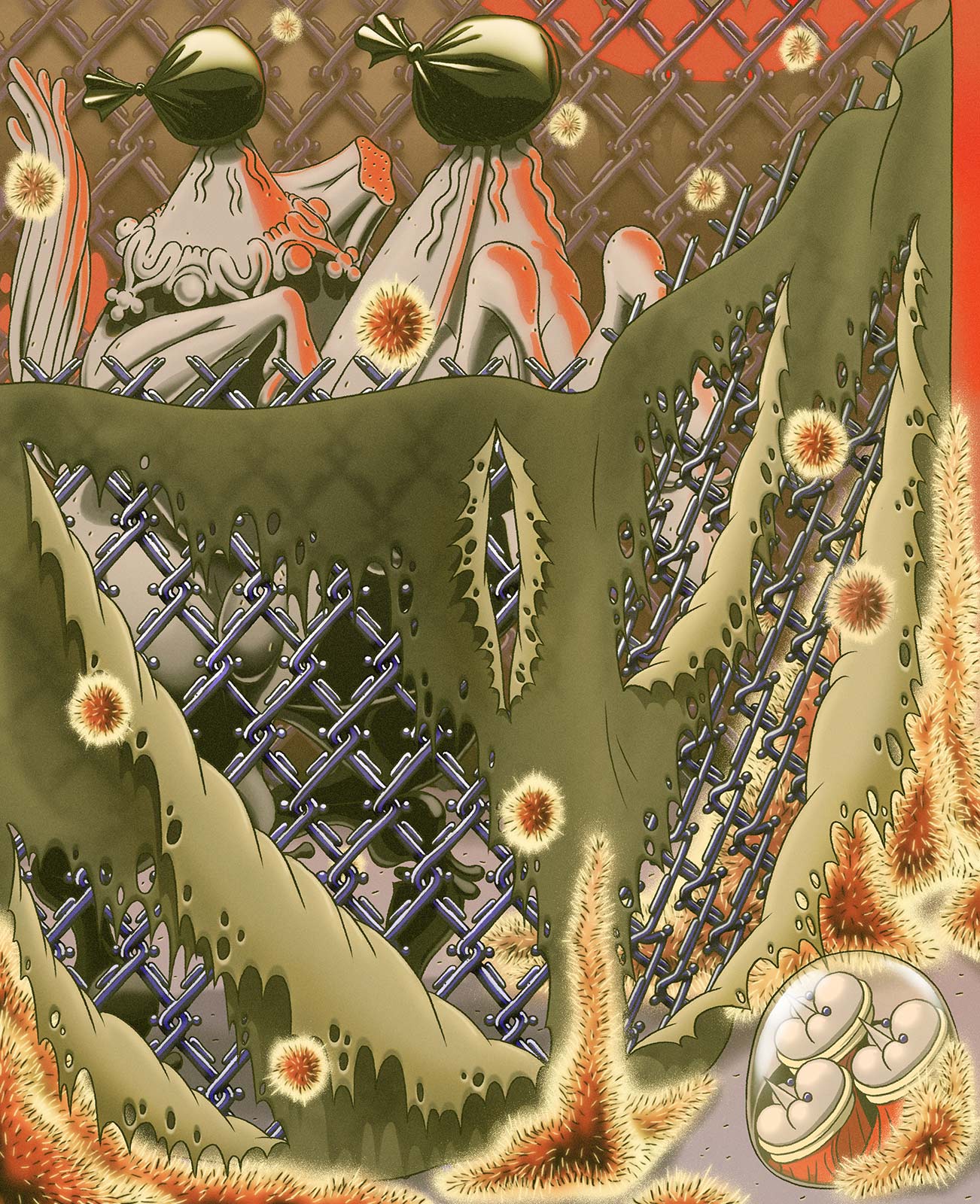 With the extra time available, I’ve started working on digital illustrations depicting little sci-fi tableaus that augment some aspect of contemporary events and culture. In this illustration I was imagining a spore-like contagion that’s driven human civilization underground, only to periodically peek at the surface they’ve abandoned to their past. I was interested in packing this little frame with mysterious layers of history. There’s a monument to some kind of conqueror figure but the monument has been vandalized or hidden from the public for some other unknown changing political tide. Making this piece in quarantine had me thinking a lot about not only being disconnected from other people, but also from history and the material artifacts that link us to a continuum of human civilization that we will probably lose to one cataclysmic event or the next. But how about this Spring weather!?

Cartooning is sort of a solitary practice, particularly because we cartoonists are poorly socialized as a rule. Because I can’t really work with anyone on these—I submit a batch of 5-10 cartoons to the New Yorker every week—I really enjoy working next to other people. I’m lucky enough to have some other freelance friends nearby to create a kind of co-working community with, which has made this isolation particularly hard on me. I’m still producing, but I get really burnt out and low when I’m working alone all day. I’m trying to get by on FaceTimes and Zoom calls but it’s just not the same. I never knew an introvert could have these kinds of feelings!! 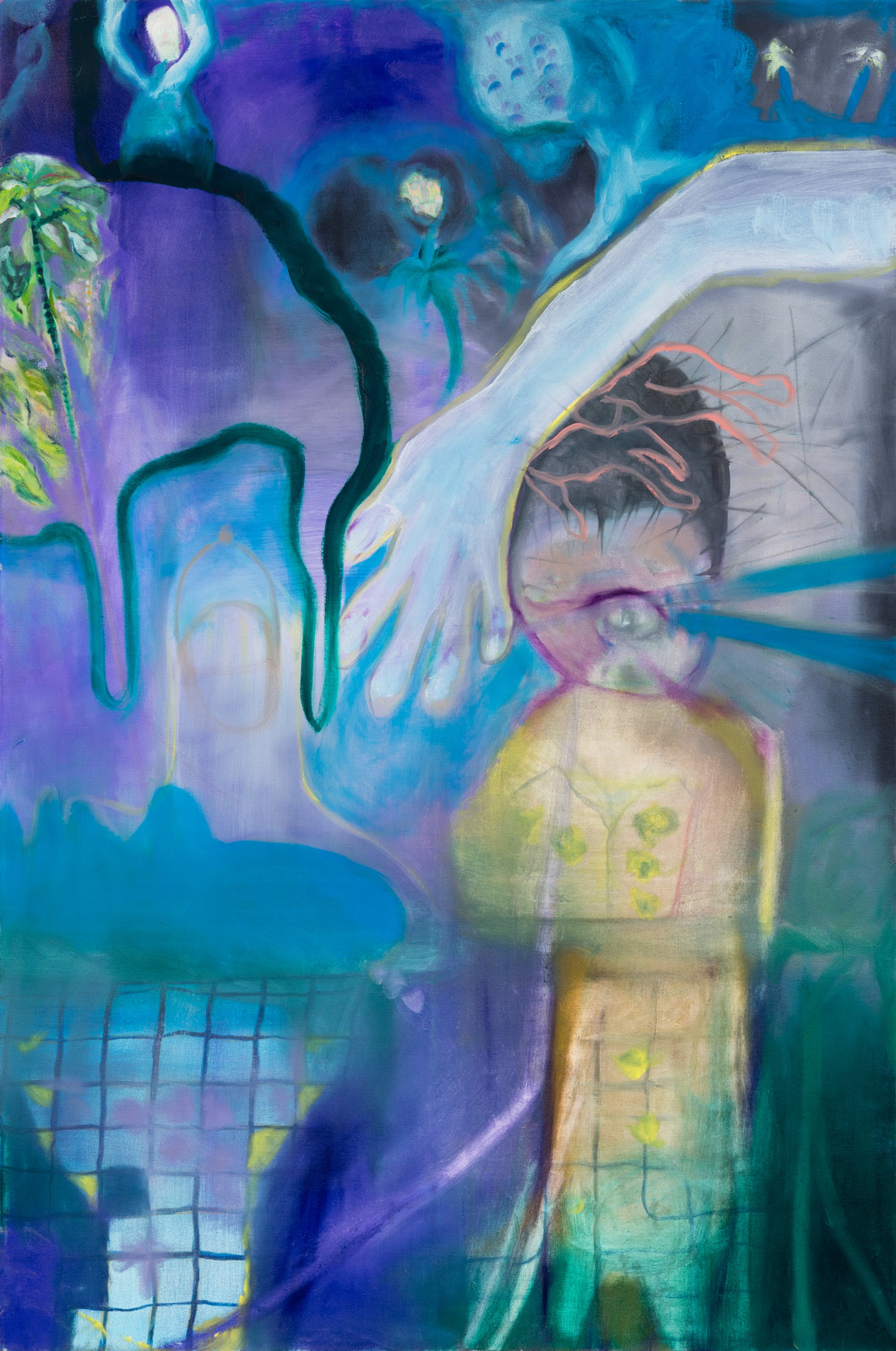 My pictorial work is intuitive, process-based, and sensorial. In this work, I aim to connect to the genocidal memories of my grandparents. I liken this genocide to a burden, with an inability to escape from it. By engaging with the past, its spectres are brought into the present through my work. My painting process involves being guided by ghostly strokes. As the diaspora knows why it has been born away from its homeland, this longing—or as Freud termed it, melancholia—has surfaced in my work, symbolizing a devotion that has not been resolved. By keeping an open relationship with the past, melancholia has the ability to form new perspectives on something that has become lost.

I find myself revealing fragmented bodies and grotesque forms willed into existence by vigorous and wildly colorful brush strokes. I am interested in ‘uglifying.’ This iconography of the grotesque enables me to comment on the injustice. I flatten out the figures across the surface of the composition, built in order to make the image more pressing and intense. Volume is suggested through the juxtaposition of dabs of pure, saturated color as figures, shapes, and forms are deconstructed, on the brink of solidifying or dissolving as a memorial and political act. 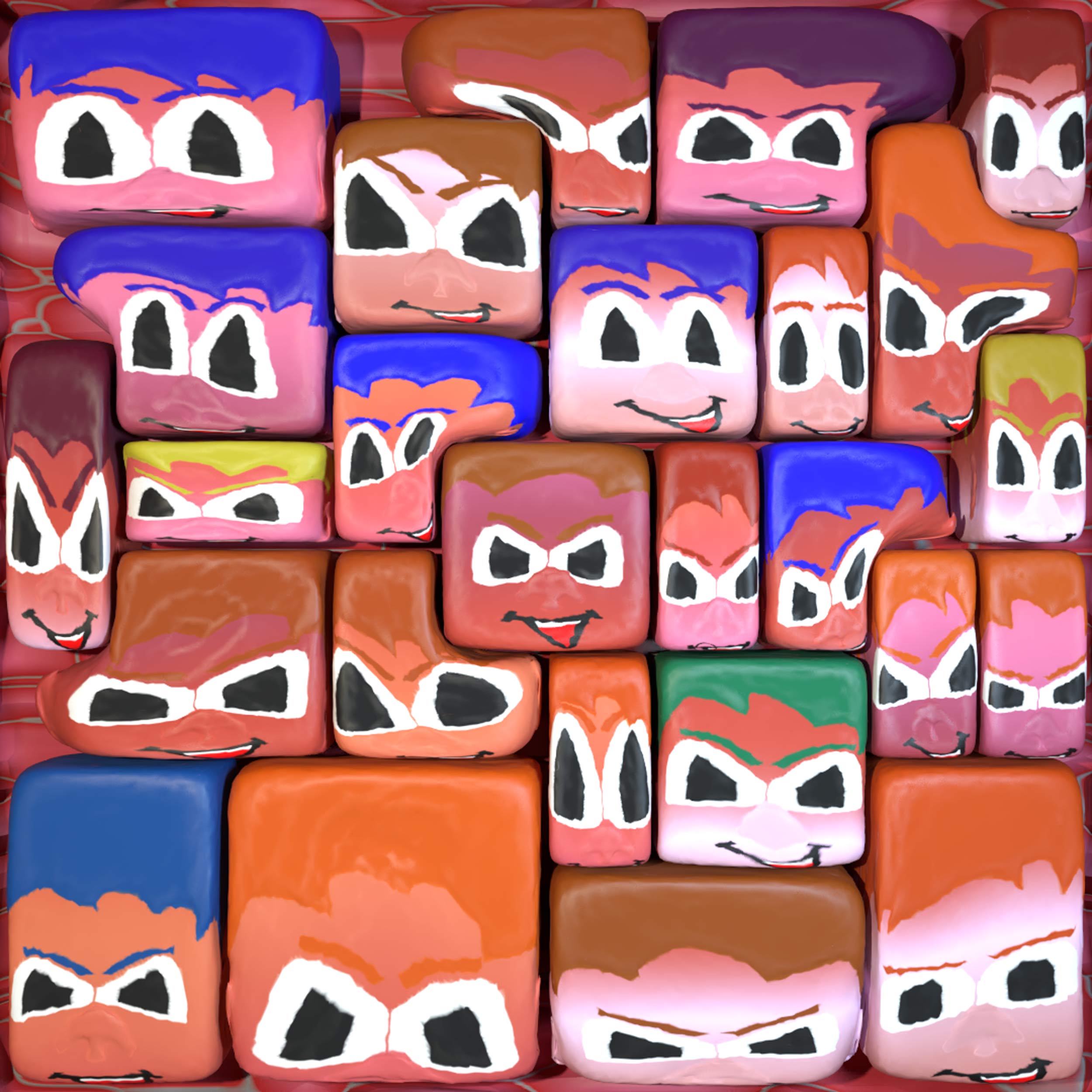 This piece started from my procedurally generated face that I built some days ago. The main idea behind Houdini, the software I use, is proceduralism. This means that instead of making a cake from scratch, you build a recipe and then let the computer do it. This allows a lot of possible variation and I think it’s great for art directing too!

Normally I work alone and I like it. I can work when I want and organize my schedule as I need. When I work with others it’s remotely because I live in a small town in the French alps so there is not much of an artistic scene here… all of my artistic contact comes from the web.

Isolation is important for me. It was during an isolation period when I was depressed and self-deprecating that I understood I was obsessed by the idea of producing images and I decided to build the rest of my life on this single task—because at least I had a goal. 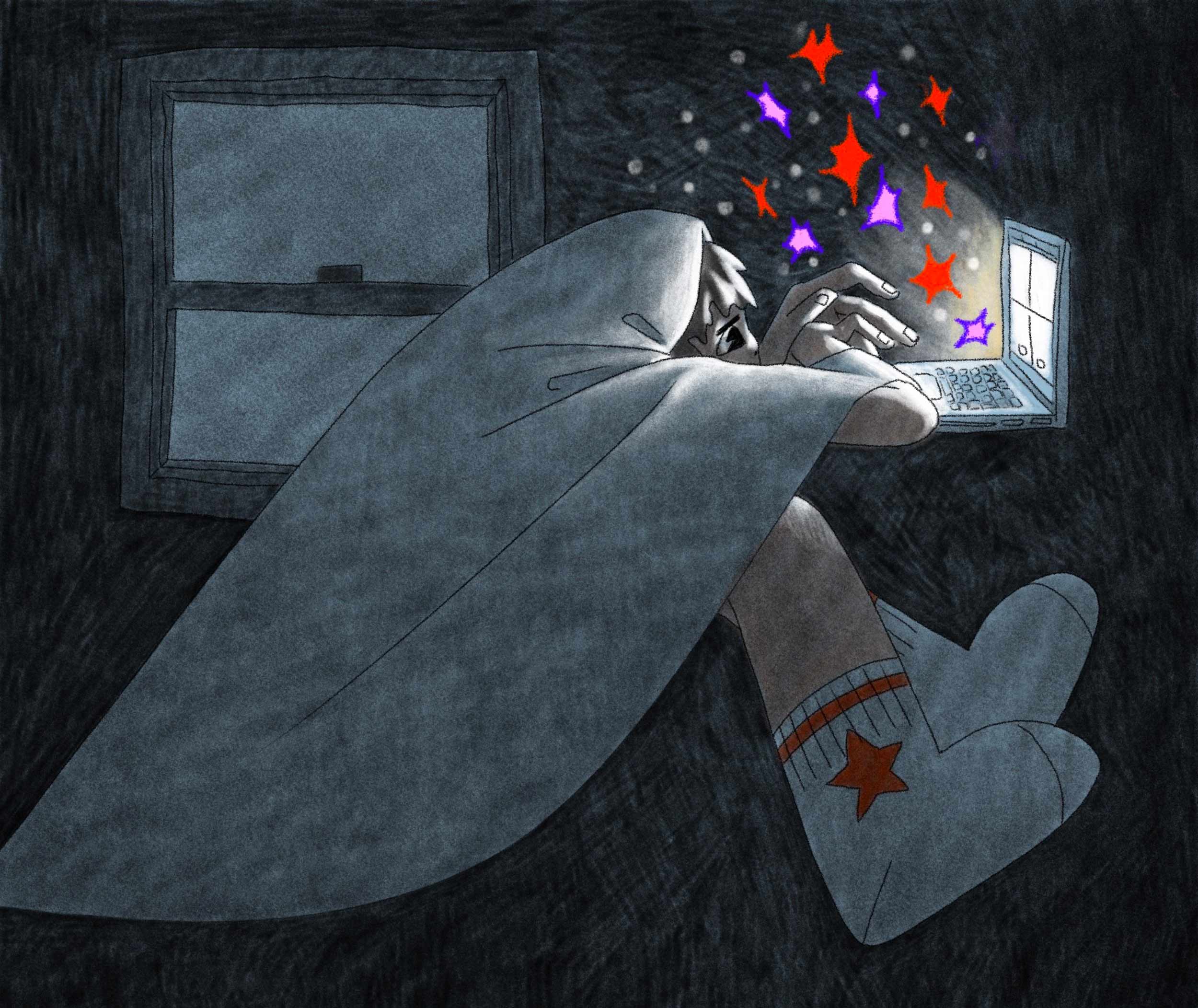 [This work is] a pretty literal interpretation of physical isolation at least, and the emotions that come along with it. My sleep schedule has been absolutely ruined so I spend a lot of time at 4-5am by myself in the living room in the dark on my computer, talking to friends, working on something, or playing video games. It’s difficult in many ways, and the pressure and grief of the pandemic, of the unemployment rate, of racism, threaten to overwhelm me, so I keep it at bay by distracting myself and doing whatever I can to continue to function. Those little things, small projects, cooking food, talking to friends, are so vitally important right now because they help us get by, so that’s what I decided to draw.

My desk is a disaster: an orange plant that takes up a third of it, a zine shelf takes up another third, and the last third is piled high with books, 1099s, receipts, and empty food packaging so I don’t even bother. I’ve been working on my iPad in the living room on a beige couch that is on the last legs of its life. It has three pillows on top of it and a yellow knitted blanket. As soon as you sit down your butt will be pulled towards the center and be sucked into the crack so usually I end up curled up in a position that is definitely bad for me. The couch is by a window, surrounded by a lot of plants, both hanging plants and big ones with leaves that get in my face if I lean on one side. 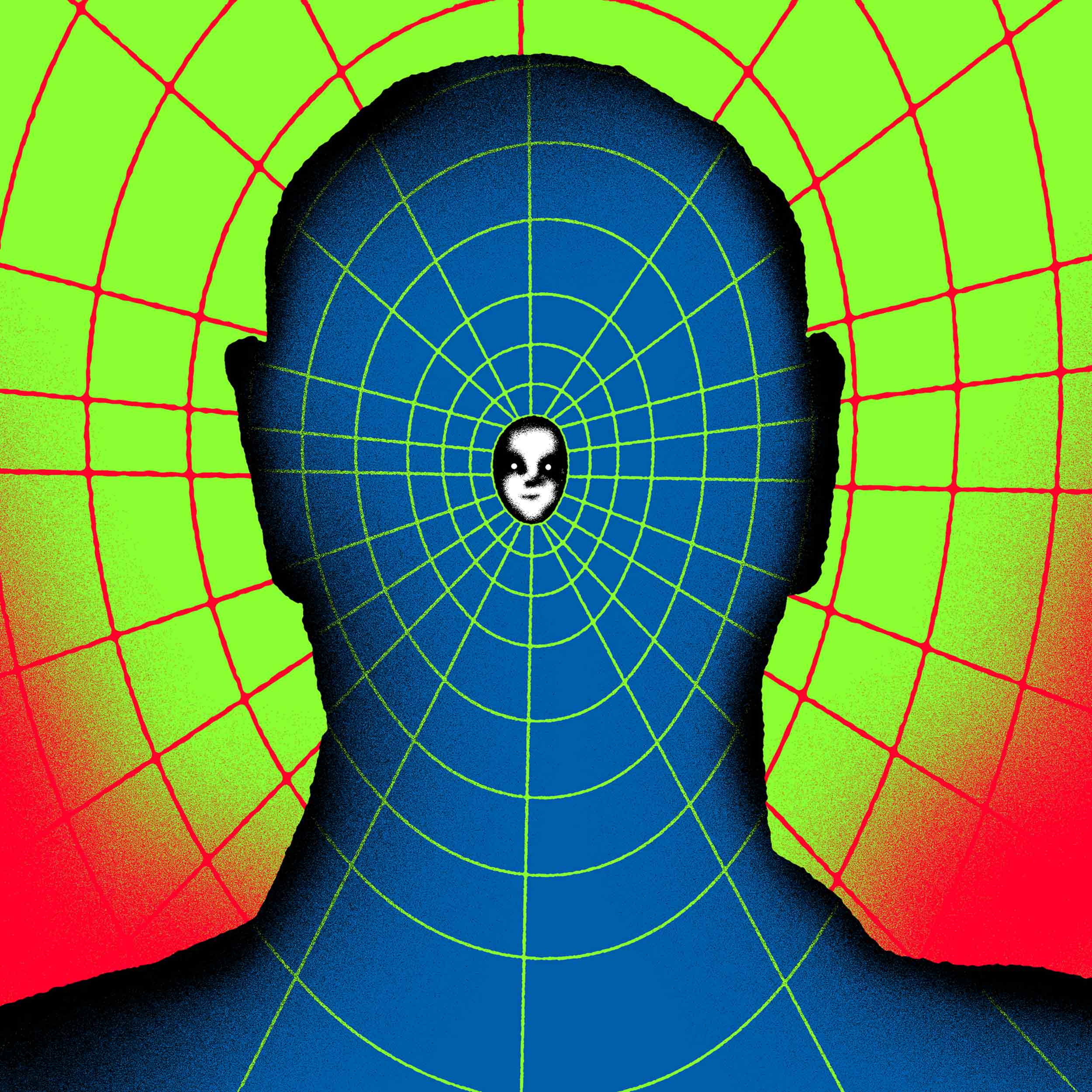 I wanted to emphasize the idea of distance emotionally and physically. I feel like my world is slowly detaching more and more from reality but I am trying to stay positive.

I have been doing a lot of ‘crafts’ lately—[my wife and I] made beads, I have been playing with Sculpey and wood carving, and I started a new series of illustrations based on the food I have been eating. In that way, isolation has opened up some new directions of work that I would have normally dismissed. I think embracing the limitations that are out of your control can help you make work that is unexpected and fresh. 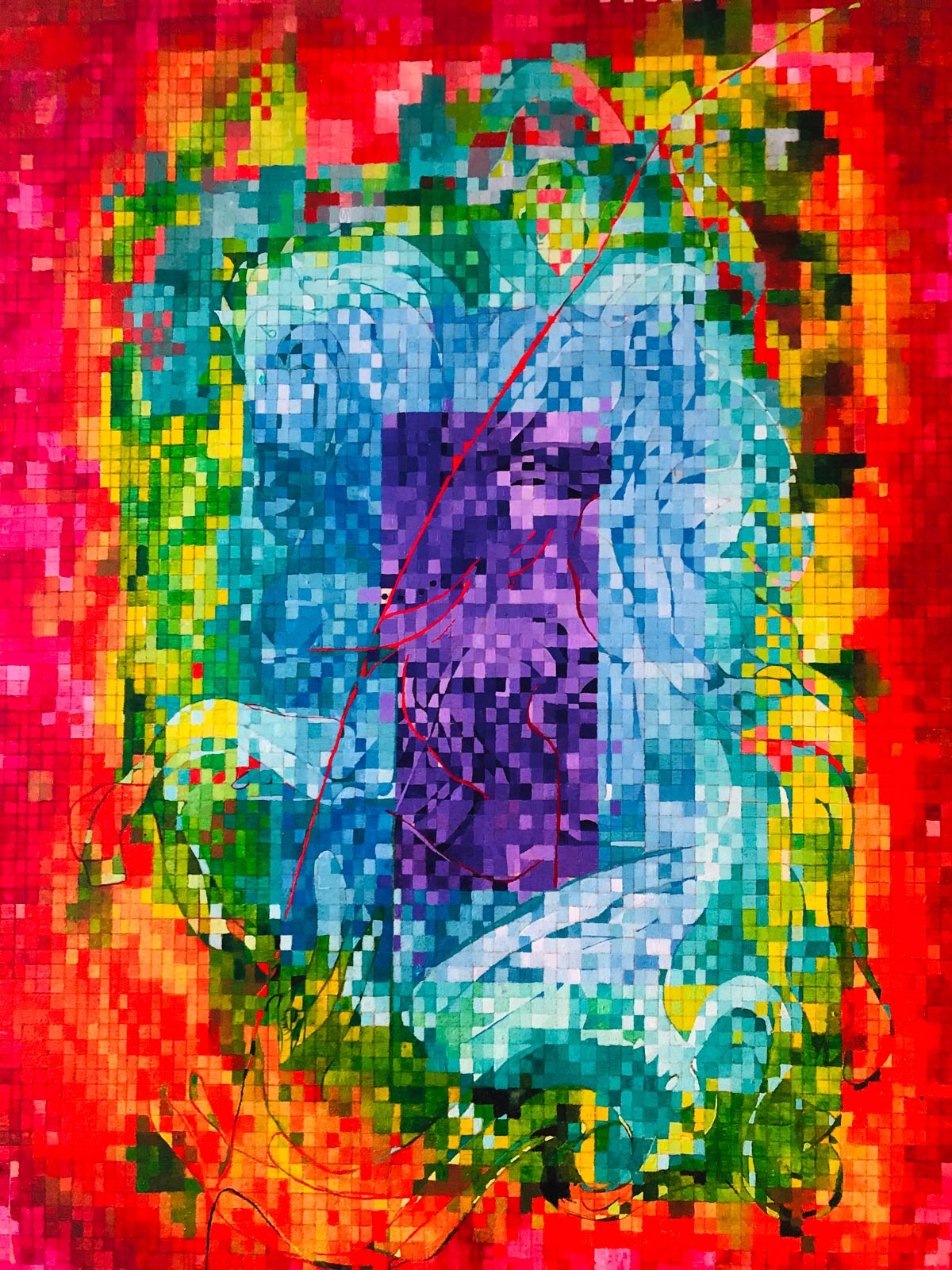 Saint George and the Dragon is a theme upon which I have composed many paintings during a span of over a decade. Its iconography has been the source of healing, strength, and self-revelation during my personal and artistic evolution. This abstract rendering focuses on patience and abundance. An understanding that form can create chaos and how we defeat our own personal battles.

[Aside from making art,] I’m giving myself the freedom to cook more often and talk on the phone with friends for long periods of time. I’ve also been meditating everyday and running around my local cemetery. I’m really trying to maintain a form of structure so that I don’t fall into a realm of sadness. 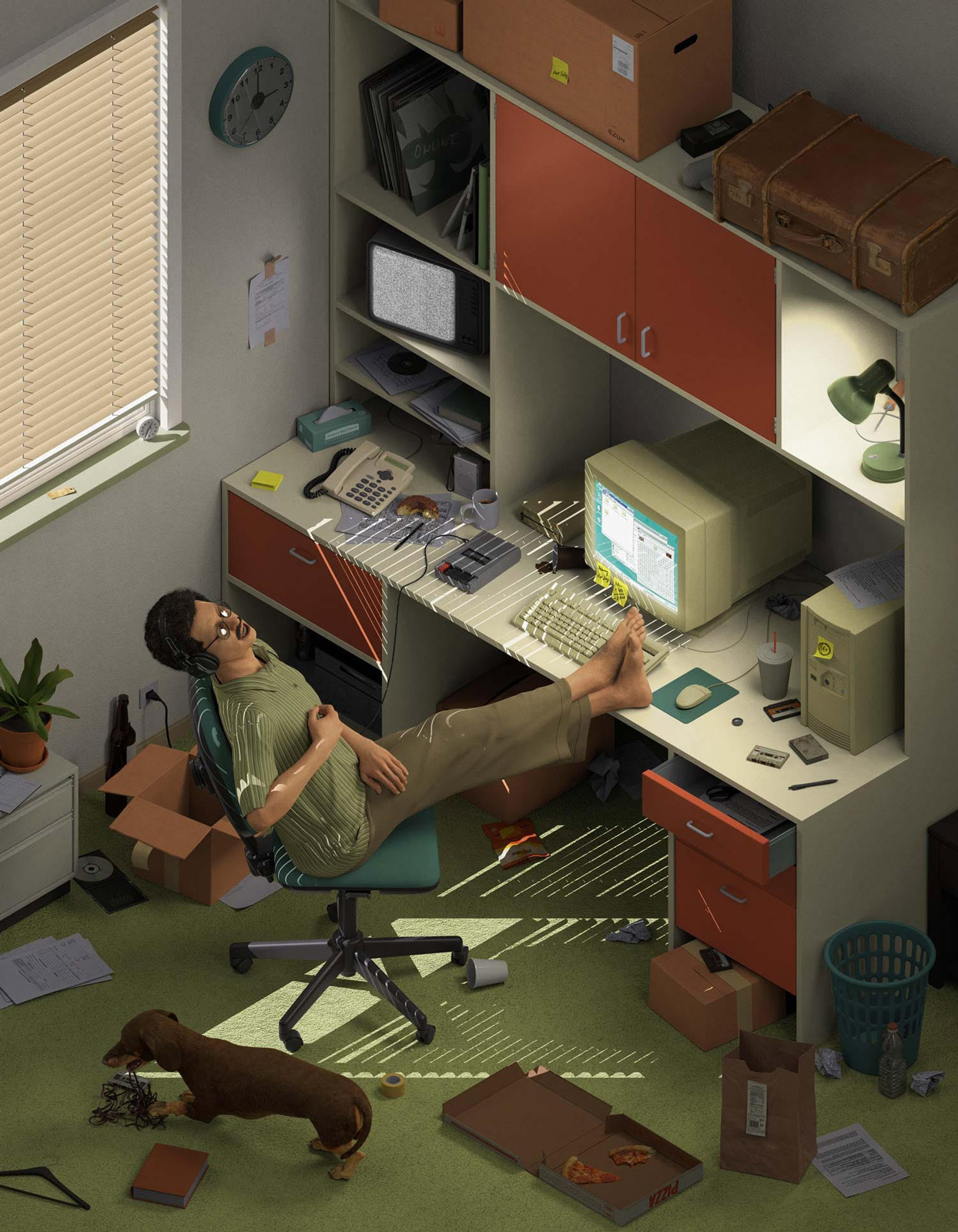 “The Hermit’s Chamber” by Max Guther.

Normally we would probably be sitting in the sunshine or in a bar sipping from some kind of refreshing drink right now, surrounded by people. While scenarios like this are ceasing to apply, we’re trying to teach ourselves in isolation. There are a lot of things we currently miss with good reason however, these occurrences can be seen positive in some way. Facing a time where it feels like the world and everything in it has been pacified, we have to stop chasing around and deal with ourselves, listening to music and reading books, sitting on the desk and laying on the couch, or just being bored at times. Moments of self-reflection which contain a huge source of inspiration. 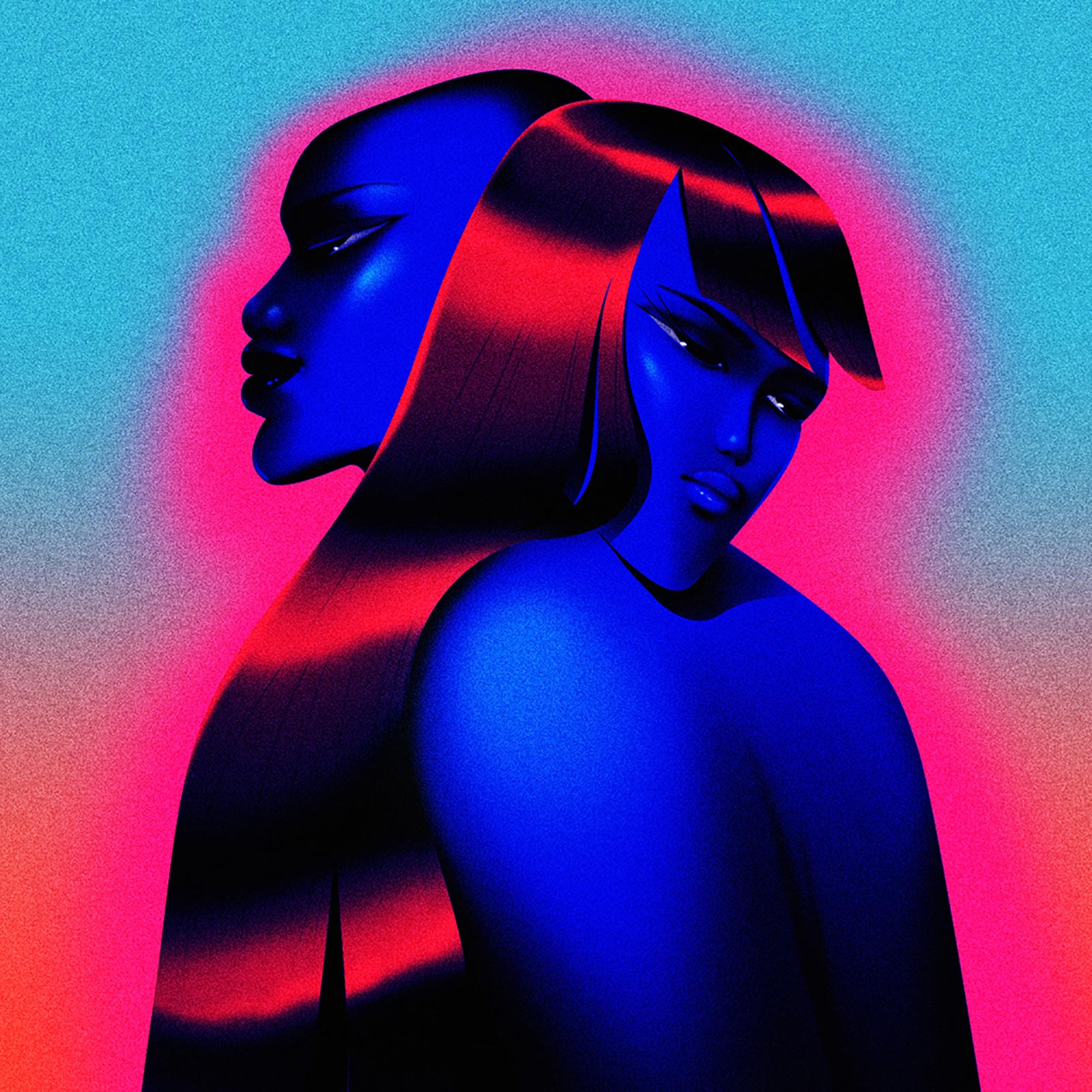 [Isolation] can be [a catalyst for creativity] if you are open to it, because it gives you a moment to sit with things. Being creative and making things, can be one way to process what’s going on and how you feel. It’s also a way to connect with others too, since we are all going through it.

I’ve been cooking quite a bit, much like everyone these days. More specifically, I’m making foods I grew up eating as a child. My mum gave me all these Indian recipes, and I’ve been making them on the regular, exclusively. There’s even little treats I used to indulge in as a child (srikhand, fatayer, and shfeeha) that I’ve started making from scratch. This is one big source of comfort, and a little reminder of the last time I was safe.

I’m not much of a bread person so I won’t be making sourdough anytime soon, but I’ve been making yogurt from cans of coconut milk that requires just as much time to ferment. The anticipation to see if it turns into yogurt or not is the most exciting part of my week.

I went freelance a week before all of New York went into quarantine, which means to say I started my own lockdown early. My apartment has always been more geared to work than living. But since I’ve been cooped up in here, I bought a few plants to keep me company, I’ve been growing scallions and rearranging all of my things constantly trying to find some semblance of optimization.