Just a century ago, European imperialists occupied nearly 90% of Africa, subjugating the continent to a ruthless system of oppression, exploitation, and genocide. In Namibia, the Germans perfected concentration camps they would later bring to their own lands, while the Belgians exacted a holocaust in the Democratic Republic of Congo that resulted in the death of eight million people. Borders were drawn without respect to the native populations, while natural resources were stripped from the land at deafening speed. It wasn’t until World War II, when Ethiopia drove Italian settlers out, that the tide began to turn and the African Independence Movement was born.

During the 1950s, ’60s, and ’70s, dozens of African nations freed themselves from the pestilent grip of European colonization with Zimbabwe being the last to achieve liberation in 1980. Yet, even as Africans expelled foreign powers, a new plague took hold in the form of neocolonialism. French philosopher Jean-Paul Sartre first used the term in a 1956 rally for peace in Algeria to describe a system of capitalism, globalization, and cultural imperialism used by so-called “First World” nations to control rather than develop former colonies.

A decade later, Kwame Nkrumah, the first Prime Minister and President of Ghana, made it the subject of his 1965 book, Neo-Colonialism, the Last Stage of Imperialism. Upon the book’s publication, the U.S. State Department was so enraged, they immediately performed a textbook act of neocolonialism, cancelling $25 million of American “aid” to the fledgling nation. “Neo-colonialism is also the worst form of imperialism. For those who practice it, it means power without responsibility and for those who suffer from it, it means exploitation without redress,” Nkrumah wrote. 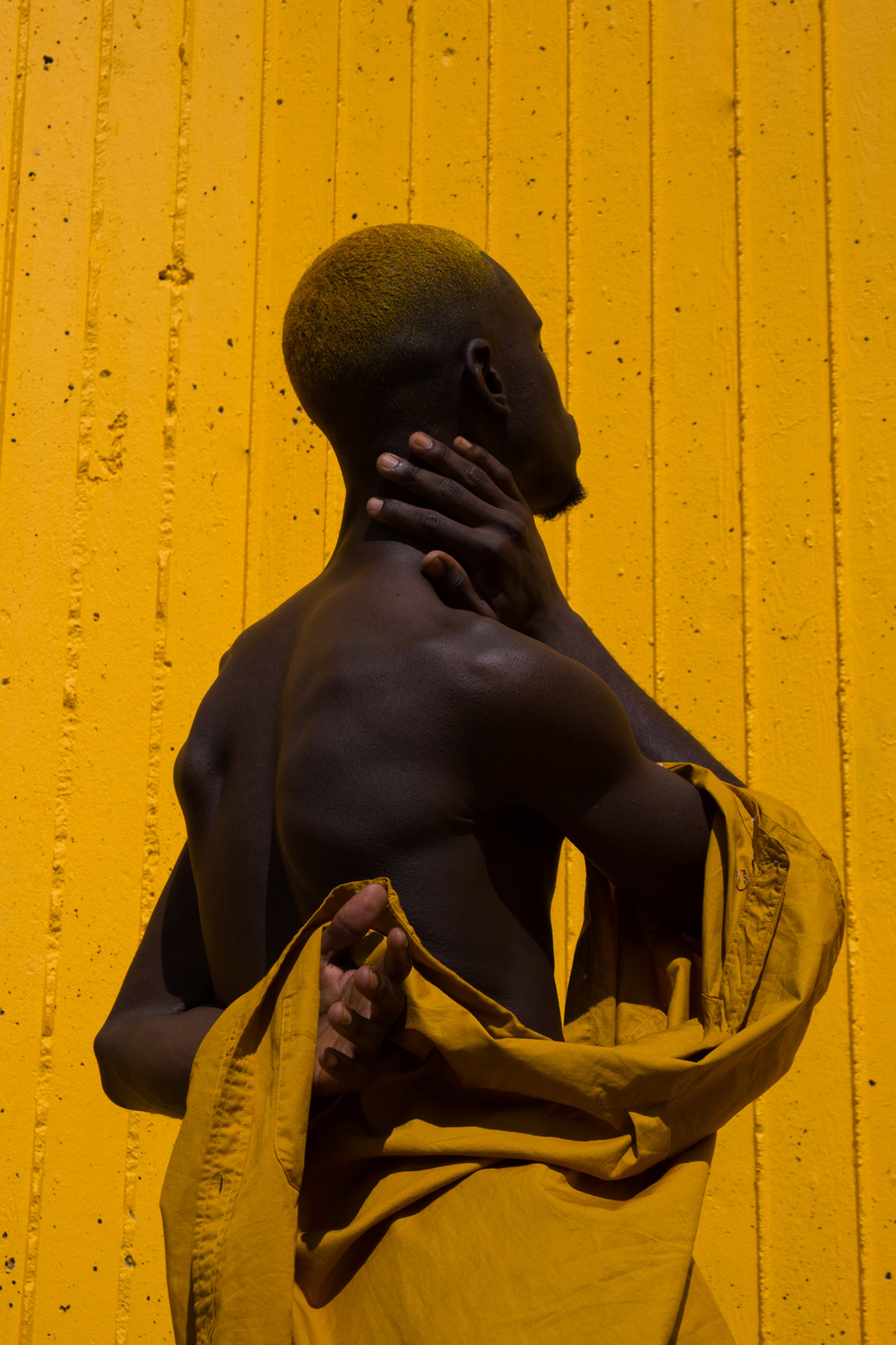 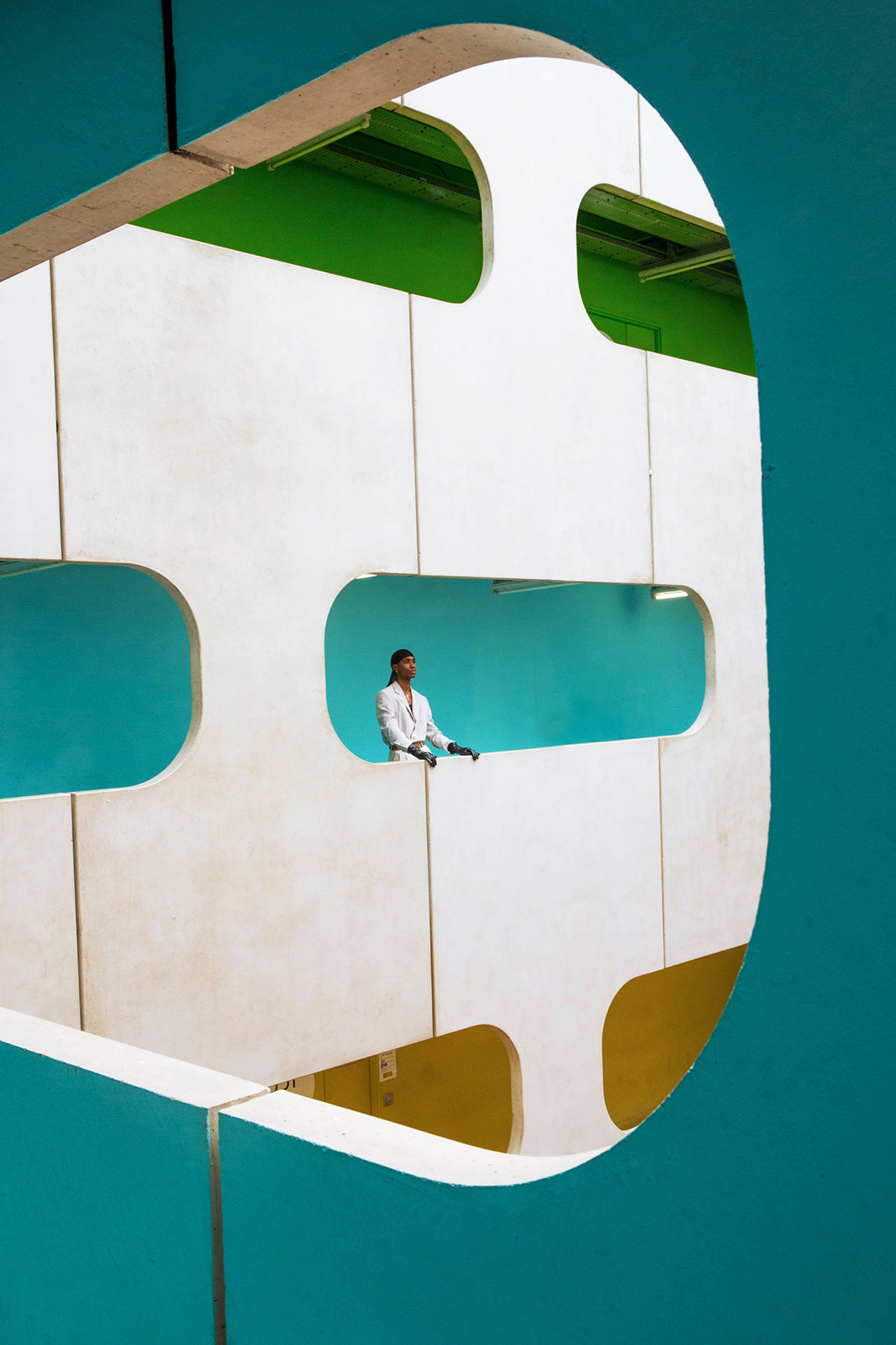 Today, a new generation of Africans are fighting back, preserving the revolutionary spirit of their ancestors by using art to control the narrative. “The issue is that everyone across the globe is indoctrinated from birth by Western culture, especially children in Africa whose ideals regarding happiness and success are directly informed by the Western media they consume,” says 24-year-old photographer Yannis Davy Guibinga.

Born in France, Guibinga moved to his parents’ native Gabon at age one, where he lived until graduating high school in 2013. He moved to Toronto that year, then Montréal in 2017, only to discover that Canada’s claim to being a liberal paradise was completely unfounded. “The most significant culture shock for me was the identity shift from being a regular member of a society to someone who is othered,” Guibinga says. “Thankfully, I have met many other people here [who] share the same or very similar experiences, and a number of them ended up becoming my photography subjects; that made the transition and living away from home a bit easier.”

Guibinga originally took up photographing in high school as a hobby with some friends, and it quickly became an activity they would do on weekends to entertain themselves. Guibinga tapped into his childhood memories of his mother’s fashion magazines while drawing inspiration from Mert & Marcus, Malick Sidibé, Seydou Keïta, and J.D Okhai Ojeikere to develop a style of portraiture and fashion photography that embraces African aesthetics at its core. 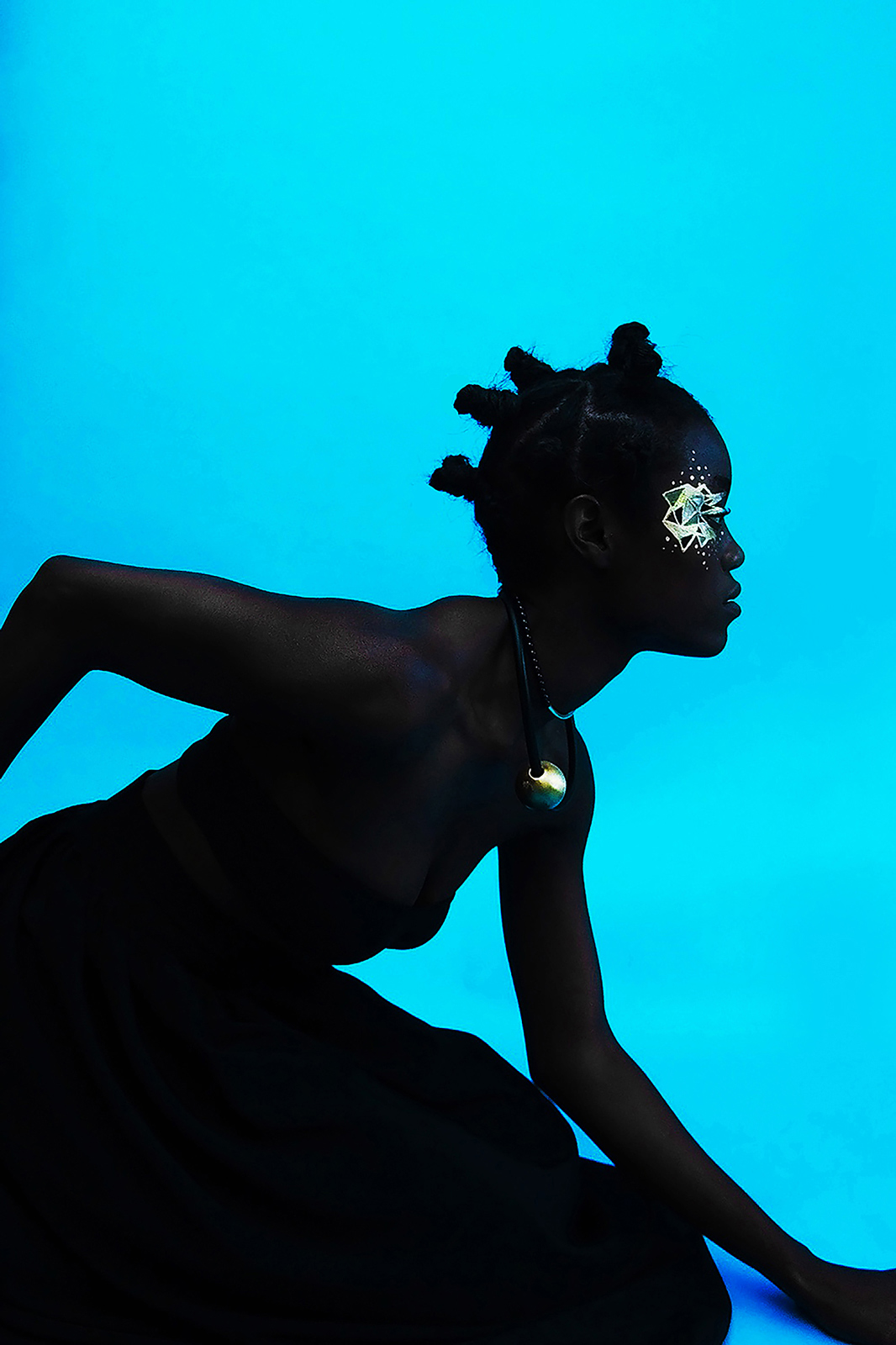 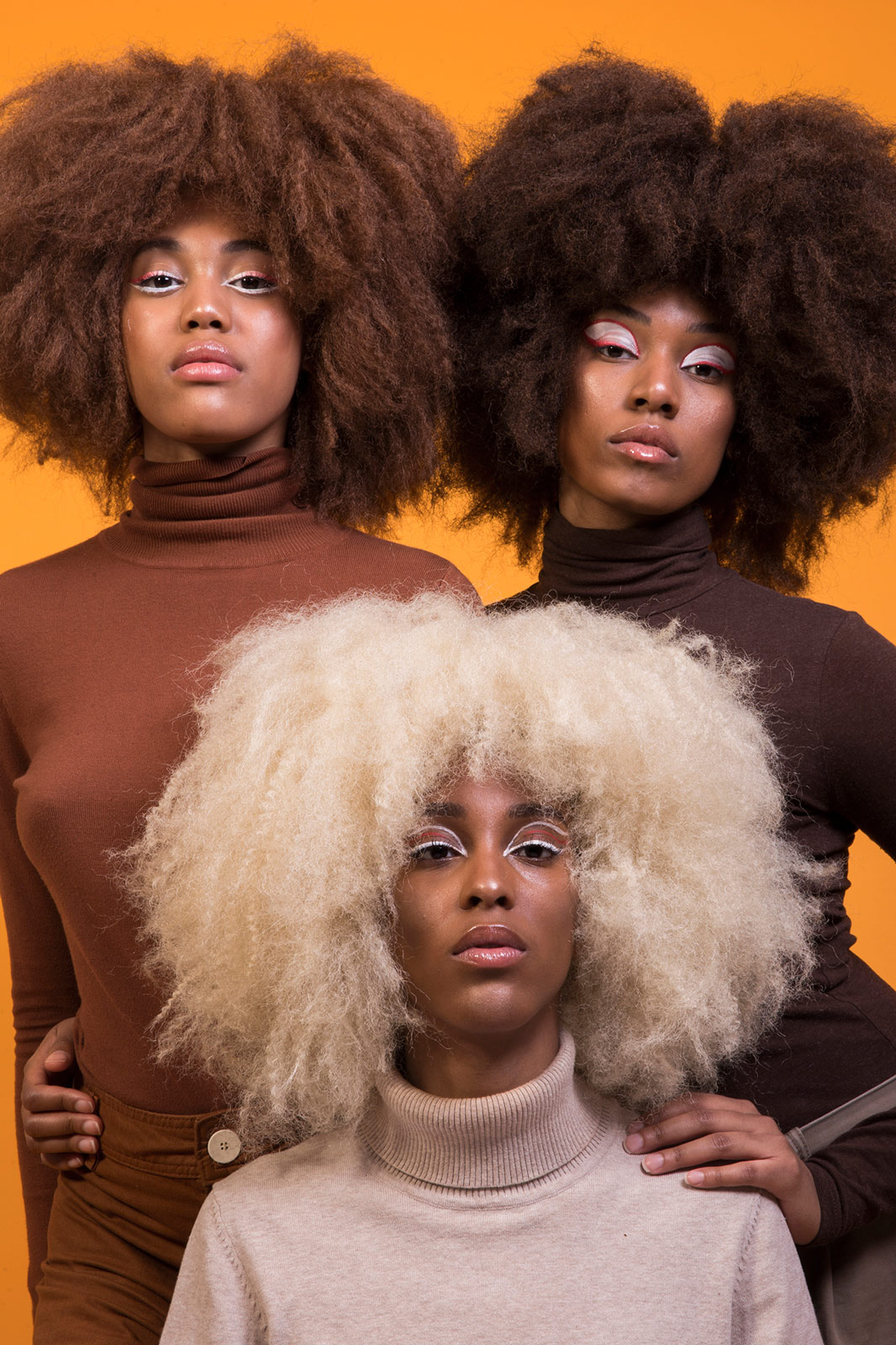 Since its invention in the mid-19th century, photography has flourished in Africa, although it was originally used as a tool of propaganda by Western imperialists. “The history of photography in Africa is complex because it was introduced by colonial photographers who had very specific agendas to depict the continent as an underdeveloped land in need of guidance,” Guibinga says. “This agenda created an image of the continent that the rest of the world thinks is still accurate to this day. Thankfully, many African photographers have been doing the work to depict their people and communities in the most authentic and accurate way, with all their beauty, grace, and sometimes flaws.”

Guibinga keeps this history alive in his mind when creating work, pairing it with his experiences as an African who grew up on the continent and now lives away from it, to use portraiture to highlight his culture and communities on their own terms. One of the central features of his work is the bold use of color to underscore the significance of its meaning in events and rituals. By combining color with hair, make-up, costume, models, and locales, Guibinga creates a link between contemporary African identity and the traditions of the past.

“Art can be a way to assert independent ideas and aesthetics because it is something that is accessible to everyone,” Guibinga says. “Art allows for every voice to be legitimized and have a chance to be heard and to assert one’s independence and self-determination. Artists and thinkers like Djibril Diop Mambéty, Ousmane Sembène, and Thomas Sankara have used their voices to incite African people to assert their identities and be proud and independent contributors to the world.” 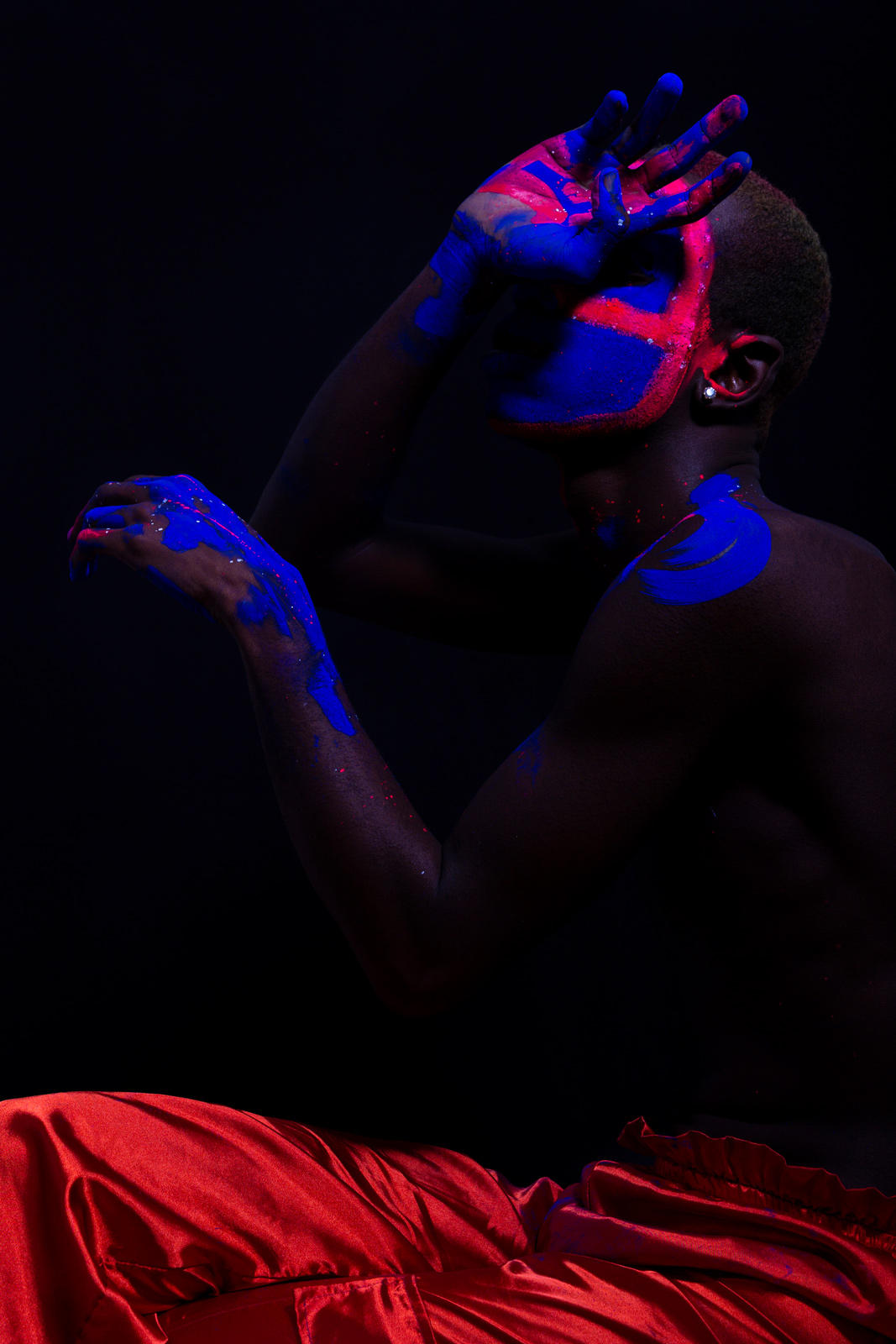 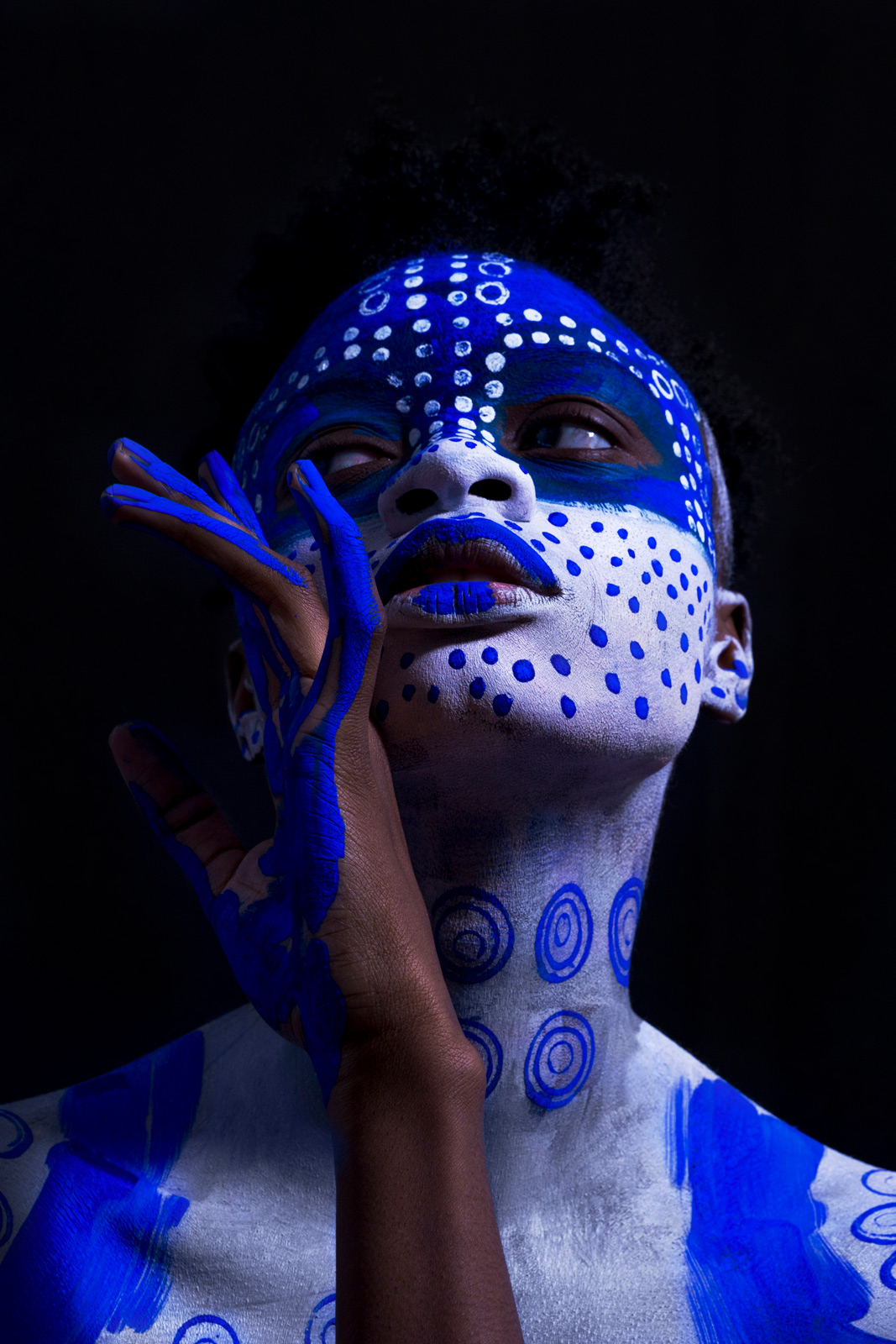 In his subjects, Guibinga finds ideas. “Most of the bodies of work I create start with the idea of what I want to explore first,” he explains. “I then try to build the rest off of that by thinking of what location, light, colors and kind of subjects would fit best to drive the message forward the most efficient way possible.” In the never before published series, Pigments, Guibinga pays homage to the art of African body painting present in many cultures in East Africa, especially the Mursi and Surma tribes of Ethiopia.

“I collaborated with the makeup artist Amal Afoussi to help me create the images,” he says. “Because I wanted the photo to focus on the bodypainting, the background and lighting were deliberately chosen to highlight this specific part of the image. I added African jewelry with colors complementary to the ones painted on the model to add even more color and contrast to an otherwise dark image in order [to] create a strong image with a clear message and point of focus.”

For Guibinga, photography is a revolutionary medium that allows artists to bridge the present and the past to create a new future. “Photography can be a tool of independence because it allows people to tell their own stories on their own terms and in their own ways,” he says. “They are able, without any third party or anyone controlling their voices and messages, to share their visions of the world they live in with their own authentic voices.” 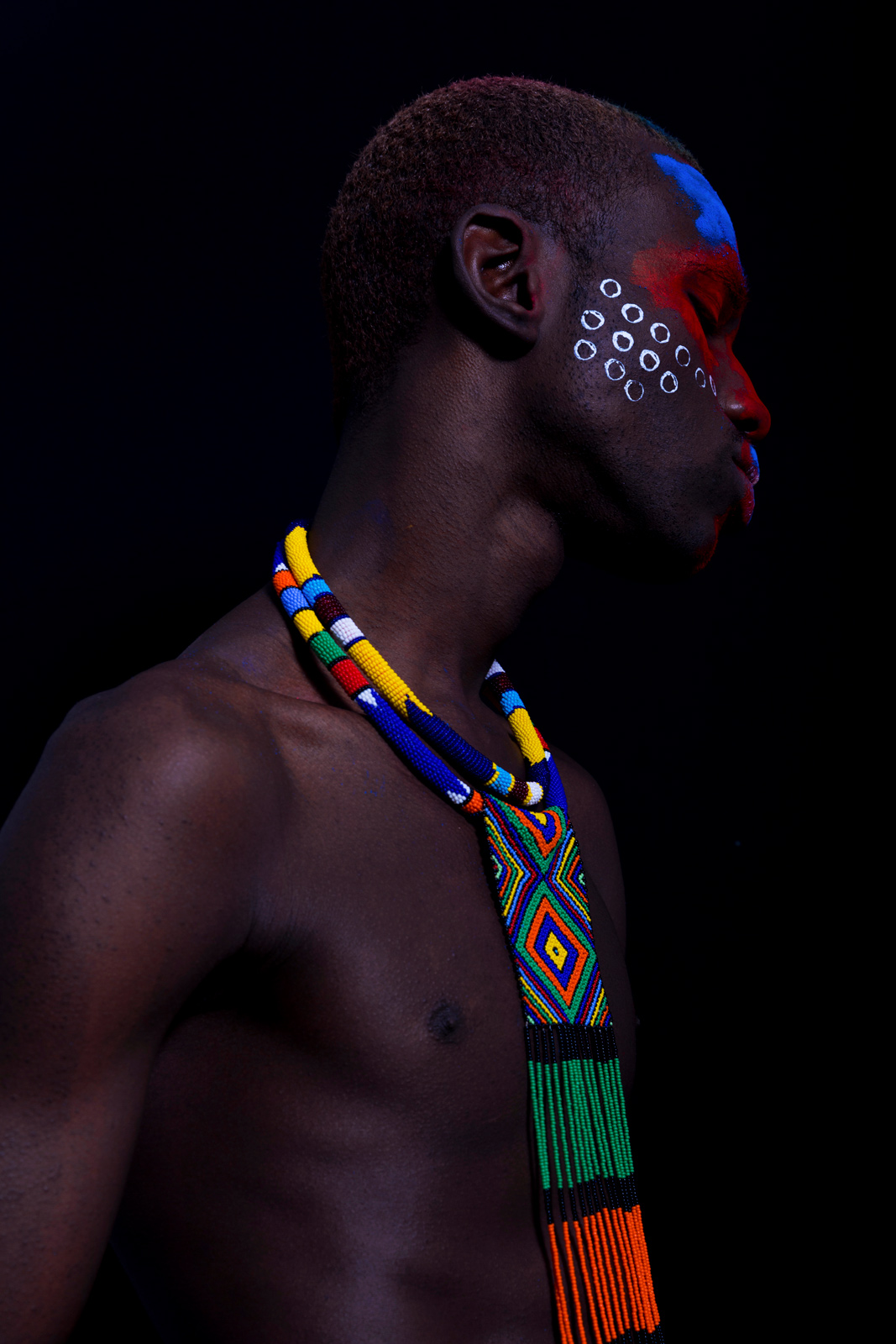 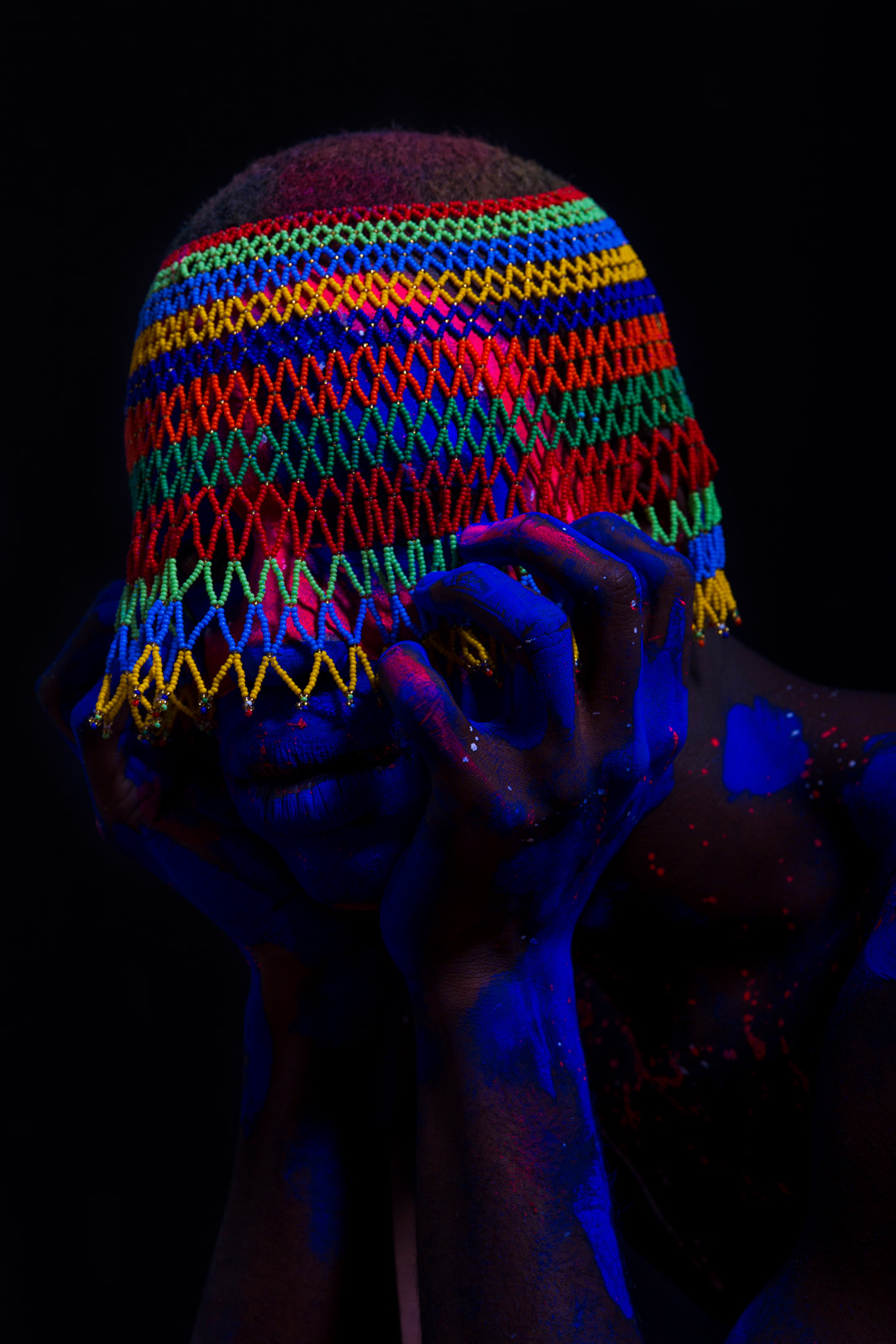 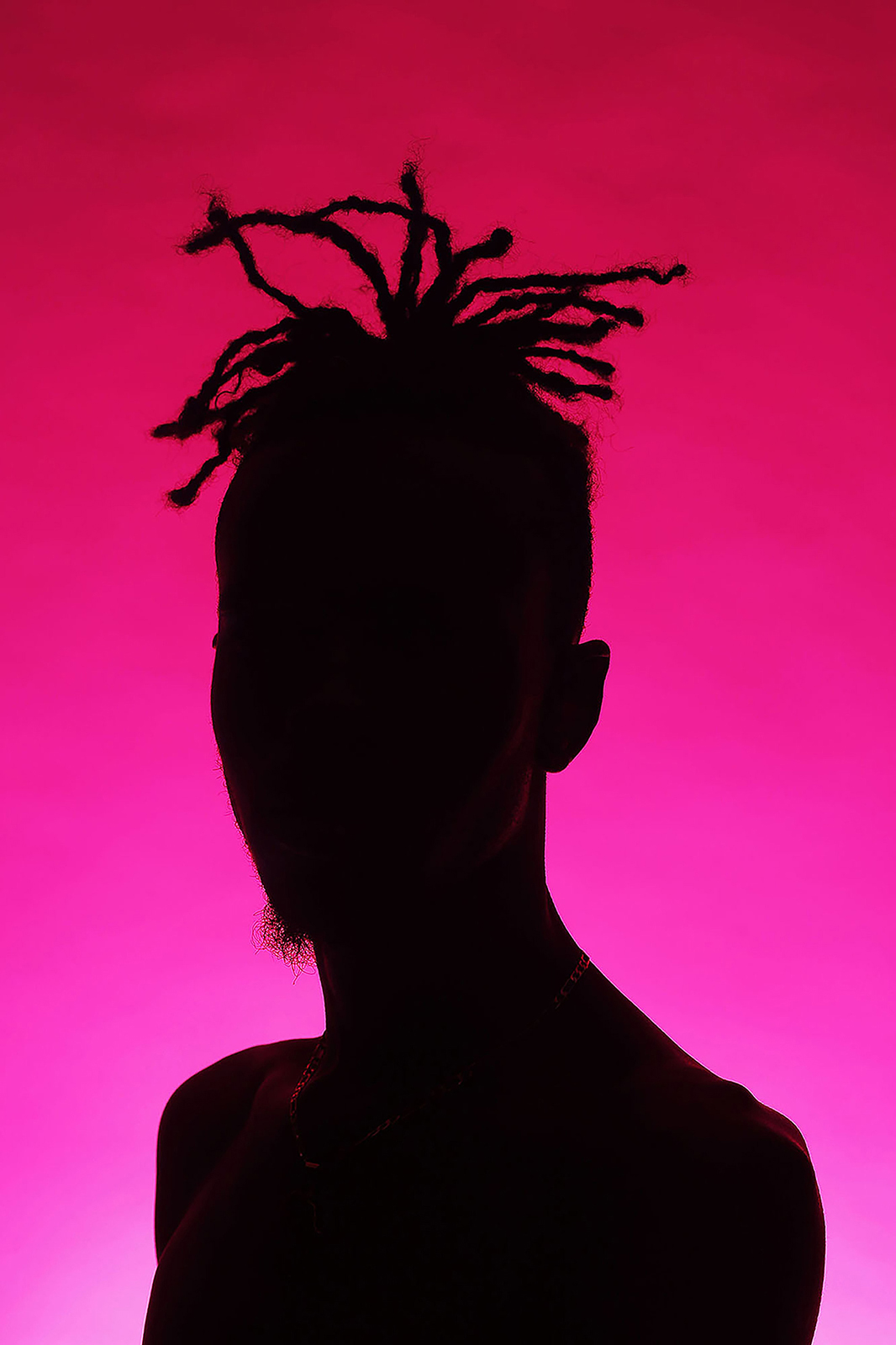 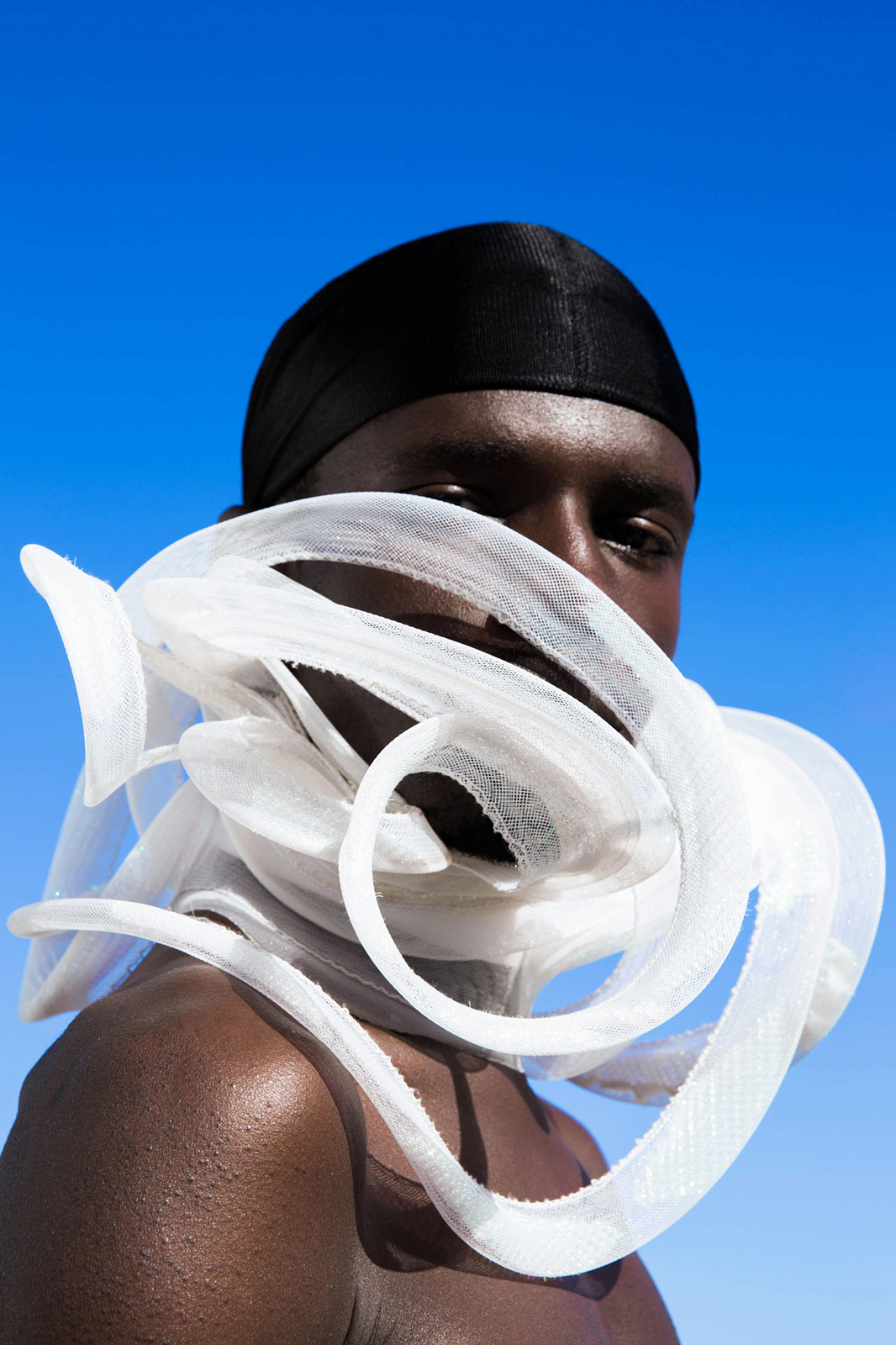 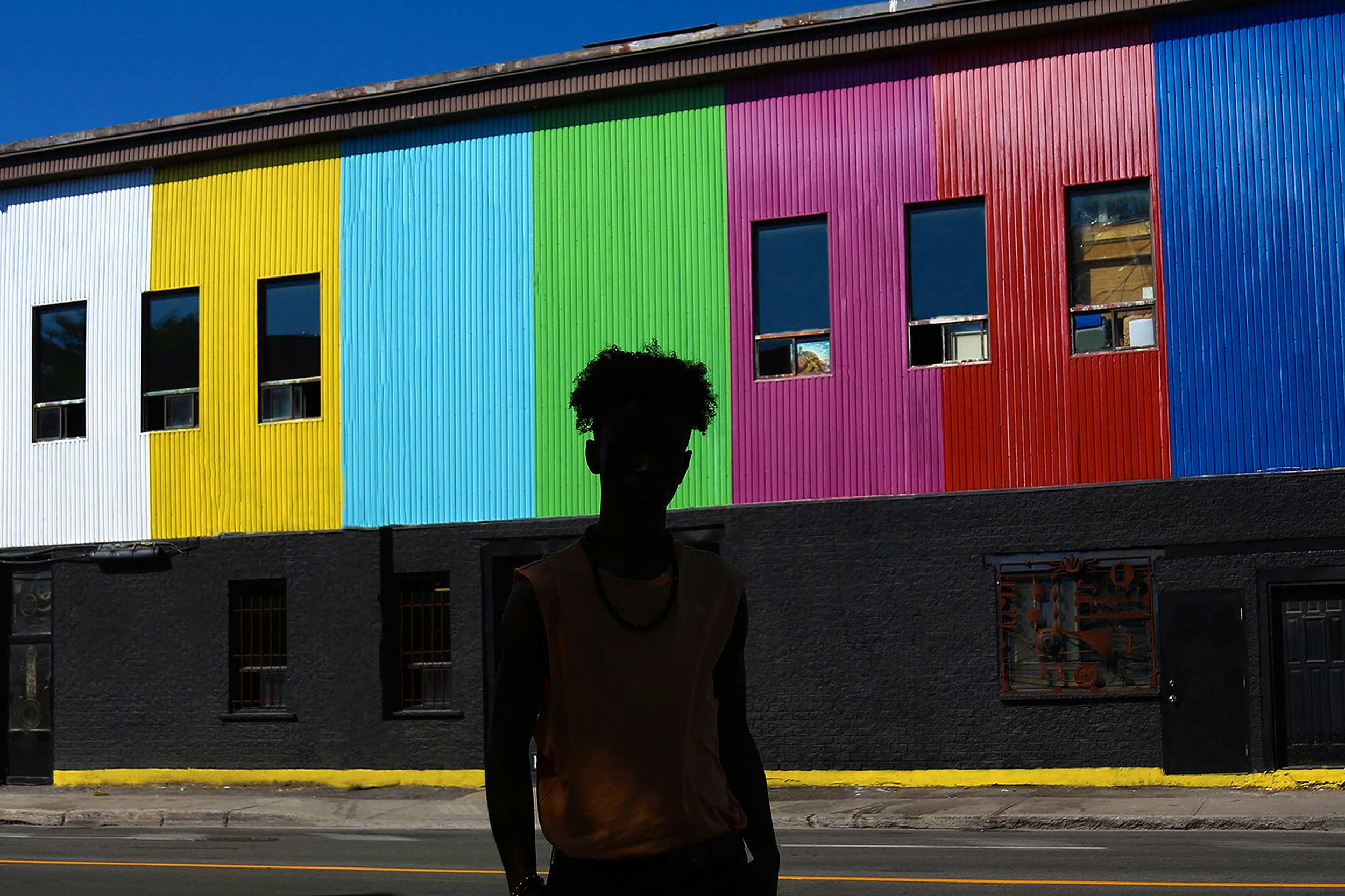