As she releases her EP 'Wasted Youth,' the singer explains why she's always been preparing for the apocalypse

In my lifetime, the western world has never stood still until now. The closest we have ever come to chaos—aside from war on foreign soil and tragedies like 9/11—is during Black Friday sales when people brawl over toasters and low-priced televisions. A pandemic has shut down the world. Money has stopped changing hands. Nobody knows what’s going to happen with the economy and they are worried they are gonna get sick.

I was born a prepper. Christianity is one of the most terrifying religions on earth. From a young age we’re taught that at any given moment, God is coming back. He’ll take the good people and lift them up to heaven in a supernatural event called the rapture, right before he unleashes hell on earth and Satan is allowed to take his vengeance on the remaining sinners. Such wonderful things to tell children.

I was raised to question everything and to be prepared. When you stay ready you don’t have to get ready. In 1999 I watched my mother carefully store containers of matches, water, cans of food, and all sorts of materials for Y2K, so that when it hit, we wouldn’t be in the dark—literally. The grid was supposed to shut down and we would all be without water, electricity, and gas and therefore plunge headfirst back into the dark ages. While most people were celebrating the coming New Year, my family huddled in the basement in prayer. The clock struck midnight. Nothing happened. I was kinda bummed .

I hate to admit it, but in some quirky ways I’m my mother’s daughter. I’m definitely one of those people who explores YouTube looking for conspiracies. I’ve searched for FEMA camps, 5G radiation, Bill Gates’s population control, John F. Kennedy’s big speech, and so much more. I’m a history buff who considers X- Files a documentary. There’s always some truth to be found within Hollywood’s smoke and mirrors.

Even now it’s hard for me to believe that politicians and partisan news networks are giving us the whole truth about Covid-19. If the government is trying to pull the wool over our eyes, it wouldn’t be the first time the people were used as pawns in the global money and war games. The very real tragedy of 9/11 was used to gain public support for the United States’s invasion of Iraq because they had weapons of mass destruction. There were none. Many more young American and foreign civilian lives were lost fighting the “war on terror.” There is so much friendly fire happening that it’s hard to believe anything.

It would be positive if, after this, healthcare becomes universal, power is redistributed, the creation of plastic goods is halted, new laws require cars to be electric and electric cars to be affordable for everyone. So much positive could come of this. Why can I only think of it as the start of the apocalypse? As a chance for governments to up the ante on surveillance, forcing people to wear tracking chips? 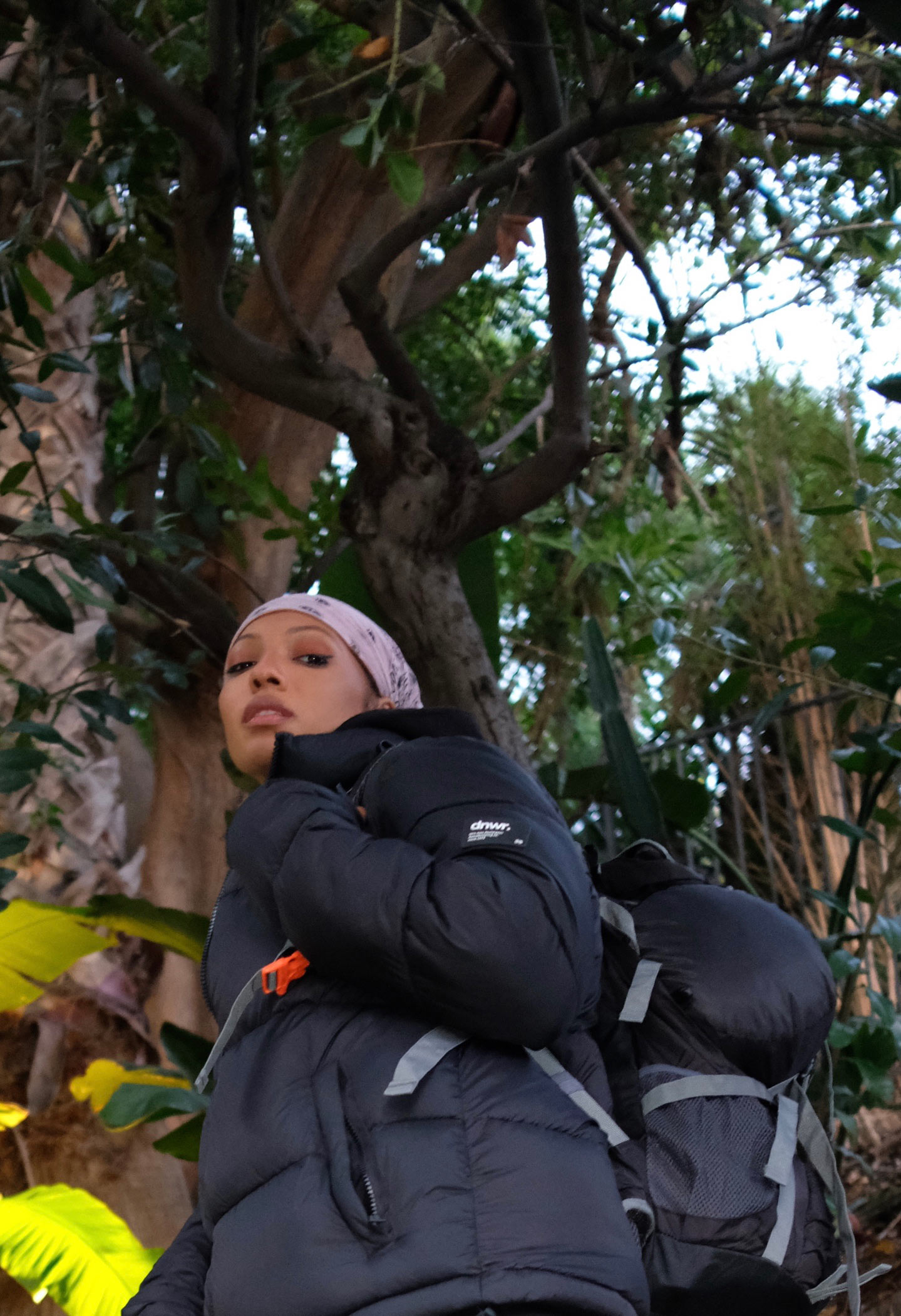 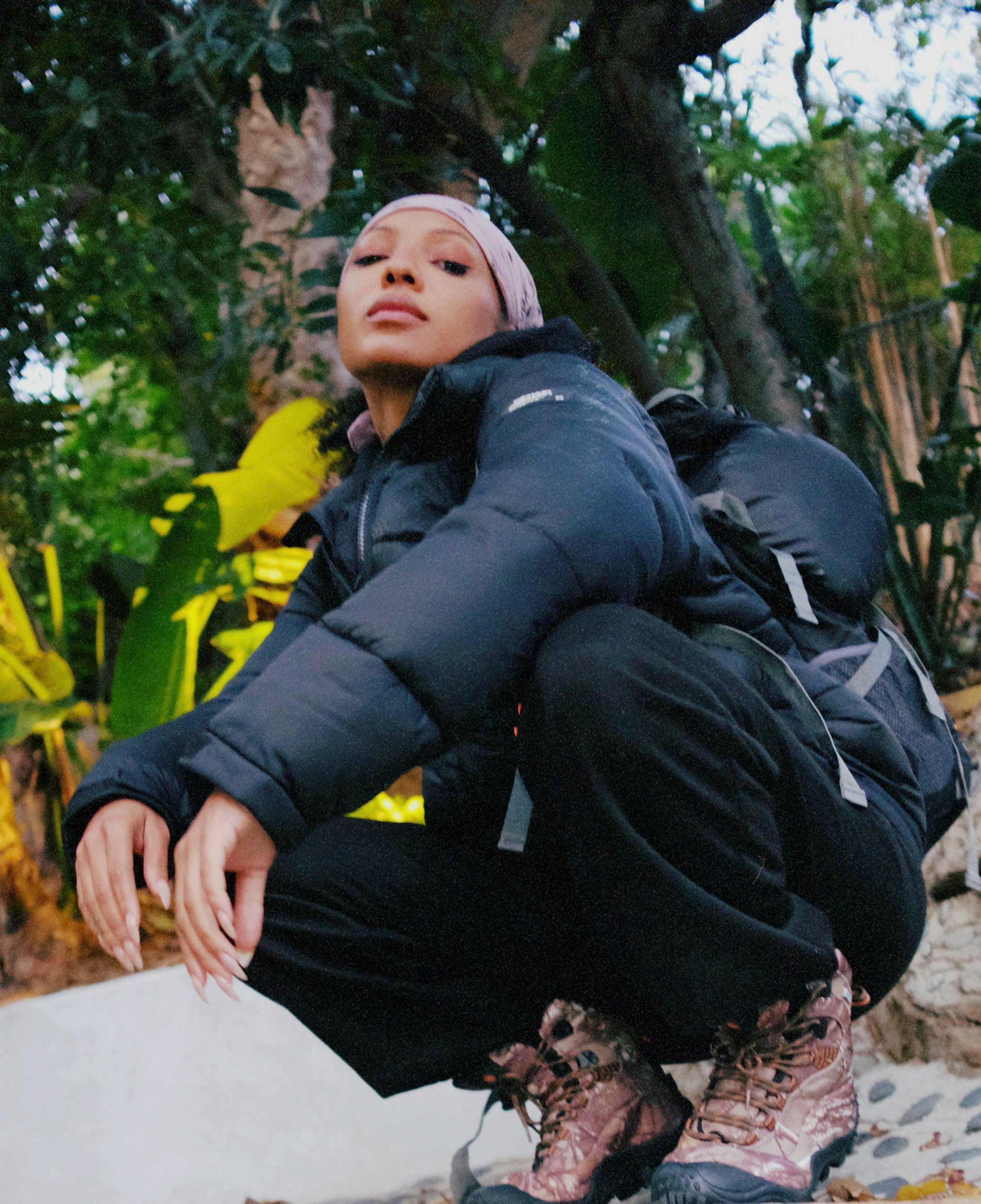 Yes, there is satire in the tone of my words, but I’m also dead serious. I know that at any moment things could change. I grew up in New York City where nobody grew their own food, electricity was supplied by the flip of a switch, and gas and fresh water came from the pipes. We have no actual control of these things.

My prepper anxiety has reached maximum levels. Four years ago I moved to Los Angeles and started collecting materials, should I ever need to bug out or sustain myself and my friends in hard times. My friends are mostly freelance creatives—artists, musicians, managers, painters, and designers—used to living life on the edge. But my view on the subject of conspiracies is too much for them at times. They say things like, “I hear you Diana,” “Let’s just be positive,” “You’re overthinking it.” I’m not though. And when the time comes hopefully I’ll be prepared enough to save us all .

A lot of my gear that I have now is basic camping gear, the lightest and most efficient I could find. Tents that pop open and don’t require much work, first aid kits, dry food in pouches, matches and magnifying glasses, crank lights, ropes, maps, humane traps, heirloom seeds, EMP bags, and an inflatable boat. My favorite book on wilderness survival is Bush Craft 101 by Dave Canterbury. 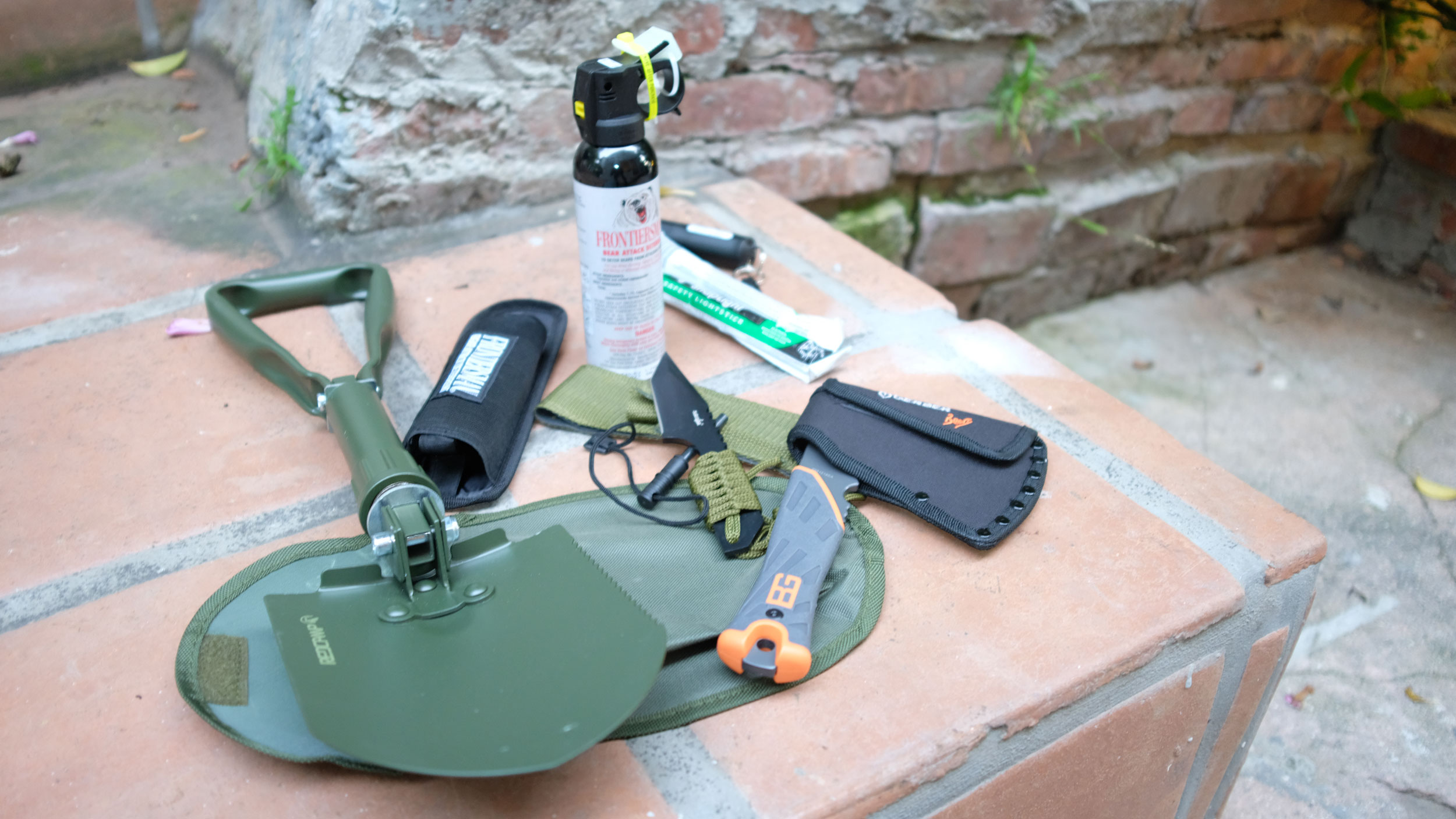 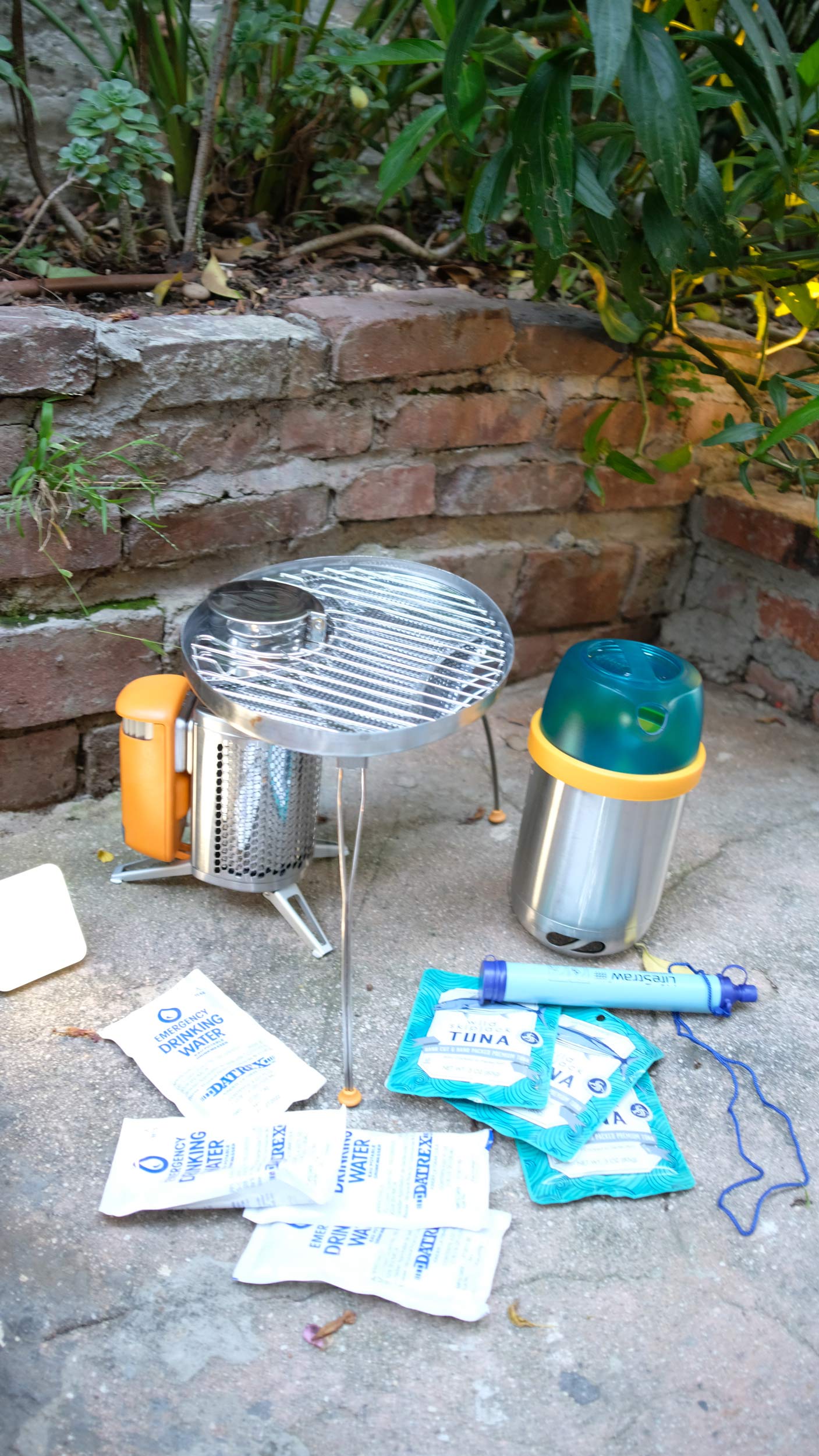 I also discovered BioLite, a company that created innovative technology for outdoor living using renewable energy. I have a lot of their products. My favorite is the stove. It’s the size of a coffee mug and it runs off twigs. When the twigs burn, the heat charges an attached battery pack which you can use as an outside charging source for anything with a USB.

Along with these tools, I have weapons. One has to be able to defend themselves when being attacked. That is the only time I condone violence .

Prepping is a survivalist mentality—thinking one step ahead, thinking outside of the box, hoping for the best but always ready with alternate plans and to travel an alternate route. This thinking can also be beneficial when things are going just fine. Also, it’s not negative to believe that times could be hard someday. To me, prepping is in the same category as buying life insurance, health insurance, and a retirement plan. Preppers are some of the most responsible people on the planet, and I’m proud to be part of the community. 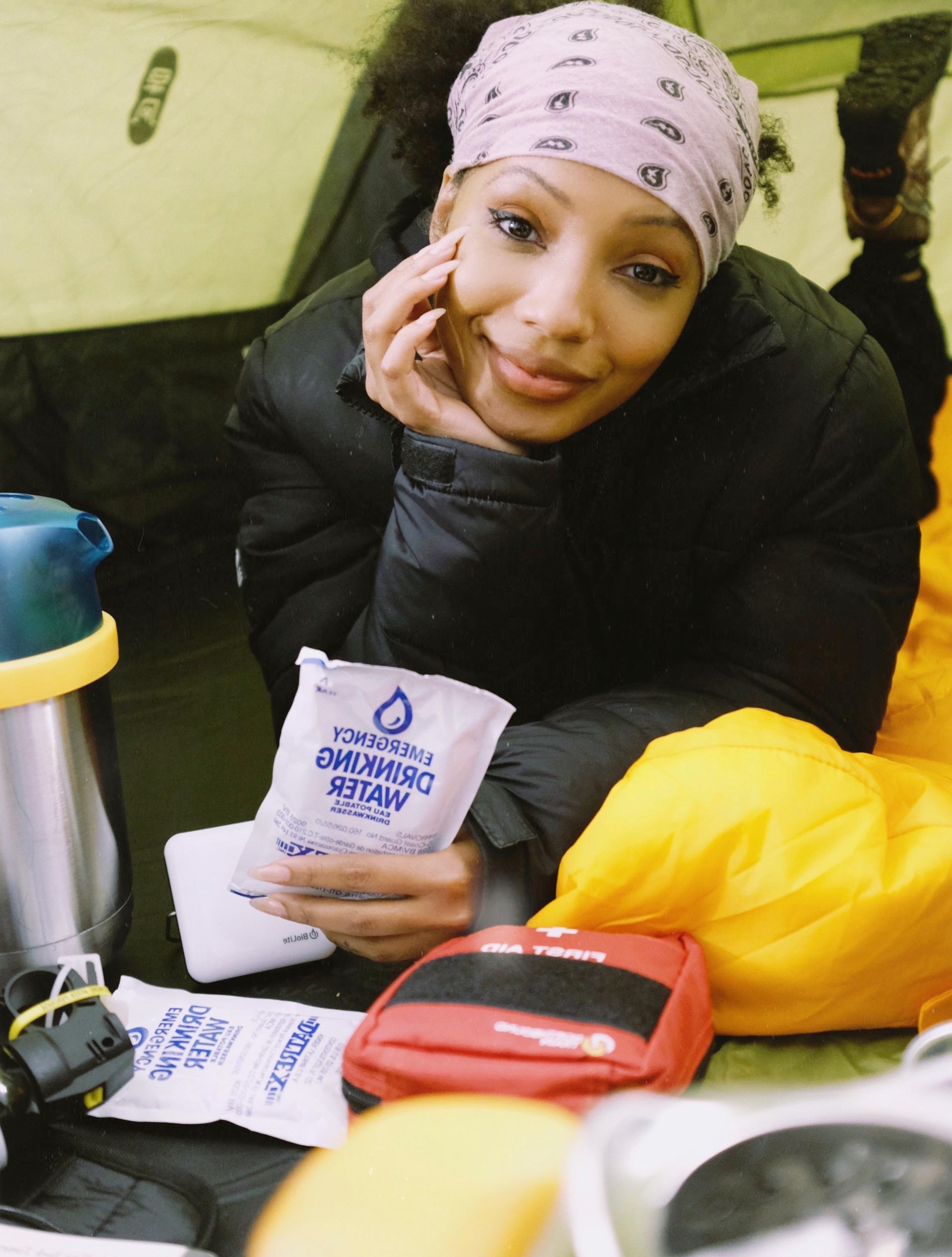