Interview and translation by
Clarisse d'Arcimoles

'This is the Senegalese power': Photographer Toby Coulson captures the designer's stunning creations

If you come up in Senegal, and you’re at all interested in fashion, Oumou Sy is one of the first figures you familiarize yourself with. Hailing from a northern region of the West African country, the fashion designer, early internet pioneer, and theater entrepreneur is the costumer of choice for the nation’s music and art elite. Between costume design in film and haute couture that’s sold the world over, Sy is a consummate businesswoman and a Senagalese staple.

Sy was gracious enough to delve into her time in art school, early career in cinema, and her experience working with other Senegalese giants like director Ousmane Sembene. Her life story demonstrates how to be both immersed in one’s culture and willing to go against certain currents, ultimately paving a singular path. 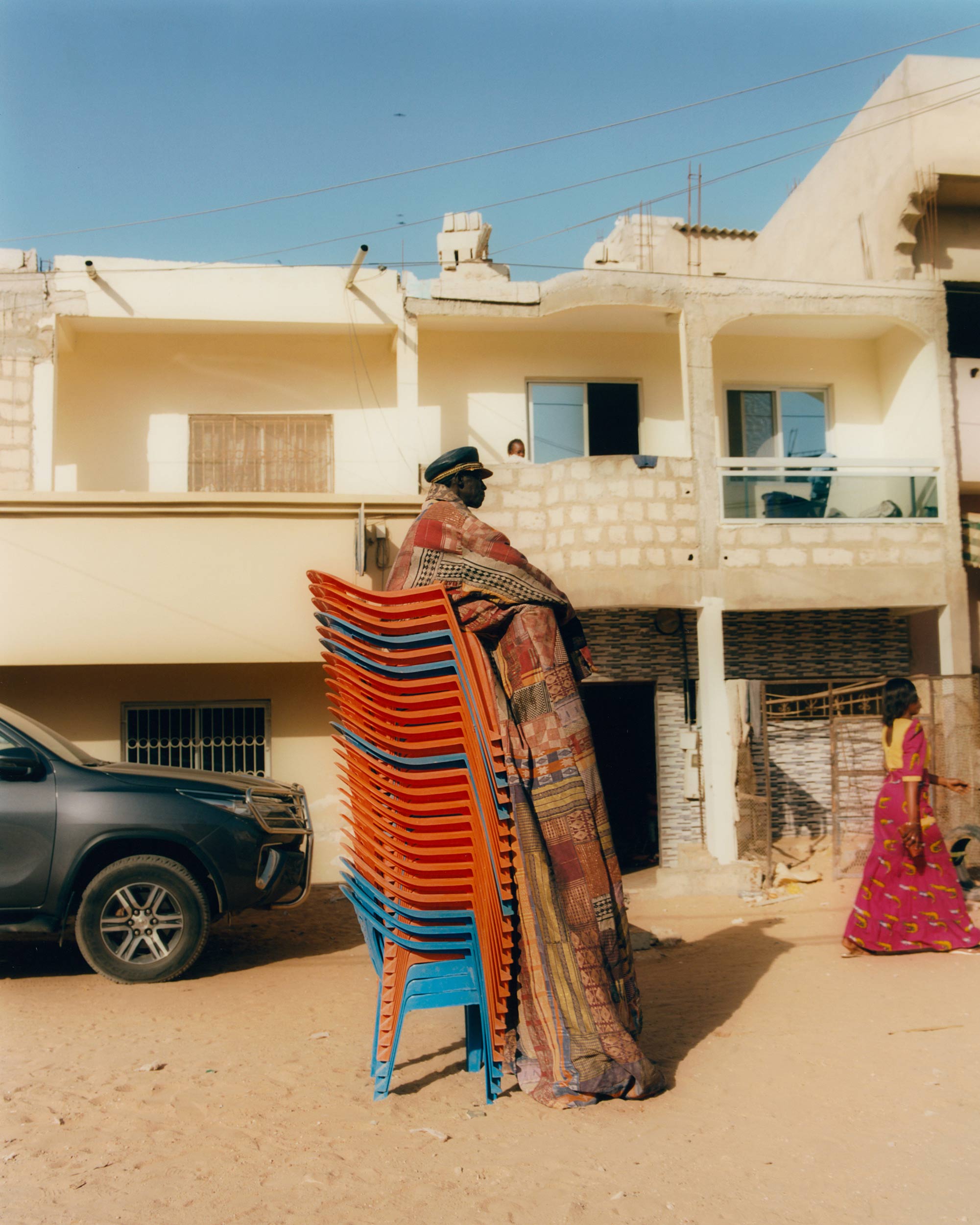 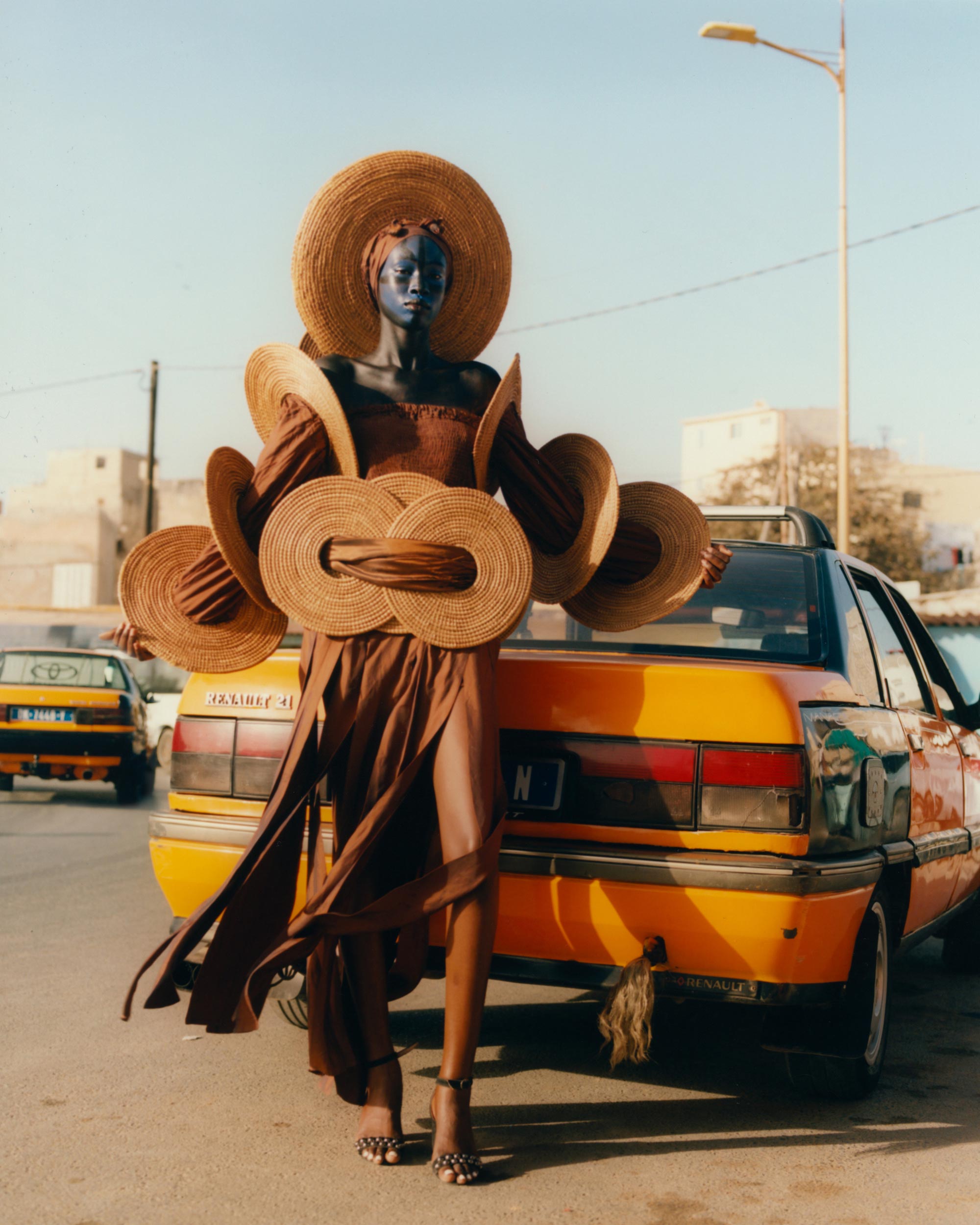 Document: Can you tell us when you first became interested in fashion and costume design?

Oumou Sy: I was born in Podor, a haven of peace on the river in the northernmost point of Senegal that borders Mauritania. Women in my tribe have only one purpose: to get married, be pretty, and stay silent. When my dad died, I felt all his force come into me. At the age of five I was no longer a child, at the age of 9 I refused an arranged marriage, at the age of 13 my mother bought me my first sewing machine and I started using recuperated fabrics. I wanted to be independent, if you are a woman, financially self-sufficient, and you can provide for your parents, people would not bother you, and you would be respected.

Document: You’re often referred to as ‘Senegal’s Queen of Couture’. What, in your opinion, gained you this royalty status?

Oumou: People can say whatever they want, I don’t see myself as the queen of couture, fashion, [or] the queen of anything actually. I simply create clothing; people can call me anything, I just carry on. Only God knows if I am a queen. Anyone can be a queen in their own field.

Document: You have collaborated with multiple artists and worked within many different mediums throughout your career. Can you tell us a little about this?

Oumou: I always liked to work in multiple fields with different people. I gather what I am thinking of at the time and what I am dreaming of.

I came to Dakar in 1989 to study Art and got introduced to wonderful Senegalese artists back then. I started working in the cinema industry with the very first Senegalese movie maker Ousmane Sembène and then of course with Djibril Diop Mambéty on his movie Hyenas.

I was the pioneer of the internet in all of West Africa and realized its potential to creatively organize events. In 1997, I created the first fashion week in Dakar called SIMOD and the carnival of Dakar, an annual parade of costumed dancers and musicians. 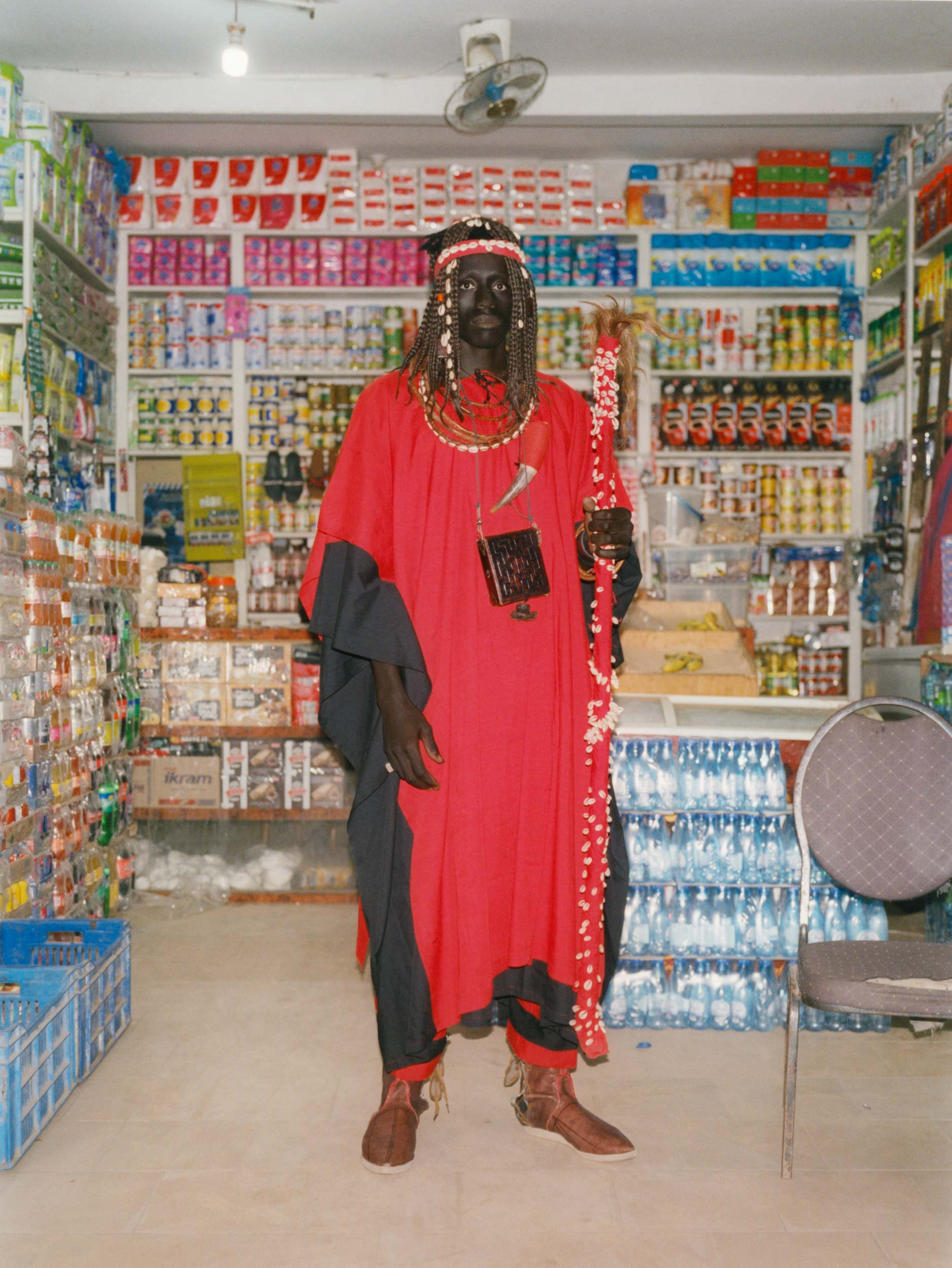 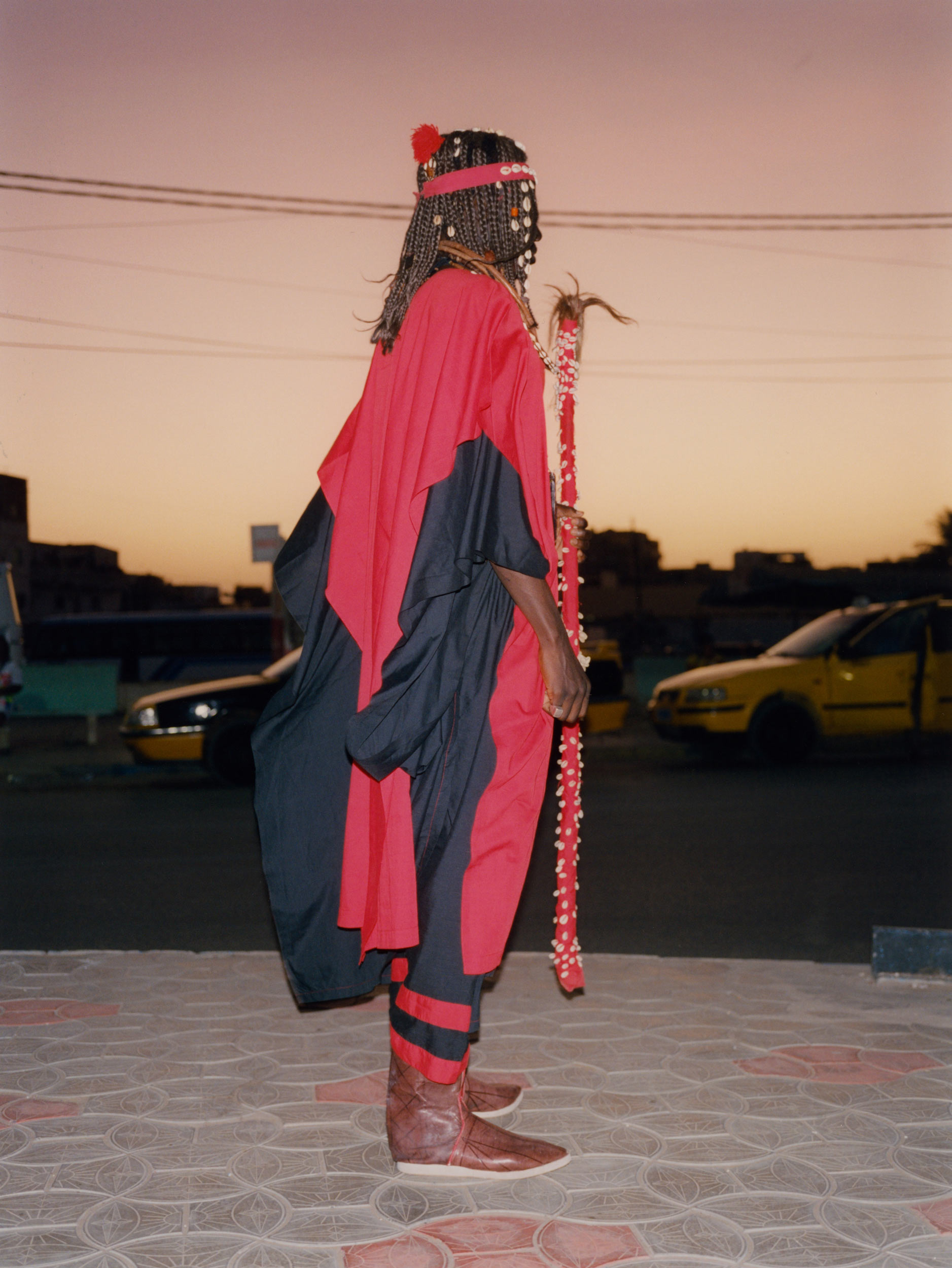 Document: You have a distinctive choice of materials; could you describe it?

Oumou: I take what I can and make it my own. I enjoy working with different materials, things that surround me, that I come across in my everyday life. I’m a self-proclaimed hunter and gatherer of things; I look for natural elements to work with [such] as plants, herbs, barks, and natural dyes, using either traditional or modern techniques. I choose a material and look for a way to highlight it. I’ve never learned to read and write, and so my fashion is the most important vessel for the expression of my creativity.

Document: What are your inspirations?

Oumou: Inspiration is everywhere; it is in the air, and everybody can breathe creativity.

Document: The Senegalese fashion scene isn’t as well known internationally, how would you describe it? What makes it special and sets it apart?

Oumou: The youth in Africa express themselves through their style and clothing.

Fashion in Senegal is part of everyday life; Senegalese love to dress. Senegalese women want to be elegant and pretty. How you look is important, especially how to enhance their beauty to others. It is fundamental to like the way you look. This is the Senegalese power. 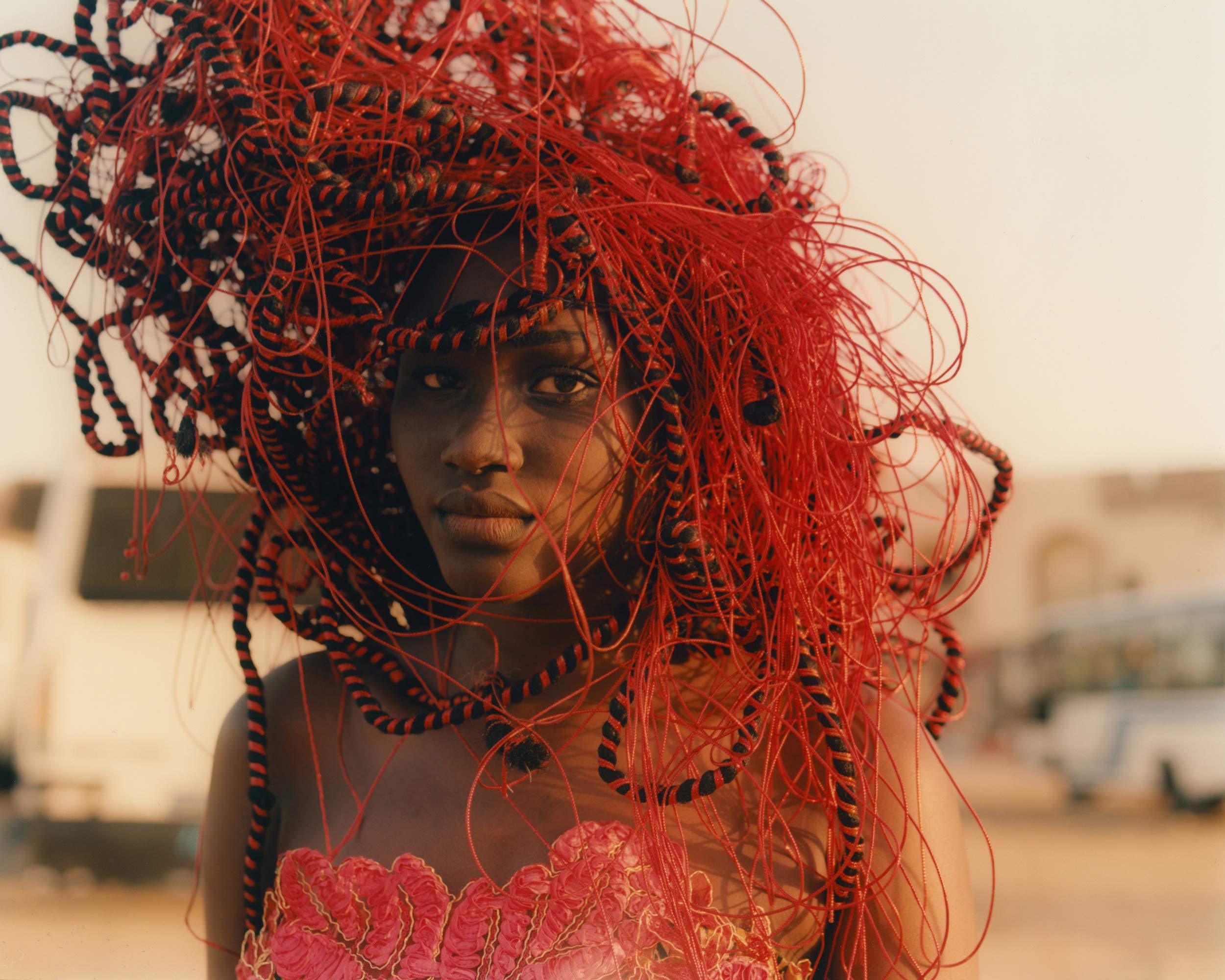 Document: It’s clear how a huge amount of thought and work goes into each of your creations, from concept to craftsmanship. Is there any piece, across your career, you’re particularly connected to and why?

Oumou: I don’t like one creation more than others, I like them all; they are all inspiring to me. For example, the giant patchwork coat is a tribute to Issa Samb also known as Joe Ouakam, an incredible Senegalese painter, sculptor, performance artist, playwright, and poet. When he was a boy, he was cycling all over Dakar; he actually was the first cyclist of Senegal! His work was outstanding, he was a friend of everyone. I got introduced to [him and we] became really good friends, and I started designing his coat using patchworks. When He died in 2017, I wanted to pay him tribute by creating a giant coat.

The red dress was created for the art biennale; I always do new creations for the biennale and the theme that year was animal of the forest, so I went for one of the biggest animals in Africa: the Anaconda, which is the animal that is giving birth to the most babies in the world.

Document: Lastly can you tell us how you have been dealing with the lockdown are there positives you can take from it?

Oumou: Staying home has been really inspiring, being with my family but also doing things I usually would have never had time to do, such as sort out my beads for example. It’s very meditative. But everyone at home needs to be very welded, actually, the whole world needs to be welded to fight this invisible enemy. 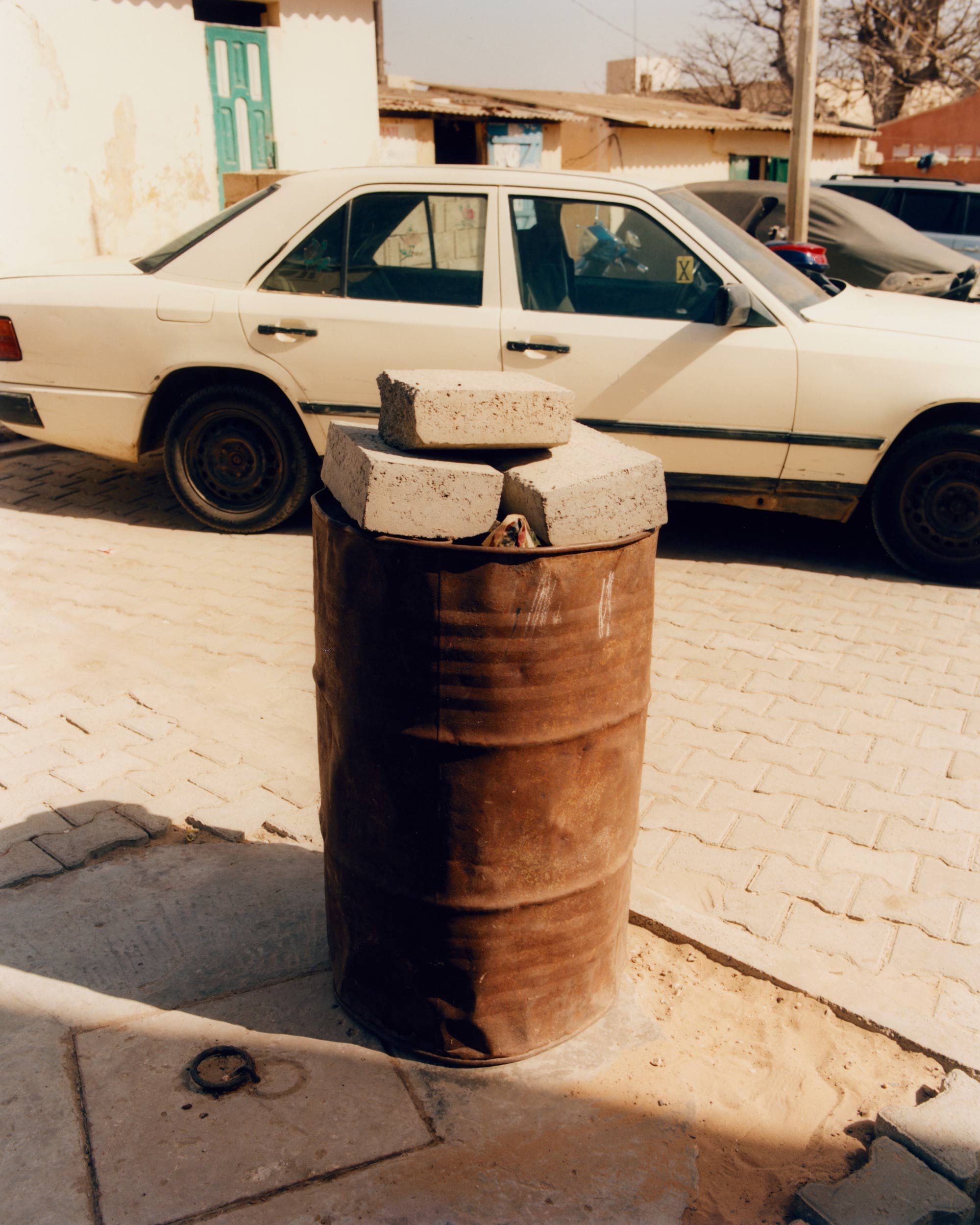 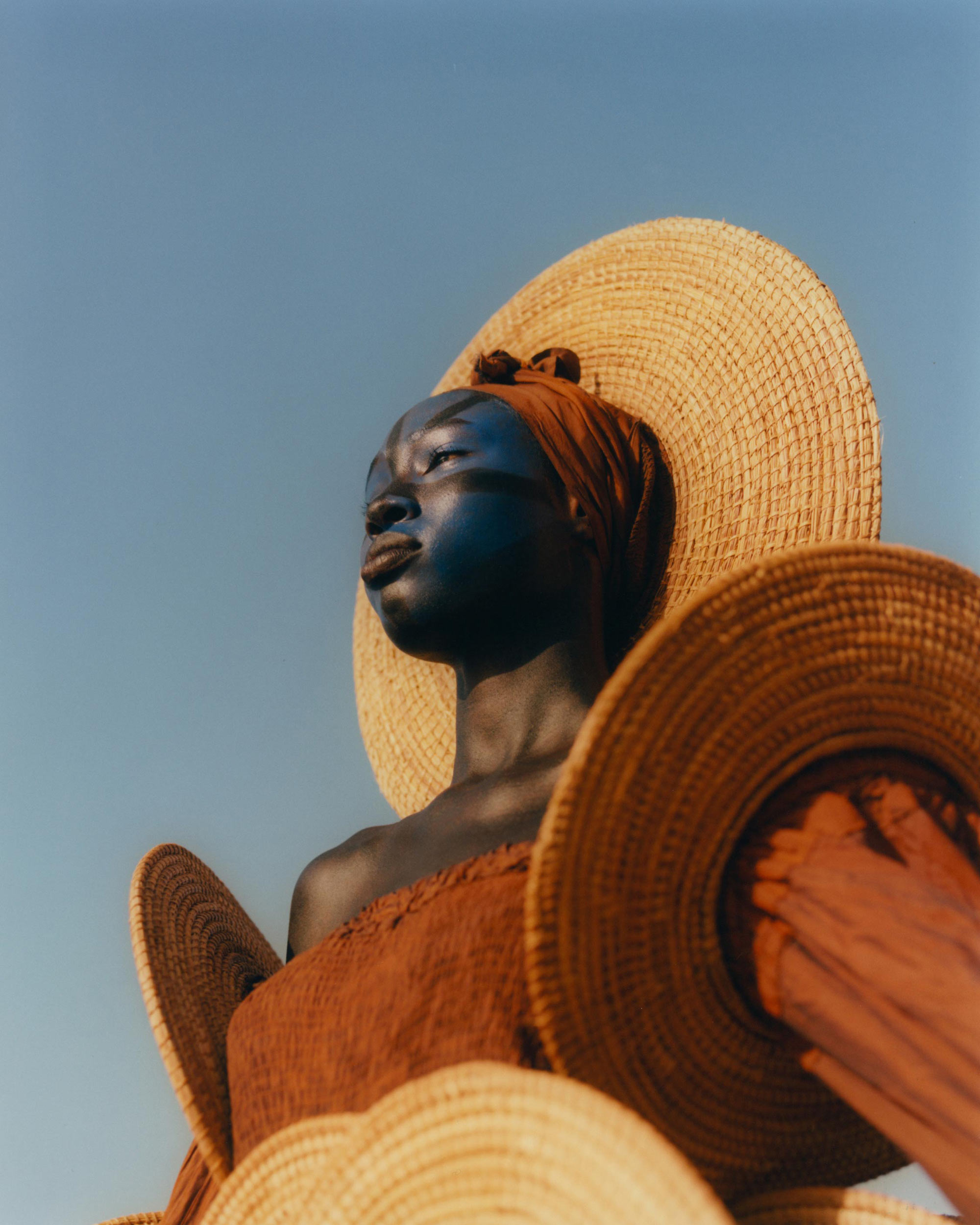 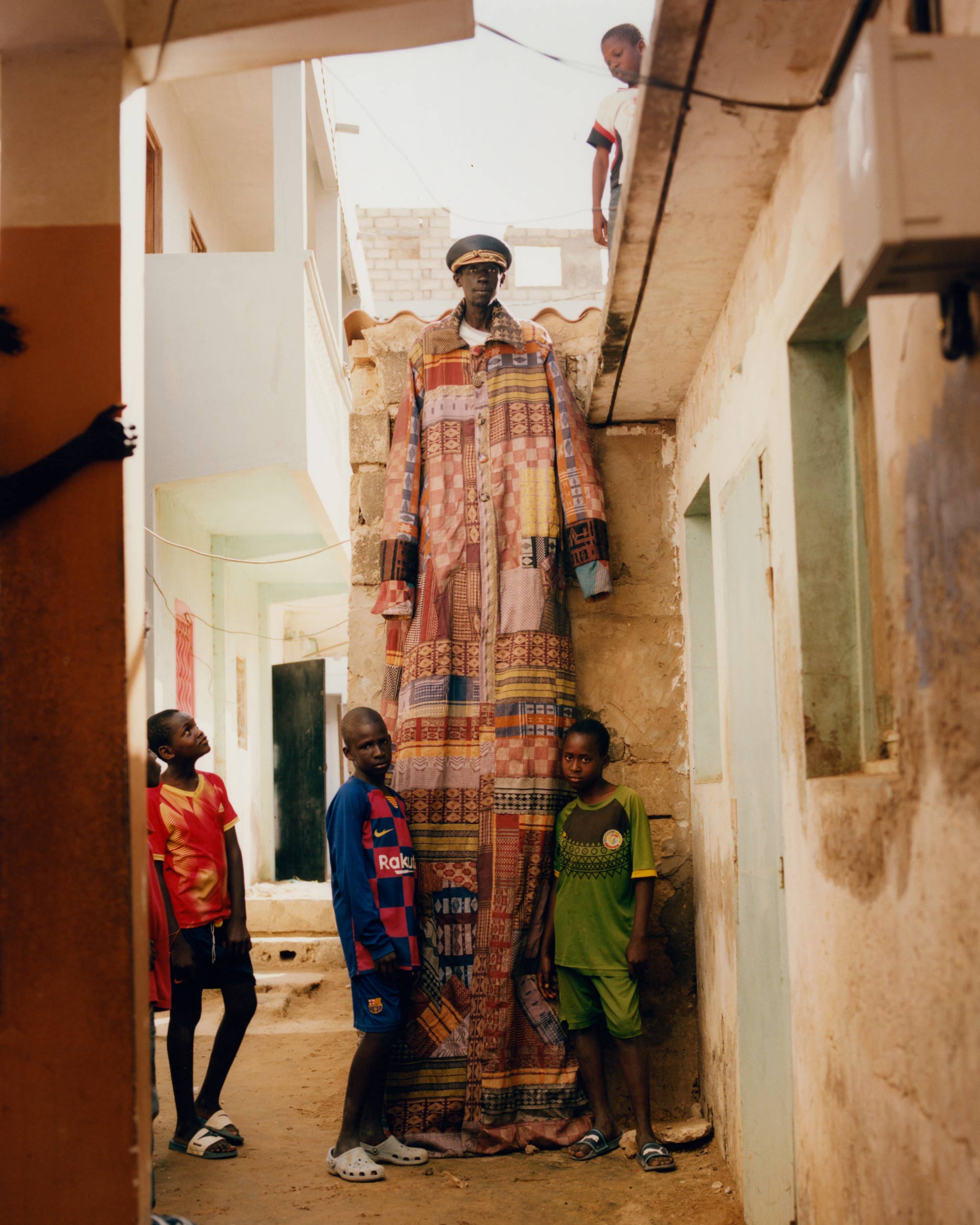 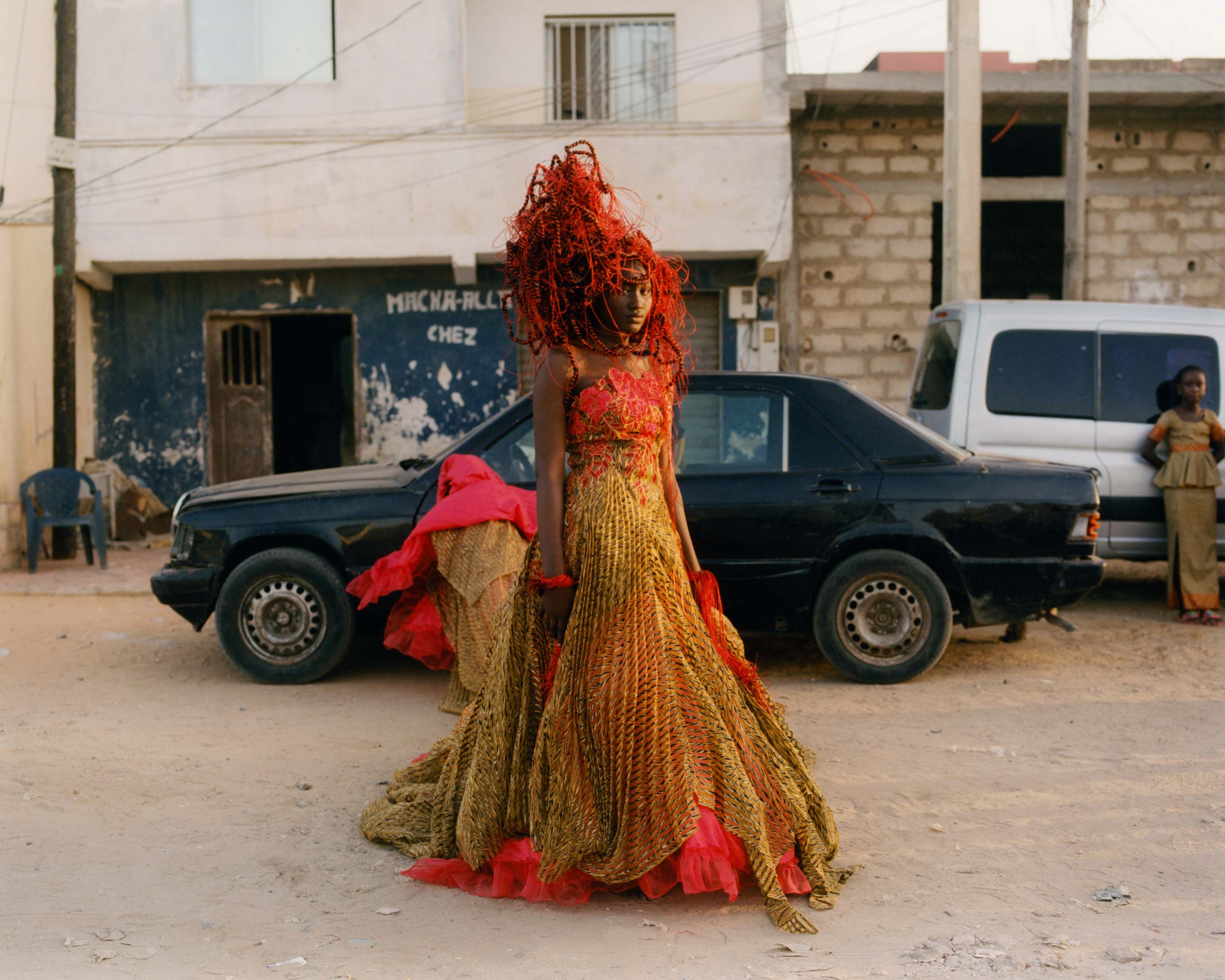 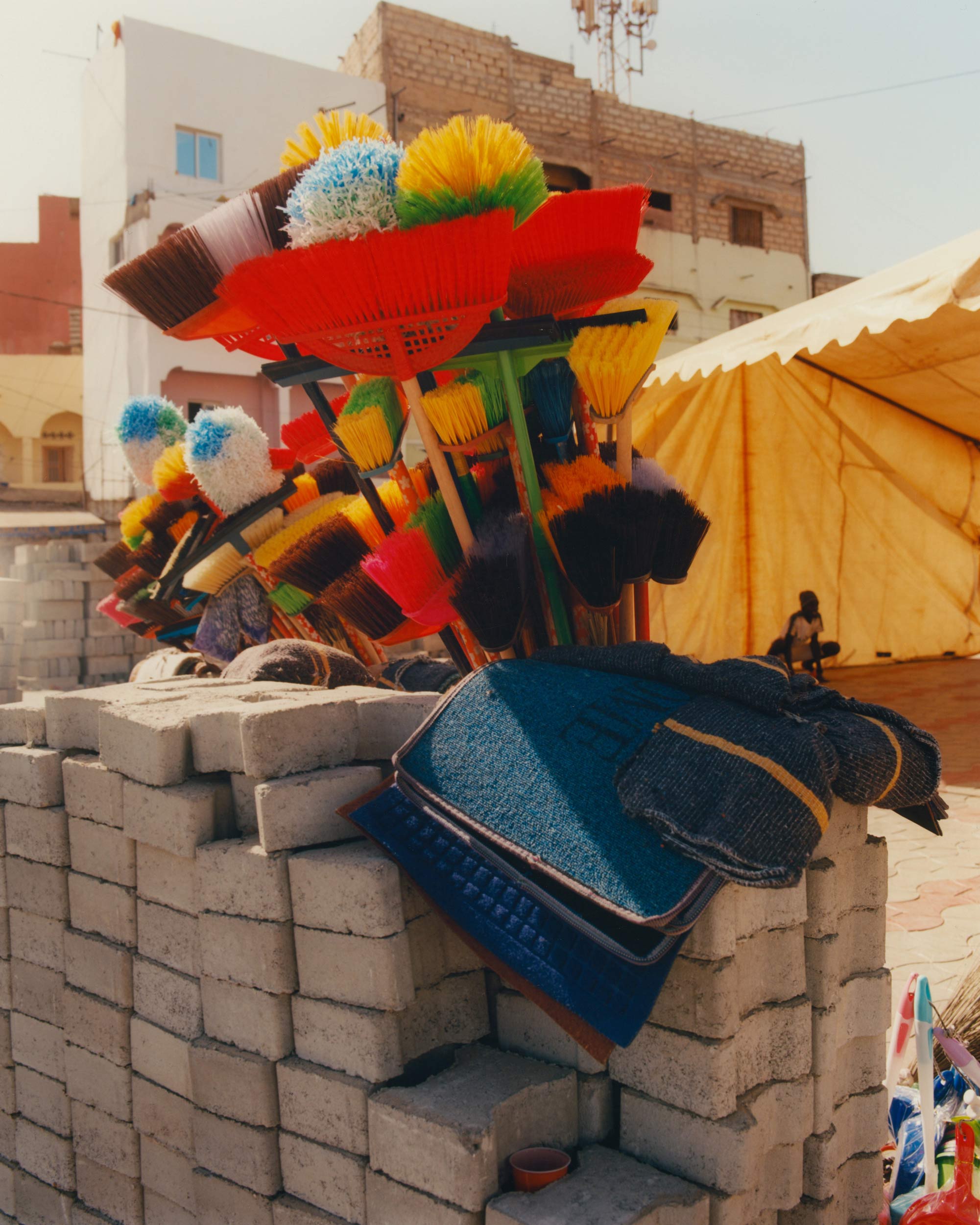 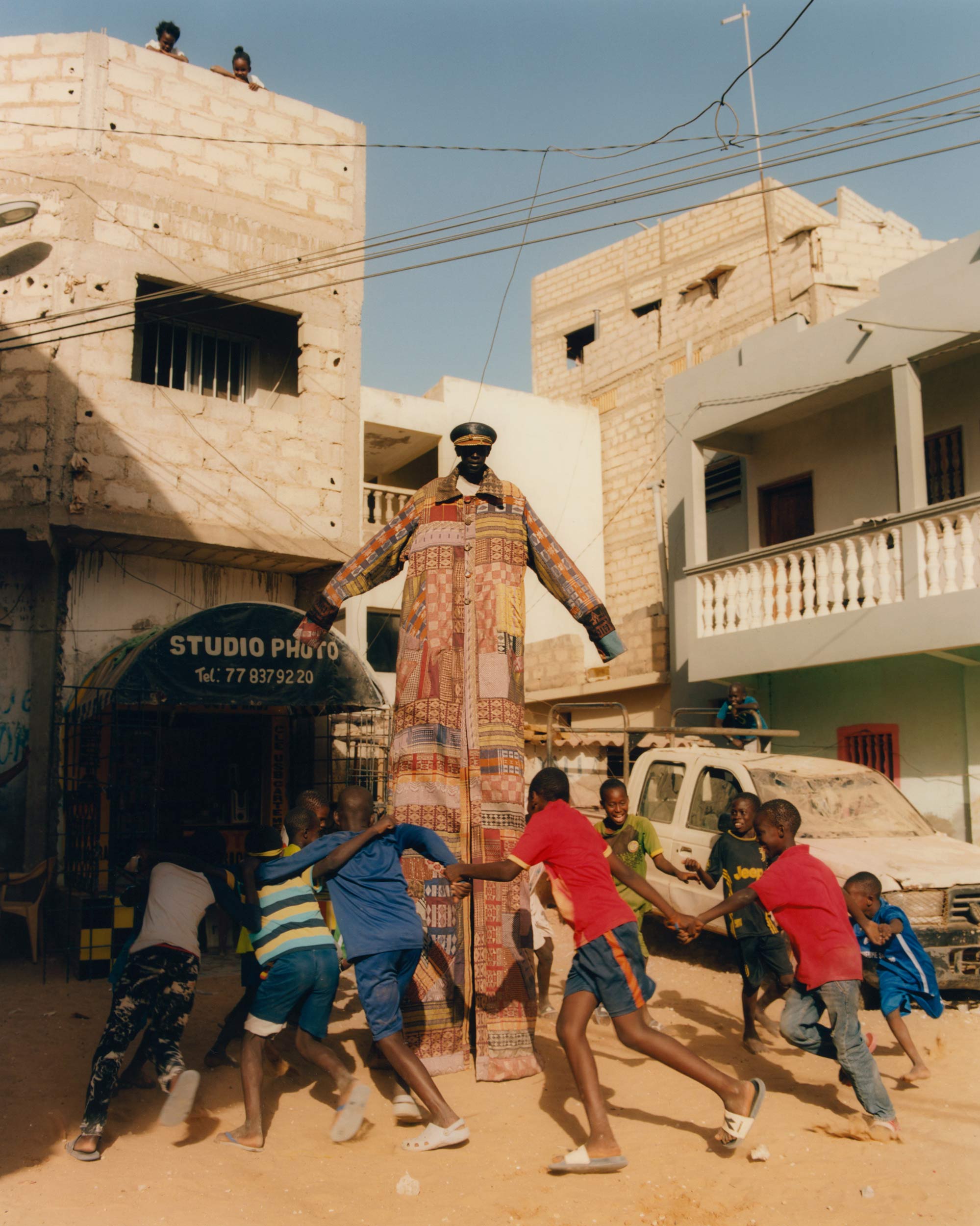