50 years after Anna Karina joined a convent, nun movies are a study in feminist storytelling for our increasingly cloistered world.

In 1942, Simone Weil wrote in a letter that her devotion to the Church was a precarious affair because of the tension between the strength of her faith with her concerns about being cut off from it. “What is purest and what is most defiling look very much the same,” wrote the legendary philosopher and activist, then 32 years old, “and confused under the same words, make an almost indecomposable mixture.” Weil’s struggle reveals a position that many religious women might occupy, when no matter how profound their devotion might be, they are confined to the margins of organized religion, and perhaps even more so, they are dogged by the fear of sinning and losing favor.

A microcosm of this conflict plays out in the convent, where Catholic women can find a like-minded community and even positions of authority. The relationship between nuns and feminism has been stronger than one might expect—some of the earliest proto-feminist literature came out of medieval convents, and they were a refuge for single women or those who wished to be educated for hundreds of years. A 2015 New York Times article suggested that in our unstable times, there may even be a renewed interest in women’s religious orders among millennials seeking stability, community, and service.

Our public fascination with these women-only spaces has spawned dozens of iconic representations in popular culture, many of which explore and reveal complicated beliefs about gender in the Catholic tradition. In fact, movies about nuns have provided some of the juiciest roles for women in film and have been used as scathing critiques of the Church. But they also reveal our fears and fascinations with women and sinfulness, and our proclivity for viewing matriarchal power as problematic. Ultimately, even films that are critical of the Church reinforce its traditional views about women and imagine women as the downfall of men. They explore the fine line between faith and corruption that Weil lamented—and make sinfulness out to be women’s problem, in particular.

At the height of their popularity in the 20th century, there were approximately 181,421 Catholic sisters in religious orders across the United States. That was in 1966—the same year that French New Wave iconoclast Jacques Rivette directed his controversial picture La Religieuse, or The Nun, starring Anna Karina. The Nun is loosely adapted from Denis Diderot’s novel of the same name and follows Suzanne, the illegitimate daughter of a wealthy family, who is forced to become a nun without a husband or inheritance.

In the 18th century, the convent could be a haven for unmarried women without money; it was somewhere that offered the opportunity to read, to listen to music, to be in community, to have stable housing and meals, and to attain some social mobility (in The Nun, Suzanne’s Sisters undauntedly dole out orders to her wealthy parents). Suzanne bonds with her first Mother Superior—Mme de Moni—a surrogate maternal figure who embodies the women-centric solidarity and kinship of the nunnery, and makes the designations of Sister and Mother feel more real than Suzanne’s relationship to her biological family. But after Mme de Moni dies, Sister Sainte-Christine takes her place and isolates Suzanne, leading the other sisters to believe that Suzanne is mad. Suzanne petitions for release from religious orders, but is refused, and instead, she is transferred to another convent led by Mme de Chelles. She takes a shine to Suzanne, which quickly devolves into an aggressive crush. Throughout the film, Suzanne is desperate to reconcile her faith in God and her mistreatment in the nunnery.

The Nun gives a window into two different matriarchal enclaves, but neither of them seem ideal. One Mother is power-hungry and cold, while the other is warm, but driven mad by desire. Suzanne’s saving graces are her lawyer, an empathetic exorcist, and a monk—creating a system in which heroic men save her from evil women. The Nun critiques the polarizing options available to women in Suzanne’s circumstances (the convent or sex work) and in doing so decries women’s lack of agency and their reliance on men to survive. However, it fails to thoroughly acknowledge the complicity of patriarchy in this dilemma; by making women the source of Suzanne’s suffering, the misogynistic structures of the Church and French society go mostly unscathed. 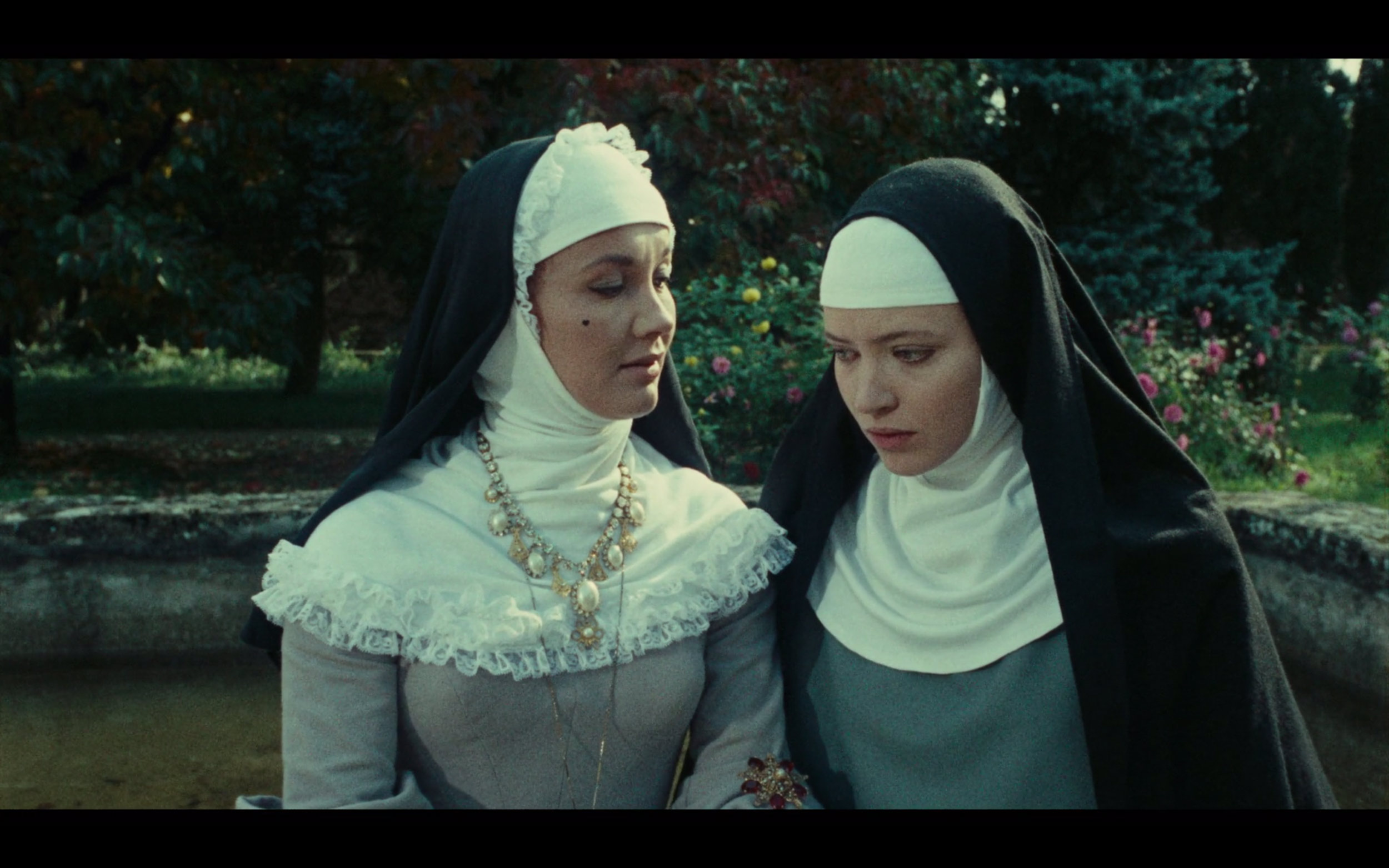 Like The Nun, 1947’s Black Narcissus is a formative entry in the canon of nuns on film—but it too portrays women as easily corruptible and dependent on men. When Sisters Clodagh, Briony, and Ruth are sent to the Himalayas to establish a convent, at first they seem authoritative, confident, and fearless. The film follows the erosion of their faith, fueled by a colonial portrayal of ‘the East’ as a site of transgression. Temptation comes in the form of local British agent Mr. Dean, who mostly appears on screen shirtless and in scanty shorts, to help the nuns with construction and safety. During a storm, Sister Ruth swaps her habit for lipstick and a billowing blouse, and attempts to seduce Mr. Dean and kill Sister Clodagh.

Black Narcissus was groundbreaking for its acknowledgement of female sexuality—even though that desire was conflated with madness. The film is about a group of women, but more precisely, it is about that group of women’s obsession with a man, and their propensity to be ruled by instincts rather than intellect. Just as Eve’s curiosity was blamed for the Fall of humanity, in Black Narcissus, women are feeble and men are stable.

‘Nunsploitation’ reached a fever pitch in 1970s Europe and Japan, along with women-in-prison films, revealing a public fascination with stories about isolated groups of women turning to sexual ‘perversity.’ While some films attended to feminist concerns, most relied on voyeurism, masochism, and the fetishization of lesbians—playing into the fantasy of the ‘good’ girl who goes ‘bad.’ Even if the plots were not explicitly sexual (another favorite motif was mass murder), film audiences were interested in seeing women shirk their principles and duty to reveal something sinister and untrustworthy lurking underneath.

On the opposite end of the spectrum is Joan of Arc, a rare figure beloved by Catholics and feminists alike. Joan’s story has been translated for the screen almost since the dawn of commercial film, beginning with Cecil B. DeMille’s 1916 Joan the Woman. She has been portrayed by some of film’s most iconic actresses, including Ingrid Bergman, Jean Seberg, and Sandrine Bonnaire.

Joan challenged the idea that communion with God was exclusively for men, and legitimated the validity of women’s visions, voices, and right to authority. Her devotion is performed differently in each film adaptation—for example, Renée Falconetti’s heart-wrenching, melodramatic performance in The Passion of Joan of Arc (1928), versus Florence Delay’s completely stoic, matter-of-fact turn in Robert Bresson’s The Trial of Joan of Arc (1962). Despite the range in performances, both films take their script from the real minutes of the 15th century trial, during which Joan bravely told clergymen that she served God first, not them. The filmmakers allow us to see the possibility that Joan’s faith exists outside of the organization of the Church, and by extension, its edicts of gender. Seeing Joan as heroic, however, requires conceding to expectations that she present herself as a man. Her power taps into the well of masculinity as a signifier of strength, not to mention the fact that she remained a virgin. As such, she avoids the stereotypical traits of femininity—like weakness or sexuality—that jeopardize the depiction of other religious women. Nunsploitation gives its female protagonists some opportunities to question patriarchal structures, but still falls back on them as an organizing framework. The story of Joan of Arc has been used to undermine these ideas, but might reject all signs of femininity in order to do so. 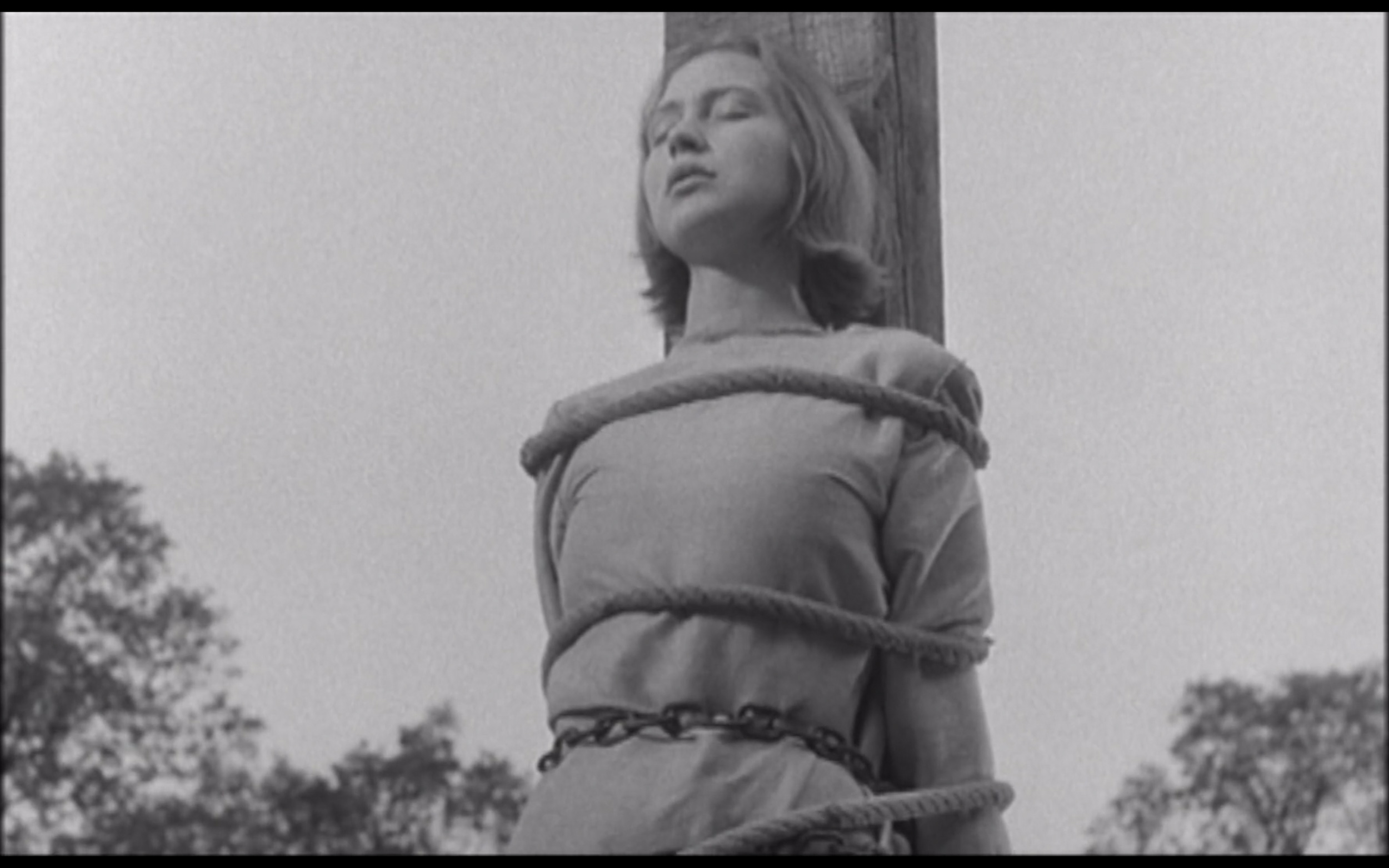 18 years after The Nun, Rivette devoted a two-volume, five-and-a-half hour epic to Joan of Arc, entitled Jeanne la Pucelle. Bonnaire expertly plays Joan as uncompromising, forthright, and fearless, but also vulnerable and kind; instead of presenting these traits as oppositional, they co-exist. Jeanne la Pucelle is the rare example of a film about a religious woman who seems uninterested in performing any kind of binary, stable gender expression—her commitment is only to her cause, and not to social expectations. Whereas Rivette gestured toward sexism in The Nun, he explicitly acknowledges it Jeanne, making for a truly complex portrait of a young woman bound to her belief.

Cinematic representations of women in Catholic structures remind us that women’s devotion— to a God, an idea, or even to themselves—may still be considered threatening or dangerous, in the view of society, and sometimes to the filmmakers themselves. Despite the opportunity for fertile feminist storytelling, nunsploitation has still been more attentive to the faults of religious women than to the biased systems in which they operate. Nonetheless, the genre continues to expand and to challenge what we think we know about gender, religion, and our culture’s collective understanding of both. 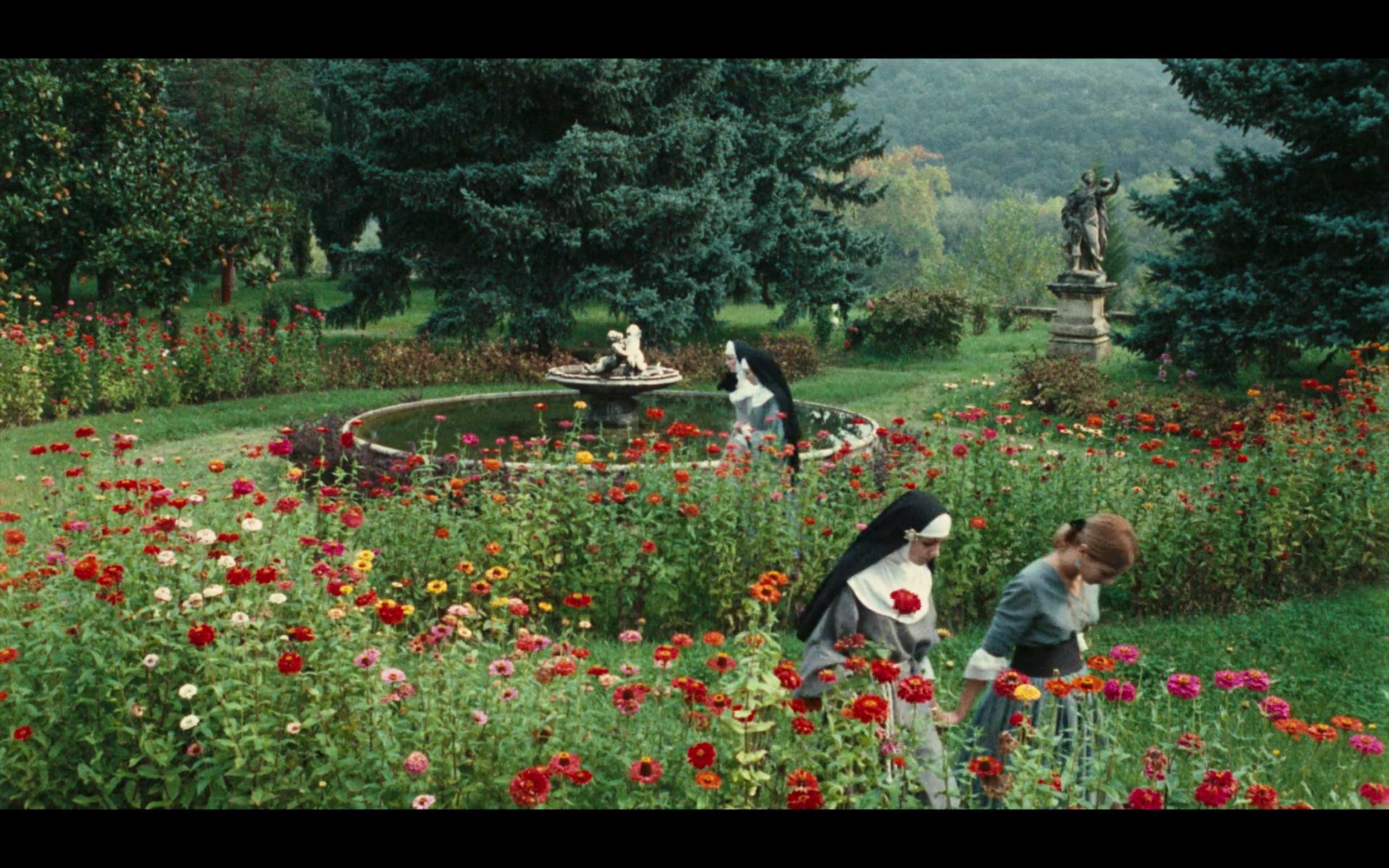 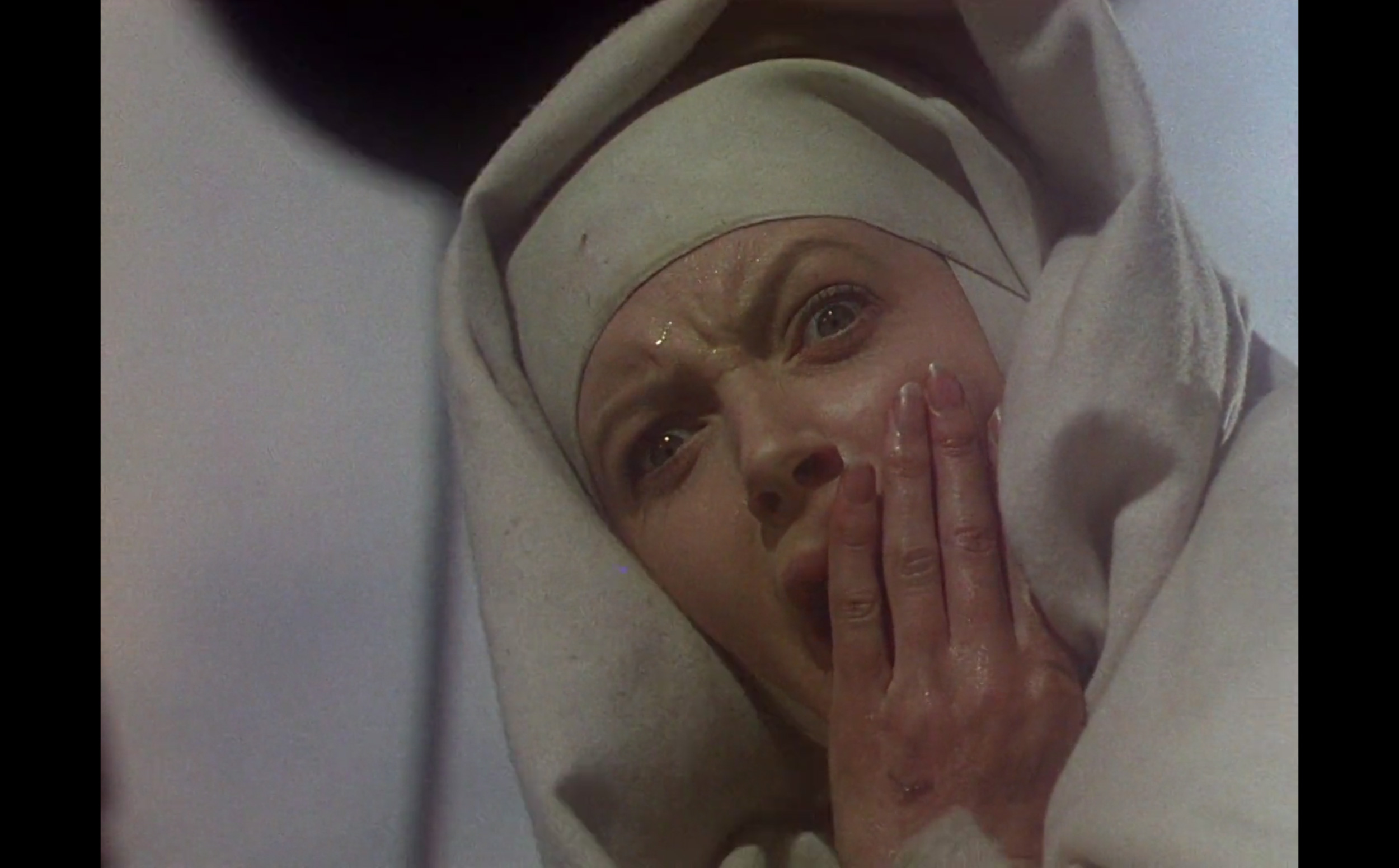